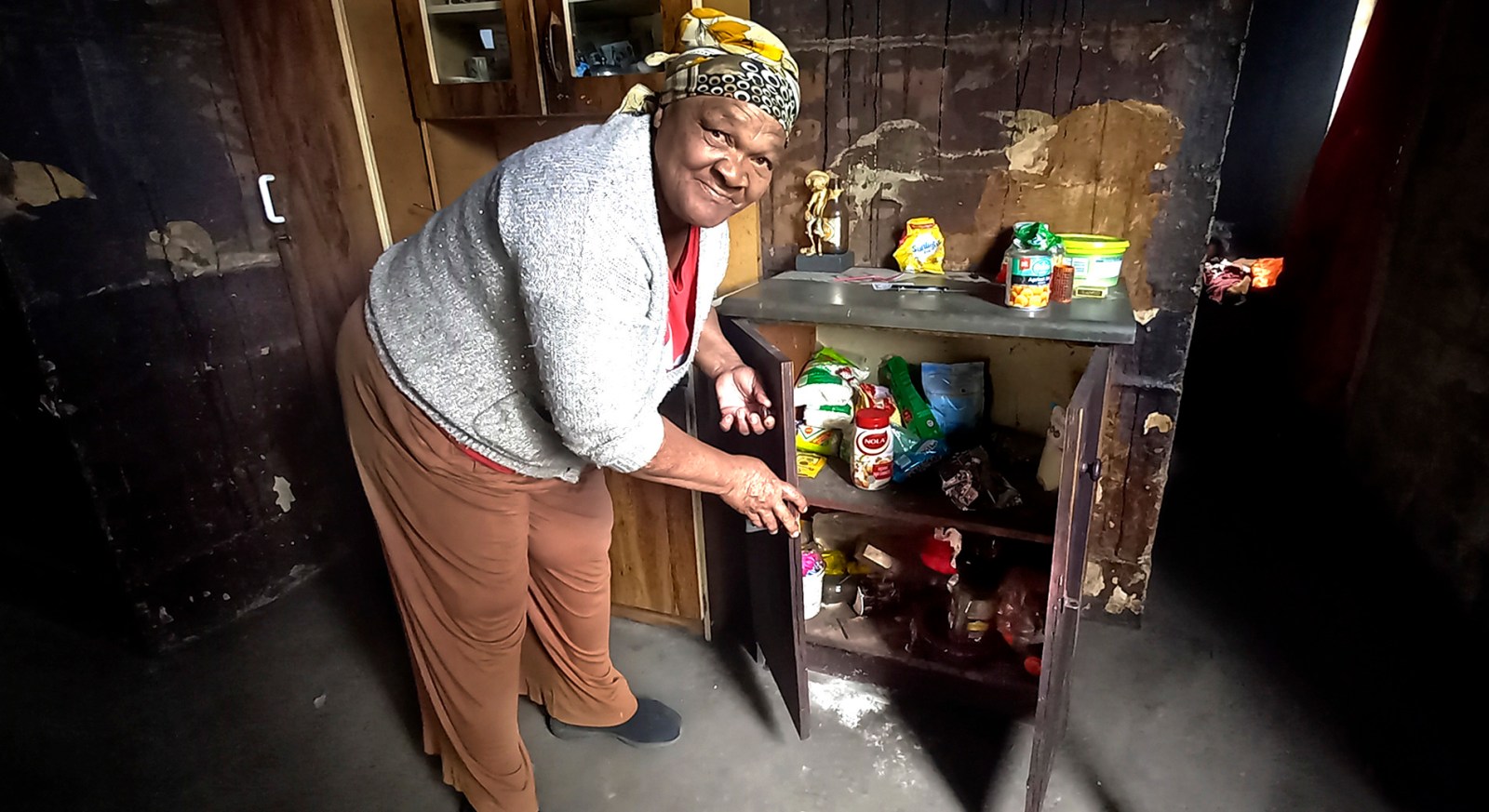 Soup ingredients is all that pensioner Arletta Everts can buy from her Sassa grant to survive the month. (Photo: Vincent Cruywagen)

An estimated 18 million people in South Africa go to bed every night without having eaten a substantial meal. The plight of many like them worldwide will be highlighted on World Hunger Day on 28 May.

Farmworkers living in abject poverty in the Paarl region dread the day soup kitchens are no longer able to provide food — they say they would face starvation.

This was the grim message that surfaced during interviews Maverick Citizen conducted with farmworkers in the Paarl area. Farms visited included Simonique and Flenterskloof.

Farmworkers emphasised that by coming forward and speaking out about their plight, they did not intend to criticise farmers, but were merely highlighting the extreme conditions under which they lived.

One of the people feeding impoverished farmworkers is Wendy Pekeur from Ubuntu Rural Women and Youth Development, an organisation dedicated to improving the lives of the vulnerable, especially farmworkers. The organisation supports 11 soup kitchens as well as a crèche in Klapmuts.

Information gathered from farmworkers indicated that many went to bed hungry as a result of job losses sustained during the Covid-19 lockdown regulations. They simply don’t have money for food.

Pekeur said: “It was at that time when we saw people going hungry, children knocking on doors and begging for food, that we started soup kitchens in response to layoffs during lockdown Level 5.”

A bumpy gravel road leads into Simonique where several farmworkers live. Our attention is drawn to a dilapidated house with no windows. The walls are stained from smoke and it has no electricity. It’s home to one of the local families.

Delene Skippers runs a soup kitchen that feeds 21 families in the area. When Maverick Citizen arrived at her home, she said she didn’t have money to buy electricity. Her cupboards were empty and the only visible grocery items were donated soup ingredients.

With a wry smile, she said: “Today we don’t have any food. We are waiting for donations from the Drakenstein police. They are the ones that keep my soup kitchen going.

“With the ingredients I receive, I must prepare eight pots of food and bake eight loaves of bread. This is then given to the surrounding farms.”

The donations arrive only four times a month, or whenever the Drakenstein police receive donations, she said. The food prepared by Skippers is often the only hot meal workers get.

While waiting for donations to arrive, workers survive on bread alone. At other times, a government grant payment allows the purchase of a 5kg packet of chicken pieces.

“The 21 families living on this farm are dependent on donations from Drakenstein police. We don’t know what we are going to do when these donations dry up,” said Skippers.

At the Flenterskloof farm, we find Arlette Everts’ house in darkness. She has been without electricity for years and uses a coal stove to prepare food.

Her kitchen cupboards are also nearly empty, with just a little maize porridge and corn inside. Beneath her kitchen table are three bottles filled with water.

“It is tough on certain farms. My husband worked 25 years on the farm and has since passed away. I don’t have any income and rely on the Sassa grant and the food we get thanks to the donations from Wendy Pekeur,” said Everts.

The soup kitchens run by Rosy Links on Flenterskloof farm are seen as a lifeline. She said farmworkers had been struggling for years, and their situation worsened because of the lockdown regulations.

“Covid-19 just made the situation worse for all of us. Farmworkers and those working in the private sector or on other farms lost their jobs. Some farms were sold and destitute workers ended up living on other farms,” she said. But then, “something good happened”.

“Wendy Pekeur arrived with hampers. She came out of nowhere and helped us. Since then, Wendy has been bringing us supplies that last for a month. If the donations from Wendy stop, then I’m afraid some of us will die of starvation,” Links said.

The Constitution, she said, guarantees the right to food and the right to dignity. Vulnerable farmworkers needed help, said Links.

“We were very fortunate to get sponsors who were willing to take us by the hand. Twenty-four women are selflessly giving their time to prepare meals for more than 2,000 people per day.

“In the beginning, the women collected wood for cooking. Then the winter started and it became more difficult. We are in need of big pots and gas,” said Links.

An estimated 18 million people in South Africa go to bed every night without having eaten a substantial meal. The plight of many like them worldwide will be highlighted on World Hunger Day on 28 May. DM/MC