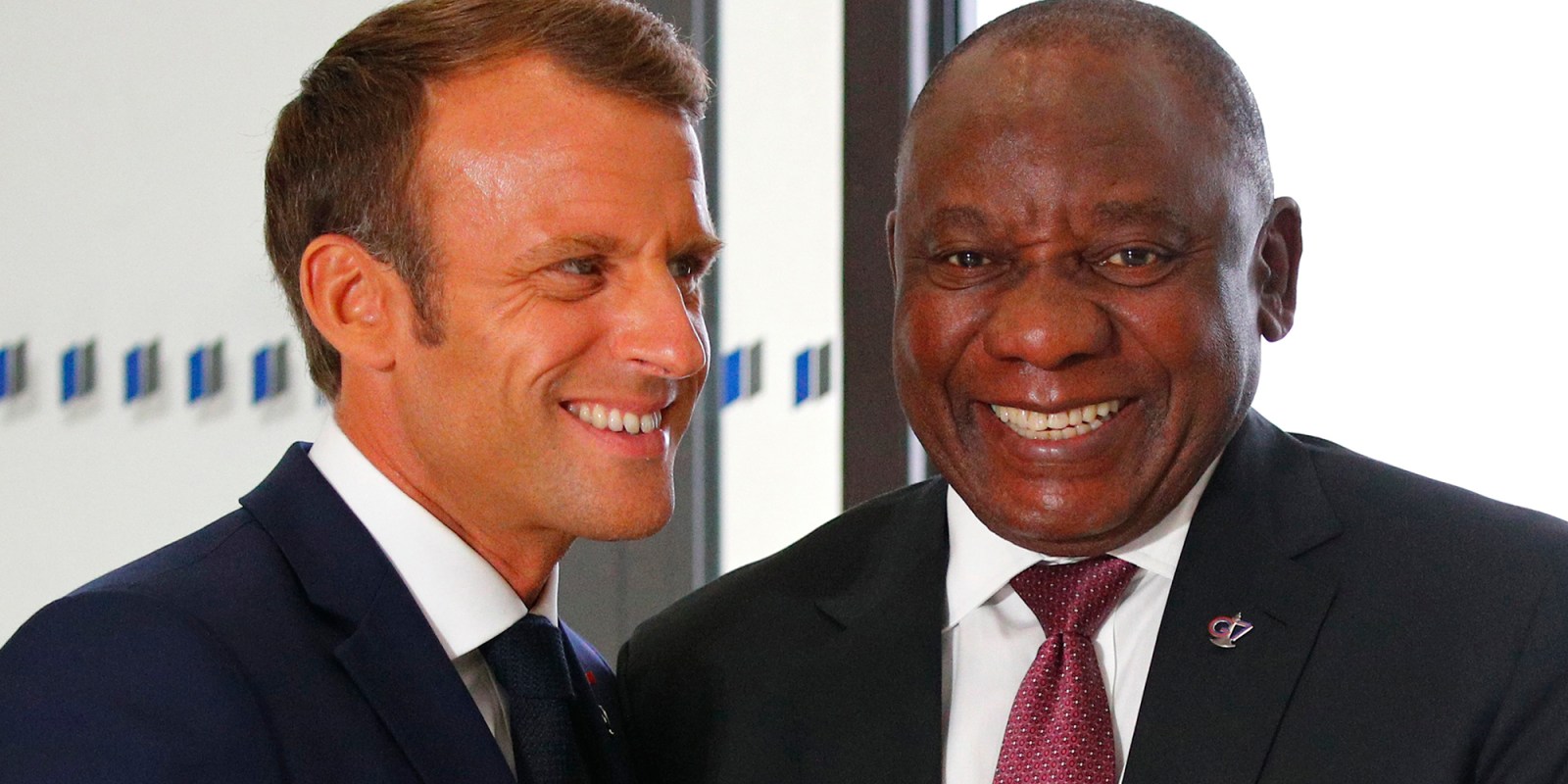 The summit will deliberate on debt relief, IMF support to African countries and how to provide capital to the African private sector to support investments that would catalyse inclusive economic activity and create employment.

President Cyril Ramaphosa and several other African and world leaders will attend a high-level summit hosted by French President Emmanuel Macron in Paris on Tuesday to seek ways to inject billions more dollars into Africa’s efforts to defeat the Covid-19 pandemic and revive its economies.

World leaders have all but agreed already on the issuing of $650-billion in International Monetary Fund Special Drawing Rights (SDRs) — a kind of credit line — which would directly pump $34-billion into African economies. But Macron will try to persuade his fellow developed world leaders at Tuesday’s summit to reallocate a substantial part of their own SDRs to poorer countries, including those in Africa.

Other African presidents expected to attend in person or by video are those of Angola, Burkina Faso, Democratic Republic of the Congo, Côte d’Ivoire, Egypt, Ethiopia, Ghana, Kenya, Mali, Mauritania, Mozambique, Nigeria, Rwanda, Senegal, Sudan, Tanzania, Togo and Tunisia. The heads of the African Union Commission, the African Development Bank and the UN Economic Commission for Africa are also expected.

Leaders of Spain, Italy, Portugal, Germany, the Netherlands, Belgium and Japan have confirmed participation, as well as a “very senior” Chinese official and the Secretary of the US Treasury, Janet Yellen.

Ramaphosa’s office confirmed that the summit would deliberate on debt relief, IMF support to African countries through SDRs as well as how to provide capital to the African private sector to support investments that would catalyse inclusive economic activity, create employment and accelerate the attainment of Sustainable Development Goals. Ramaphosa would also hold one-on-one meetings with other leaders.

Elysée officials said about 130,000 people had died from Covid-19 in Africa, though not the millions originally feared.

“But the economic impact has been considerable,” they said. Last year the overall African economy had entered its first recession in 25 years, contracting by 2.1%.  Though it was forecast to return to growth in 2022, this would not be as strong as in the developed economies.

France was proposing to try to bridge that gap, first with an urgent crisis response. The tens of billions of dollars of emergency assistance delivered to Africa so far from the IMF, the World Bank, the European Union, African Development Bank and others had fallen far short of Africa’s financial recovery needs of around $200-billion to $350-billion for low-income countries and about $400-billion for all countries, the official said.

A massive increase in emergency assistance was needed as African countries had been unable to inject the vast amounts of cash into their economies that Europe and the US had.

Africa’s hope largely lay in the IMF’s SDRs, the Elysée officials suggested. They noted that the IMF had only issued SDRs four times in the past. France’s proposal, supported by the Biden administration, for a new issue of $650-billion in SDRs, had almost been agreed already.

The officials said the decision would be legally confirmed by the IMF at its next board meeting in June and the SDRs would be issued in September.

The SDRs would be distributed proportionally to each country’s quota in the IMF, so $34-billion would go to all of Africa, of which $24-billion would be for sub-Saharan Africa. This would help the countries import medical equipment, for example.

But the $34-billion would not be enough to meet Africa’s needs and so Macron would call on the most advanced countries — which would receive SDR allocations of about $400-billion — to reallocate some of them to low-income countries, especially in Africa.

The officials said this debate would not be concluded at the summit, but this was a focus and priority for France, and Macron would also raise France’s proposal that the IMF should “some day” sell its gold reserves, which would enable it to give interest-free loans to African countries.

The officials said France was proposing that the World Bank’s emergency relief for low-income countries should be raised up to €90-billion. He added that agreement had not yet been reached by all countries on the amount. The summit would also discuss how much development aid individual developed countries could provide Africa to help its post-Covid recovery.

The leaders would also discuss how to reduce the large debt of African countries to release money to bolster their health systems.

They recalled that in November, France’s proposal for a Common Framework for Debt Treatments had been accepted at the G20. Unlike previous debt relief initiatives, all major donors and creditors to Africa would participate in the new framework, including the Paris Club, China and India. Private creditors were also involved this time, because “we believe it very important that the taxpayers in each country should not have to finance the repayment of private creditors.”

Three African countries, Chad, Ethiopia and Zambia, had already asked for debt relief under the new framework and discussions had begun with Chad.

Apart from this emergency assistance, the summit would also discuss ways to lend much more money to Africa’s private sector to stimulate longer-term economic growth.

The officials noted that international financial liquidity was so plentiful that it was sometimes possible to borrow at negative interest rates. But the problem was that risk premiums in Africa were very high and so the interest rates it paid were too great.

It was necessary to reduce those interest rates by developing credit guarantee systems, especially for smaller African enterprises, through the World Bank, the IMF, the African Development Bank, the European Commission and other institutions.

The summit would also discuss other options for financing African micro-enterprises, including supporting African equity funds and African banks to reinvest in the private sector.

But the Elysée officials cautioned that to attract foreign investment, African countries would have to improve their business environments.

“The problem is not a lack of international liquidity to invest in African infrastructure projects, but rather the lack of projects which are bankable or which seem sufficiently reliable in each aspect to attract investment.” DM