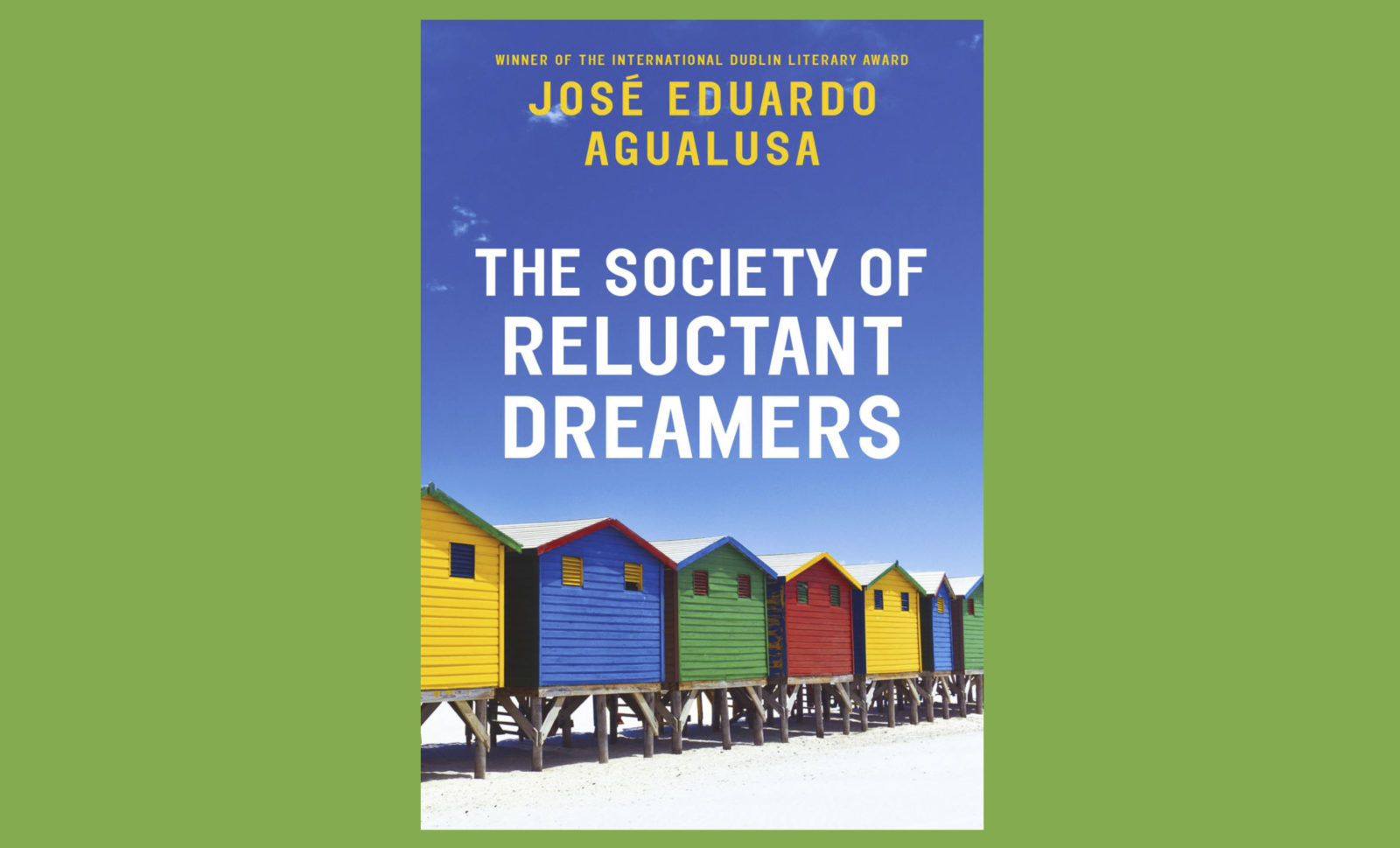 Locked down, locked in, many of us have had time to read more books than ever before. Readers, passionate about their own favourite books, are curious to know what writers have been reading during this bleak and lonely period. What was already on their shelves, what did they borrow, buy or read online?

In this, the second series of Reflexions: Reading in the present tense, Ingrid de Kok and Mark Heywood continue to invite established and younger writers and other creative artists to reflect on a text that moved them, intellectually engaged them, frightened them or made them laugh. Our reviewer today is Angelo Fick who reviews The Society of Reluctant Dreamers by José Eduardo Agualusa.

There is a long tradition of connecting storytelling and dreaming. In many societies, the storyteller retreats to the dreamworld and returns bearing tales, often for the enlightenment and instruction of their listeners. In postcolonial African polities, many writers have taken on the roles and responsibilities of traditional storytellers, using fiction to allow their readers to make meaningful sense of the world we live in.

José Eduardo Agualusa, born in Angola, has published nearly thirty books and is among the most exciting contemporary African writers.  His latest novel, The Society of Reluctant Dreamers (translated by Daniel Hahn, 2019; originally published as A sociedade dos Sonhadores Involuntários, 2017), examines the many dreams — literal and figurative — which shape life in contemporary Angola.

Daniel Benchimol, “an indolent and dispassionate observer: a Bantu flaneur”, is a journalist trying to make sense of post-conflict Angola. He is somewhat estranged from his daughter, Karinguiri, because her mother, his former wife, is a member of the elite class which governs Angola. Daniel writes about the corruption which is rife in a country in which the former liberation movement now governs to the benefit of a small group of party insiders, and this brings him into conflict with the governors and their apparatchiks in the editorial offices of news publications.

An encounter with Hossi at the Rainbow Hotel, someone from his own past when Daniel “didn’t really know what a mulatto was. I didn’t know what a white was”, a seemingly inveterate storyteller himself, plunges Daniel back into Angola’s tumultuous history. The dreams of that past — of liberation from Portuguese colonial corruption and violence, among other things — have not been realised for most of the country’s people. Among those who find the stifling politics of post-independence Angola unbearable is Daniel’s own daughter, Karinguiri, who has become involved with a group of young dissidents. And here Hossi’s stories of the nightmare past begin to mirror the non-idyll of the dreamed of present.

Agualusa weaves a compelling story of Angola’s past, placing the events of the past in a larger geographical context. Hossi’s stories of his past remind the reader of the connections between Angola’s civil war, apartheid South Africa’s militarist interventions there, and the role Cuba played in the Angolan resistance.

Additionally, Agualusa uses the connections between the various parts of the Lusophone world to situate Angola and Angolans in a global context in the present, not just in the scheme of Portuguese colonial conquest and its consequences. Angola’s cultural and political links with Mozambique and Brazil, as well as with Portugal, form the backdrop against which the political and class conflicts between the characters in contemporary Luanda are figured.

Daniel dreams of a “cotton-candy haired woman”, and by chance (as in a dream) discovers a camera that contains images of that woman. His quest for this woman of his dreams leads him to South Africa, where Moira Fernandes, who he first thinks is South African, but finds out later is from Mozambique, represents her dreams in her art because she wants “something that undoes the common meaning of things”. What could be as uncanny as literally re-presenting dreams? Through Moira, Daniel encounters Hélio, a Brazilian neuroscientist working on turning people’s dreams into films.

Hossi, Daniel’s contact at the Rainbow Hotel, a former member of Unita, the apartheid South Africa supported opposition to the anti-colonial MPLA which now governs Angola, does not dream. Instead, he appears in other people’s dreams. He recounts how he was captured during the civil war, taken to Cuba at the height of the Cold War, where he worked with a soldier and a psychologist who tried to use his power to appear in other people’s dreams for unknown but presumably military ends.

This allegory about literal dreams, of course, plays out against the betrayal of metaphoric dreams. Karinguiri, Daniel’s young daughter, is part of a generation of Angolans disillusioned with the dictatorship’s control of the country’s politics, and with the corruption that is rife in their world. Even as a member of the ruling class, she finds herself in opposition to the old guard of her parents’ and grandparents’ generation. She is detained during a protest against the president, and all the securocratic and paranoid habits of the MPLA’s past as a liberation movement return. Whatever deictic distance Daniel may have placed between himself and the quotidian violence and violations of post-millennial Angola dissipate when his own daughter’s life is at stake, and not even her ruling class mother and grandfather can extricate her.

The conflict between the old and the young, between those who dreamed of a different Angola and struggled for it and those who are disillusioned by the nightmare engendered by the liberators turned governors, is at the core of Agualusa’s examination of contemporary Angola. This is of course not in any way uniquely Angolan — the generational conflict seems to be a feature of the postcolonial condition, as Karinguiri confronts Daniel with the gap between the Angola they dreamed of and fought for, and the country they actually live in. It is Moira’s description of dreams which Daniel must confront: “All dreams are frightening, because they’re intimate. They’re the most intimate thing we have. Intimacy is frightening.”

And as the dictator who “stole our country” insists on veneration and gratitude for having realised the dream of a post-independence and post-conflict Angola, Moira’s teasing warning to Daniel seems apposite: “You think one single truth can make an entire fiction true? Oh, you really are so naïve. A fifty-year-old man really shouldn’t be that naïve.”  Contemporary readers in Mozambique, South Africa, Namibia, Cuba, and Brazil, places which all appear in the novel, will be intimately familiar with this contradiction between their justifying belief in the present as an improvement on the past, and their awareness of the horrors of the moment they find themselves in.

Agualusa’s novel is clearly on the side of dreams, and dreamers. Hope lies in the imagination, the ability human beings have to dream of things being different from how they are forced to experience them. Moira desires to dream her art into life. Daniel’s desire to make sense of Hossi’s dreamlessness and his dream-travel leads him to Brazil in search of a missing plane and the world that disappeared with it. Karinguiri’s dream of a better life in a different Angola causes her to descend into the nightmare undercurrent of violence which ensured her idyllic childhood as a member of the elite. The interchangeability between dream and reality is surreal, but then so is the postcolonial condition which Agualusa’s characters inhabit.

The horrors of the past, embodied in torturers turned security chiefs, return much like Daniel’s dreams of Moira, his “candy-haired woman”. But Agualusa is interested in the human spirit’s ability to dream on and through, to imagine alternative resolutions to those insisted upon by dictators. And it is in this insistence on hope, on the power of the imagination, that The Society of Reluctant Dreamers. As Hélio, the Brazilian neuroscientist tells Daniel, “Unfortunately, people have stopped seeing the value of dreams. We need to restore dreams to their practical vocation.”

In this compelling novel, Agualusa has given us access to his dreams, and for the duration of his telling, our incredulity is successfully suspended.  DM/MC

Angelo Fick is the Director of Research at the Auwal Socio-economic Research Institute in Johannesburg. After two decades teaching across various disciplines in universities, he briefly worked as a political analyst in broadcast news media.