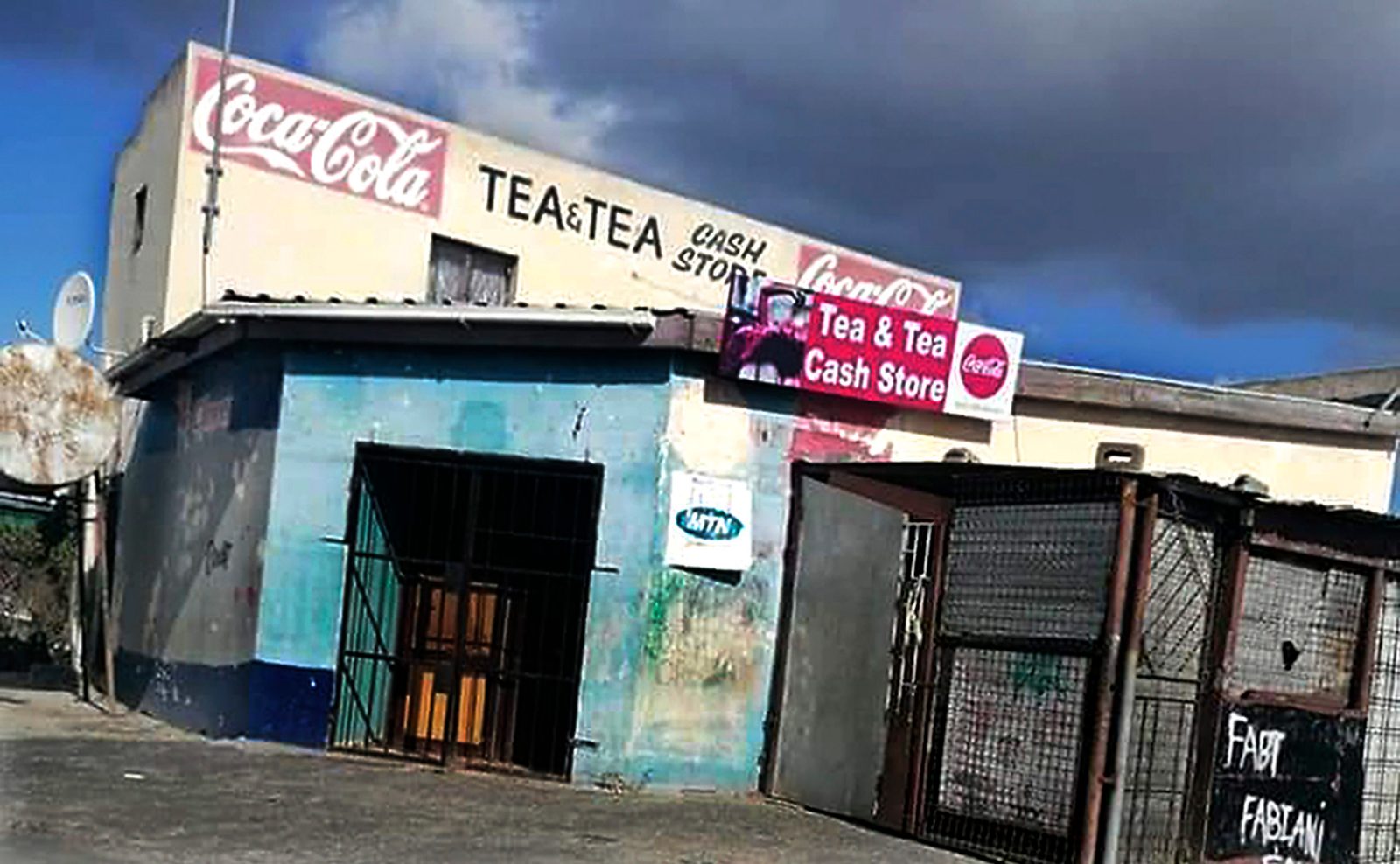 A shop in Khayelitsha, Cape Town where one of 12 people was shot and killed by gunmen on Saturday, 15 May. (Photo: Supplied)

Extortionists, who began targeting domestic workers in 2020 for ‘protection’ money, have stepped up their racket as Guptas and Boko Haram gangsters fight for greater control.

Criminal gangs vying for a slice of an extortion ring controlled by the Guptas and Boko Haram gangs in Khayelitsha are behind a massacre that claimed the lives of 12 and injured seven others on Saturday, 15 May.

The gangs have been wielding increasing power — first targeting foreigners for exorbitant protection “fees”, then expanding to include people near taxi ranks.

The situation has become so dire that community neighbourhood watches have to accompany commuters to taxi ranks and bus stops in the township to ward off the gangs of extortionists.

Potelwa said the shooting spree began when the body of the first victim, who had sustained several gunshot wounds, was found in Banzi Street, Site B. A firearm was found next to the body.

“Police also found a substantial amount of cash,” she said.

In the second incident, two Somalis were believed to have been killed in retaliation for the first murder. One victim died at the scene and the other was seriously wounded and taken to hospital, where he later died.

Shortly afterwards three men in RR Section were shot dead. The shooting is believed to be linked to the first two killings, said Potelwa.

The killing didn’t stop there as two more men were fatally wounded at a spaza shop in Y-Block. Potlewa said other victims of the shootings, who were taken to the Tygerberg and Khayelitsha District hospitals, also died.

The situation in Khayelitsha remained extremely volatile at the weekend and police have stepped up patrols in the area.

Investigators attached to the Anti-Gang Unit have scoured the area for possible leads and have launched an investigation.

The massacre comes after a recently published research report titled “Lifting the Veil on Extortion in Cape Town” by Peter Gastrow, which painted a bleak picture of extortion rings operated by the Guptas and Boko Haram gangs in the city and how these had spilt over into communities.

Speaking to Maverick Citizen, Lukas said: “It is not the first, second or third time that our people have been killed in such a brutal way. Something drastic needs to be done or the very informal economic sector on which township mothers depend to feed their homes will collapse.

“If that day happens then most households will be deprived of an income that keeps lights in the house on.”

While communities have deployed neighbourhood watch members to protect workers walking to taxi ranks and bus stops, Lukas said: “We need more community hands to come aboard to tackle the huge problem we are faced with.”

Expressing his outrage, Ndithini Leon Tyhido, of the Khayelitsha Development Forum (KDF) said they were “saddened and angered by the senseless killings”.

Echoing Lukas’s sentiments, he said: “We believe that the murders were crimes carried out by the Boko Haram and Guptas gangs. Most disturbing is that residents are reluctant to come forward with information because they fear that corrupt police officers might relay the information to the thugs”.

Tyhido said what was happening in the township adversely affected the informal economic sector in the area.

“The mother who sells chicken legs on a corner constantly has to look over her shoulder and run for cover when gunshots are fired.”

On how to begin to tackle the scourge, Tyhido said: “A new CCTV safety camera system that caters for townships needs to be implemented. A control room within Khayelitsha needs to be built and linked to the system of the City of Cape Town metro police.”

The forum has also called on the government “to stop the politicisation of community safety and combine efforts to root out the scourge of extortion of gangs within Khayelitsha”.

According to Gastrow’s report, Boko Haram is the more established of the two criminal gangs and interviews he conducted with Somali shopkeepers showed extortion rackets began in Khayelitsha in 2017/18.

He further revealed that 37 spaza shop operators were killed in Cape Town townships during 2017. However, the killings slowed after an agreement reached between extortionists and foreign shopkeepers, apparently struck in 2017/18.

But the situation changed in early 2020, Gastrow explains, when extortionists began targeting domestic workers who were apparently asked to pay R200 a month to these thugs.

The situation seems to have worsened when gangs began demanding protection money and in-fighting between Gupas and Boko Haram gang members over greater control of the takings escalated. This, community leaders said, had led to the rival gangs killing one another.

On Sunday, 16 May, Community Safety MEC Albert Fritz condemned the violent attacks, saying indications were strong that the killings were perpetrated by organised groupings and that extortion was the motive.

Fritz has asked for additional Law Enforcement Advancement Plan deployment in the area and called on residents to assist police in their investigations by reporting crime.

Conveying his condolences to the victims’ families, Fritz called on people not to take the law into their own hands.

Police have appealed to anyone with information that could assist their investigations to contact the police on 08600 10111 or use the MySAPSApp. All information would be handled in strict confidence, Potelwa said. DM/MC