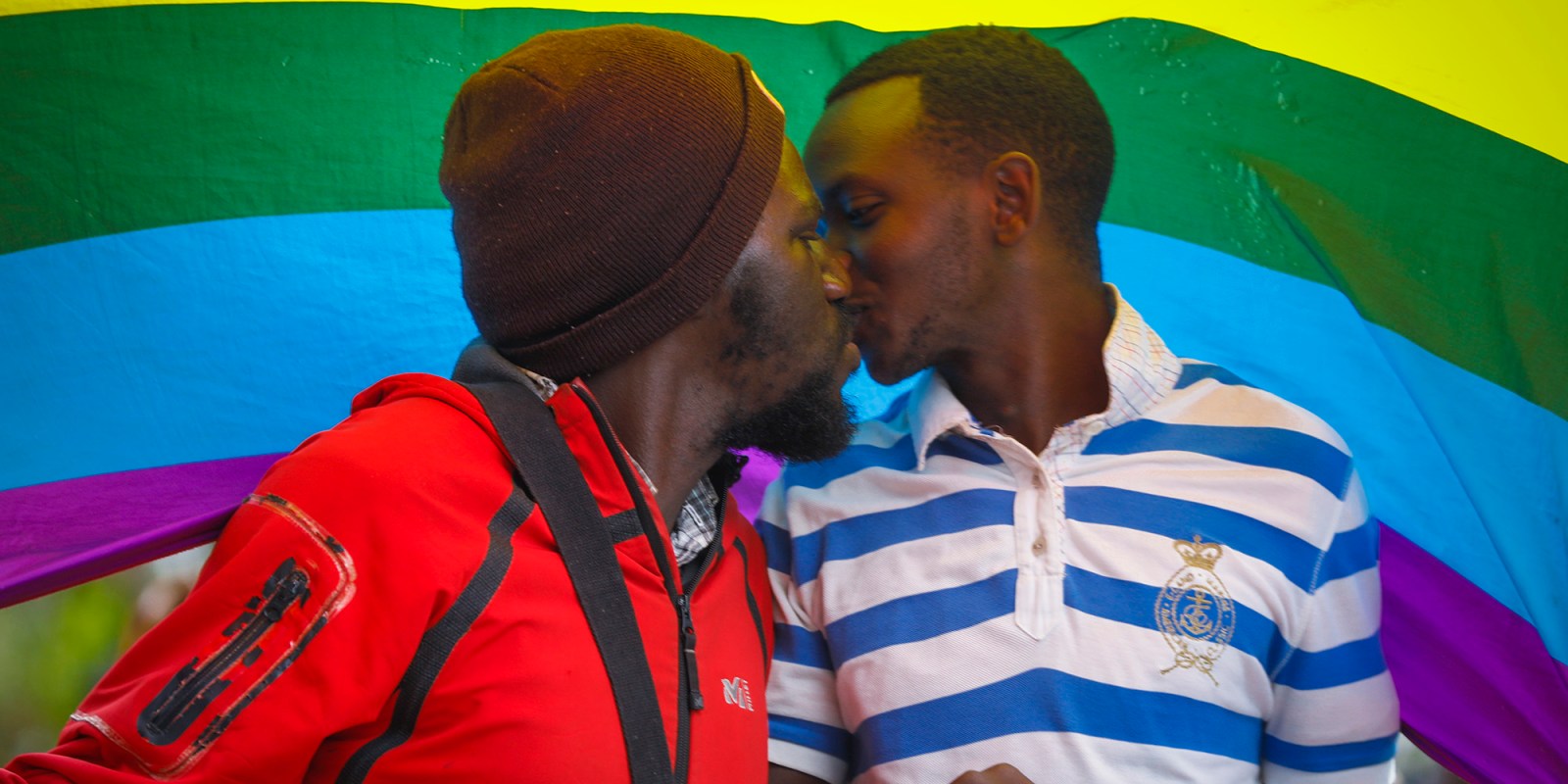 Ngendakumana Gerard (left), an LGBTI refugee from Burundi, kisses his partner from Burundi, Mandela Diego, at the office of the United Nations High Commissioner for Refugees. (Photo: EPA-EFE / DAI KUROKAWA)

Uganda just became the 33rd African country to criminalise same-sex sexual acts. Despite most African countries having inherited the ‘unnatural offences’ laws from the British Empire, French and Dutch colonial powers, Africa seems to be moving backwards, with 61% of African countries now being unsafe for the LGBTI community.

Tanveer Jeewa is a legal and communications consultant at the International Commission of Jurists (ICJ). She is an LLM candidate in Public Law at the University of Cape Town, was previously a law clerk at the Constitutional Court and prior to that interned at the United Nations International Criminal Tribunal for Yugoslavia.

Today (17 May) is International Day against Homophobia, Transphobia and Biphobia – a day created to draw the attention to the violence and discrimination experienced by lesbian, gay, bisexual, transgender and intersex (LGBTI) people. It is an important day, which should ideally remind us of how far we have come in ensuring the protection of the rights and lives of LGBTI people.

Yet, in May 2021, Uganda became the 33rd African country to criminalise same-sex sexual acts. Despite most African countries having inherited the “unnatural offences” laws from the British Empire, French and Dutch colonial powers during colonisation, Africa seems to be moving backwards, with 61% of African countries now being unsafe for LGBTI people.

Sadly, even in countries where the legal framework is progressive, homophobia remains pervasive. In April alone, an LGBTI person was killed every week in South Africa, for example. Uganda and South Africa are on the opposite sides of the spectrum with respect to the legislative protection afforded to the human rights of LGBTI people. Yet, as both examples illustrate, human rights violations, including violence and discrimination experienced by LGBTI people, are structural as well as physical: LGBTI people’s lives are at risk. In such cases, where national laws and justice systems fail to protect LGBTI lives, can they turn to regional human rights institutions for protection?

‘African values’ and the regional human rights system in Africa

While the African Charter on Human and People’s Rights (the “Banjul Charter”) does not explicitly mention sexual orientation, gender identity and expression among its prohibited grounds of discrimination, it provides for every individual’s right to life, dignity and integrity, and prohibits torture and other cruel, inhumane and degrading treatment or punishment. All African countries have either ratified or acceded to the Banjul Charter and its provisions have in the past been used in strategic litigation to enforce the human rights of LGBTI individuals.

Additionally, the African Commission on Human and People’s Rights adopted the landmark Resolution 275 affirming the duty of states to uphold the human rights of every person under the Banjul Charter, whatever their real or perceived sexual orientation or gender identity, and noting with alarm the rise in acts of violence, discrimination and other human rights violations against individuals on the basis of their real or imputed sexual orientation or gender identity.

Despite this progress, four years after this resolution was adopted, the African Commission stripped the Coalition of African Lesbians (CAL) of its observer status following a request by the African Union Executive Council to consider “African values” in its review of applications for observer status. CAL is a pan-African civil society organisation committed to advancing freedom, justice and bodily autonomy for all women on the African continent. Rightfully, human rights advocates noted with concern that this decision was not only indicative of the political influence of member states on the African Commission but also, of its “bias towards certain thematic issues”.

In an even more progressive step, particularly in comparison with the African Commission’s hostile or, at best passive, stance towards the human rights of LGBTI people, the Inter-American Commission on Human Rights established a rapporteurship on the rights of LGBTI persons. Since 2014, the rapporteur has been charged with monitoring the enjoyment of human rights by LGBTI people in the Americas. While this has not translated into the elimination of hate crimes, the concrete actions taken in the Americas have signaled to states in the entire region that human rights violations against LGBTI persons are a matter of serious concern.

What does this mean for the African continent?

There are some obvious recommendations that could be formulated in light of this simple comparison of the two regional human rights systems. An urgent one is for the African Commission to review its interpretation of “African values”. Homophobia, far from being an African value, is one inherited from and imposed by settler colonies. In comparison, “ubuntu” from the saying in Zulu “umuntu ngumuntu ngabantu”, which directly translates to “I am because we are”, is an African value – one that recognises every individual’s humanity. The African Commission should also actively consider cases and country situations involving the violation of the human rights of LGBTI persons in Africa, and give serious consideration to the establishment of a rapporteurship on the human rights of LGBTI persons in Africa, as the Inter-American Commission did.

However, none of the above alone is enough: the answer lies beyond the law. South Africa is a prime example of a country where homophobia and transphobia remain pervasive in society, notwithstanding the fact that LGBTI persons may turn to the courts to seek the enforcement of their human rights.

In fact, perhaps unsurprisingly, back when sexual orientation had been included as a prohibited ground of discrimination in the South African Constitution, there was still widespread homophobia in society. The legal protection of the human rights of LGBTI people did not magically get rid of pervasive societal homophobia and transphobia in South Africa. The egregious violence that LGBTI persons face in South Africa to this day remains proof that sentiments have not significantly changed.

There is a common thread in all African countries in relation to homophobia. Whether homosexuality is criminalised or not, the dominant societal attitudes on the continent remain homophobic and are often fed by spurious political, religious and legal justifications. The first step is undoubtedly to ensure equality before the law, equal protection of the law, and freedom from discrimination of LGBTI persons by advocating decriminalisation of homosexuality.

And in those countries with already progressive legal frameworks, such as South Africa, we need to hold the institutions that are interpreting and enforcing these laws to account, to ensure real equality and freedom of discrimination, in practice, as much as in law.

It is telling that an LGBTI organisation has had its observer status withdrawn. In effect, what the African Commission communicated through its decision is that they will not consider the views and issues of the LGBTI community. It is trite that an institution that is homophobic will hardly ever reach a conclusion that is not. It is time for us to change this reality and narrative. Such attitudes from institutions in which the public ought to have faith cannot be tolerated. It would be a euphemism to state that African countries have failed LGBTI people, time and time again.

The LGBTI community is crying for help in the face of human rights abuses committed against LGBTI persons every day on the African continent. Yet, authorities keep quiet as the cries echo in neighbouring countries. Our focus should shift, and important institutions, such as the African Commission, should be under greater scrutiny and be held accountable by all of us. DM