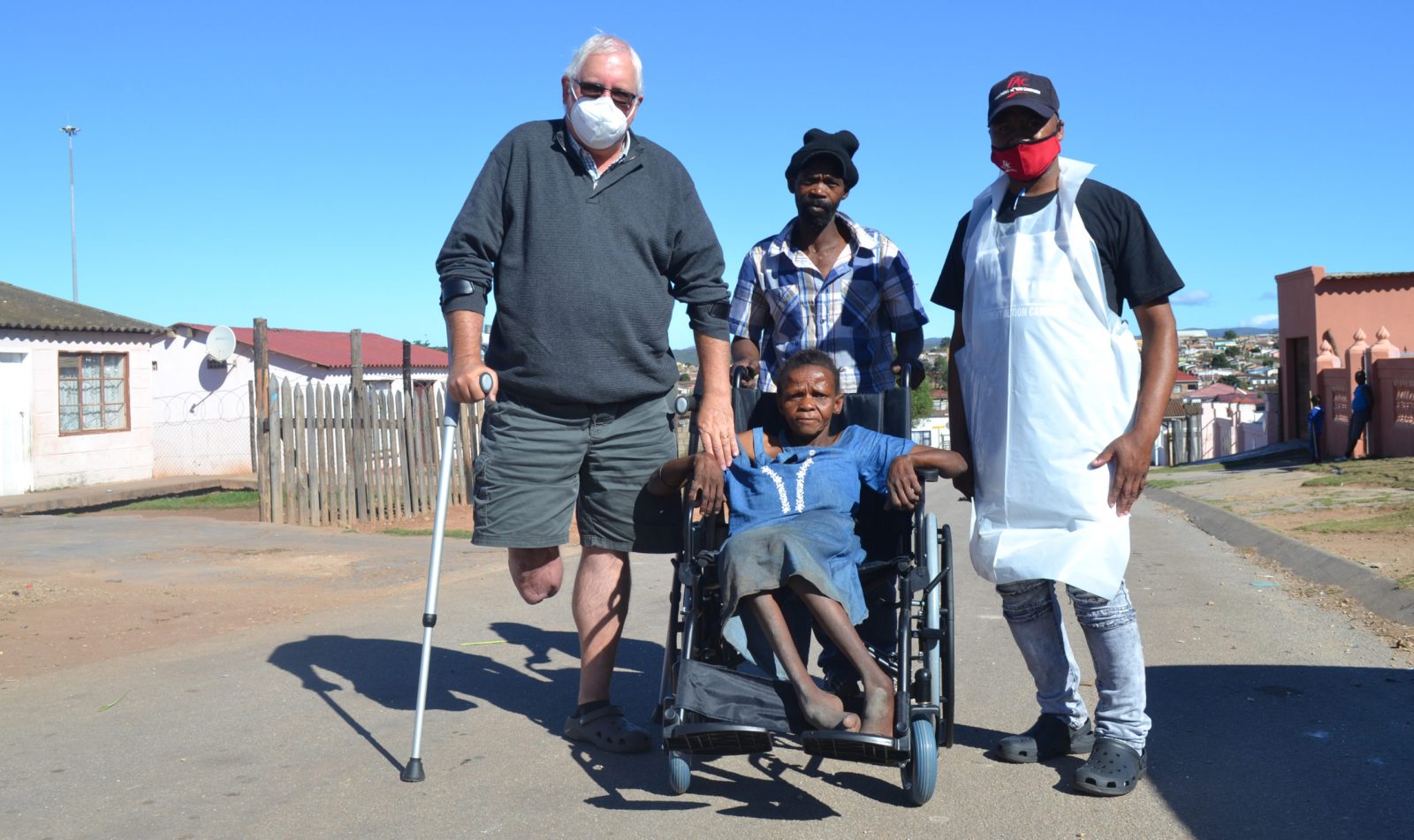 “When I saw Eunice on the floor and how she had to crawl around, it broke my heart. It is an amazing feeling to see her in her new wheelchair.”

For the past two years, Nelson Mandela Bay resident Eunice Ndokweni (56) has had to crawl wherever she wanted to go after her state-issued wheelchair broke.

This week Brian Paddey from the Amputee Support Group handed over a brand-new wheelchair sponsored by two DM168 readers. Ndokweni said her heart was filled with gratitude.

“My life will be easy now that I will be able to move freely. God has answered my prayers and I believe God will protect the people who [changed] my life for the better. I’m really happy [that] even those people who used to call me names [will] now stop calling me names. I want to say thank you to the donors from the bottom of my heart.”

Ndokweni was born with club foot, which made it difficult for her to walk or stand. She used to have a wheelchair, but she hasn’t been able to use it in the past two years – it is broken beyond repair.

She described her life before she received the wheelchair during an interview in April.

“I used to have a wheelchair, but it broke two years ago and my family has no means to replace it. Since then, I prefer to crawl on the ground to go to the toilet or when I’m washing dishes or doing other household chores. It used to be painful to crawl around, as I used to develop blisters on my knees and hands, but now I’m used to it,” she said. “I just can’t crawl all the way to the clinic. If I want to go to town, I have to crawl to catch a taxi. Sometimes taxi drivers have no patience and I have to hire transport whenever I want to go somewhere. All I want is a wheelchair. I have no problems with my hands, as I can do household chores. I’m healthy, I just need help so that I can … move freely.”

Two Daily Maverick readers, Joan and Martin Peskin, were touched by her situation after they read about it in the newspaper and donated the brand-new wheelchair.

The South African couple, who now live in Canada, made contact with Paddey, who acquired and had the wheelchair assembled for Ndokweni.

“It was heart-warming to see Eunice in her new wheelchair. I live with disability myself and I know what it means and especially now that I’m doing a lot of work at Livingstone Hospital [a tertiary hospital in Nelson Mandela Bay],” said Paddey.

“The stories you hear about people battling without wheelchairs are heartbreaking. The Department of Health is unable to assist them. There are literally thousands of people needing wheelchairs. Being able to make such a difference to donate wheelchairs and crutches to someone is something wonderful,” he said.

“When I saw Eunice on the floor and how she had to crawl around, it broke my heart. It is an amazing feeling to see her in her new wheelchair. This is an opportunity for her to be on the same level as others in her community.”

Paddey lost his leg in a motorcycle accident 10 years ago, after which he got involved with the Amputee Support Group. Thembisile Nongampula, a community health worker and provincial chairperson of the Treatment Action Campaign, was also troubled by Ndokweni’s case and said he was so happy that her prayers were answered.

“I don’t know how to thank the people who did this. Now she has the freedom to move freely around her house and she will also be able to visit her friends and relatives. I was so touched when I saw her darkened knees and blisters on her feet. I knew that something [needed] to be done to save her from [the] suffering and pain she [has] endured over the years.”

Following the story featuring Ndokweni and others, Sipho Belesi (68) also received a wheelchair from the Department of Health. He had been on the waiting list for a wheelchair for years after his leg was amputated above the knee owing to necrosis caused by circulation problems. DM168

This story was produced in collaboration with Spotlight.