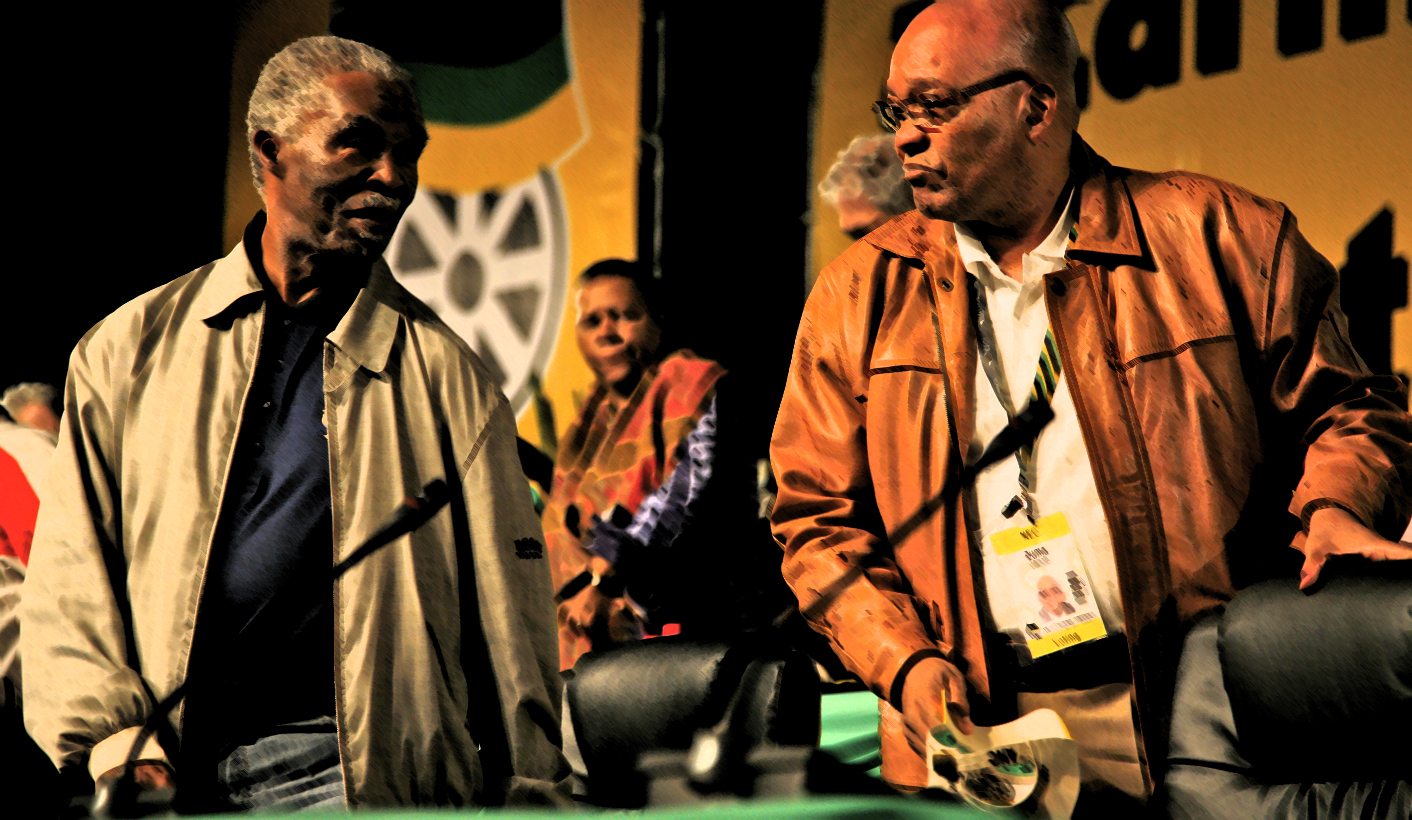 Photo: Original photo of Thabo Mbeki and Jacob Zuma at the ANC's Polokwane conference in December 2007 by Greg Marinovich.

Like Thabo Mbeki ahead of the Polokwane conference, Cyril Ramaphosa is in control of the ANC’s leadership structures, the national executive committee and the 20-member national working committee.

By the time Thabo Mbeki realised that he did not have the support of the majority of ANC branches, he had already been humiliated on the conference floor in a 60:40 defeat by Jacob Zuma.

In the build-up to the 2007 ANC 52nd Congress at Polokwane, those close to Mbeki would speak of an ANC that behaves like the sea.

At every corner one would hear the hackneyed “The ANC cleanses itself… It is like the sea” mantra. It did not take long for the political newshounds to figure out that the Mbeki disciples may as well have been parroting “The Chief”.

The ANC that Mbeki knew – the one he had spent his entire adult life in – was not the same party whose members burnt T-shirts bearing his image and hurled unprintable insults at him.

The 2007 conference was a watershed moment in many respects. Not only did it mark the first major split in the ANC since its unbanning, but it also saw the ANC’s ranks swelled by members who had no grounding in the party’s values and ideals. It was an era that could truly be characterised as the rise of populism.

It no longer mattered what intellectual contribution one made for the betterment of the organisation; the deciding factor on leadership became about who was a more vociferous rabble-rouser than the next comrade. But more concerning was that elective conferences had become about money – about who, among the contenders, had the deepest pockets. It was not unusual for “comrades”, managing the individual campaigns, to be seen driving around in brand-new Mercedes-Benzes ahead of regional, provincial and national conferences. The use of campaign funds to buy “airtime” or “cold drink” are still commonplace – euphemisms for payments to delegates to buy their support.

That is the ANC that is foreign to the likes of Mbeki. Sadly, it’s the ANC today.

As President Cyril Ramaphosa moves forward following his recent victories against Ace Magashule, he would do well to remember this. But given that he admitted to the use of about R400-million for his CR17 campaign, I’m sure he already knows it.

Magashule and his grouping may be wounded for now but they are not about to give up just yet. It is a fight to the death. And that fight will be fought in ANC branches over the next 17 months towards the ANC’s 55th national congress in December 2022.

Like Mbeki ahead of the Polokwane conference, Ramaphosa is in control of the ANC’s leadership structures, the national executive committee (NEC) and the 20-member national working committee (NWC). As things stand it seems the provinces are also behind him.

But what Mbeki did not have, or did not do, was to convince enough branches that Zuma was a bad candidate to lead the ANC and the country. With hindsight we now know that Mbeki was right all along. But instead of this understanding filtering to the grassroots of the ANC, it remained in smoke-filled cigar lounges and the dinner tables of top restaurants. Ramaphosa must not repeat that mistake.

This is a crucial lesson, especially when the ANC is introducing an elections committee, led by former president Kgalema Motlanthe.

This elections committee will develop guidelines and filter the candidates who will represent the governing party in the different spheres of government.

Given the poor state of governance of municipalities and government departments right now, such a committee is not only necessary but also crucial for the ANC’s survival. History has proven that its deployment policy is not only flawed but also has the potential of collapsing governance in the different spheres.

Bad deployments are the hallmark of the ANC rule over the years. So the ANC needs this as it goes to the local government elections in October.

Yet, given the rise of populism in the ANC, this development will definitely be a bone of contention within the party’s lower structures.

By design, the screening process will filter out the populists – those who owe their rise to power to their melodic chanting of political slogans as opposed to their political acumen or understanding of governance matters.

This will become the next battleground. Magashule and the disgruntled grouping within the ANC NEC will seek to build another coalition of the wounded against Ramaphosa. With enough populists on his side, they may well be on their path to power.

After all, guerrilla warfare is Magashule’s forte.

This means that the introduction of the elections committee – as well as Magashule’s suspension – must be carefully handled and explained to all the party’s structures.

Failing that, we might have another Polokwane scenario on our hands. DM168