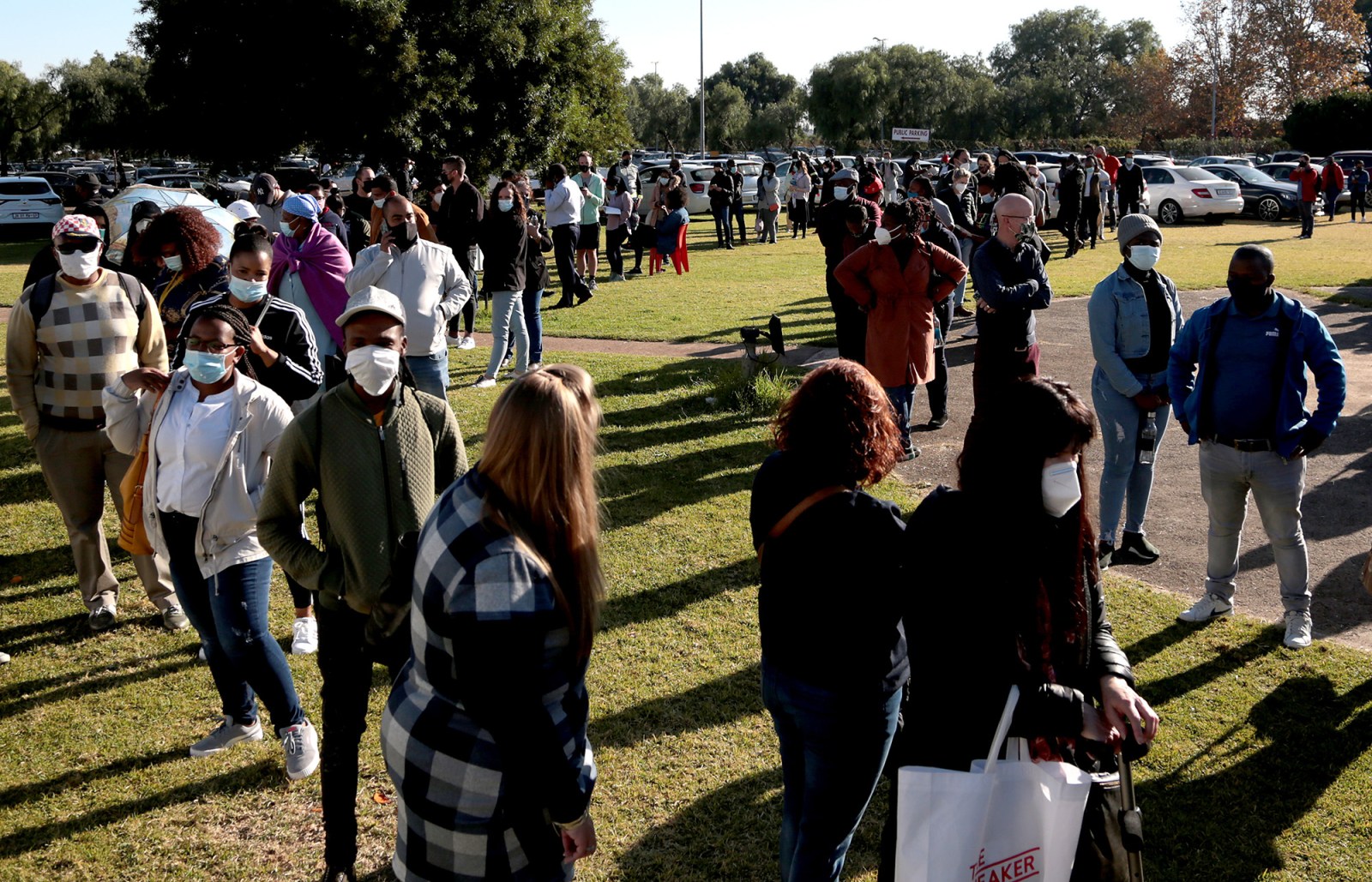 Health workers are queuing for vaccination at Helen Joseph Hospital in johannesburg,a drive to vaccinate as many health workers is underway.Photo:Felix Dlangamandla/Daliy Maverick

Are we ready for the rollout? There are many plans, but implementation looks uneven.

“We will start slow,” Minister of Health Dr Zweli Mkhize said this week as the due date to roll out the next phase of South Africa’s beleaguered vaccination programme kicked off.

He was not exaggerating.

Private sector sites “will open later next week”, Mkhize told Parliament as he tabled the department’s budget vote on 13 May.

Earlier in the week Mkhize’s spokesperson, Dr Lwazi Manzi, said they were still working on the system that sends out appointments. By Friday, 14 May she had not said when this would start. A list of sites that she promised would be published by the end of the week had not materialised by then.

Manzi also referred questions on the progress of a safety audit at the Gqeberha facility of Aspen Pharmacare – where the Johnson & Johnson vaccine for South Africa was being compounded – to Aspen. Millions of doses of the J&J vaccine are awaiting the finalisation of the audit before being released. Aspen referred queries to J&J, which did not reply to questions. Neither did the United States Food and Drug Authority; nor did the European Medicines Agency. At this stage it is not known when the vaccines will be released.

Yuven Gounden of the South African Health Products Regulatory Authority (Sahpra) said they have completed their part of the safety audit.

“Sahpra has inspected the Aspen facility. Sahpra is satisfied that it is operating at an acceptable level of compliance with the principles and guidelines of good manufacturing practice as prescribed,” Gounden said.

Dr Thobile Mbengashe, the special Covid-19 advisor to Eastern Cape Premier Oscar Mabuyane, said the rural provinces were anxious to get J&J vaccines because it will be the “workhorse” of the vaccine rollout.

Although doses of the Pfizer vaccine have been distributed to provinces, Mbengashe said it is not ideal for rural areas: difficult refrigeration requirements must be met; the vaccines, once mixed, expire within six to seven hours; and people must return for another dose later.

At the moment, South Africa only has doses of the Pfizer vaccine available.

In the past week there has been a surge in the number of people being vaccinated as part of the Sisonke Research Study, which is using the J&J vaccine to vaccinate healthcare workers. At some health facilities in Gauteng, for example, queues numbered thousands and some people waited for up to five hours.

Demand for vaccination increased after the Medical Research Council (MRC) expanded the eligibility criteria for the study to include not just health workers on the frontline but all those who fall under the World Health Organization’s (WHO’s) definition of the “health workforce”.

One of the lead investigators and the president of the MRC, Prof Glenda Gray, explained that after the Sisonke study was “paused” by the ethics committees and Sahpra, as a result of reports of fatal blood clotting in six patients in the US, the initial momentum was broken. When vaccinations resumed on 28 April, demand was lower. “The pause killed us,” she said.

Gray said that since the weekend they had contacted “every health organisation under the sun”, including advocacy organisations such as Treatment Action Campaign (TAC) and Section27, as well as medical aid schemes and administrators. They offered the vaccine to undertakers and traditional health practitioners – “anyone who meets the WHO definition of the health workforce”.

Some activists have raised concerns that this meant less vulnerable people were jumping ahead of the most needy.

In response to concerns that this was “queue jumping”, Gray said that the terms of the study agreed by Sahpra “specified health workers” – and that was why the study could not be broadened to other essential workers.

She also said that health workers getting the Sisonke vaccine now would free up vaccines “on the other side” – meaning when Phase 2 starts next week.

This was the state of the provincial vaccine rollouts this week:

The latest National Income Dynamics Study – Coronavirus Rapid Mobile (Nids-Cram) Wave 4 study of Covid-19, released this week, indicated that around 70% of South Africans said they would get vaccinated if a jab was available.

The study found that young people and those with only a primary school education were more likely to be hesitant, while people with co-morbidities and those who are older were less likely to be vaccine-hesitant.

In the Free State, the first province to be struck by a third wave of Covid-19 infections, pensioners were keen to get registered and be vaccinated.

Ntsamaeng Mofokeng (69) of Welgepark, Harrismith, said she’s ready to take a vaccine. She said that, though she used steam to ward off Covid-19, government assistance is needed to end the pandemic.

Another pensioner, Mooki Moloi (71), from Phuthaditjhaba, Qwaqwa, said this was an opportunity he won’t miss. He added that three or four family members died in 2020 from Covid-19 and he’s still mentally scarred by what happened.

But some elderly people in the Eastern Cape this week said they are not sure yet if they want the vaccine or not.

Another elderly woman, Jimina Mpisekhaya (95), said she would welcome government action to rescue the elderly from the virus because they are “clueless” about the vaccination registration processes in rural areas. “We welcome any government intervention of this vaccine because we don’t know which is right or wrong.”

Ndzongwana Mthengi (91), from Madadeni in Tsolo in the Eastern Cape, said he is scared of Covid-19 because he does not know the history of it. He said he will take the vaccine “if he is still alive” when it becomes available.

Kolekile Krexe (64), from Lindile in Mthatha, was ready to get the vaccination but concerned about delays in registration. “What concerns us in the rural areas is that we do not have any information about when we must start registering for the vaccine.”

Krexe said his wife had been infected with Covid-19 but she survived. “With my wife I saw how dangerous this deadly virus is. I will take this vaccine in order to protect myself and my family because it is very dangerous.”

Residents of Umlazi township, south of Durban, were also unsure they would be among those receiving the vaccine.

Mnotho Mvuni (30) from D Section in Umlazi, says he has been following the news of Covid-19 as well as that of the vaccination campaign and he is not impressed. He is adamant that he will not be getting the vaccine when it is open to everyone later this year.

“I will not be getting the vaccine. I do not like vaccinations in general, especially this one. We are being told that these vaccines have been concocted to kill us,” Mvumi said. “We hear that people have been vaccinated and have died due to serious side effects.” Yet he plans to continue protecting himself and his family from the virus.

Thabile Madida (43) believes Covid-19 is a man-made illness and she is convinced that a vaccine is not necessary. A vendor with a booth outside KwaMnyandu Mall in Umlazi, she sees more than 50 customers daily at the busy shopping centre, but says she will not bother to get vaccinated. She claims that every time there is a transition in government a new illness is conjured up to strike fear into people. DM168

This story was produced with Elri Voigt from Spotlight.