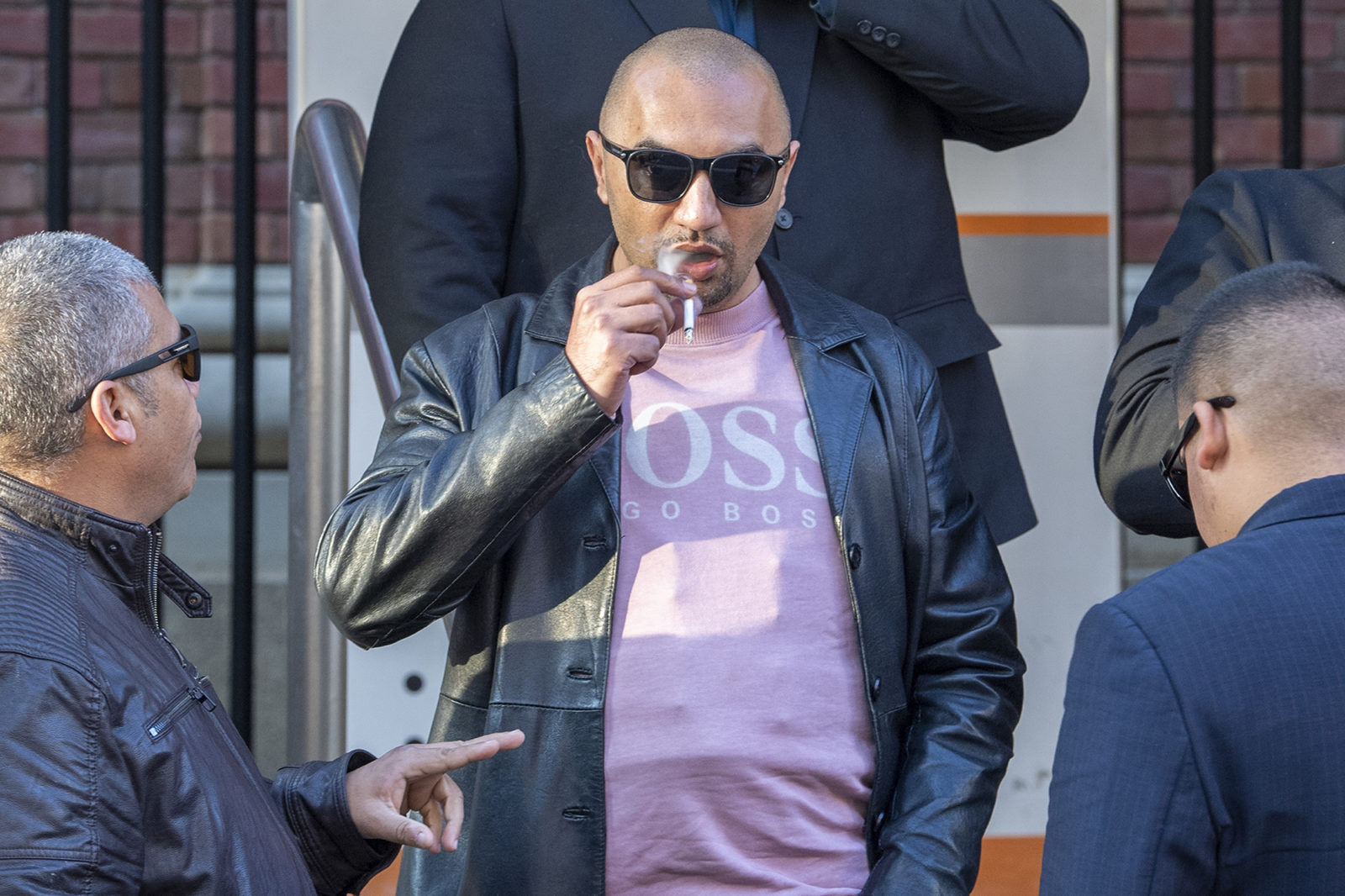 Nafiz Modack shows up at the Cape Town Magistrate's Court in Cape Town where he appears with his mother, Ruwaida Modack, and former police officer Brigadie Colin Govender on charges of racketeering and money laundering. Modack was surrounded by bodyguards. photo: Jaco Marais

As the criminal charges against Cape Town’s suspected underworld figures come thick and fast, it’s hard to keep track. We take look at the overall landscape and picks out the salient features

The underworld centred on Cape Town has for years been viewed as divided into two main rival factions. On the one side, there is the suspect Nafiz Modack; on the other, Mark Lifman.

The condensed version of how they allegedly became rivals goes along these lines: In the 1990s, nightclub security in Cape Town was dominated by rumoured intelligence operative Cyril Beeka, who was close to Modack. Beeka was assassinated in 2011.

Lifman and men linked to him subsequently became dominant in the bouncer industry.

In 2017, Modack and others linked to him allegedly tried to muscle out the so-called Lifman group.

Since 2017, Modack has been arrested several times and made many court appearances. Lifman, compared to previous years, not so much.

But now, for the first time and at the same time, both – as well as several suspects allegedly linked to them – face an array of criminal charges.

Fresh arrests in this domain have been carried out in Cape Town since December 2020, starting with Lifman and culminating in Modack’s re-arrest at the end of April 2021.

Court cases developing from these arrests are set to provide an unprecedented glimpse of a swathe of crimes the state will likely try and piece together – and this, in turn, may show just how tightly a web of organised crime has been spun around the city.

Adding to this murk is that, on each side of these alleged underworld groups, a police officer previously stationed at the Anti-Gang Unit (AGU) has been arrested, suggesting that both supposed underworld factions infiltrated the unit.

The AGU was launched in November 2018 and is headed by Major-General André Lincoln. In the 1990s, Lincoln investigated alleged underworld figures, including Beeka, in a saga that later led to Lincoln himself being convicted and later acquitted of crimes.

Among the AGU’s members was Lieutenant-Colonel Charl Kinnear, who was investigating underworld crimes stemming from the Western Cape and stretching to Gauteng (and likely further afield) when he was assassinated on 18 September 2020 outside his Bishop Lavis home in Cape Town.

In one of the latest clampdowns, Modack, who has previously escaped conviction, was arrested again on 29 April 2021.

Alongside Ricardo Morgan and Jacques Cronje, a veteran bouncer who previously worked with Beeka, Modack faced initial charges relating to money laundering, extortion and kidnapping. He was also charged in connection with an incident in which shots were fired at attorney William Booth on 9 April 2020. Booth was unharmed.

The Booth attempted murder case further extends to suspect Zane Kilian, who is accused of illegally tracking Booth’s cellphone, as well as that of Kinnear. Kilian is also charged in connection with Kinnear’s murder.

Meanwhile, Modack, in a separate case, was also accused of turning an AGU member, Sergeant Ashley Tabisher, by effectively bribing him and seeing to it that Tabisher leaked AGU investigation details about Modack to Modack. At the time of his arrest in early May 2021, Tabisher was stationed with the police’s Tactical Response Team.

Modack was also charged in what, at first glance, appears to be an intricate case centred on a hand grenade discovered outside Kinnear’s home in November 2019.

This case initially seemed complicated because one of three other suspects arrested in connection with it, Amaal Jantjies, alleged during her bail application that AGU head Lincoln, with Kinnear’s knowledge, had staged the grenade incident. This seemed to be an attempt, as alleged by Jantjies, to pin the blame of this on someone they wanted to take down.

The state argued that Modack, with Jantjies’s help, was actually behind the grenade incident. This case, therefore, based on its current status in court, is a basic tale of two sides: a suspect accusing a cop of complicity and the state accusing the suspect of lying.

Aside from these charges, Modack also faces charges in Gauteng, along with several former and current police officers based there. In this matter, he was arrested in June 2020.

Modack and his co-accused are charged in connection with allegations that cops fraudulently created firearm licences for suspects.

Before all this, Modack faced charges alongside former policeman Kollin Govender, who in 2019 pleaded guilty to corruption charges relating to his dealings with Modack. It was understood this case against Modack may proceed in July.

When Modack made his first court appearance after his latest arrest, among those present were Police Minister Bheki Cele and Western Cape detective head Major-General Jeremy Vearey. Cele was apparently not present when Modack’s alleged rivals, including Lifman, made their first appearance following their recent arrests.

Lifman and his associate Jerome “Donkie” Booysen, as well as suspected 27s gang boss William “Red” Stevens, were arrested in December 2020. Stevens was subsequently murdered in a shooting.

More men were soon charged alongside Lifman and Booysen, including André Naude, a well-known figure in Cape Town’s bouncer circles, and a policeman, Wayne Henderson.

Henderson was initially based at the AGU, but at some point was transferred to the Sea Point police station.

They, and the others with whom they are charged, are also accused of contributing to a pattern of criminal activity; it was alleged they did so to benefit, at the direction of, or in association with, the 27s gang.

Another suspect previously arrested for Wainstein’s murder was one Matthew Breet, who subsequently entered into a plea deal with the state and was sentenced to 20 years in prison.

This is where the charges against Henderson fit in. As alleged in the charge sheet in the case, Henderson was accused of assisting Breet “by suggesting an exculpatory version which he was to give up if he was required to make a warning statement to the police on a charge of possession of unlicensed firearm and ammunition”.

Simply put, Henderson was accused of colluding with Breet.

The overlaps – and claims against cops

During previous court proceedings in which Modack was the focus, it emerged that he had claimed that Kinnear and Vearey (two officers who were investigating him) were on the payroll of Lifman and Booysen.

Modack, the court heard, had also claimed that Vearey had worked with “Red” – presumably William Stevens, who was charged alongside Lifman and Booysen in the Wainstein case – to have an attorney, Noorudien Hassan, murdered in November 2016.

In retrospect, following the December 2020 arrests of Lifman, Booysen and Stevens, the claims against Vearey point to him being part of the group that, the state alleged, worked with the 27s gang.

Vearey, who has previously claimed he has been the target of smear campaigns concocted by both suspects and police officers, has not been charged.

Meanwhile, the claims against Lincoln that emerged in court – that he set up the grenade attack on Kinnear – are reminiscent of the late 1990s, when he led investigations into Beeka, Modack’s ally, and others.

Lincoln was accused of crimes around the time he was investigating Beeka and the others, but he countered that fellow police officers were trying to frame him. Lincoln went on to be convicted of several crimes, but he appealed the conviction and was eventually acquitted.

This time around, as these underworld investigations have developed, police officers have again been charged. These officers, Tabisher and Henderson, were both once members of Lincoln’s AGU – so Lincoln’s previous claims that colleagues of his in the police had effectively turned on him may now be taken more seriously.

But time will tell whether history repeats itself with charges relating to police officers – and whether these will stick.

In February 2020 Modack, Cronje and two other co-accused (a fifth was murdered) were acquitted of extortion charges relating to private security.

Modack faces charges relating to various cases. These include: an investigation into a network involving cops in Gauteng allegedly creating fraudulent firearm licences for suspects; allegations he effectively bribed an Anti-Gang Unit cop in the Western Cape; involvement in the attempted murder case of an attorney in April 2020; allegations he was involved in a case centring on a hand grenade discovered outside cop Charl Kinnear’s home in November 2019; and charges including kidnapping and extortion.

Sergeant Ashley Tabisher was arrested at the start of May 2021 for allegedly accepting money in exchange for supplying Modack with information about Anti-Gang Unit investigations into Modack.

In June 2020, 16 suspects – including eight police officers and two former cops from Gauteng, as well as six others including Modack – were arrested. Two Gauteng station commanders were also subsequently detained. This related to allegations of cops fraudulently creating firearm licences for suspects.

In late 2015 Lifman and Naude were acquitted of more than 300 charges relating to their having allegedly run a private security company without it being registered as required by law.

Lifman and Booysen face charges relating to the August 2017 murder of international steroid dealer Brian Wainstein, who was assassinated in Constantia.

Together with a group of other suspects, they are accused of working with the 27s gang.

Policeman Wayne Henderson, once stationed at the Anti-Gang Unit, became a suspect in the case against Lifman and his co-accused around February 2021. The state alleged Henderson effectively colluded with two other suspects accused in the Wainstein murder matter.

In February 2021 Booysen was arrested with five others in connection with Mandrax dealing. Among the five is Clinton Langeveldt, a former City of Cape Town law enforcement officer who reportedly resigned after he was initially arrested in November 2017. DM168

‘South Africa has an opportunity to reset its Israel-Palestine bias’