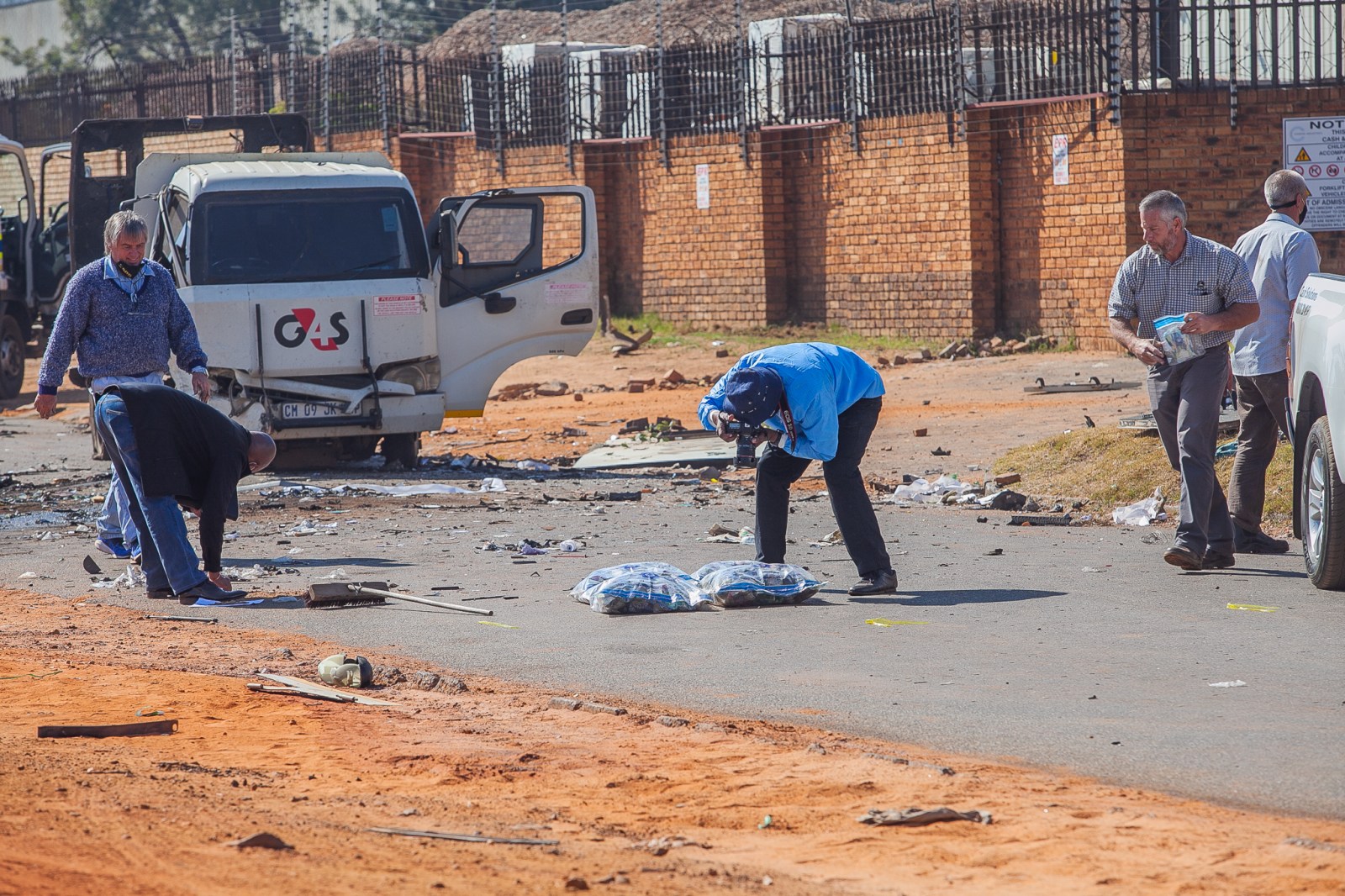 A general view of a crime scene after a cash in transit robbery on June 03, 2020 in Krugersdorp, South Africa. Allegedly, a group of suspects attacked a cash-in-transit van with the use of explosive in Kagiso Drive. The suspects were reported to have escaped with an undisclosed amount of money. Cash was scattered on the road which led to looting by the community. (Photo by Gallo Images/Sharon Seretlo)

Since January 2021, there have been almost 90 cash-in-transit heists nationally, in which five industry employees have lost their lives. As those in the cash in transit industry blame joblessness and a broken legal system for this form of criminal activity, the perpetrators are becoming more violent and organised.

And from the beginning of 2021 to the end of April, 87 (nearly one a day) cash-in-transit (CIT) heists have occurred. Five CIT employees have died in the heists.

This was according to Grant Clark, the head of operations at the Cash-in-Transit Association of South Africa (Citasa).

In the month of April, there were 29 incidents of CIT crime. Four of these happened in the Western Cape, which is unusual for the region, said Clark, adding that the region had experienced a lull in CIT crime relative to the rest of the country.

The Citasa together with SAPS are working hard to stabilise the region once again, he added.

While CIT companies are spending millions on training their employees to counteract the criminals, Clark said, the groups of perpetrators are getting bigger; they are highly organised with military precision and are becoming more violent.

Besides CIT-related crime causing havoc on citizens and causing logistical issues, “when it comes to the staff that go out on a daily basis… With the number of incidents taking place, those guys fear for their lives on a daily basis,” Clark said.

Clark linked the recent crime activity in the CIT space to joblessness and the subsequent socio-economic problems in the country.

But according to Deon Coetzee, spokesperson for the tactical defence-training group Fortis, the increase of CIT crime can be placed squarely on the shoulders of a corrupt and inept government.

The Fortis group is highly positioned in the training of employees of CIT companies, including research and the supply of equipment to help curb the crime, Coetzee said.

Two weeks ago, video footage of a CIT driver averting an attack on the vehicle he was driving in Pretoria began circulating on social media. The driver, Leo Prinsloo, who is part of the Fortis group and a colleague of Coetzee’s, prevented a heist from taking place through swift response.

Prinsloo was not willing to speak to the media at the time of writing due to the toll that the attack — including the attention it received — was taking on his well-being. This is according to Coetzee, who is talking to the media on Prinsloo’s behalf.

The investigation of CITs is mandated exclusively by the Hawks and are investigated from the scene of crime, Nkwalase said.

Of these, cross-pavement attacks are the most prevalent followed by vehicle-on-road attacks, which Nkwalase called “the headline grabbers”, since they involve the use of extreme violence and often large amounts of cash are taken.

Own-premises attacks are rare but very large amounts of cash are taken during these incidents as well, he said.

According to Nkwalase, the basic modus operandi of attackers has remained the same, with the exception of vehicle-on-road attacks that have seen a return to the use of vehicles to ram the CIT trucks and bring them to a standstill.

“These crimes have and always will include extreme violence,” said Nkwalase.

The criminals are always heavily armed — with some incidents involving rifles of the calibre of AK47, R4s and R5s — and explosives are often involved to bomb the banks or CIT armoured vehicles.

Earlier this year in February, a new tactic of strapping explosives onto a CIT guard was seen during a heist targeting nine Absa ATMs in the Strand and Gordons Bay areas in the Western Cape.

The modus operandi has not been copied, Nkwalase said.

“These criminals are parts of syndicates, and they operate on a completely different level — we are talking organised, international crime here. They will not hesitate to take any and all lives of people standing in their way,” Coetzee said.

Coetzee added that a total breakdown of the legal system has made South African a haven for CIT syndicates, where “in most of these CIT heists we find metro cops and SAPS members involved”.

But according to Nkwalase, the criminal groupings involved in CIT crime are not formally structured syndicates per se. “[They] are loose groupings who interact with one another and share resources and expertise,” Nkwalase said.

Vehicle-on-road and own-premises attacks are executed by these criminal groupings after extensive planning, whereas cross-pavement robberies are more opportunistic of nature, with a low level of planning and usually do not involve the criminal groupings seen in the other two cases, Nkwalase said.

According to Clark, the Citasa is working very closely with CIT companies and with SAPS, especially the Hawks and Criminal Intelligence, to apprehend the perpetrators of these crimes and bring them to book.

“Trying to fight this war from the bottom as we are currently doing will have zero effect,” he said. DM