Ten years from Tatane to Ntumba: It is time to take rubber bullets out of protest policing 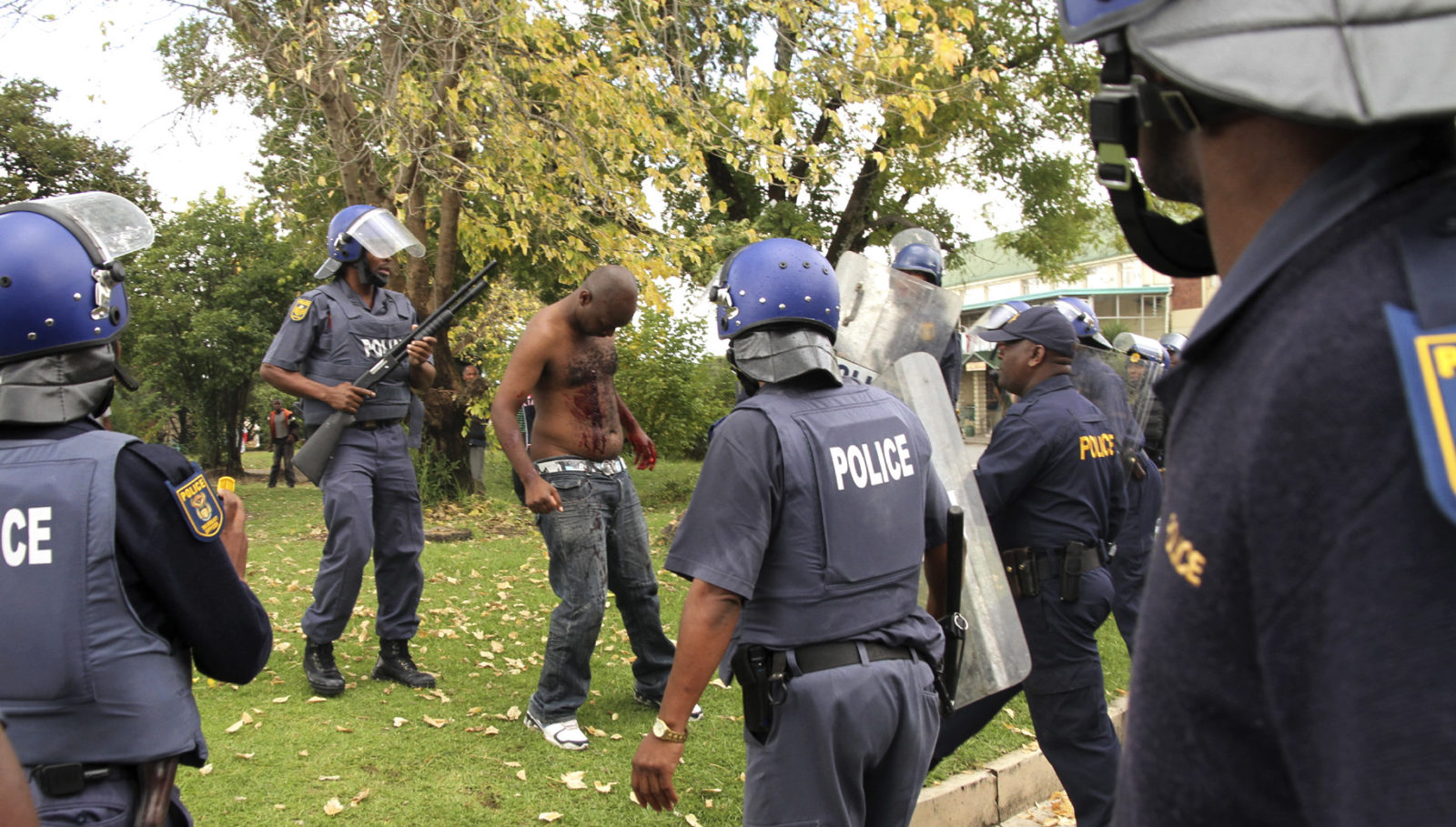 Andries Tatane after he had been shot by the police with rubber bullets in Ficksburg on 13 April 2011, after service delivery protests turned violent. Tatane died on the way to the hospital. (Photo by Gallo Images/Beeld/Willem van der Berg)

The death of Andries Tatane in 2011 should have brought an end to the police’s use of rubber bullets in public order policing, as should the report of the Marikana Commission of Enquiry. The recent death of Mthokozisi Ntumba would have been prevented if this had been done, and once more shows the urgency of the call to stop their use.

Ben Winks is an independent advocate specialising in constitutional and international law, and a visiting researcher at the University of Johannesburg.

Ten years ago, South Africans watched in horror as major news outlets broadcast blow-by-blow footage of the brutal killing of Andries Tatane.  The 33-year-old maths and science teacher from Ficksburg in the Free State had been leading a peaceful community protest against water shortages and other government failures.

We watched him being pummelled with batons by half a dozen armoured policemen and shot in the chest from less than 2m away with a shotgun round of rubber pellets. We then watched him bleed, stumble, collapse and take his last breath. He left behind a wife, two children and a community clamouring for answers and accountability.

Our humanity compels us to assume that the officer who fired the fatal shot did not intend to kill Tatane (who was not being violent), but to subdue him. His superiors had perhaps failed to train him to know that rubber bullets can be deadly, especially when fired at close range and aimed above the waist. We will never be able to ask him: We do not know who he is. This is because rubber bullets are not traceable to a specific weapon. Coupled with the fact that the police were all wearing identical helmets with visors, this made it impossible to identify who shot Tatane. And that is why all seven officers charged in connection with his death were acquitted and are still employed by the South African Police Service (SAPS) today.

But when they descended on Ficksburg in 2011, the police should already have known that their rubber bullets were deadly, and grossly inappropriate for managing mass protests.

Rubber bullets were first devised by the British military in 1970 to quell protests in Northern Ireland by Catholics agitating for independence from the UK. Despite claiming that rubber bullets were relatively safe for use against civilians, they were banned in Britain. Their lethal potential was revealed almost instantly. After maiming many people from the outset, rubber bullets killed an 11-year-old boy in 1972, and two young men in the year that followed.

In 1975, the British replaced rubber with plastic bullets, claiming they were less dangerous. But that same year, a plastic bullet killed a 10-year-old boy in Belfast. By 1990, plastic bullets had killed 14 people in Northern Ireland, half of them children, and seriously injured countless others.

That year, the United Nations adopted the Basic Principles on the Use of Force and Firearms by Law Enforcement Officials, which called on governments to develop “non-lethal incapacitating weapons for use in appropriate situations, with a view to increasingly restraining the application of means capable of causing death or injury to persons”.

In Northern Ireland, plastic bullets were finally discontinued in 2005, largely owing to the efforts of the United Campaign Against Plastic Bullets, co-founded by Emma Groves, a Belfast mother who had been completely blinded by a rubber bullet in 1971. Since 2005, Northern Ireland police have used “attenuating energy projectiles”, which have hollow tips that make the bullets collapse on impact and cause less damage. They are also no longer allowed to be used for crowd control but only targeted at “individual aggressors”.

Despite these developments abroad, South African public order police officers continued to fire rubber bullets with unbridled abandon. If they did not know of their lethal potential before, Tatane’s death should have removed any doubt. But they were unmoved. In 2013, police were deployed to a farmworker protest in De Doorns in the Cape Winelands.  Among other casualties from rubber bullets, Letsekang Thokoane lost his life and Mzukisi Mdlulwa lost an eye. Neither of them had even been taking part in the protest. Nobody was prosecuted.

In 2014, the SAPS adopted a National Instruction stating that “approved rubber rounds may only be used as offensive measures to disperse a crowd in extreme circumstances, if less forceful methods have proven ineffective”. But this is not good enough, and in fact gives the police a licence to open fire indiscriminately on unarmed groups, rather than on specific individuals who pose an imminent threat to life and limb.

A 2016 scientific study by Physicians for Human Rights, Lethal in Disguise, condemned the use of kinetic impact projectiles (of which rubber bullets are regarded as the most lethal):

“Kinetic impact projectiles (KIPs) in general are not an appropriate weapon to be used for crowd management and, specifically, for dispersal purposes; most cannot be used effectively and safely against crowds. At close ranges, levels of lethality and patterns of injury of some KIPs become similar to live ammunition.

“Indiscriminate KIPs that fire multiple projectiles, such as shotgun pellets and other types of ammunition, should be prohibited in the context of protest. It is virtually impossible to deploy these safely and effectively against crowds or individuals.”

In 2020, the United Nations High Commissioner for Human Rights adopted the Guidance on Less-Lethal Weapons in Law Enforcement. It declares unambiguously:

With specific reference to kinetic impact projectiles, it states that they may be used “only in direct fire with the aim of striking the lower abdomen or legs of a violent individual and only with a view to addressing an imminent threat of injury”.

So, the SAPS National Instruction is not only inadequate for failing to include guidelines like this, but is also manifestly unlawful as it authorises the firing of rubber bullets “to disperse a crowd”.

On 10 March 2021, police were dispatched to Braamfontein in Johannesburg, where a few dozen unarmed youngsters were protesting about university fees and historical student debt. The police soon confronted them and began trying to disperse them with water cannon and smoke grenades.

Nearby, a 35-year-old town planner named Mthokozisi Ntumba walked out of a clinic onto the pavement. Moments later an armoured police vehicle screeched to a halt a few metres away, and at least two officers leapt out with shotguns drawn. Video footage shows them firing indiscriminately at people standing on the pavement. Ntumba was struck in the chest by three rubber bullets, began bleeding, and called out for help. The police sped off. Ntumba collapsed face-down on the pavement and died within minutes.

Ntumba had done nothing to court danger, but found himself in the wrong place – and, let’s face it, the “wrong” skin – at the wrong time.

Police Minister Bheki Cele was at a loss. He said that there was “no grain of explanation” for Ntumba’s death, except that “somebody just went crazy”.

But two weeks later, Cele inadvertently revealed a far more disturbing explanation. He unveiled the Report on Policing and Crowd Management by an expert panel appointed in 2016, as directed by the Marikana Commission of Inquiry. (The report had been completed in May 2018, but was inexplicably concealed from the public for almost three years.)

At the press briefing where he unveiled the panel report, Cele was specifically asked about the bullets used to kill Ntumba. He replied that “the use of rubber bullets as a means of crowd-control management is being looked into urgently”. National Police Commissioner General Khehla Sitole quickly qualified this by saying “we are not going to stop the use of rubber bullets, but we are going to change the standard operating procedures”.

Cele and Sitole were being both dishonest and disrespectful to the memory of Ntumba.

First, it cannot be true that the use of rubber bullets was “being looked into urgently”, because the panel report was completed almost three years earlier, yet the minister and the SAPS had apparently done nothing to implement the panel’s recommendations. They had not even amended the National Instruction to say that rubber bullets should only be fired below the ribcage, and only fired at close range in life-threatening situations. They could have done this, with a simple stroke of a pen, in 2018. If they had done so, Ntumba might still be alive today.

Second, when Sitole said “we must be open and frank that it will be impossible to stop the use of rubber bullets”, he was being anything but “open and frank”. The panel report explicitly referred to the Northern Irish experience of replacing rubber and plastic rounds with attenuating energy projectiles, and recommended that the SAPS explore this possibility. Yet, for nearly three years the SAPS evidently defied this recommendation and even concealed it from the public.

If the SAPS had replaced rubber bullets with safer projectiles when this was recommended, Ntumba would most likely still be alive. His widow would still have a husband and his three young children would still have a father. So, Cele was fooling us, and possibly himself, when he said that there was “no grain of explanation” for his death. The explanation is plain – the minister and the SAPS were simply too indifferent or indolent to take up the panel’s recommendations. And, because of that failure, an innocent man was killed on their watch, under their command.

The truth is that the police should have stopped using rubber bullets in public order policing many years ago – at the very latest after Tatane was killed in 2011, if not earlier (considering that attenuating energy projectiles were widely available by 2005).

The death of Tatane did not move the police to reconsider the use of this lethal ammunition on unarmed civilians. Neither did the post-Marikana panel report.

We may only hope – no, we must demand – that the killing of Ntumba will finally move them to take rubber bullets out of protest policing. Immediately. DM/MC

Disclosure: Winks is part of the legal team acting for the family of Mthokozisi Ntumba.