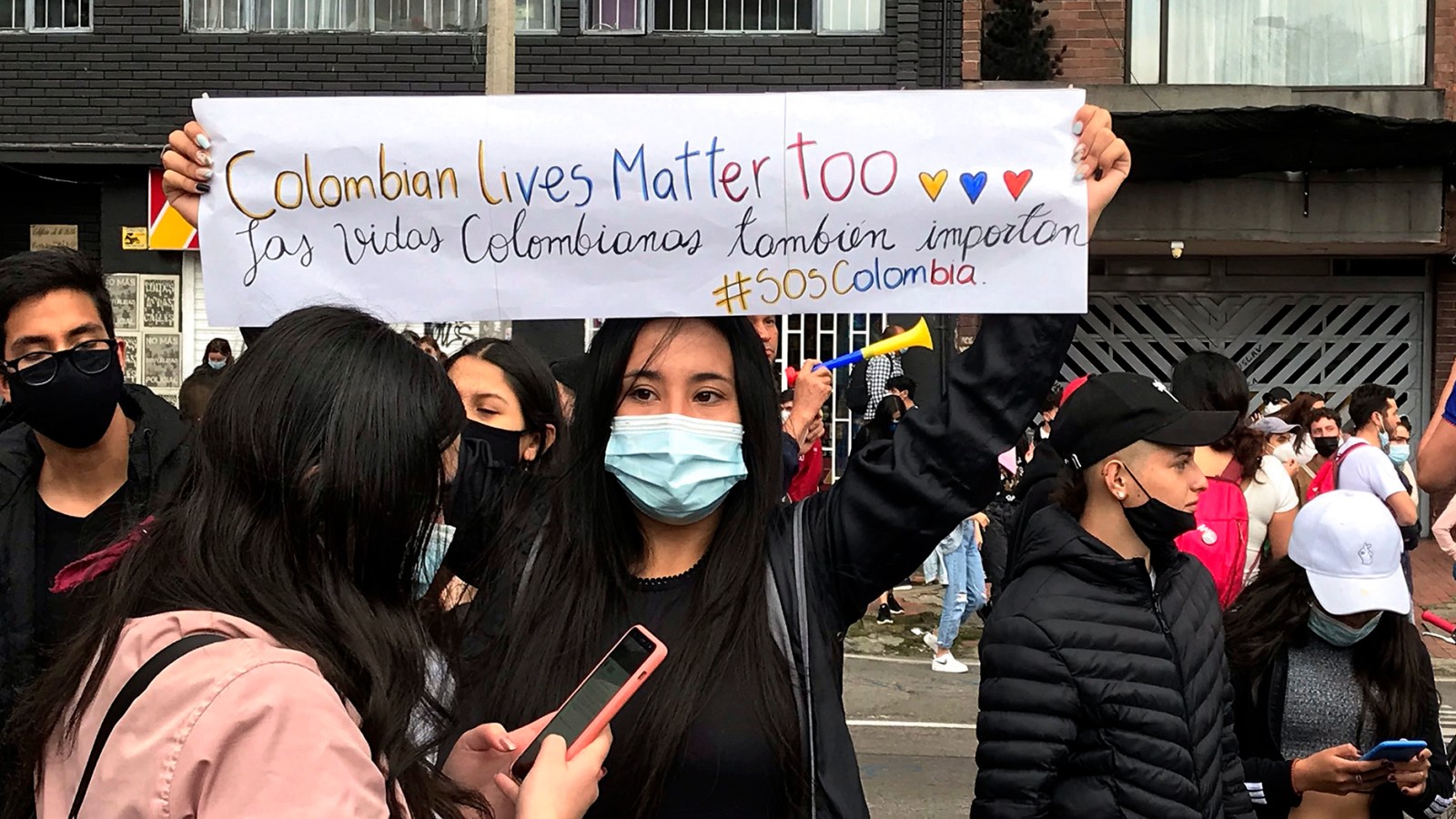 A student at a protest march in Bogota, Colombia. Her sign bears the hashtag #SOSColombia, which has become synonymous with the protest. (Photo: Laura Brown)

Widespread protests across Colombia showed no sign of easing as they moved into the third week, with the government and protesters far from reaching any type of agreement.

Laura Brown is a freelance writer and editor from South Africa, currently based in Colombia.

The demonstrations began with a general strike on 28 April 2021 in response to a proposed tax reform that would have plummeted people already struggling in the face of the pandemic further into poverty.

While President Iván Duque has since scrapped the tax reform and the finance minister responsible for it resigned, the list of demands has grown and also includes access to healthcare, free university education, a ban on fracking and for the government to uphold the terms laid out in the peace treaty and take concrete action to support social leaders.

In 2016, former president Juan Manuel Santos signed a peace deal with the Revolutionary Armed Forces of Colombia (known by their Spanish acronym, FARC), signalling an end to more than 50 years of armed conflict. But many feel that little has changed in the past five years and are frustrated with the government’s lack of follow-through with the peace accord and failure to create education and employment opportunities, provide healthcare and protect social leaders. According to Colombian research NGO Indepaz, 60 social leaders and 20 FARC ex-combatants have been killed so far in 2021.

The mass civil movement has been dubbed the “Colombian Spring”, a reference to a wave of civil unrest that swept through much of the Arab world in the early 2010s. With hundreds of thousands of people taking to the streets, this has become the largest mobilisation of its kind in the country’s recent history, with people from different social classes and walks of life joining the uprising – also a first in a country where protests have traditionally been the domain of working classes and students from state universities. This time, however, a broader range of citizens have raised their voices to call for change, which might just mean a tipping point that will push the government to follow through with reform.

At the root of the discontent is deep inequality – the South American nation is one of the most unequal countries in the world – corruption, poor service delivery and exclusion of citizens in political processes. All these frustrations have been exacerbated by the Covid-19 pandemic, which brought on social and economic hardship for millions who have not been able to work for more than a year.

Colombia and South Africa have many similarities:

Furthermore, while South Africa has had a head start on the road to reconciliation, both countries are recovering from decades of conflict – namely apartheid, and a bloody civil war in Colombia that left high levels of distrust and fragmentation among the population.

After 10 days of protest and growing pressure to respond to protesters and adopt a more inclusive approach to politics, Duque set up discussion tables for student activists, union leaders and strike organisers to voice their concerns and try to figure out a united way forward. On Tuesday, he announced plans to make university free for students from low-income families.

The protests are taking place in the context of a third wave of the pandemic, where hospitals in several cities have been overwhelmed and are at breaking point. In a country marked by deep inequality, politics and political decisions are often polarised along class lines, with those at the higher end of the income scale seen as wanting to hold on to the status quo and those at the lower end perceived as looking for handouts. Poverty levels in Colombia reached 42.5% – an increase of 2.8 million people living in extreme poverty since the Covid-19 health crisis began, forcing businesses to shut down and hurting informal workers badly. The government is also perceived as looking out for the interests of the elite and maintaining or further deepening the equality gap.

These divisions can be seen quite starkly in Colombia’s third-largest city, Cali, where bloody protests and violent clashes with police have turned the poorest neighbourhoods into warzones. Rights groups have denounced internet blackouts in these areas, which are believed to be part of a censorship campaign. Internet watchdog NetBlocks confirmed disruption to the internet service in Cali last week, prompting condemnation from the United Nations.

Meanwhile, in the richest neighbourhoods the protest has been more of an inconvenience, with residents voicing their annoyance at the road closures and food and fuel shortages caused by truck drivers blocking roads in and out of the city.

Over the weekend, as a group of indigenous people – known as a minga – from the outlying rural areas approached the city to join the protest, residents from the richest neighbourhood decided they had had enough of the strike and the inconvenience it had caused and took matters into their own hands, opening fire on the indigenous guard. Video footage has been circulating showing the police standing by as armed civilians shoot at the group of rural dwellers. At least a dozen people were injured, most of them members of the minga.

Responding to pressure from the mayor of Cali, Duque paid a short visit to the southwestern city in the early hours of Monday to meet high-level officials. He vowed to send additional security forces to remove the blockages and ordered the indigenous people to return to their homelands to avoid further confrontations.

Outspoken former president Álvaro Uribe has also been accused of inciting violence after he posted a tweet in the early days of the protest saying: “Let’s support the right of soldiers and police to use their firearms to defend their integrity and to defend people and property from criminal acts of terrorist vandalism.” Twitter swiftly deleted the message, but the damage had been done. Always a controversial figure, Uribe gained infamy during his time in office for the formation of death squads – paramilitary groups meant to tackle narcotics traffickers and dissidents. His legacy left a long list of claims against him – including accusations of killing thousands of innocent civilians – and split the voter population into two main camps: “Uribistas”, typically right-wingers who support the former headman and his strong-arm policies, and liberals who, owing to their left-leaning rhetoric, are often accused of socialism and wanting to turn the country into “another Venezuela”.

According to local NGO Temblores, there have been at least 39 deaths, 548 people reported missing and close to 300 reports of police violence since the start of the strike. Human rights organisations have called for calm from both sides and condemned the use of excessive force by police and the Colombian riot squad, ESMAD. Protesters have been accused of vandalism and trying to set a police station alight with police in it. Demonstrators have also pulled down statues of figures seen as symbols of colonialism and oppression, while the government claims that demonstrations have been infiltrated by illegal armed groups involved in the cocaine trade, dissidents and guerrillas.

Colombians and allies across the world have held solidarity marches denouncing the violence and calling for international support. MC/DM