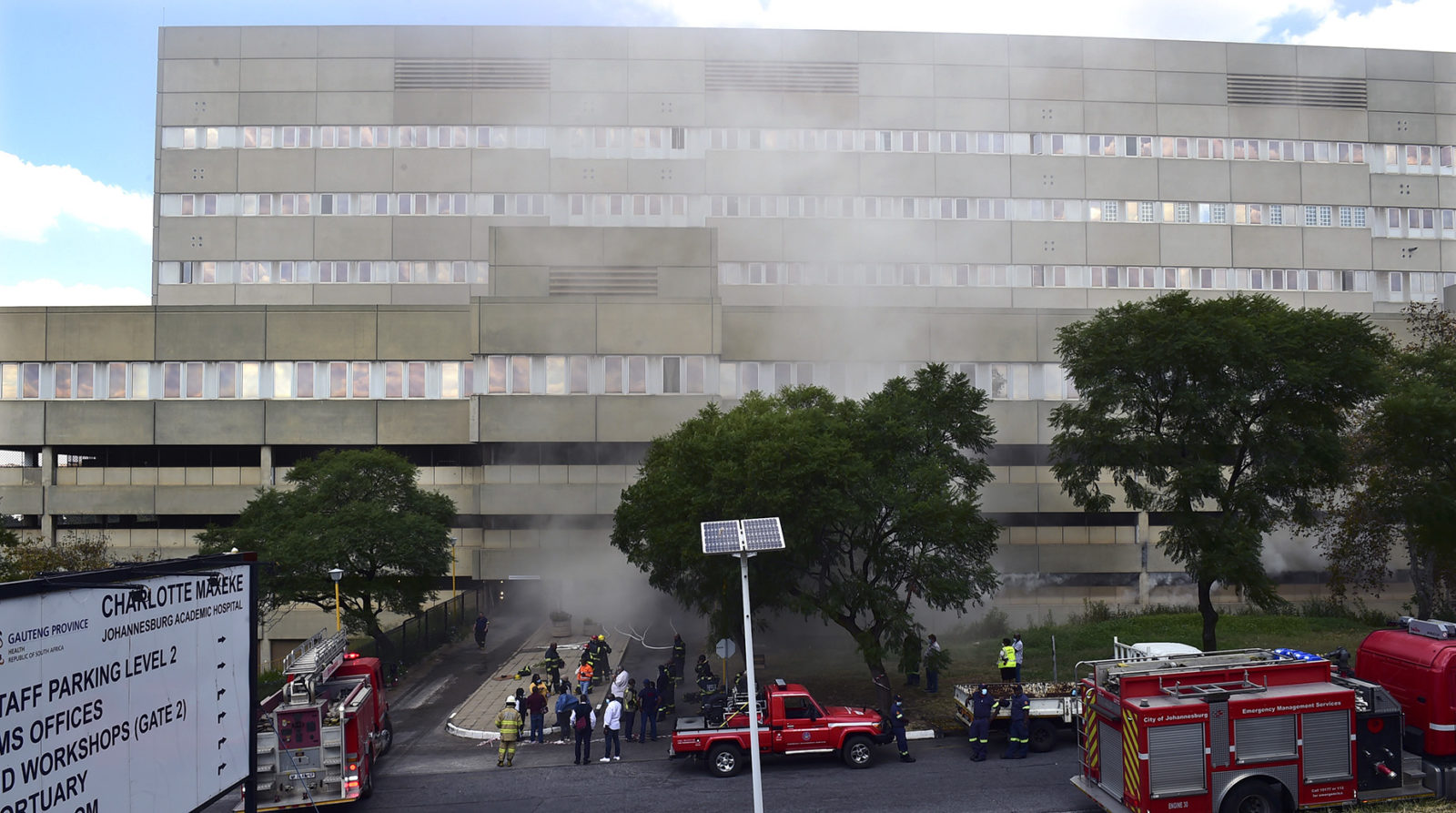 A fire broke out on 16 April at Charlotte Maxeke Hospital in Johannesburg, shining the spotlight on health and safety in public hospitals. (Photo: Gallo Images / Daily Sun / Morapedi Mashashe)

As Charlotte Maxeke Hospital missed its reopening date this month after a fire in April, there are concerns that the true cost of the blaze is still to be counted and that it is just another indication of a health department and fire service in crisis.

Just weeks before a fire tore through parts of Charlotte Maxeke Hospital in Johannesburg on 16 April 2021, a fire safety audit at the hospital was signed off and in March a hospital fire and safety team met, according to the Gauteng Department of Health.

Yet, Gauteng Health spokesperson Kwara Kekana also confirmed in response to questions from Spotlight that “the smoke doors are not used as the magnetic system on the doors was no longer effective and they were recommissioned”. Smoke doors are used to prevent the spread of smoke in a building when there is a fire.

She also confirmed that fire hydrant couplings were not compatible with the fire hoses on Johannesburg fire service fire engines because “some had been stolen”.

Spotlight has requested, but not received, a copy of the fire audit/inspection report from the Gauteng Health Department, the Department of Infrastructure and Development and the City of Joburg’s Fire Services.

Two senior firefighters from the City who spoke to Spotlight, say the two failings (mentioned by Kekana above) alone would sink a basic inspection or compliance audit. It was also not only the fire doors and the hydrant couplings that were faulty at Charlotte Maxeke. They say firefighters were not given building and floor plans of the hospital’s emergency exit plan when they arrived on the scene on the day of the fire. The emergency exit plan is essential for those needing to enter a burning building. Smoke-detection systems, fire alarms, sprinkler systems and the mechanisms that would have triggered the magnetic smoke doors were also not in working condition. And besides the non-compatible hose couplings there was also low pressure to the hydrants.

The two men asked to have their identities withheld.

The Charlotte Maxeke fire is the fourth in six years at public health facilities in Gauteng.

In February 2021, a fire broke out at Carletonville Hospital, in May 2019 there was a fire at Bheki Mlangeni Hospital in Soweto, and one at Tambo Memorial Hospital in Boksburg in May 2015. A blaze in September 2018 devastated the provincial health department’s head office in the Bank of Lisbon building in Joburg’s inner city.

That fire claimed the lives of three firefighters.

“These are politicians, they are telling lies and doing cover-ups – they must show you that inspection report for Charlotte Maxeke because they are sending us into these places to die,” says *Nathi, who has been in the fire service for 14 years.

“With fire doors, we call these lifesavers because they can help you trap a fire – these should have been there.”

Fire hazards in hospitals and other public buildings throughout the city are widespread.

*Richard, who has been with the Joburg fire service for 22 years, says these include lifts that have not been serviced for years; fire escapes that are obstructed and regularly used for makeshift storage and dumping space; fire extinguishers gathering dust or used as door stops; and facility health and safety committees who are slack on fire safety compliance, if they meet at all.

A fire service ‘in shambles’

Added to this, Nathi and Richard say their own department in the City’s fire service is in shambles. There are only four working fire trucks for the entire city. There has also been an ongoing political blame game, as well as a court battle: Former mayor Herman Mashaba’s multimillion-rand deal to procure specialised fire engines in 2019 was never delivered on. Then, in April 2021, the deal was ruled unlawful by the South Gauteng High Court.

Nana Radebe, spokesperson for Joburg Emergency Services, confirmed they currently have just over half of the equipment – 51 of 92 items – needed for the fire service to meet national fire safety standards (the SANS 10090). Radebe also says high levels of non-compliance to fire and safety by-laws within the city continue to be a headache for the 1,271 firefighters employed at the city’s 29 fire stations.

The procurement process for new fire engines is back at square one.

Nathi says the bottom line is that their ageing, depleted fleet cannot cope. This was clear when the province’s flagship health asset – Charlotte Maxeke Hospital – started burning on the Parktown ridge that early autumn day and the fire could not be brought under control swiftly enough.

“One fire truck holds 4,500 litres of water. It’s not enough for a fire on even one floor of a building of that size [and] that’s why we need fire hydrants to be working. Water is our weapon; without water, we will die,” he says.

When there are fires in hospitals, it is patients already in the most vulnerable state of being ill and who cannot be evacuated easily, who could die.

The Charlotte Maxeke Hospital fire adds to a long-standing and tightly knotted occupational health and safety crisis in the public health sector in the province.

Craig Househam, a retired professor of paediatrics and child health and former head of the Western Cape Health Department, was also part of Gauteng Premier David Makhura’s intervention team meant to devise a “recovery plan” for the province’s health department in 2018.

Househam serves on the board of the Office of Health Standards Compliance and the South African Health Products Regulatory Authority.

He said that in the provincial health department the problem is underpinned by accruals or spiralling cycles of unpaid debt that keep budgets constrained. “The tendency then is to look where the impact is not immediate and maintenance budgets and equipment budgets often suffer as a result.”

Househam added that in the case of Charlotte Maxeke, the building is also old. Built in 1979, it has not had the benefit of routine maintenance to extend its life.

Working out a strategy to solve the health and safety problems in the province begins with recognising that the maintenance of health facilities is a highly specialised area, Househam added.

“You need a strategy that puts the right people in the right places with the right expertise. They need to be given the powers and authority to do their job properly without interference. The solution lies in meritocracy.”

Laeticia Rispel, a professor of public health at Wits University, said what has been lost in the Charlotte Maxeke Hospital fire goes beyond what went up in flames and the millions it will take to rebuild.

“That day of the fire I felt a deep sense of loss because of the critical role that Charlotte Maxeke plays, and was playing, especially as the country has been preparing for a possible third wave of the coronavirus. I was also thinking of the students who are not able to complete their training and, of course, the patients, many of whom don’t have an alternative other than Charlotte.”

The Wits Medical School flanks the hospital which is the academic training ground for many of the university’s students.

For Rispel, the fire represents terrible gaps in oversight, leadership and accountability at all levels in the health system. She said bloated bureaucracies are adding to the fracture in government departments and she called out an entrenched culture of self-preservation in the public health sector – where people are “depressed and dysfunctional and doing just enough to stay under the radar”.

In addition, there was a fear of speaking out because of victimisation. This added to a lack of transparency and the absence of sustainable change.

“There are at least 29 senior posts at the hospital that need to be filled, so at the basic level we have a leadership vacuum. Then there’s a fracture between the Department of Health and the Department of Infrastructure Development that just creates bigger bureaucracies and less space for people like CEOs or HODs (when these positions are permanently filled) to make decisions and to implement change. And there’s a South African syndrome, it seems, of setting up yet another task team or another inquiry but no sustainable change or leadership management and governance,” Rispel said.

DA member of the provincial legislature Jack Bloom said the setback of damages and disruptions caused by the Charlotte Maxeke Hospital fire is just one of the latest blows to service delivery in Gauteng.

“Gauteng Health has estimated that it will cost about R6-billion to ensure health and safety compliance for all 32 public hospitals in Gauteng. This includes R394-million to fix Charlotte Maxeke Hospital – but little of this has been budgeted,” he said.

He also noted that in 2019, former Gauteng health MEC Dr Bandile Masuku, who was axed in October 2020, admitted that “no state health facility in Gauteng had been assessed as complying with the Occupational Health and Safety Act”. This included general machinery regulations, electrical installation regulations, firefighting equipment, lift regulations, storage, exits, stairs and aisles.

“We need to see the SIU (Special Investigations Unit) reports on corruption and mismanagement, we need to push for the premier’s own call for lifestyle audits, and there should be prosecutions in light of the Life Esidimeni tragedy,” Bloom said of the kind of overhaul needed in the province’s health department.

“Things are moving frustratingly slowly, but I am hopeful that [the SA Revenue Service] and civil action will be able to close in on some of the big fish and that we even start seeing criminal charges,” he said.

By mid-May Charlotte Maxeke Hospital had missed its initial target date to reopen some of its sections. DM/MC