By Kimberly Mutandiro for GroundUp• 13 May 2021 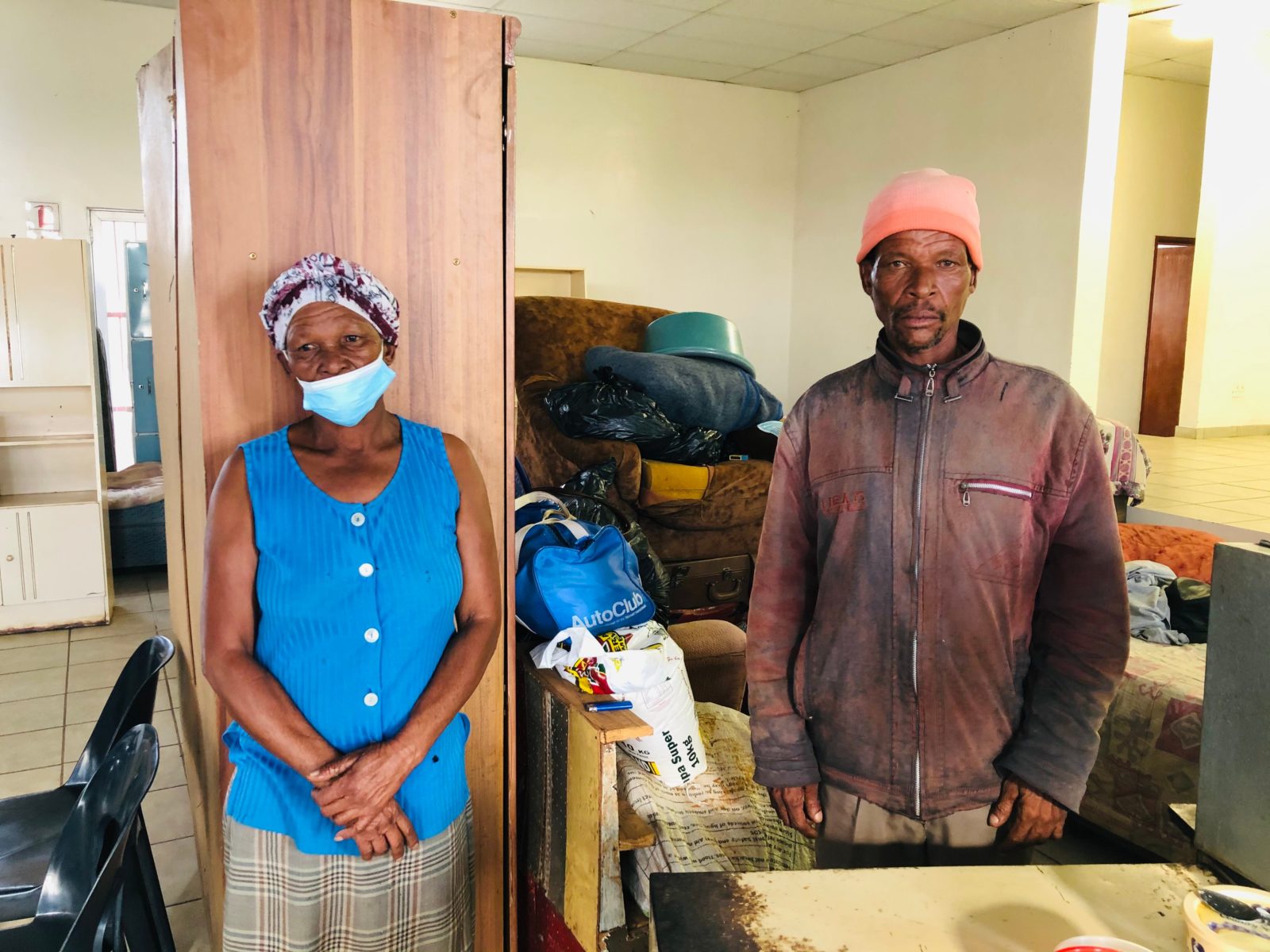 Lisbeth Blake and Andries Ntlatlana were among 46 people evicted from Blesbokfontein Farm in Ventersdorp, North West, two months ago. The Department of Land Reform and Rural Development says it will relocate the evictees to a new farm in June. (Photo: Kimberly Mutandiro)

The families have been living in community halls after spending nights on the roadside with their belongings.

Families evicted from the Blesbokfontein Farm in Ventersdorp, North West, two months ago, have been living in two municipal halls.

Some of the evictees and their families say they had lived and worked on the farm for between 20 and 60 years.

The 46 evictees, which include children, say their trouble started in 2016 when 39 of them were dismissed following a disciplinary hearing after they went on an unprotected strike over wages. They were subsequently dismissed but continued living on the farm. When the farm owner died two years later, they started getting eviction threats from the Pretorius family who had inherited the property.

On 3 July 2020, an eviction order was granted by the Land Claims Court in Randburg. According to the eviction order, the farm occupants — Tsakane Julius Moektketsi and 12 others — were asked “to vacate the farm, remove all possessions and movables (including livestock), demolish any structures erected on the farm and salvage material from such structures” within 14 days of the order.

The occupants remained on the farm and instead sought relief from the Department of Agriculture, Land Reform and Rural Development. The Ventersdorp Local Municipality who were also included in the case for assistance offered the group space in the township, but they refused, demanding to be moved to farmland.

After having lived on a farm for years they preferred farm life, where they could carry out agricultural activities to support themselves.

But on 30 March 2021, the occupants say they were taken by surprise when police knocked on their doors, instructing them to vacate. Despite pleading for more time to gather all of their belongings, the families say they were thrown out. They spent two nights outside on the side of the road near the farm.

The council and church leaders then allowed the families to stay in two halls while negotiations for their relocation were underway.

Lawyers for Human Rights (LHR), representing the farm evictees, say that although the eviction followed the legal process, the way in which the families were left out on the street was “undignified”. The LHR filed an urgent application on 2 April for the eviction order against the group to be suspended until the state finds them alternative housing.

Lawyer Louise du Plessis said their request was denied. However, on 14 April, the court ordered that alternative accommodation be provided for the families. Three follow up court hearings were conducted during which the department indicated that it was securing a portion of another farm for the evictees to live.

Eight of the children aged between eight and 14 were removed from their parents by the local social development officials and moved to a place of safety until suitable accommodation was found.

“The halls were deemed unfit for accommodating children. The children have not been attending school for the past year since the threats of eviction intensified. Their parents did not want the eviction to take place while their children were at school,” said Du Plessis.

Families miss life on the farm

Julius Moetketsi said he lived on the farm with his wife and children for 30 years. He said they are unemployed and were used to growing their own vegetables and keeping livestock to feed their families. “Now we have nothing to eat,” he said.

Moetketsi worked as a farm supervisor until 2016 when he and others were fired. He said they challenged their dismissals and reached a settlement of R22,000 per worker. He said this amount was too little to sustain his family.

Jan Seleke said he was born on the farm in 1957 and raised his three children there too. He struggles to walk after he was allegedly injured on duty. His parents are also buried on the farm.

“l spent my whole life there. My parents were born on the farm. I thought we were going to stay forever. I am sick and feel uncomfortable living in this hall,” he said.

He said he was forced to leave his chickens behind during the eviction.

Lisbeth Blake and her partner, Andries Ntlatlana, said they lived on the farm for 30 years. Her children aged 12 and 14 were among the eight removed by social workers. “I miss my children,” she said.

“The way we were evicted stripped us of our dignity. For years we suffered injustice as we were unfairly dismissed. If the government can buy us a farm, we will be able to work for ourselves,” she said.

Barnard Incorporated Attorneys, for the new farm owners, told GroundUp that the government had a constitutional obligation to arrange for alternative accommodation for the group prior to the eviction. The families were evicted in terms of the Extension of Security of Tenure Act.

Hans-Julie Moolman of Barnard Incorporated Attorneys explained that the “occupiers got the right to stay on the farm as farmworkers”. Their employment ended after an unprotected strike during the planting season.

“The occupiers were to leave the farm six months after the settlements were paid. They stayed on the farm unlawfully and the owners applied for an eviction order,” said Moolman.

“Our client is now faced with active funds of the court case exceeding R500,000,” he said.

On Monday, a hearing was held in the Land Claims Court in Randburg to discuss the group’s relocation to more suitable accommodation. Lawyers representing the Department of Rural Development and Land Reform, who were asked to intervene, told the court that the families will move to a new location in June.

John Mashaba, Operations Manager for the department, told the court that they secured 205 hectares at the Hartebeesfontein farm in the Matlosana Municipality. He said plans are now underway to erect a temporary structure on the farm and that low-cost houses would be built there in the future.

“We went to the farm to map out the sites where a temporary structure will be erected for the relocation. We hope to secure material before the end of the month … We have given ourselves the deadline of 2 June to relocate the families,” said Mashaba.

The court adjourned until 17 June when lawyers for the department are expected to give a final update on the relocation. DM