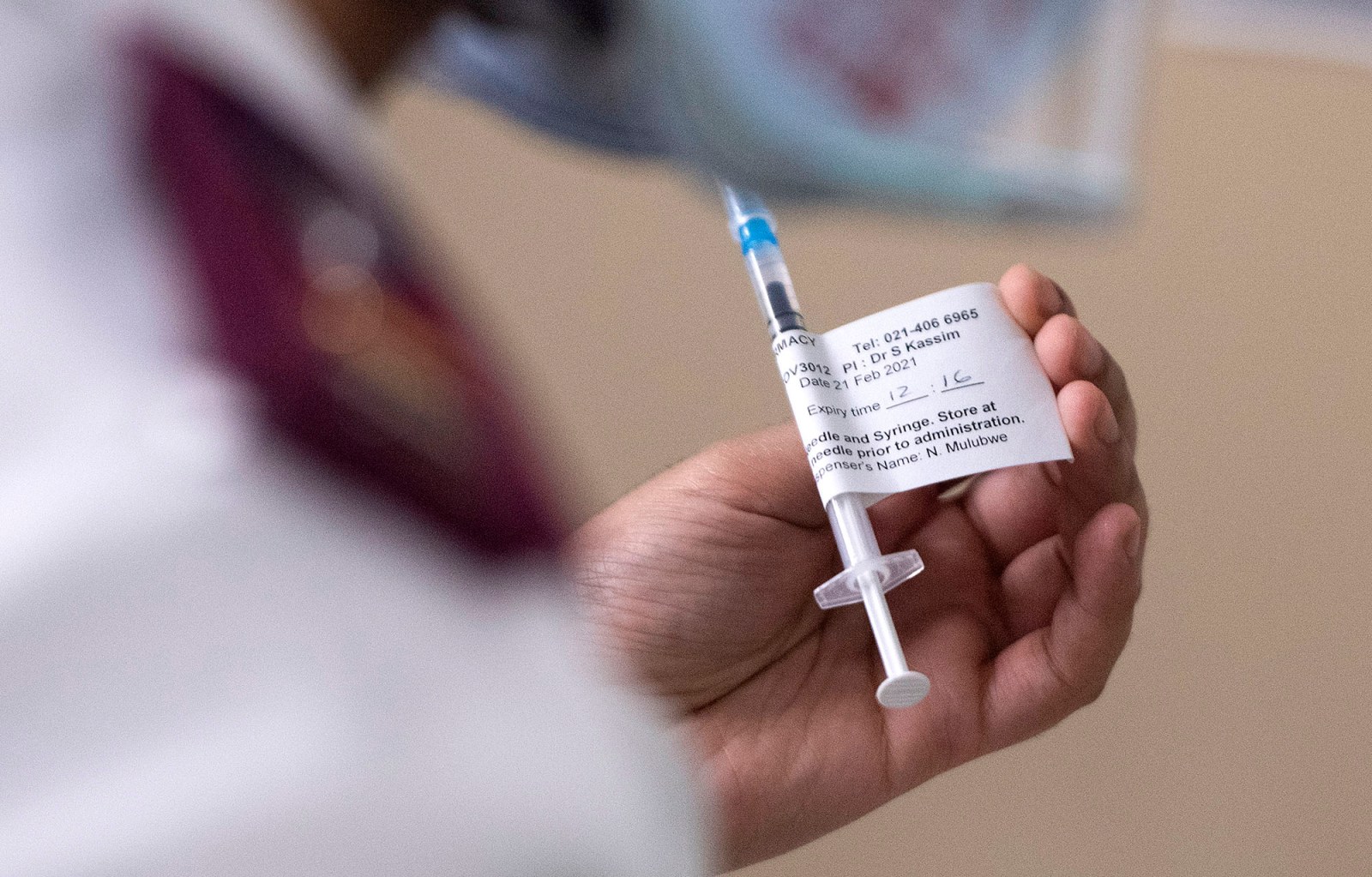 President Joe Biden’s administration took its biggest step yet towards declaring victory over the coronavirus pandemic – announcing that fully vaccinated Americans can ditch their masks in most settings, even indoors or in large groups. Masks are still required on buses, trains and other forms of public transportation, as well as airports.

To drive vaccinations, New York Mayor Bill de Blasio is offering vouchers for a Shake Shack burger or sandwich for residents who got their shots, while Six Flags Entertainment will give away 50,000 tickets to its Illinois theme parks to newly vaccinated residents in the state.

Ontario, Canada’s most populous province, is keeping a stay-home order in force into early June. CureVac and GlaxoSmithKline said early data from laboratory tests of their second-generation Covid-19 vaccine suggests good protection against some virus variants.

President Joe Biden’s administration took its biggest step yet towards declaring victory over the coronavirus pandemic – announcing that fully vaccinated Americans can ditch their masks in most settings, even indoors or in large groups.

The guidance shift on Thursday is a turning point in the fight against Covid-19 and comes as US caseloads fall and vaccinations rise. It signals a broad return to everyday life, and is also a bet that any surge in spread from relaxed guidelines won’t be enough to reverse progress in inoculations.

“Anyone who is fully vaccinated can participate in indoor or outdoor activities, large or small, without wearing a mask or physical distancing,” said CDC Director Rochelle Walensky.

“If you are fully vaccinated, you can start doing the things that you had stopped doing because of the pandemic. We have all longed for this moment when we can get back to some sense of normalcy.”

Masks are still required on buses, trains and other forms of public transportation, as well as airports, she said.

Maine will lift many virus restrictions, removing capacity limits on most outdoor and indoor events, Governor Janet Mills announced. Masks must still be worn indoors in public places. Physical distancing will be required where people eat and must remove their masks.

“This change aligns with the latest science and makes sense for Maine at this stage, with more people getting vaccinated,” the Democratic governor said in a statement.

US bill proposes billions for gyms

Democratic Senator Tammy Duckworth and Republican Senator Jerry Moran on Thursday introduced a bill that would authorise $30-billion in grants to struggling gyms and fitness facilities, according to an emailed statement.

“It’s critical we support the fitness industry to help bring back jobs and provide Americans with opportunities to improve their fitness during this public health crisis,” Duckworth said in statement.

Peru will receive 700,000 doses of the Pfizer Covid-19 vaccine this Thursday, the largest batch received to date by the Andean country, Health Minister Oscar Ugarte said on his Twitter account.

“We are satisfied because it is the first time that in a single day that amount of doses has arrived in our country,” Ugarte said.

The value of the tickets is $4-million, the company said.

Ontario Premier Doug Ford extended the province’s stay-at-home order until at least June 2, the Canadian Broadcasting Corporation reported. Restrictions on outdoor recreation will be lifted on that date.

“The situation is slowly trending in the right situation,” CBC quoted Ford as saying. “Make no mistake, we’re not out of the woods yet.” He said the goal is for Ontario to have “the most normal July and August as possible.”

Romania will lift a nightly curfew on May 15 and face masks in open spaces will no longer be mandatory, President Klaus Iohannis said on Thursday. Private events such as weddings will be allowed with limited capacity after June 1, provided that attendees are vaccinated.

New cases have declined and vaccinations have increased in Romania, putting the country on track to cover 75% of the population in another seven months, according to the Bloomberg Vaccine Tracker.

Teachers’ union to back reopening

The president of one of the largest US teachers’ unions planned to call for a full reopening of public schools by the fall. Randi Weingarten’s announcement for the American Federation of Teachers marks a shift by a prominent voice opposing a return to in-person, full-time instruction.

“Conditions have changed,” Weingarten said in prepared remarks for a speech on Thursday. “We can and we must reopen schools in the fall for in-person teaching, learning and support. And keep them open. Fully and safely five days a week.”

The Manila metro area and surrounding provinces will shift to the second-lowest level of curbs called “general community quarantine” until the end of May, presidential spokesperson Harry Roque said on Thursday. The easing for the region, which is the country’s economic engine, follows a worse-than-expected contraction in the last quarter.

New York City Mayor Bill de Blasio said people who get a vaccine will get a voucher for a burger or sandwich from Shake Shack. For those already vaccinated, people can get a free order of French fries after showing a vaccination card.

The mayor appealed to parents to get their kids vaccinated as the city opened up shots for ages 12 to 15 in a bid to “get kids off of Zoom”. The city will also reopen some of its festivals, including the Governors Ball.

The United Arab Emirates allowed the use of the Pfizer-BioNTech vaccine for ages 12 to 15, based on clinical studies and local evaluation, the state-run WAM news agency reported. With about 11.4 million shots administered, the UAE is set to cover 75% of its population in another two months if the pace holds up, according to the Bloomberg Vaccine Tracker.

The African Union’s health agency urged countries on the continent to increase testing for the coronavirus as more states report different variants of the disease.

Testing dropped 21% last week, John Nkengasong, director of the Africa Centres for Disease Control and Prevention, said in an online briefing on  Thursday.

Six African nations including South Africa, Angola, the Democratic Republic of Congo, Morocco, Uganda and Kenya have reported the B.1.617 strain that is devastating India and which initial studies show spreads more easily. That’s in addition to the 24 African nations that reported cases of the B.1.1.7 mutation found last year in the UK, with the same number of countries reporting the B.1.351 variant first identified in South Africa in 2020.

Vaccine hesitancy increased in the European Union after the suspension of AstraZeneca’s vaccine, with more than a third of adults in the bloc indicating they were unlikely to get immunised from Covid-19, according to a Eurofound online survey.

After several EU countries suspended use of Astra’s shot in mid-March, 34% of respondents in February and March said they were hesitant to take the vaccine. Before the pause, 25% said they were “rather unlikely” or “very unlikely” to get it.

CureVac and GlaxoSmithKline released positive early data from laboratory testing of their second-generation Covid-19 vaccine, with signs the shot could also provide good protection against some variants of the virus.

Preclinical studies showed strong immune responses in rats, with significant neutralisation of variants first discovered in the UK, South Africa and Denmark, CureVac said in a statement on Thursday. Human trials are expected to start in the third quarter.

US biotech billionaire Patrick Soon-Shiong will give an initial R3-billion to South Africa, the country of his birth, to help with the transfer of new technology for Covid-19 vaccines and other therapies.

The African continent accounts for only about 1.5% of globally administered shots, data from the Africa Centres for Disease Control and Prevention show.

The Serbian government’s pledge to pay 3,000 dinars ($31) to those receiving vaccines helped speed up inoculation to almost 24,000 people a day from around 8,000 before the offer was announced on May 5, President Aleksandar Vucic said on Thursday.

Among the first on the continent to launch mass vaccination in January with shots from China, Russia and Western drugmakers, Serbia faced a slowdown amid scepticism toward vaccines, even as it offered its citizens the choice of four different jabs.

Angola’s Ministry of Health approved the use of Russia’s single-dose Sputnik Light vaccine against the coronavirus, according to the Russian Direct Investment Fund.

The Sputnik Light is the first component of the Sputnik two-dose vaccine, which Angola approved in March, the fund said in a statement. Russia’s state-run wealth fund backed the vaccine’s development and is in charge of the inoculation’s international roll-out.

Seychelles, which has vaccinated a greater proportion of its population against Covid-19 than any other nation, said a surge in cases of the disease is easing.