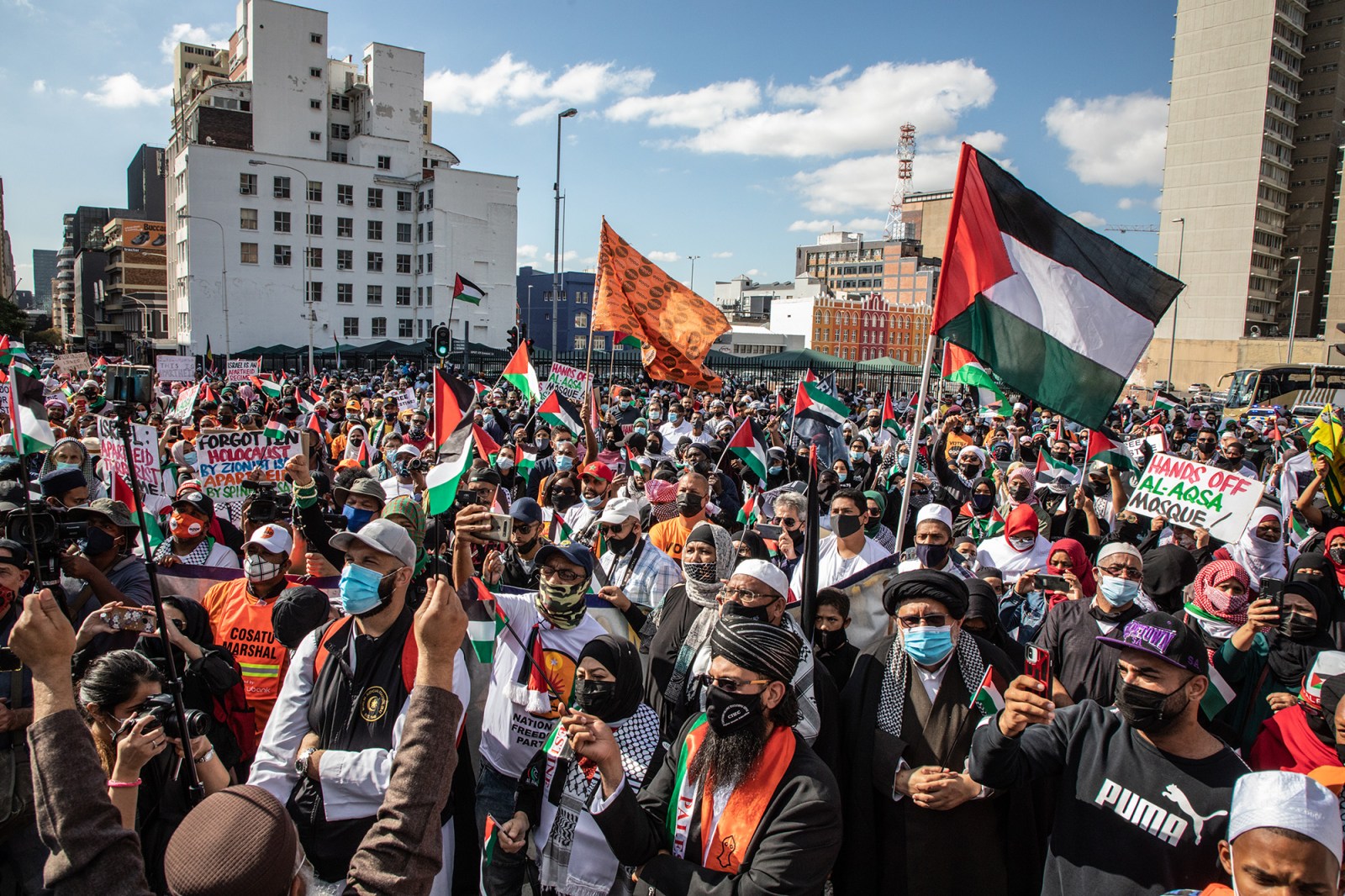 About 1,000 people marched to Parliament in Cape Town on Wednesday, 12 May 2021 protesting against the recent deadly Israeli air strikes in the Gaza Strip, that have escalated since Monday. (Photo: Victoria O’Regan)

The protest came after Israel’s air strikes on the Gaza Strip, which have killed at least 56 people since the violence escalated on Monday.

With Palestinian flags aloft and fists raised, about 1,000 protesters chanting “Allahu Akbar” (God is great) and “Free, free Palestine” marched through Cape Town’s city centre to Parliament on Wednesday morning, in a show of solidarity with Palestine.

Placards bobbed above the sea of faces: “Hands off Al-Aqsa Mosque!”, “End the occupation”, and “Free Gaza, free Palestine!”. Some protesters wore T-shirts with slogans: “South Africa will never be free until Palestine is free” and “Hands off Jerusalem”.

The protest came after Israel’s air strikes on the Gaza Strip, which have killed at least 56 people since the violence escalated on Monday.

The Israeli raids follow weeks of mounting tension over plans for the forced evictions of Palestinian families from Sheikh Jarrah, a Palestinian neighbourhood in East Jerusalem. The violence intensified when Israeli police stormed Al-Aqsa Mosque in Jerusalem on Monday — firing rubber bullets, tear gas and wounding hundreds of Palestinians.

Hamas militants in Gaza have fired hundreds of rockets into Israel.

On Wednesday, the Embassy of Israel in South Africa released a statement saying rockets were fired at Israeli citizens, injuring more than 200 people in 48 hours.

“We call on the international community to unequivocally condemn the Palestinians’ rocket fire and terrorist activities against Israeli civilians, to recognise Israel’s right to protect its citizens, and to work with the Palestinian Authority to immediately stop the incitement and violence,” read the statement.

Wednesday’s protest, organised by the Al-Quds Foundation and the Muslim Judicial Council (MJC), was the second pro-Palestinian protest in Cape Town within two days. On Tuesday, about 300 people marched to Parliament calling for the South African government to boycott, divest from and impose sanctions on Israel in the wake of the violence.

Representatives of South African political parties, including the ANC, the Good Party and the Economic Freedom Fighters (EFF), and organisations including the labour federation Cosatu also participated in Wednesday’s demonstration.

“We call for harsh and meaningful sanctions against the apartheid-like Israeli government,” said Herron.

ANC MP and grandson of former president Nelson Mandela, Mandla Mandela, called for crowds to convene in front of the Israeli embassy in Pretoria on Nelson Mandela International Day — 18 July — to demand the government “shut down and remove” the embassy from South Africa.

At the protest, Mandela also called for “the closure of the [South African] embassy in Tel Aviv”.

“It has been shocking, my brothers and sisters, to witness what has been happening in Sheikh Jarrah as well as in Al-Aqsa. We cannot be silent any more.

“It is through our actions that we can show the world that we stand by Palestine… we therefore want to give every Palestinian free access rights to South Africa,” said Mandela.

On Wednesday, the Desmond & Leah Tutu Legacy Foundation called on the United Nations and other global organisations to “directly intervene in the situation of injustice in Israel and Palestine and to ensure that the escalation into civil war proportions is halted now.

“The decades-long support for Israel’s apartheid regime must finally come to an end. The Israeli government must be made to abide by international law and to immediately cease illegal evictions, annexation and oppression against the Palestinian people,” read the foundation’s statement. DM