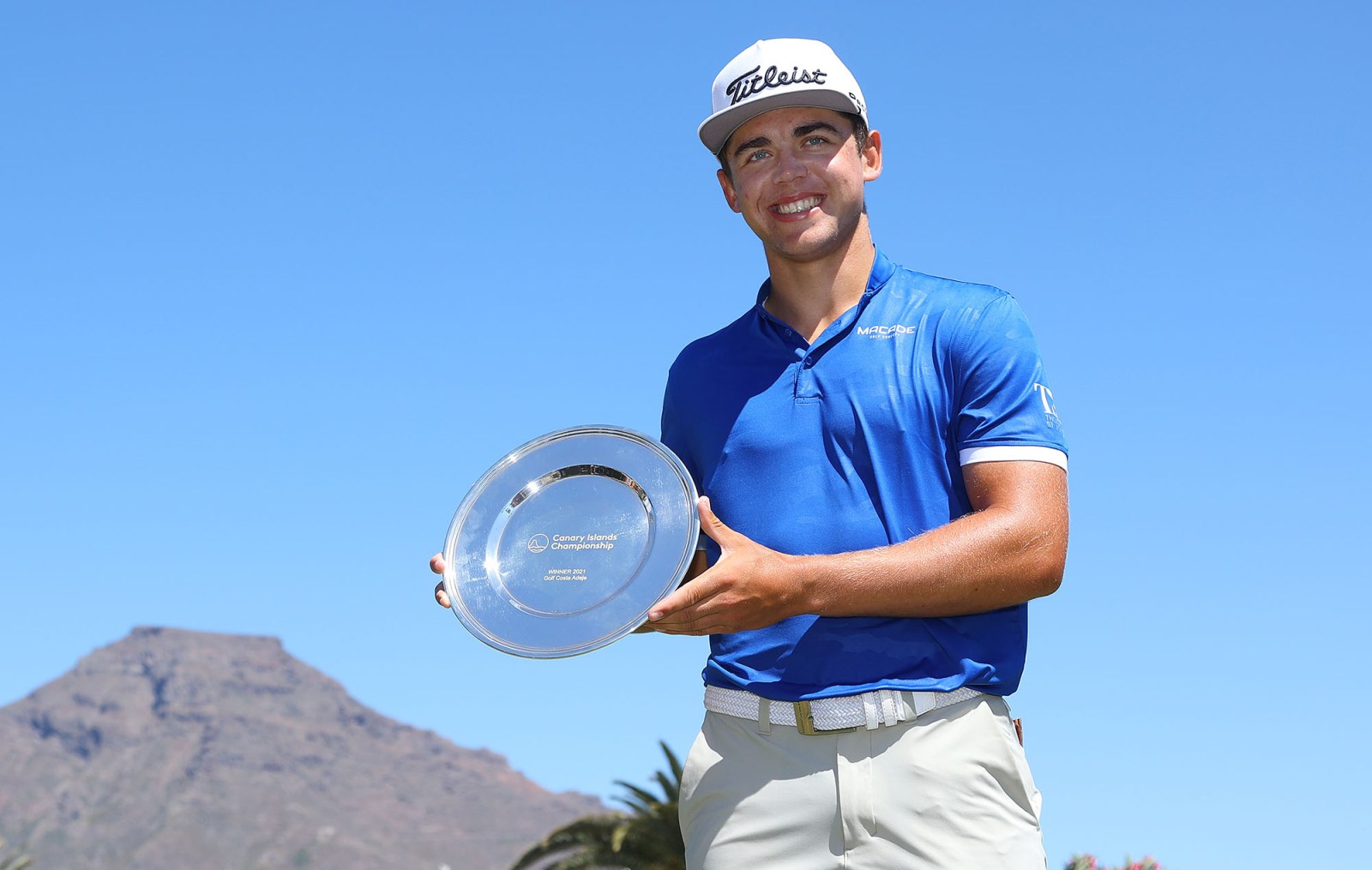 Garrick Higgo after winning the Canary Islands Championship at Golf Costa Adeje in Spain on 9 May 2021. (Photo by Andrew Redington/Getty Images)

A new generation of South African talent is starting to make an impression in the golfing world. Could South Africa be in for another ‘golden generation’ in the coming years?

When 43-year-old Ernie Els won his second Open Championship in 2012, it was a fourth major for South Africa’s elite men in five seasons. For such a small golfing country, relative to the US, Britain and emerging nations from Asia, that was a remarkable feat.

Trevor Immelman had won the 2008 Masters at the age of 28, Louis Oosthuizen was also 28 when he destroyed the field on his way to the 2010 Open Championship at St Andrews. And the following year, then 26-year-old Charl Schwartzel birdied the final four holes at Augusta to win the 2011 Masters.

Veteran Els added to his 1994 and 1997 US Opens and 2002 Open title with his fourth major in 2012 when he claimed the Claret Jug at Royal Lytham and St Annes after starting the final round six shots behind Adam Scott. Throw in Retief Goosen’s two US Opens in 2001 and 2004 and South Africa has punched well above its weight at the highest level.

But instead of kicking on and winning more majors, a serious wrist injury ended Immelman’s career as a golfing heavyweight almost as soon as he bagged the Masters. Schwartzel has battled a wrist injury, too, and Oosthuizen has constant back problems.

Oosthuizen has lost two playoffs for majors – the 2012 Masters and 2015 Open, and has also been a runner-up at the PGA Championship (2017) and US Open (2015). He continues to be a regular top-10 finisher on the US PGA Tour and has become one of the game’s most consistent performers, but not one of its winners. Schwartzel has also displayed a good return to form this season, but both are in their mid-30s now.

After a nine-year South African major drought, it’s unlikely the thirst will be quenched in 2021, but if we turn the clock forward a few years the names of Garrick Higgo and Wilco Nienaber are almost certainly going to feature at the top of major leaderboards.

Both are 21 and have the raw materials to become bona fide golfing superstars and pick up the mantle from Oosthuizen and Schwartzel.

Just 14 days after Higgo won at the Gran Canaria Lopesan Open with a European Tour record-low score of 255, a closing 64 with a hole-in-one moved him to 27-under and handed him a six-shot victory at the Canary Islands Championship.

Considering he has made just 26 starts on the European Tour, three wins (which includes 2020’s Portuguese Open) constitutes an amazing return.

To put that in perspective, Oosthuizen has been a member of the European Tour for 19 years, played 306 tournaments and won nine events.

Schwartzel has also been on the European Tour for 19 years since earning his card in 2002, has played 325 events and secured 11 wins. It underlines how hard it is to win and how special Higgo’s play has been in the past 12 months.

What made Higgo’s achievements more eye-catching was the way he dominated the field and scored. Across the 12 rounds of the Canary Islands Swing (which included the Tenerife Open), Higgo’s combined total was 68-under par as he sent records tumbling.

By winning three of his first 26 events on the European Tour, Higgo joins the great Tiger Woods for the fewest events needed to claim three European/PGA Tour wins since 1990. It’s heady company.

The left-handed Higgo will make his major debut at the PGA Championship at Kiawah Island in South Carolina next week, where his recent results and obvious talent will come under severe scrutiny.

It has been a remarkable run for South African golf recently, with Brandon Stone, JC Ritchie and Nienaber also making it three wins in a row for the Rainbow Nation on the European Challenge Tour.

Higgo moved up to fifth on the Race to Dubai Rankings and also moved to 51 on the Official World Golf Ranking for the first time.

The youngster was not short of confidence when discussing his future prospects as well.

“I’ve been working really hard, a lot of little things, and I’ve also accepted what works for me and stuck with that; I think that’s been a big thing, and not if I don’t play as well look for something,” Higgo said. “I’m just going to try and keep going.

“I think I can go as high as I want to, the way I’m playing I can do a lot of good things.”

In both tournaments he won in the Canary Islands, he led going into the final round. While that is a dream scenario, it also comes with pressure because it’s the leader’s title to lose.

A little pep talk from South Africa’s most successful golfer, Gary Player, helped Higgo before winning the Gran Canaria Lopesan Open (the first of his two over the recent swing).

“I spoke to Gary last night actually and he just said there is no such thing as a lead and you should play like you’re two behind,” Higgo said before shooting a final-round 63 at the par-70 Meloneras Golf layout.

Back in South Africa, Nienaber, who averages drives of close to 300m, showed that it’s not only about length but a tidy short game when it comes to winning tournaments.

Nienaber claimed the 2021 Dimension Data Pro-Am at Fancourt in George for his first Sunshine Tour win. The tournament also carried European Challenge Tour status and it has given him entry in bigger events later in 2021. Most importantly though, he has won, which brings an untold mental boost, especially for someone who was an amateur star.

Nienaber’s maiden professional win required a three-hole playoff victory over Swede Henric Sturehed after both finished on 19-under par after 72 holes.

Nienaber’s achievements are more modest than those of Higgo, but insiders in the game say that with his length, the young South African will prosper as he gains experience.

Golf courses tend to favour longer hitters as organisers use length against today’s power hitters. As long as Nienaber keeps hitting the ball accurately as well as long, he will become a very dangerous contender in bigger events.

“I’m so excited and quite emotional. It’s a lot of hard work that I put in to get this win,” said a tearful Nienaber after this victory. He struggled to get through his victory speech as he tried to explain the emotion of not being able to have his family at the golf course to celebrate with him.

“I’m a very family-oriented guy. We have a very close bond in our family. A lot of this is thanks to them that I was able to win today. It’s crazy how much they have supported me,” he said. DM