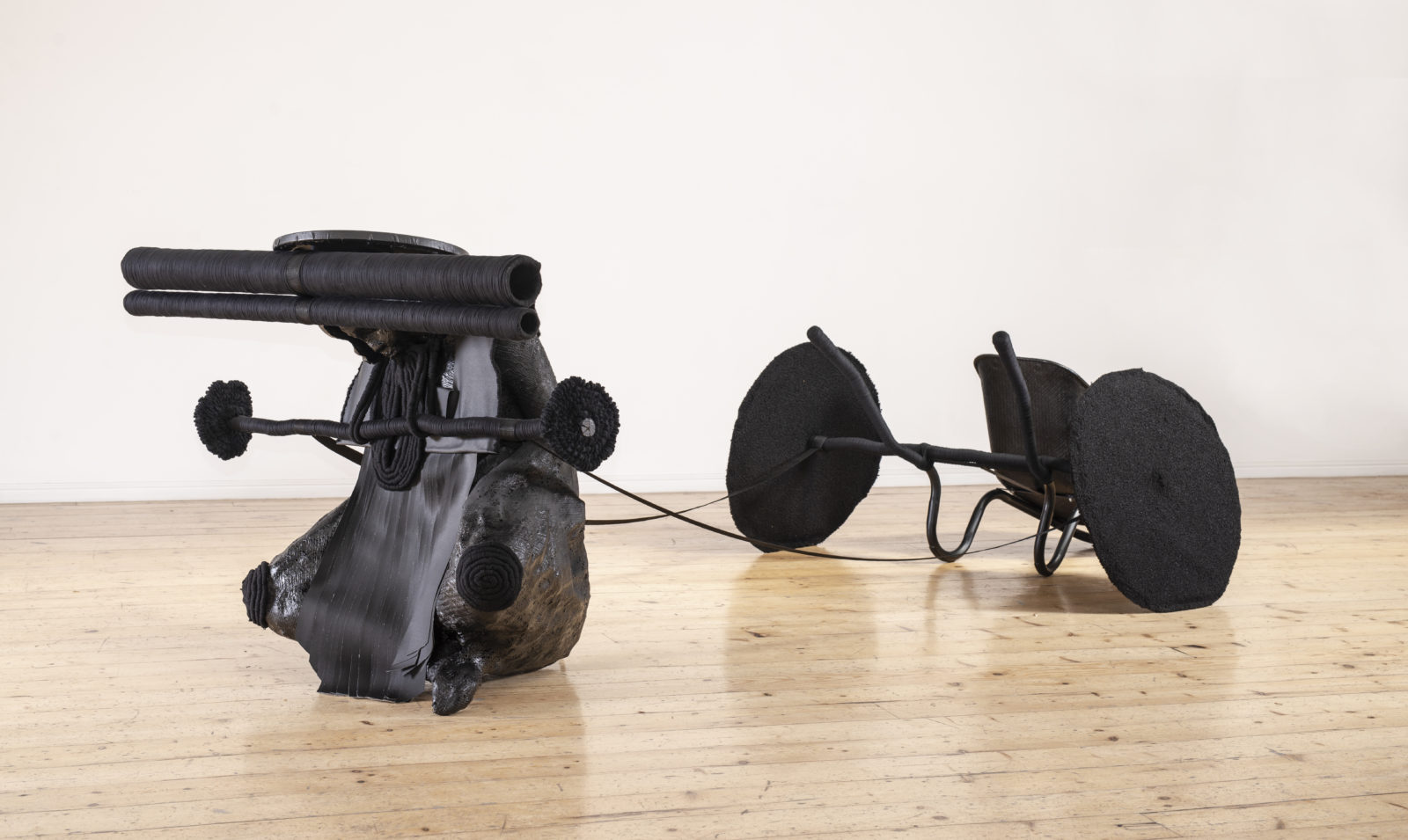 Curator Gcotyelwa Mashiqa digs into ‘blackness’ and asks us to look beyond appearances, even of art itself.

It is not often that a curator implores you to listen to visual artworks. Yet strangely this is what Gcotyelwa Mashiqa asks of viewers at the Black Luminosity exhibition currently showing at Smac Gallery in Stellenbosch. This unconventional appeal, which fortunately doesn’t manifest in visitors having to wear an eye mask as well as a face mask, speaks to two concepts that interest this independent South African curator.

First, the visibility and invisibility of blackness and how one might feed the other, and second, the idea that artworks speak to us in ways that transcend vision. By the latter Mashiqa wishes to draw attention to the way that we view images with a set of expectations and a language that could be a barrier to what the artist might be communicating. Put more simply, in overthinking the visual appearance of an artwork and deducing what it might mean, we often overlook how they make us feel and the ephemeral states they evoke.

For this reason Mashiqa selected artworks for the exhibition that didn’t directly appear to engage with being black or blackness – terms that manifest in this show in multiple ways that stretch beyond racial identity.

In the context of Mashiqa’s drive to “listen” to art – the title, Black Luminosity, refers to an absence of seeing – but also the potential in not being able to “see”. This makes for an interesting exhibition, particularly given the mix of artists – who are at different stages in their careers – from Luyanda Zindela, a Durban-based artists who is garnering attention, to well-known international art stars such as Mary Sibande and Alexandra Karakashian and celebrated mid-career artists such as Usha Seejarim and Wallen Mapondera, who delivers a wonderfully cheeky work fashioned from toilet paper.

A trio of works dominated by black grab your attention as you step into the gallery. An almost life-size installation/sculpture, boleta le bofefo (2019-2020) by Cow Mash is characteristically fashioned from a mix of different black materials. The Bloom (2021) series of abstract paintings by Karakashian are all rendered in black oil – also a signature of this artist’s work. There are no aural works on the show – Mashiqa isn’t directing viewers to literally listen to art but to perceive it via other senses and modes.

“There are other ways we can engage with artworks. We shouldn’t just look at them. As Mieka Bal (the Dutch artist and academic) says, ‘sight is impure’. We have these biases and we are conditioned to see in a certain way. I wanted people to see differently to relearn how they look at artworks. Listening is about refusing to use the terms that were given to us and told to use while looking at images,” says Mashiqa.

Of course, this approach isn’t only designed to upturn how we might look at art, or at least become more conscious of how our looking is socially conditioned but also pertains to racism, which is grounded in an inherent bias based on appearances.

It is not surprising therefore to learn that the concepts for Black Luminosity were brewing during the first round of lockdown when the death of George Floyd gave rise not only to protests around the world but as a result heightened an awareness of racism and prompted efforts to combat it. Black people were gracing covers of magazines and a form of visibility of black identities appeared pronounced. This response naturally coincided with renewed interest in portraits of black people produced by black artists.

Indeed one of the artists with a work in Black Luminosity, Zandile Tshabalala, has noticeably been riding this renewed black portraiture wave with her slick paintings depicting a bald black woman who resembles the artist. Tshabalala reconfigures notions of feminine beauty through these glossy self-portraits often picturing the subject in idyllic tropical settings.

Self Check: Lady in pink scarf (2021) celebrates blackness – the subject’s skin is pitch-black and her red lips and painted nails pop against this dark shade. This form of celebratory portraiture has been finding traction not only on Instagram but auctions, yet it is the only artwork in this vein in Black Luminosity.

Mashiqa is interested not only in a spectrum of expression and how this may reflect different readings of blackness – as not only about race, but sight and seeing, feeling – but also in encouraging viewers to look (and listen) beyond appearances she needed to present artworks that weren’t simply about physical presentations of the self. Not that this curator strategically planned each piece with a specific intention in mind.

“It is only now in retrospect that I am reading the works on the show. That is what I always enjoy about making exhibitions; I am not engaging with the work visually, I work more intuitively. I wanted to expose myself and discover my own biases as a curator. As a black woman, during Black Lives Matter, I wanted to ask myself: What forms of anti-blackness have I internalised?” observes Mashiqa.

This young curator first found her feet in this precarious profession at the Zeitz Museum of Contemporary Art Africa in Cape Town, where she was appointed as one of the first curating interns. She became a curatorial assistant and gained attention, but found her time there (as many did), under the directorship of Mark Coetzee, not to be very nurturing for a young curator, so she left prior to Koyo Kouoh’s tenure.

“It didn’t fit into who I wanted to become.”

Though there are now a number of new private art foundations in South Africa – the Javett Art Centre, Norval Foundation and the Joburg Contemporary art Foundation – this hasn’t necessarily translated into more opportunities for independent curators, says Mashiqa.

It was the inaugural Stellenbosch Triennale that provided her with a platform after she left Zeitz MOCAA in 2019 – she co-curated the From the Vault exhibition, which is still showing at the university gallery in that town. She has also worked with the renowned Nigerian curator Azu Nwagbogu and has a project coming up with him in Nigeria later in 2021. However, it is a struggle finding opportunities in South Africa as an independent curator. Black Luminosity came about when Smac asked her to compile a proposal for a high-profile art fair. It isn’t easy curating shows in commercial spaces, for the simple fact that commercial ends are not her goal, says Mashiqa.

“The work I do is so museum-like. The pieces I chose for this exhibition by Usha Seejarim and Cow Mash might not be able to sell. I have no motive other than to explore my academic work. More galleries should explore inviting curators; people would probably not miss those exhibitions.”

Her interest in looking, visibility and perceiving conditions and expression beyond the naked eye can be attributed to Mashiqa’s early training as a photographer – but also an interest that underpins a master’s thesis which is focused on analysing a photographic archive of ethnographic imagery. This led her to the writings of Georges Didi-Huberman, a French philosopher who presents some controversial perspectives on the way we read images.

Black Luminosity was inspired by his essays.

“Huberman writes that people are exhibited to disappear. I found that a provocative statement – particularly reading this in the lockdown when we are all online and we see everything. The article was written five years ago and addresses how hypervisibility produces invisibility. So what we see every day we stop seeing,” observes Mashiqa.

Can we look at Mary Sibande’s work in a fresh manner – given this South African artist’s oeuvre is so familiar to us? Mashiqa was willing to take up this challenge, including two works by this famous artist.

A photographic work by Sibande titled Turn, turn, turn, turn (2019) juxtaposes two female figures, which  seem to represent a deity and a follower. The artwork brings into focus spiritualism and religious worship, an aspect that perhaps has been present but overlooked in Sibande’s art since her well-known Sophie series – depicting a subject in a Victorian-ised domestic worker’s outfit.

Mashiqa wanted to not only draw attention to the relationship between spiritualism and blackness but also a metaphysical condition – that escapes logic, visualisation. In other words she is drawn to artworks that evoke states beyond the visual – that compel what she terms “listening”.

Works by Usha Seejarim were intended to provide an unexpected turn in this exhibition, says Mashiqa.

“Usha’s works appear so masculine yet they refer to domestic objects.”

Slanted Representation and Art History at Home are sculptures made from reclaimed frames. In the latter work Seejarim uses the frames to create a giant peg. In using the frame for images rather than presenting an image Seejarim sidesteps visual representation itself and digs into the collective history of imagery, transposing it into the domestic realm where women have and continue to toil – and are forced to create their own visual history, expression, using what is at hand. In this way she evokes the difficulty in articulating and accessing a history of marginalised people who have had no suitable or recognised “frame” for their labour and expression. In this context “listening” to art might entail sensing an absence – imagining the stories that haven’t been told, have had no place to be seen. DM/ML

The African Art Features Agency is funded by the National Arts Council of South Africa.
Black Luminosity is showing at Smac Gallery in Stellenbosch until 20 May.