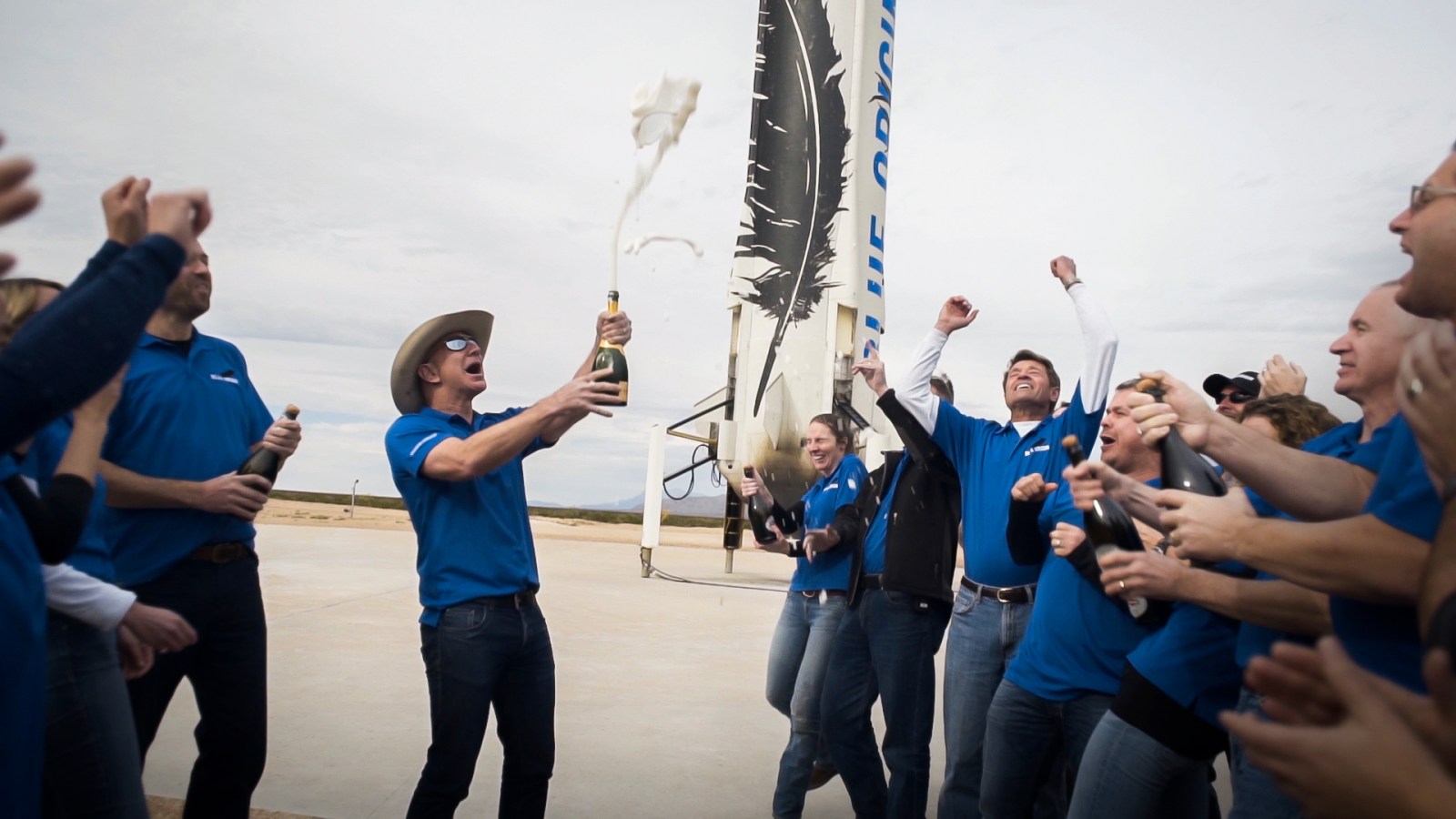 We go back to the beginning of SpaceX, Blue Origin, and another famous billionaire space entrepreneur and explore their motivation, and the potential rewards that could make some of the richest men on Earth, much, much richer.

“You don’t choose your passions, your passions choose you.” So begins Jeff Bezos, then the world’s richest man. It is Thursday, 9 May 2019 and he is on stage in front of a dimly lit audience, somewhat reminiscent of Apple’s famous keynote events. He will present his long-term vision not only for the future of some of his business interests, but for all of humanity, spanning hundreds of years into the future, and defining millennia after that. It is a dream he has held on to for decades longer than the past two spent building Blue Origin, the aerospace manufacturer and suborbital spaceflight company he founded in 2000.

On two large screens to the left and right above him he shares a news clipping from the early 1980s, when he was in high school. The top-of-his-class, overachieving teenage Bezos is quoted as saying: “The Earth is finite, and if the world economy and population is to keep expanding, space is the only way to go.” The reporter writes: “As a ‘space entrepreneur’, [Bezos] would ‘construct solar power satellites that would make the world peaceful and affluent through abundant cheap energy.”

Almost four decades later, the vision Bezos presents on this day looks like something out of a science fiction movie. He draws on the work of American physicist Gerard K O’Neill, particularly his 1976 book, The High Frontier: Human Colonies in Space, in which he proposed colonisation of space using materials extracted from the moon and asteroids. Instead of trying to find another planet to live on, O’Neill’s colonists would live on space islands, built as rotating cylinders floating in space.

But before Bezos shares his plan to build a “road to space” that will make the construction of “O’Neill colonies” possible for future generations, he makes it clear that he believes Earth is the best possible planet in our solar system for humans because “other planetary surfaces aren’t that big… they’re a long way away, [a] round trip to Mars [would take] years, and launch opportunities to Mars are only every 22 months… you’re far enough away that you’re not gonna be able to do real-time communication with Earth, you’re gonna be limited by speed of light lag… don’t even think about playing Fortnite with somebody on Earth… Most fundamentally, these other planetary surfaces do not have and cannot have Earth normal gravity.” He tells the crowd that at our rate of development, our ever-increasing demand for energy consumption puts future generations on this planet at risk.

“These are very large structures, miles on end, and they hold a million people or more each.” The digitally rendered images he presents of the world inside the colonies is populated by familiar terrestrial scenes: Green hills, mountains, farms, high-speed trains, skyscrapers, dams and suspicious-looking drones. “These are really pleasant places to live. Some of these colonies might choose to replicate Earth cities… these are ideal climates… no rains, no storms, no earthquakes,” he regales his audience, promising them that they can be close to Earth, “so that you can return”. The “road to space”, he says, will make it possible for these future Earthlings to travel between Earth and the space colonies in a matter of hours.

A few minutes later, he will present the two Blue Origin vehicles that he believes will get humanity closer to his dream. First, the New Shepard, a reusable suborbital rocket system that can take astronauts as well as research payloads. In addition, it is expected to eventually take tourists to space, increasingly putting another billionaire with dreams of space exploration under pressure, namely Virgin Group founder Richard Branson.

Up until March 2016 – when Blue Origin invited journalists to its headquarters and manufacturing facilities for the first time, where Bezos spent three hours with them sharing this very vision – the company’s activities had been shrouded in relative secrecy, with information coming occasionally in dribs and drabs and when absolutely necessary. On the other hand, his fellow American billionaire space entrepreneurs, Branson and Elon Musk, were not nearly as discreet.

In 2005, a year after launching spaceflight company Virgin Galactic, Branson’s Virgin Group co-founded The Spaceship Company alongside spacecraft-manufacturing company Scaled Composites, the latter would own 30% of the new venture, and the Virgin Group 70%. By 2006, Branson told CNN: “Two years from now we’ll be starting to take ordinary people into space.”

The following year, on 26 July 2007, Branson’s galactic ambitions would hit the first of numerous major glitches, when three Scaled Composites employees were killed and another three injured in an explosion while testing the rocket motor on the rocket test pad for SpaceShipTwo, the very spacecraft Branson hoped would launch space tourism.

However, a year and two days later, on 28 July 2008, at the Mojave Air and Space Port in California, Virgin Galactic unveils WhiteKnightTwo, the mothership that will one day take the passenger spacecraft, SpaceShipTwo, 15km above Earth before releasing it so the latter can fire its rocket and head about 100km into space. WhiteKnightTwo is dubbed Virgin Mother Ship Eve (VMS Eve), after Branson’s mother, Eve Branson.

The Associated Press reports that more than 250 people had paid $200,000 each to be among the first space tourists aboard Branson’s ship. He predicts to the BBC that “the maiden space voyage will take place in 18 months”, which would be around the end of 2009 or beginning of 2010. Indeed, Branson rolls out SpaceShipTwo at Mojave in December 2009, and names it VSS Enterprise, after the USS Enterprise on TV show Star Trek. By March 2010, the VSS Enterprise took its first carry flight test aboard the VMS Eve. Over the following four years mechanical improvements and numerous tests would follow before taking the spacecraft into space. Additional investors came on board, adding hundreds of millions of dollars to the project. By September 2013, Virgin Galactic predicts that its commercial service will begin by 2014.

It seemed the company was on its way to achieving the spacefaring dream that had eluded it for a decade. And then tragedy strikes in October 2014 when the vehicle broke up during a rocket-powered test flight and crashed in the Mojave desert, seriously injuring the pilot and killing co-pilot Michael Alsbury. The BBC reports that “more than 800 people have already paid or put down deposits for a trip on SpaceShipTwo, at a cost of about $200,000 per person”.

Nine months later, an investigation by the National Transportation Safety Board would conclude that the “in-flight break-up of SpaceShipTwo was Scaled Composites’ failure to consider and protect against human error and the co-pilot’s premature unlocking of the spaceship’s feather system as a result of time pressure and vibration and loads that he had not recently experienced”.

The finding essentially clears Virgin Galactic; the show goes on, and by 2016 Branson rolls out the second SpaceShipTwo, named VSS Unity. In 2017, the Virgin Group announces a deal with Saudi Arabia’s Public Investment Fund in the form of a non-binding memorandum of understanding, for an investment of $1-billion in Virgin Galactic, Virgin Orbit and The Spaceship Company.

Continue reading in the next story in our series ‘Space Opera’, The Galactic Game: Enters Elon Musk.