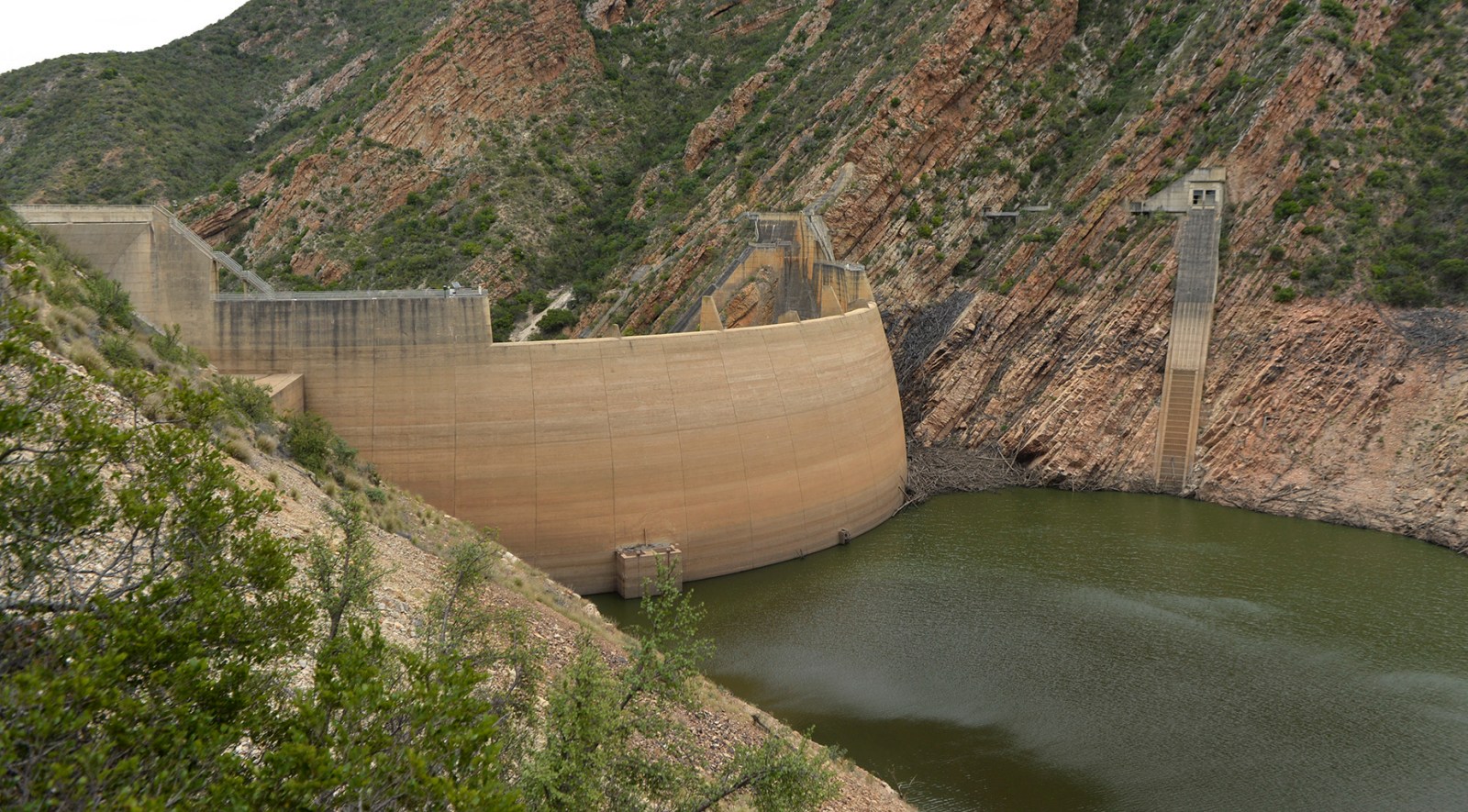 Officials use the concrete structure at the bottom of the Kouga Dam to measure how far dam levels have dropped.(Photo: Deon Ferreira)

The Eastern Cape’s biggest metro, Nelson Mandela Bay, has won a week’s grace after rain fell in the catchment areas of its two biggest dams — both of which are at dangerously low levels. It is estimated that parts of the metro will start running out of water by July unless the region gets more rain.

Despite good rain in Nelson Mandela Bay since Wednesday night, the combined levels of the metro’s dams still dropped by a combined 0.1%.

“After a wonderful week of rainfall, next week looks completely dry in our neck of the woods,” Garth Sampson from the SA Weather Service said.

He said dam levels had dropped by a combined 0.1%.

“The rise in dam levels is very disappointing, to say the least. However, considering that we have an average of a 0.46% drop per week, one can thus assume that there was in fact a real rise of 0.45%, but that has been used up already.

“Some hope is that there is still inflow into the dams, although minimal and the rate is decreasing by the hour. Although the inflow is disappointing, it did buy us another week [highlighted in yellow in the table], till we reach the critical 10%, where extraction from the dams becomes extremely difficult,” Sampson said.

He said the rainfall in May so far was below normal.

“Although only a third of the month has passed, the 42mm received thus far is well below the average of 58mm for May.”

According to the latest figures released for the Nelson Mandela Bay catchment area, the Kouga Dam is now at 4.25% and the second biggest dam, the Impofu Dam, is at 15.19%. As the Impofu Dam’s water levels have dropped below the intake pumps, a special barge must be used to extract water from the dam. Once the Kouga Dam reaches 3% it is expected that the Department of Water Affairs will stop water extraction.

Last week the metro’s executive mayor, Nqaba Bhanga, said water consumption had to be drastically reduced to prevent the dams from running dry. Since July 2020, the metro has fixed more than 31,000 water leaks, of which 5,526 were repaired this year.

Municipal water restrictions limit household water use to 15 kilolitres per household per month.

The municipality still expects water to run out at the beginning of July when the city is due to lose its biggest dam, Kouga, which has 1.5% of usable water left. That will reduce the available water to 248 million litres.

The metro indicated last week that 100 water tanks will be distributed to KwaNobuhle, a large township outside of Kariega (formerly Uitenhage) where reticulated water was first expected to dry up.

Each day, Nelson Mandela Bay receives 160-170 million litres of water from the Orange River, treated at Nooitgedacht — so the city is not facing an imminent Day Zero, but getting water into homes, businesses and industries will become more difficult. A pipeline will be built to connect KwaNobuhle to this water source.

Large parts of the metro have been without water since Thursday after an electrical fault at the Emerald Hill reservoir led to the reservoir running dry.

Metro spokesperson Mthubanzi Mniki said while they managed to get water to lower-lying areas, water tankers had been deployed to high-lying suburbs. DM/MC