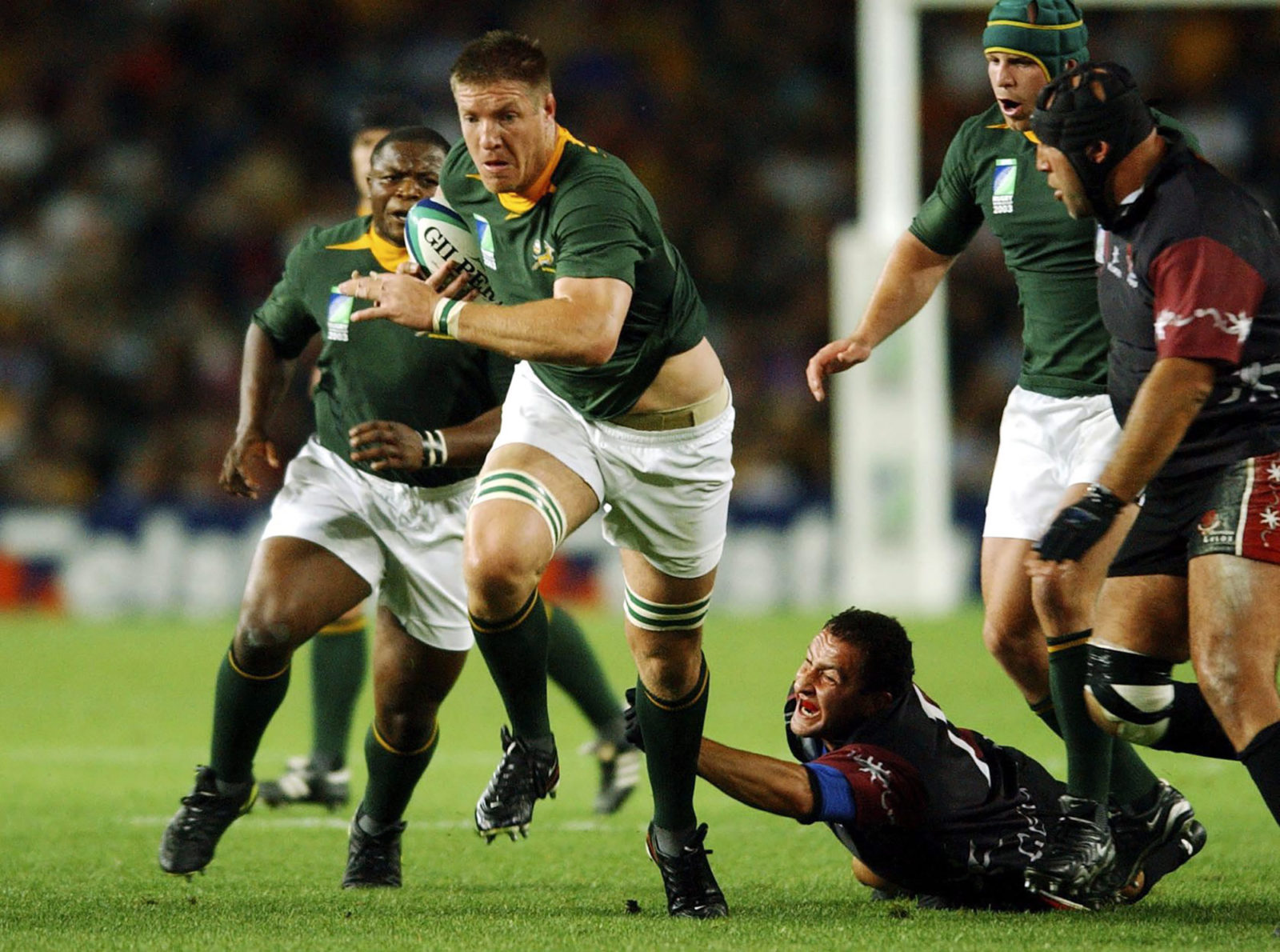 Georgia will have the honour of being the first team to clash against the 2019 world champion Springboks since that famous night in Yokohama 18 months ago.

There is sure to never be another British & Irish Lions series like the 2021 tour to South Africa, thanks to the hurdles Covid-19 has placed in front of it.

The fact that the Springboks will play their first match in 19 months just weeks before they face the British & Lions in the first Test, underlines what a fraught time it has been for rugby, sport in general and the world at large.

Springbok coach Jacques Nienaber, who was appointed in early 2020, faced the very real prospect of taking charge of his first Test as head coach against the 2021 Lions. It was a challenge he was willing to accept, but he’ll be more comfortable knowing that Georgia will offer an opportunity to dust away some of the cobwebs.

There will naturally be some question marks about whether Georgia are suitable opponents before such a crucial series, but in reality it’s the best SA Rugby could do in the circumstances. Georgia is the highest-ranked team that would tour South Africa.

According to well-placed sources, the All Blacks, the world’s second-ranked team behind the Boks, were asked to play against the world champions in Dubai. New Zealand Rugby took it under serious consideration, but due to New Zealand’s strict Covid-19 restrictions requiring a 14-day quarantine on return to the country, the All Blacks would not have been able to fulfil their commitment to play Fiji, which was already on the schedule.

England, Ireland, Scotland and Wales were naturally not available because they make up the Lions team. France and Australia are playing each other in July and ninth-ranked Argentina are touring Britain to take on a depleted Wales.

Tenth-ranked Japan were also approached by SA Rugby, but they meet the Lions in Edinburgh on 26 June and were not keen to return home via South Africa to play against the Boks because of Covid-19 restrictions.

Eleventh-ranked Fiji were already scheduled to meet the All Blacks, leaving 12th-ranked Georgia as the best available team that was willing to travel to South Africa during the pandemic.

Healthy relationship between SA and Georgia

There is a good relationship between South Africa and the East European country, which has translated into a prestigious series for Georgia and a vital one for the Springboks.

The series is also unprecedented for several reasons.

First, Georgia has never toured South Africa at senior level (they were supposed to have played the Boks in South Africa in July 2020 before the pandemic culled the tour) and second, the Boks have never played a home Test against another opponent while the Lions are in South Africa in the professional era.

That is the strange scenario that will unfold in July when the Boks meet Georgia on 2/3 and 9/10 July. SA Rugby has not confirmed the exact dates of the Tests due to avoiding a clash with the overlapping Lions tour and other Covid-19 considerations.

As of Monday, SA Rugby had not released the Lions’ tour itinerary, but they will be in the country at the time and will almost certainly have matches against provincial teams scheduled for those dates.

The Boks versus Georgia will almost certainly be played at the same venue as the Lions against one of their provincial opponents, to maintain the integrity of the bio-bubble. But it is unlikely that the matches will be on the same day.

One match will take place on a Friday and the other on a Saturday. The Boks and Georgia are likely to draw the Friday night straw.

Having the Lions and the Springboks playing in South Africa, just not against each other, is unusual to say the least. But the unusual and unexpected has become normal during the pandemic.

The Boks have only met Georgia once before, at Rugby World Cup 2003. On that occasion, a poor South African team (which was later eliminated at the quarterfinal stages of the tournament) beat Georgia 46-19 in Sydney.

The match was only memorable because it marked the first time that John Smit captained the Springboks. He would go on to lead them a further 82 times, including to victory in the 2009 series against the British & Irish Lions. For superstitious fans, perhaps there is a good omen in that.

“Nothing beats a full-blooded international to test your skill set, readiness and ability under pressure, and we are delighted to have this opportunity before the Lions series,” SA Rugby director of rugby, Rassie Erasmus said.

“Jacques (Nienaber), his coaching staff and management have been working around the clock to get the team as well prepared as possible, and the Georgia series is a much-needed opportunity after such a long and unforeseen interruption due to the Covid-19 pandemic.”

Nienaber, who never sees a glass as anything other than half full even if there is only a drop in it, was naturally overjoyed to finally have a Test to focus on. Preparation and planning are essential, but matches provide a focal point and a way to measure all that work.

With Lions coach Warren Gatland naming his squad last week, it feels as if South African rugby has taken a giant leap forward.

Throw in the positive return of 2019 World Player of the Year, Pieter-Steph du Toit, from a career-threatening injury and a return to form for players such as Bok skipper Siya Kolisi and wing Sbu Nkosi, and there is definitely a happier atmosphere around the sport.

“The confirmation of the Georgian Tests and the announcement of the British & Irish Lions squad last week have caused a lot of excitement and I am sure it will lift the spirit of the players — we can now accelerate our preparations for our return to Test rugby,” said Nienaber.

Despite the optimism and excitement, the threat of Covid-19 and its ability to derail sports fixtures still looms.

It appears that South Africa could be heading into a third wave, with an added twist. The B.1.617.2 variant of Covid-19, which was discovered in India, has hit local shores and as a consequence, there can be no complacency for SA Rugby and its planning around bio-secure hosting.

Although SA Rugby has been lobbying the government to allow spectators in stadiums for the Lions series, it is highly unlikely that authorities will budge now.

Sports Minister Nathi Mthethwa recently poured cold water on the possibility of fans in stadiums and other venues such as concert arenas and theatres.

“Both the creative events sector and sporting sector have come together… they’ve put together a plan. For instance, when it comes to rugby and the Irish & British tours, for instance, SA Rugby are proposing that we get at least 50% of the spectators back to stadia,” said Mthethwa.

“Well, that is being looked at, but it must answer the question: If you take FNB Stadium, which holds 90,000 people, and you allow 50% — which is 45,000 people — how are you going to ensure that that opening up is not a super-spreader? So, those questions have to be answered, like they were in the past.

“When it comes to football, for instance, they came with the concept of a bio-bubble and so on, and it was an attractive concept. It has been able to be implemented and it worked.

“Now, taking all of these things into cognisance, especially the fact we have these doctors saying that we are going to be facing a storm, the third wave, so what do we do?

“Do we say then that regardless of that, people must just flock to stadiums? And we will be able to pay when they die? No, we don’t have those resources as government.

“We are guided. No individual minister is going to come up with an answer on this matter. But the weekly meeting of the National Command Council, looking at this matter, will always guide the entire society, not one aspect of society.” DM