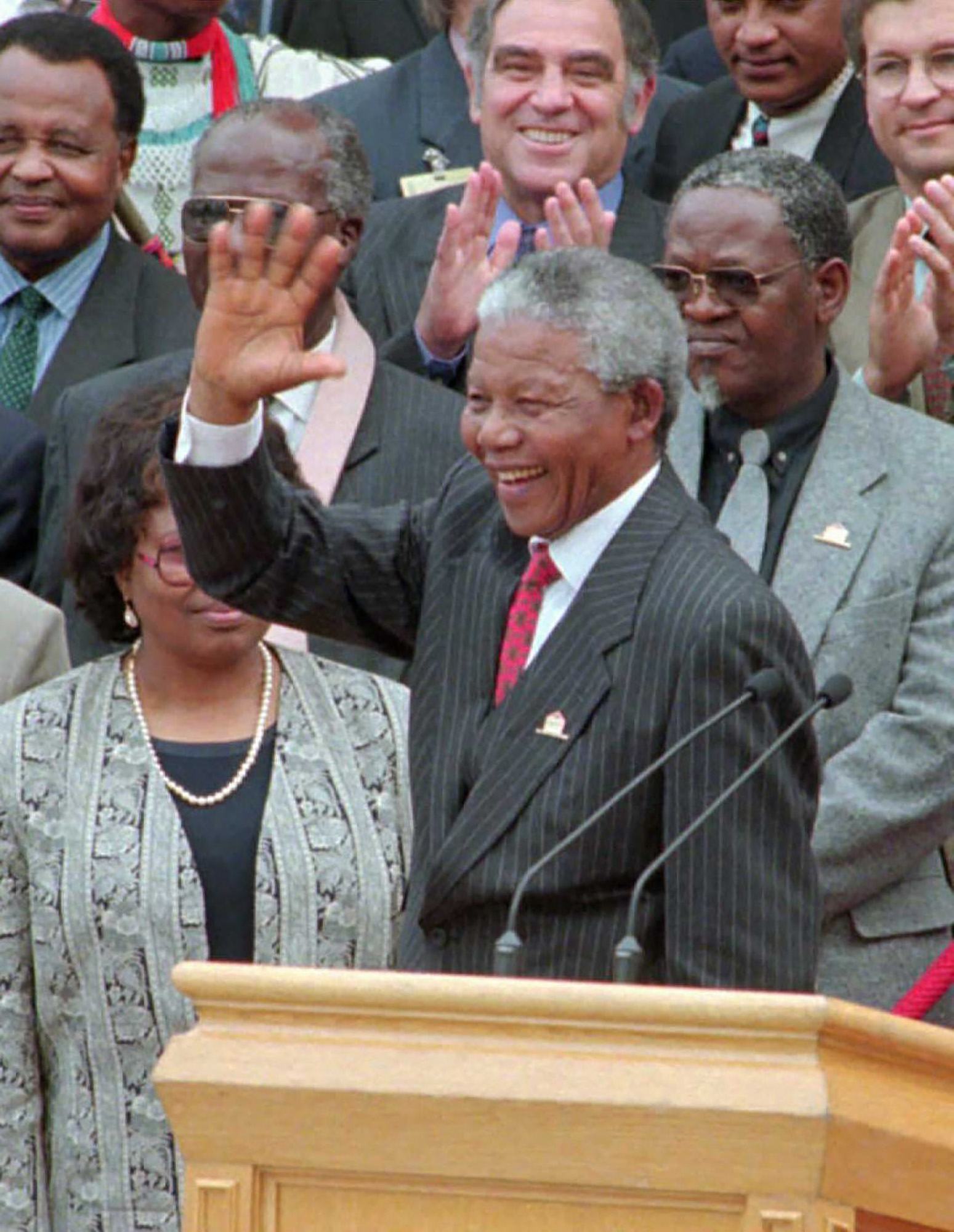 South African President Nelson Mandela (centre), surrounded by members of the constitutional assembly, waves to the crowd outside Parliament in Cape Town on 8 May 1996 after the official adoption of the country's new Constitution. The Constitution guarantees equal rights and majority rule, completing the transformation from apartheid to democracy. (Photo: AFP / POOL / Sasa KRAJL)

It was the new SA’s ‘birth certificate’. Have our leaders and civil servants honoured it?

Saturday, 8 May, marks 25 years since legislators adopted SA’s Constitution and Bill of Rights, for human rights and freedoms, dignity and equality in an accountable, open and responsive democratic state, as the founding values stipulate.

A denial of the political complexities of the time – by whataboutism or claims of a sell-out – amounts to little other than historical reductionism. This serves no one.

It wasn’t absolutely certain that adopting the Constitution would happen. In the two-day debate from 6 May 1996, there were tensions, last-minute jockeying for gains, and terse political barbs lobbed across the floor – and the really last-minute issues were ironed out as speakers debated.

“Breaking from the past means that we must break from a past in which there was arbitrary rule and replace that arbitrary rule with the rule of law,” said Dullah Omar, South Africa’s first democratic justice minister during that two-day debate, according to public records.

“What our people expect, is that we shall have a Constitution which will allow us to break from the past,” he said.

On the morning of Wednesday, 8 May 1996, the packed public gallery echoed the earlier public participation process in which 400 constitutional workshops were held countrywide and two million letters and petitions received by the Constitutional Assembly. But beneath the gallery were empty benches: the Inkatha Freedom Party (IFP) had walked out of the assembly in March 1995.

It took two tries, but the final vote was 421 for, from the ANC, National Party (NP), Democratic Party and Pan Africanist Congress – a minimum of 326 was needed – whereas the Freedom Front, as it was known then, abstained and the African Christian Democratic Party voted against.

Earlier, Constitutional Assembly chairperson Cyril Ramaphosa had described the Constitution as SA’s birth certificate. “It is indeed a historic day. It is the birthday of the South African rainbow nation. This is the day South Africa is truly born.”

In his “I am an African” speech, then deputy president Thabo Mbeki made the Constitution central to the outcome of SA’s struggles and aspirations. “The great masses … will not permit that the behaviour of the few results in the description of our country and people as barbaric. Patient because history is on their side, these masses do not despair because today the weather is bad. Nor do they turn triumphalist when, tomorrow, the sun shines… We are assembled here today to mark their victory in acquiring and exercising their right to formulate their own definition of what it means to be African.”

As speaker after speaker, from then deputy president FW de Klerk and Freedom Front leader General Constand Viljoen to DP leader Tony Leon, also described themselves as African, the final word was left to PAC leader Clarence Makwetu: “I have refrained from defining myself, seeing that each and every speaker before me has accepted the PAC definition of an African.”

After the vote adopting the Constitution, then president Nelson Mandela acknowledged how “the nation teetered on a knife’s edge, with reports of intractable deadlocks”, cautioning that amid the excitement of last-minute solutions, the magnitude and historic significance of the moment must not be forgotten.

“The adoption of this Constitution is the beginning of our efforts to resolve the problems of this country,” he said.

Mandela went off script. Anyone wanting to block this “mandate from the overwhelming majority of the people of this country to transform this country from an apartheid state to a non-racial state”, he said, according to the broadcast of the day’s proceedings on C-Span, would become a voice in the wilderness. It was a nod to the tensions of the time. On 9 May 1996, De Klerk’s NP decided to leave the Government of National Unity.

Across from Parliament’s main gates, Mandela unveiled a mural celebrating the Constitution. “It symbolises our pledge, to work together, united as a rainbow nation in our diversity, to build a better life for all our people,” he said then.

Twenty-five years later, that mural is long gone. And many cite the Constitution in the search for quick, easy answers for South Africa’s turmoil – joblessness at an all-time high, deepening poverty and hunger.

Fact is, the Constitution adopted 8 May 1996 didn’t fully pass muster at the Constitutional Court. On 6 September, it was returned, largely over the independence of the Auditor-General and Public Protector, and local government related matters. The Constitutional Assembly adopted amendments on 11 October 1996.

The Constitution has been amended 17 times, sometimes in fundamental shifts like making the Constitutional Court the apex court, and sometimes for political reasons – like floor crossing, so the New NP could leave its June 2000 alliance with the DA.

The current Constitution Eighteenth Amendment Bill, to expressly allow land expropriation without compensation, highlights how, when transformative governance is lacking, blunt political instruments are deployed. Many academics and lawyers are on record, as is the Parliament’s High-Level Panel on the Assessment of Key Legislation and the Acceleration of Fundamental Change, that a constitutional amendment was not needed for land reform – political will was needed. But governance has been fractured in the governing ANC’s Byzantine machinations.

Not the Constitution’s fault

What was aspired to has not materialised, but that can’t be blamed on the Constitution. It depends on people to give it life.

When the Constitution, in Chapter 10 on public administration, talks of “a high standard of professional ethics”, the “efficient, economic and effective use of resources” and that “people’s needs must be responded to”, it requires public officials to do that.

Yet the Auditor-General continues to identify scores of civil servants doing business with the state, years after that was banned. Financial management rules are broken. Reports continue of patients not receiving proper medical care, of police turning away survivors of crime, and pit latrines remain the only sanitation at many schools.

The Constitution, in Chapter 5 on the president and national executive, bars them from using their position to enrich themselves, but State Capture Commission testimony, the Gupta Leaks and, more recently, the Covid-19 personal protective equipment tender corruption, show persistent violation of those constitutional imperatives.

In some political circles, the courts are now accused of judicial overreach. But if elected public representatives did what they needed to do, in the spirit of the Constitution, court action would not be needed.

The Constitutional Court has done and is doing its bit. In the landmark Grootboom judgment in October 2000 on the right to shelter, the court ruled that the government, in line with available resources, had to ensure the progressive realisation of this right.

In July 2002, that was reinforced when health activists of the Treatment Action Campaign (TAC) successfully ensured nevirapine was made available everywhere to prevent mother-to-child HIV transmission during the Mbeki-era HIV/Aids denialism.

From land security rights and ensuring black women cannot be disadvantaged by traditional marriage and property regimes to declaring warrantless searches by the police an unconstitutional violation of the right to privacy, the human rights and equality jurisprudence is significant.

Lawmakers could have exercised their constitutional powers in these areas. Instead, the Constitutional Court, in March 2016, said Parliament had been “inconsistent” with the Constitution when, in contrast to the Public Protector’s ruling that then president Jacob Zuma had to repay a portion of the security upgrades at his Nkandla homestead, it absolved Zuma.

The Constitution in Chapter 4 gives Parliament wide-ranging powers to oversee and to hold accountable anyone in the executive, but party-political demands often trump constitutional responsibilities, as shown by the State Capture Commission’s hearings on parliamentary oversight .

Still, the Constitution’s quarter-century is a milestone. There are government plans to commemorate this. A starting point could be found in these words: “This Constitution is the supreme law of the Republic; law or conduct inconsistent with it is invalid, and the obligations imposed by it must be fulfilled.” DM168

Marianne Merten has been writing on Parliament for Daily Maverick since 2016.