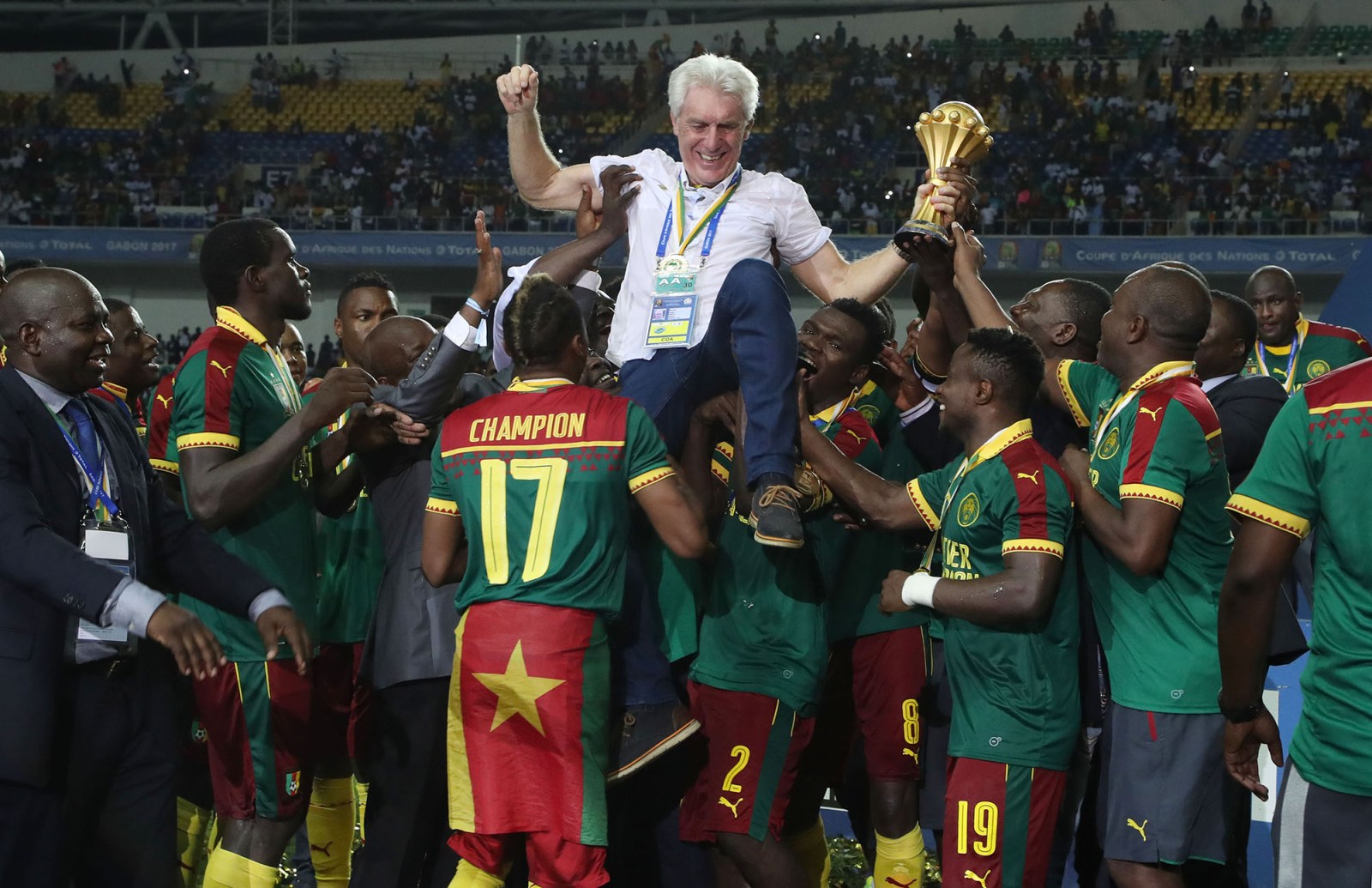 Hugo Broos, coach of Cameroon, hoisted by players in celebration after the 2017 Africa Cup of Nations final match between Egypt and Cameroon in Libreville, Gabon, on 5 February 2017. (Photo: EPA / GAVIN BARKER)

After weeks of speculation and postponements, Bafana Bafana finally have a new coach – Hugo Broos. Who is he and what will he be able to bring to South African football?

In his first interaction with South Africa’s public, new Bafana Bafana coach Hugo Broos, a former Belgium defender, identified South Africa’s leaky defence as one of the first things to work on when he lands in the country later this month.

The former Cameroon coach’s appointment was unveiled, midweek, by the South African football Association (Safa). He replaces Molefi Ntseki, who was fired in March after Bafana’s failure to qualify for the 2022 Africa Cup of Nations (Afcon) in Cameroon.

“There were some things that for me were a bit surprising. For example, in the games for Afcon I saw that it was very difficult for the team not to concede a goal. In every game, except against Sao Tome‚ they always conceded. In other games they conceded a goal in the beginning of the game,” said Broos, speaking during the virtual announcement.

“This is something we have to work on. But there are many other things. I will try to be there next week‚ and have meetings on what we have to do in the next month.”

Ntseki’s successor is also known to favour working with young players. Which is one of the reasons Safa deemed him to be deserving of the job. With South Africa’s under-23 side having qualified for the 2020 Tokyo Olympics, Broos has a foundation to build on. “With the information I have received and analysis I made in the last few weeks, I think it’s the moment to build a new team in South Africa‚” Broos said.

“I was a little bit surprised when I saw in the selections of the last games that there were a number of players who were 30 or more. So, I think we have to rebuild the team. Why a younger team? If you take the example of Cameroon … I did the same there. When you work with young players, they are motivated and hungry to show something,” the 69-year-old added.

“So, after South Africa did not qualify for the Afcon, this is the moment to start to rebuild a younger team – which may have some difficulties to qualify for the next World Cup – but will be ready maybe to play an important role one year later in Afcon.”

Bafana Bafana goalkeeper Ronwen Williams, who was part of the Bafana side that failed in their attempt to secure a spot in Cameroon, says it is important that Broos be given a chance to show what he can do.

“He has won the Afcon [with Cameroon] before so he knows what it takes to win, so hopefully his winning habits can rub off on us along with his experience of winning with Cameroon. He knows what we are lacking… So, hopefully he can help us bring our A game all the time and not just perform in patches,” Williams told KickOff.

Broos doesn’t have as close a relationship with the players as a local would, so players will have to sweat for their place in the squad. Which will surely improve their overall performances and amplify their hunger.

Who is Hugo Broos?

The 69-year-old played as a defender for two of Belgium’s biggest clubs, RSC Anderlecht and Club Brugge. He made more than 500 appearances during those spells. He also earned 24 caps for the national team in a playing career that spanned almost two decades.

He then hung up his boots in 1988 for a place in the dugout.

He has coached Brugge, Anderlecht, KRC Genk and Zulte Waregem in Belgium.

His spell with Brugge is his most successful as a coach to date. During his six-year stint, he won the Belgian league twice, in 1992 and 1996. He was also twice victorious in the Belgian Cup, as well as winning the Belgian Supercup on four occasions.

Outside of Belgium he has coached Trabzonspor in Turkey, Panserraikos in Greece, and JS Kabylie and NA Hussein Dey in Algeria. He led Cameroon to Afcon in 2017, where they beat Egypt to claim the fifth African title in their history.

This CV is what has convinced the association that Broos can be the man to finally arrest Bafana’s rotten run in international football.

The Belgian faces the unenviable task of trying to lead South Africa to their first Fifa World Cup qualification since 2002. They missed out in 2006, 2014 and 2018. In 2010 they made the cut by virtue of being the hosts.

Of course, Broos lost his job in Cameroon 10 months after the Afcon triumph. This after the nation’s failure to qualify for the 2018 World Cup in Russia.

The Indomitable Lions finished third in their qualifying group for the global showpiece, six points behind eventual qualifiers Nigeria. He will be hoping for a bit more success in that aspect in this new job.

It won’t be easy, though. Bafana are in a group with 2010 World Cup finalists Ghana and Zimbabwe – who, unlike Bafana, will be heading to Cameroon next year. Ethiopia completes the group.

A number of names have been linked to the Bafana coach job since Ntseki’s dismissal.

These included the man who was at the helm when the national team last qualified for a World Cup, Carlos Queiroz.

The Portuguese reportedly rejected advances from Safa, as did another candidate who was earmarked by the association’s technical committee – former Zambian coach Hervé Renard. The reality was that Safa could not afford either.

Bafana’s all-time leading goal scorer, Benni McCarthy, was then reported to be the leading candidate.

But DM168 understands Safa were not willing to meet some of his personal demands, which reportedly included him bringing along the members of his technical team who have been so instrumental to his success since he took over the reins at AmaZulu in December 2020.

There was also the small matter of McCarthy’s contract, and Safa having to compensate AmaZulu had they managed to prize him away from Usuthu. The 43-year-old signed a two-and-a-half-year deal upon his arrival.

Every day a different name

Asked about these candidates during the presentation of the new coach, Jordaan poured cold water on the matter.

“We don’t know of such negotiations. This is the first time that we have announced the coach. And it’s gone through the process. It only happened today. So, there’s no other negotiations,” stated Jordaan.

“The other names, of course every day there was a different name, didn’t come from the national executive committee of Safa.”

Broos is currently still in Belgium and is likely to land in South Africa next week.

In a crucial development, the Belgian will now also have a bit more time to assess the players after the Confederation of African Football announced on Thursday that they had taken the decision to shift the World Cup qualifiers, which were set for June, to September.

This decision is a result of some of the travelling challenges posed by the Covid-19 pandemic. DM168