‘We have to get our house in order,’ admits labour... 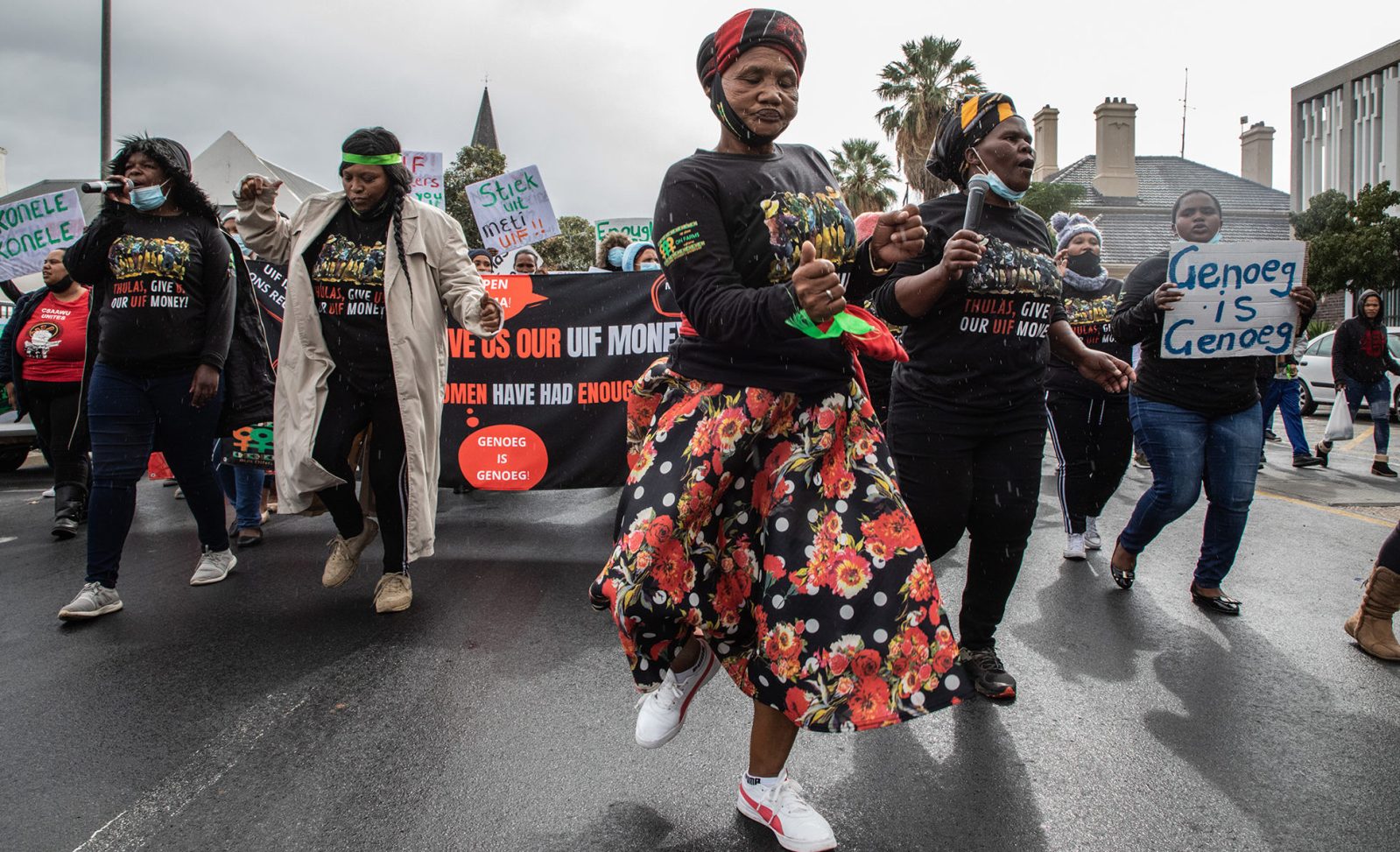 Women on Farms members march to the Worcester labour centre to hand over a memorandum, after concerns were raised over access to the Unemployment Insurance Fund (UIF) at an Indaba, in Worcester on Thursday 6 May 2021. (Photo: Victoria O’Regan)

Funding disbursement from the Unemployment Insurance Fund has become a problem for struggling seasonal farmworkers, says the Women on Farms Project – which has appealed for direct intervention from Employment and Labour Minister Thulas Nxesi.

Text by Suné Payne and photos by Victoria O’Regan

“I don’t know if I’m going to get it,” said seasonal worker Dina Ndleleni, who has been without work for more than a year. She was referring to the compensation due to her from the Unemployment Insurance Fund (UIF).

On Thursday, 6 May, Ndleleni joined about 150 women from the Women on Farms (WoF) Project on a march to the Worcester Labour Centre to call for better services in payment from the UIF.

Ndleleni told Daily Maverick she works on a grape farm in De Doorns. On 8 April 2020 her work was cut when the farm owner let seasonal workers go. “They just dropped us on 8 April last year – they said there’s no more work because of Covid-19… We were suffering.”

She did not receive support, such as food parcels, to help her through lockdown, and after struggling to access her UIF money she sought help from WoF. After a third attempt in July to access the funds, Ndleleni succeeded – but received only R1,800. “They said I don’t have any more money.” To make things worse, getting that small amount came at a price: She had to borrow money from her sister, who relies on a disability grant, to travel about 30km from De Doorns to the labour centre in Worcester.

De Doorns is a large farming community along the N1 in the Western Cape. In 2013, it was the site of major labour unrest, from which emerged a list of 21 demands including maternity benefits for women, a moratorium on farm evictions and tenure of security. The protest spread along the Cape’s farming heartland into Wolseley and Ceres.

But while some of those problems persist, in 2021 residents are focused on the Covid-19 lockdown and support mechanisms such as the UIF and Temporary Employer/Employee Relief Scheme (TERS). According to the Department of Employment and Labour’s statistics, Covid-19 TERS payments have been made to 169,500 employers and 1,657,836 employees in the Western Cape – a total of R7,191,302,721.35c in benefits.

But Ndleleni is not alone in her struggle with UIF access. During the WoF indaba in the Pietman Hugo Hall in Worcester on Thursday, women raised the same problems: Mobile labour offices weren’t functional, they travelled long distances to get to labour centres, and were sent back and forth between centres without the correct information for forms to be processed.

After the indaba, the group of about 150 marched in the rain to the labour centre in town to hand over their memorandum.

“Hundreds of seasonal workers from various areas, including De Doorns, Wolseley, Ceres, Touws River and Rawsonville, never received their UIF benefits despite making many trips to the labour centre at great cost. For example, workers from De Doorns pay R60 for transport to get to the local satellite office from surrounding farms, only to be turned away after queuing outside from 4 am,” said the WoF memorandum, which Daily Maverick has seen.

The problems seasonal workers face, as outlined by WoF, include: Officials losing or misplacing farmworkers’ documents, computer systems being offline resulting in workers not being able to get help, and women leaving labour centres without being helped despite queuing for hours. “The satellite office in De Doorns is not fit for purpose: For example, no landlines, insufficient staff, staff lack commitment and interest to assist seasonal farmworkers,” said the memorandum.

There were already about 50 people outside the labour centre, waiting to be heard. One woman shouted “hier kom ‘n ding” (here comes something) and promptly joined the women who entered the centre and began singing songs as they waited for the memorandum to be handed over.

#UIF: inside the Worcester Labour Centre, where Women on Farms members have just arrived to hand over their memorandum.@dailymaverick pic.twitter.com/WKU6rBGllD

Betty Fortuin, a farmworker from De Doorns, shouted “enough is enough” and told the crowd waiting to be helped in the centre that either documents disappeared in the centre or were stored. The police and labour officials asked the group to move outside, since there were too many people inside the small centre. Head of the Worcester Labour Centre Temebikile Hoza accepted the memorandum and signed it.

‘We have to get our house in order’

The memorandum had also been sent to minister Nxesi, who joined the morning session virtually. Addressing the women, he said: “Some of the matters raised are heart-breaking. I can only imagine the frustration of a farmworker who has to spend up to R60 on transport, only to find that the labour centre does not address the problem and they have to return home empty-handed.”

Regarding his department, Nxesi said: “We have to get our house in order.”

Five-hundred new labour inspectors were appointed in 2020, which will increase the number of inspections carried out on farms, the minister said. A senior delegation would be brought to the Western Cape to conduct a labour blitz on farms within the next few weeks.

Newly appointed director of the UIF in the Western Cape Siphokazi Qasana told the women “it is going to take time, but will change”. She said she had only been appointed on 1 May, so she was brand-new. She, too, described some of the complaints as “heart-breaking” and promised things would change if the group worked with her. DM