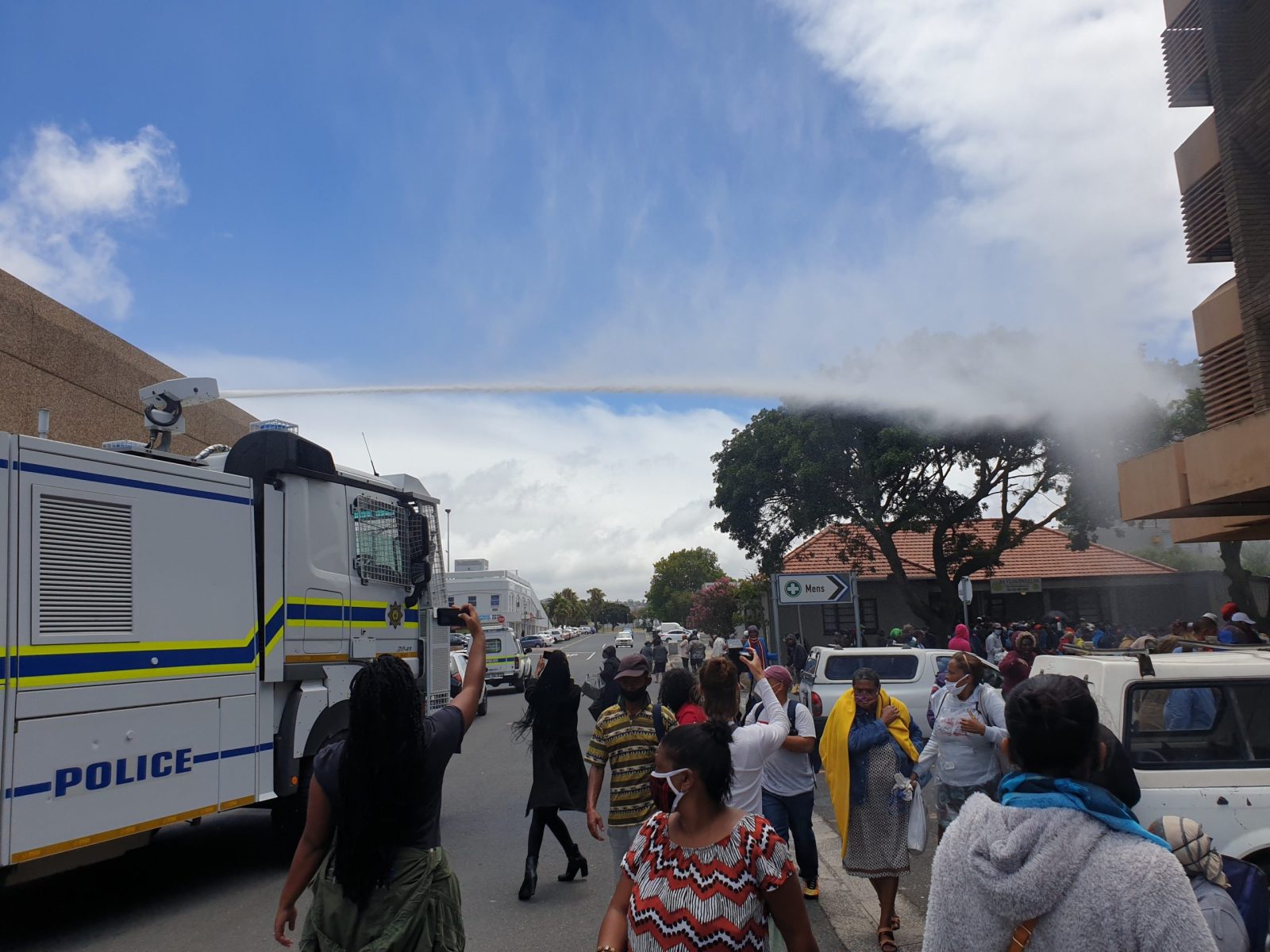 A report by Ipid has found that there was no misconduct when police used a water cannon on hundreds of people queueing outside the Sassa offices in Bellville in January. (Archive photo: Mary-Anne Gontsana)

The Independent Police Investigative Directorate (Ipid) has found that no misconduct was committed by SAPS when a water cannon was used on a crowd of social grant recipients queueing outside the SA Social Security Agency (Sassa) in Bellville earlier this year.

In the report, seen by GroundUp, Ipid said that “there were no lesser interventions at the disposal of SAPS” to disperse a crowd refusing to move and that no complaints were received of injuries from the incident. It also said the water was specifically sprayed in the air and not directly at people and only for a short time.

But the Western Cape legislature’s Standing Committee on Social Development has requested that SAPS and IPID be called to account for what it believes is a “disgraceful” report which “exonerates all involved in water-bombing vulnerable Sassa clients”.

On 15 January, the police (SAPS) were called to help with crowd control as hundreds of people were queuing outside Sassa in Bellville to renew their temporary disability grants.

SAPS then called in the public order police (POP) to help, who decided to use a water cannon to control the crowd.

The incident also coincided with a visit from Social Development Minister Lindiwe Zulu, who on the day said that “the situation was really getting out of hand and people were refusing to social distance and queue.”

According to Ipid’s report, a Sassa official initially sought assistance from law enforcement due to their inability to control the crowd as people were not cooperating with Sassa staff and security.

Abigail Peters, Black Sash Paralegal Fieldworker, was told by a beneficiary who was queueing on that day that there were grant beneficiaries who still queued even after being drenched in water, including elderly people.

In a recent statement, Fritz expressed disappointment with Ipid’s investigation and has said that someone must be held accountable for the incident. “What kind of society uses state resources to treat vulnerable people, Sassa beneficiaries, like this? The Ipid report seems to show that our state institutions allow for this,” said Fritz.

Similarly, Gillion Bosman, Chair of the Western Cape legislature’s Standing Committee on Social Development, said in a statement that the IPID report is “oblivious to the struggles that vulnerable residents face in this country every day”.

Bosman has requested that the matter is tabled at the next briefing with SAPS and that Ipid be asked to be present.

“It is beyond disgraceful that we have an Ipid report which exonerates all involved in water-bombing vulnerable Sassa clients. Minister Lindiwe Zulu was on site when this happened, and yet no head rolls,” said Bosman. DM