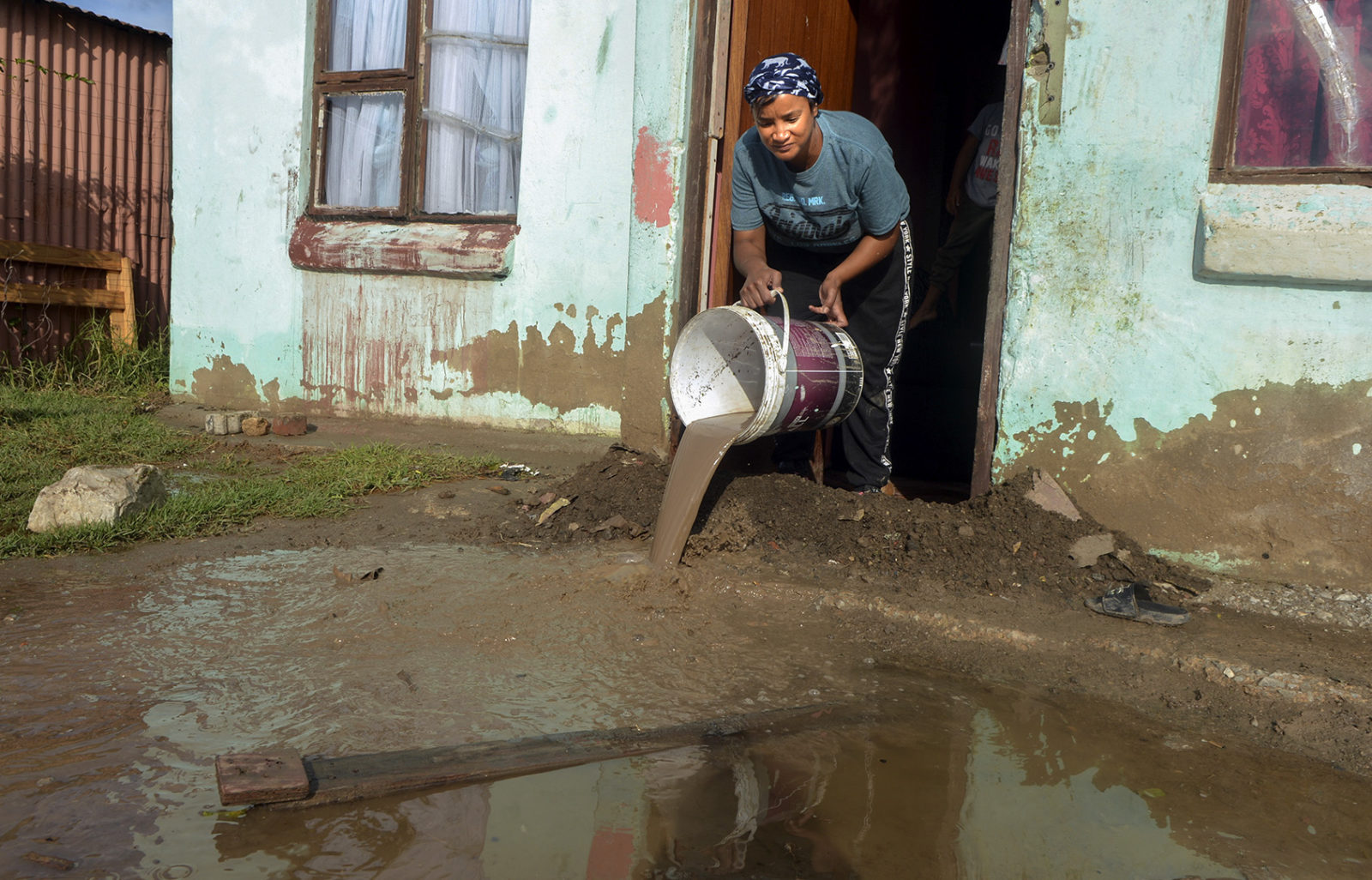 Missionvale resident Anthea Khona tries to clean her house after it was flooded. (Photo: Deon Ferreira)

A powerful early winter storm hit Nelson Mandela Bay and the Kouga region on Wednesday night, dumping up to 100mm of rain in places. But while the metro’s second-biggest dam snagged some of the deluge, very little fell in the catchment area of the Kouga Dam, which is currently at only 4% of capacity. There was also flooding in some communities.

Wednesday evening’s storm saw up to 100mm of rain falling in some areas, but not enough to have much impact on the water-stressed region of Nelson Mandela Bay and the Kouga area where dams are predicted to run dry in the next few months.

Garth Sampson from Weather SA said that rainfall intensity and amounts were patchy east of Plettenberg Bay, with between 1mm and 45mm measured at different locations in the metro.

“It is difficult to determine what happened in the Kouga mountains, but in and around Kareedouw, between 30mm and 45mm were measured. There were reports of flooding in places in the area, as well as of unmelted ice pellets still visible in places. This will add additional run-off,” Sampson said.

“In the area of the Impofu [dam] wall, unconfirmed reports were received of 100mm. Unfortunately, this was at the wall and not in the catchment area. This was not widespread rain over the entire catchment area.

“However, with that 30mm to 45mm in the Kareedouw area and reports of some good falls over a short period near the Impofu Dam, some run-off would have been caused, especially to the Churchill and Impofu dams.

“I don’t think much would have flowed to the Kouga Dam as not much rain fell on the Joubertina side. My personal conservative estimate would be a few percent to the Churchill and Impofu dams, with very little to Kouga.”

Sampson said the rainfall would provide a little “breathing space” as far as the water crisis was concerned.

Kouga is the biggest dam providing water to the Eastern Cape’s largest metro, Nelson Mandela Bay. According to the latest report on dam levels published on Thursday, Kouga is still only 4% full. The second-biggest dam, Impofu, is 15% full. It is expected, though, that run-off from the recent rains will add to Impofu’s levels and in the smaller Churchill dam which is currently 26% full.

Meanwhile, several houses and roads in the Kouga area were damaged by the downpour.

Kouga Mayor Horatio Hendricks said some areas received very heavy showers, with 100mm being measured in Humansdorp and around 75mm in Jeffreys Bay.

Sea Vista and 7de Laan in St Francis Bay were flooded, as were Ocean View and Madiba Bay in Jeffreys Bay and Arcadia, the low-lying areas at the informal settlement Golf Course, KwaNomzamo, Vaaldam and Kruisfontein in Humansdorp.

“The majority of houses flooded in these specific areas are either situated in low-lying areas, or built lower than the height of the roads,” Hendricks said.

He said houses and roads in Aston Bay and Paradise Beach were also damaged, as was the parking area at Harbour Road in St Francis Bay.

“The municipality and the interim joint operations committee are in the process of assessing damages and putting mitigation measures in place,” said Hendricks.

In Nelson Mandela Bay, the low-lying areas of Missionvale were flooded while the roofs of some homes collapsed during the storm. Houses in the Kleinskool area were also damaged and residents worked through the night to save their belongings.

On Thursday morning, angry residents set tyres alight in Missionvale after their homes were flooded. Nelson Mandela Bay spokesperson Kupido Baron said they were still assessing the damage caused by the storm.

More rain is forecast for the weekend. DM/MC