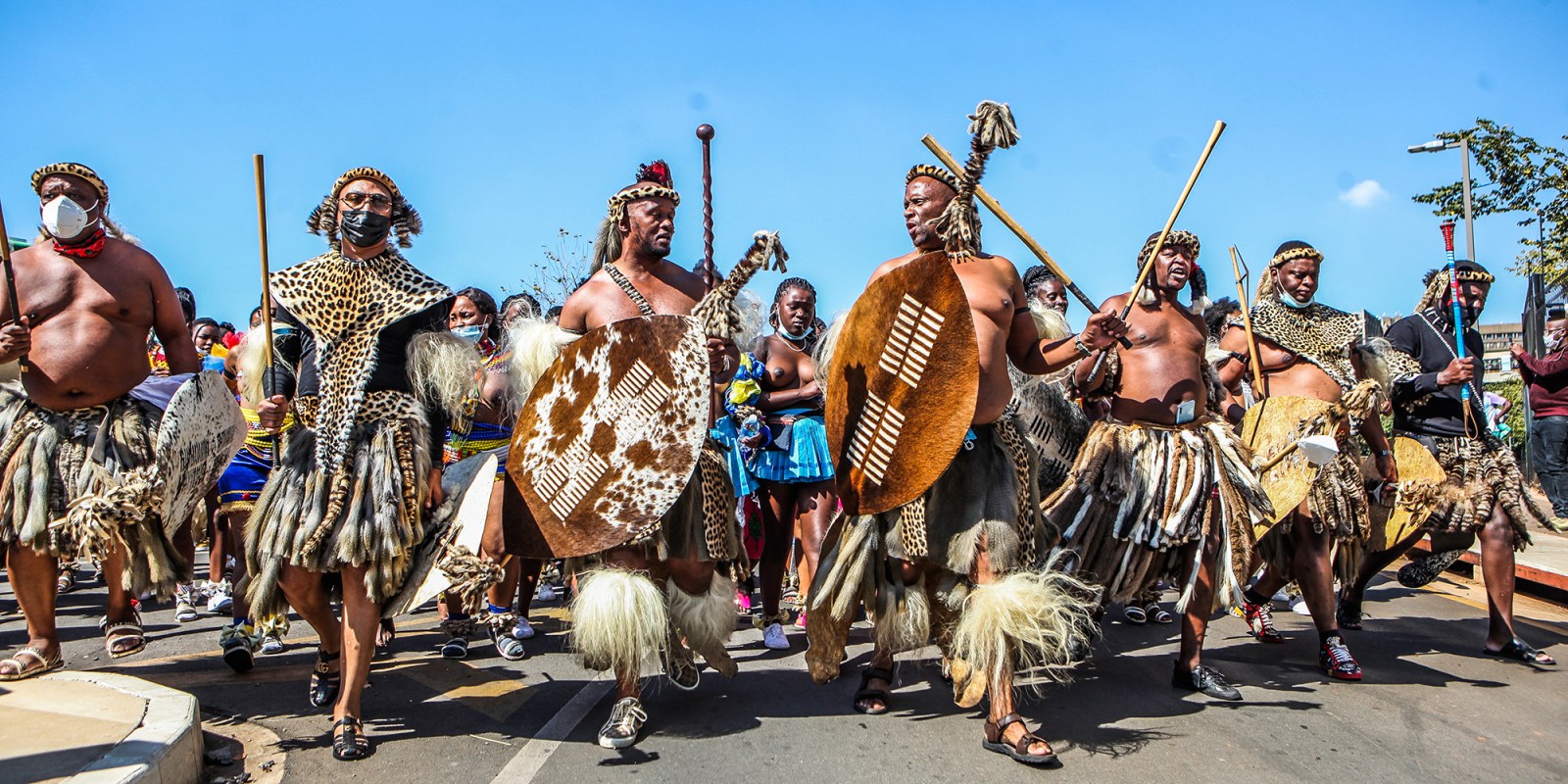 The procession of the body of late Zulu Queen Shiyiwe Mantfombi Dlamini Zulu on 5 May 2021 in Johannesburg. (Photo: Gallo Images / Sharon Seretlo)

While the burial and the special official provincial funeral for the late regent of the Zulu nation take place over the next few days, it will do little to dampen the royal tiffs about succession and the division of the late king and queen’s estate.

For more than two centuries since the inception of the Zulu kingdom, the kind of acrimony, bitter fallouts, backbiting and backstabbing that played out in the public glare this week would only have been whispered about among a select few within the royal sanctum.

Cupboard-loads of family skeletons, some decades old, tumbled out to light up social media and news platforms with titillating titbits about which senior members of the royal family were illegitimate offspring.

The fingered ones, in turn, let the world know that the one prince who had always presented himself as the anointed prime minister of the Zulu nation was, in fact, an impostor whose mandate expired a long time ago.

As if those brickbats were not enough, the Pietermaritzburg High Court now has to rule in the application by the king’s first wife who contends that she was married in community of property, and is thus entitled to half the king’s estate, despite his marriage to five other women after her.

Her children further contest the king’s will, arguing that his signature appears to have been forged and that no successor should be appointed until these matters have been resolved.

Meanwhile, the regent, Queen Mantfombi, has also died amid confusion about reports that she had previously been poisoned.

Her burial on Thursday morning and the special provincial official funeral on Friday will provide yet another battleground for royal tiffs to be played out in the open.

Both the provincial and national governments have pleaded with the royal family to iron out differences privately and honour the memory of the king and the queen by observing appropriate decorum during the mourning period.

But so divergent are points of view now and the accusations and counter-accusations so damaging, that it is difficult to see how issues that evidently have been simmering for decades can be glossed over for the sake of temporary harmony.

A cursory glance at some of the origins of the conflicts and their implications will make the point.

Short of Queen Sibongile abandoning her claim in court that she alone is entitled to half of King Zwelithini’s estate, it is difficult to see how a protracted and costly legal battle can be avoided.

The retired judge appointed by the king to handle such matters for him has already indicated that the estate will resist the queen’s attempts. The other queens are also unlikely to fold their arms while their share of their husband’s allocation is taken away.

The labelling by Prince Mangosuthu Buthelezi of Prince Mbonisi and Princess Thembi as illegitimate children in the royal family is a very serious matter because the two have been at the forefront of efforts to mobilise resistance against the appointment of Queen Mantfombi as regent ahead of Prince Mbonisi.

More critically, they are once again sharply raising the issue of Prince Buthelezi’s role in the affairs of the Zulu royal family as traditional prime minister. They contend that he has imposed himself, and was not even appointed by the late king. As the spectacle unfolded this week, Prince Buthelezi would tell the media one thing, while his detractors in the royal family convened their own media briefings to counter his utterances.

Having traversed this road for so many decades despite hostility from some members of the royal family who question his credentials, Prince Buthelezi has never been known to be one to back down.

The passing on of the regent while the Zulu nation was in mourning for the king now poses the immediate imperative to find another regent or expedite the process to install a successor.

History has taught us that at the best of times, issues of succession in the Zulu kingdom tend to bring out the worst in people as they position themselves to secure their interests.

What is unfolding at the moment points to another stormy road ahead, not least from another important front — the provincial government of KwaZulu-Natal.

Since the dawn of democracy in 1994, there have been heated debates and controversies around the government’s deployment of state resources towards the maintenance of the monarchy as an institution. The budgetary allocation for this financial year is more than R71-million.

While there was appreciation that King Zwelithini was a symbol of unity and peace in a province that had shed the blood of thousands in political conflicts between supporters of the dominant African National Congress and Inkatha Freedom Party, there have been lingering questions about the value of the investment in the institution.

The monarchy has been able to raise the profile of the province as a tourist attraction to events such as the annual Reed Dance and the Commemoration of the Battle of Isandlwana where Zulu warriors defeated the British in 1879.

Against that, there have been rumblings about the late king’s perceived extravagance, particularly whenever he added another queen who had to have her own palace that was maintained by the taxpayer.

In that context, it becomes important that the Premier of KwaZulu-Natal has also been dragged into the turmoil as a respondent in Queen Sibongile’s court application.

She argues that the entire estate is owned jointly and in equal share by her and the late king, and it can therefore not be disposed of as if it was the sole property of the late king. Now she wants the court to direct the premier to publish the records of the king’s assets and a list of blood relatives so that they become aware of her litigation.

It is unthinkable that in the past such a massive fallout in the royal family could have been for public consumption on such a large scale.

But then, over those many decades, gossip mongers, plotters and mischief-makers were not operating in 2021 in an age where media crews are always on the doorstep of the Zulu palaces — and WhatsApp, Twitter and Facebook are among the weapons as the descendants of the founder of the Zulu nation, King Shaka, tear his legacy apart. DM