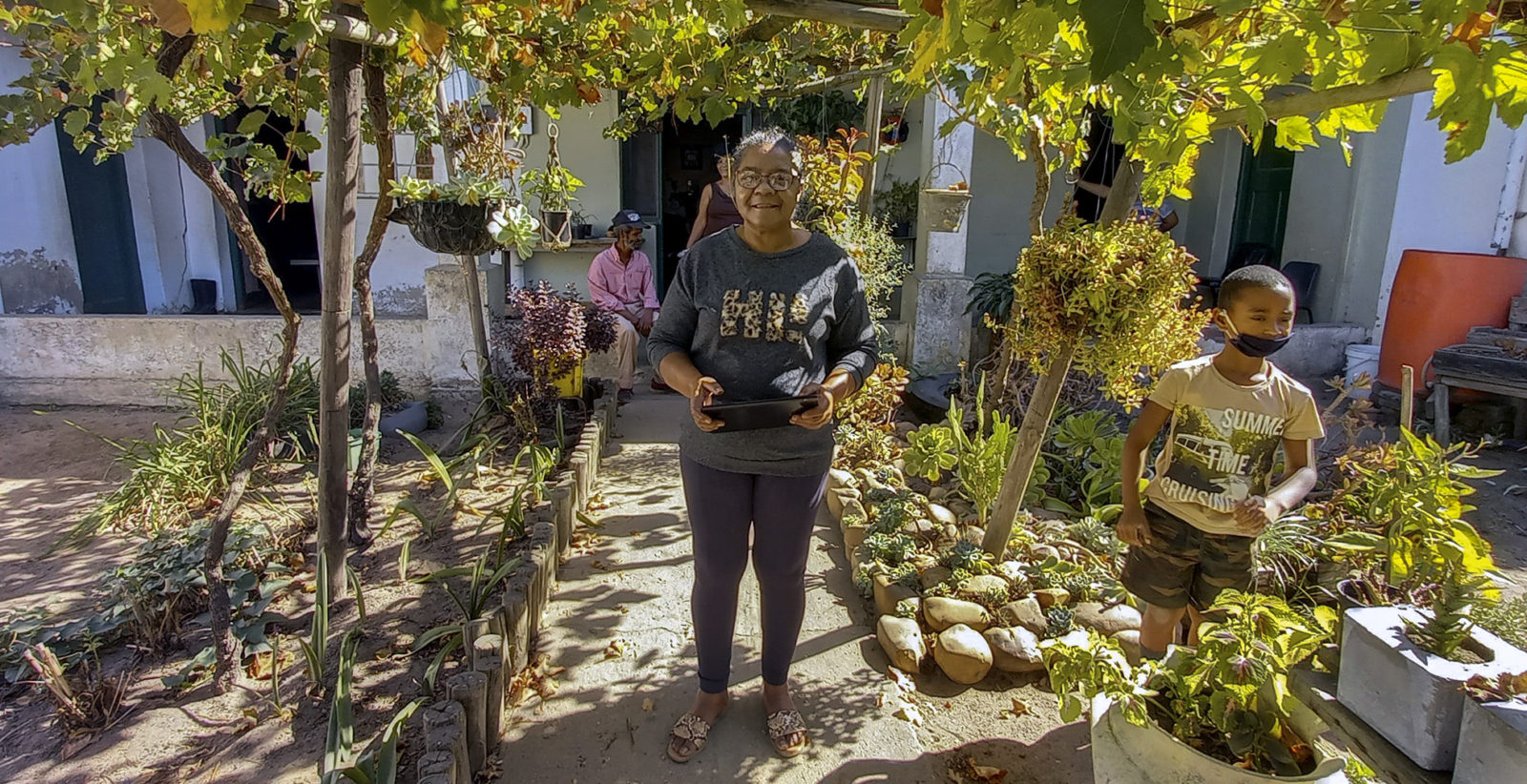 Community worker Dawn Jacobs said she was happy the long court battle was over and the eviction of 25 families at Hammansdans farm in Wellington in the Western Cape had been stopped. (Photo: Vincent Cruywagen)

The eviction decision, hailed as a ‘victory for the right to family life’, will go a long way towards protecting the rights of those living on farms. The elated workers say it brings an end to fears of looming homelessness.

A farmer’s application to evict the adult children of farmworkers employed on his farm Hammansdans outside Wellington in the Western Cape was dismissed by Judge Zeenat Carelse in the Land Claims Court on 13 April 2021.

Ashraf Mahomed, who represented the workers, said the judgment was a landmark ruling which in essence protected the rights of children and the right to family life.

The application was brought before the court by First Realty (Krugersdorp) (Pty) Ltd. The farm and company have been owned by farmer Chris Hamman since 2011. The eviction sought was in terms of the Extension of Security of Tenure Act, 62 of 1997.

The role of the act is to prevent unfair evictions and guarantees basic human rights for farmworkers and people living on someone else’s land in rural and peri-urban areas.

Hamman’s application relied on sections 10 and 11 of the act in seeking the eviction of 26 respondents residing in seven cottages on the farm. When he bought the farm, the cottages were allocated to seven of the respondents, being current or former employees, who had been living there for years with their families consisting of various combinations of spouses, adult dependents and non-dependents, and minor children. Hamman alleges that there are presently 60 occupiers, which is disputed by the respondents.

In his founding affidavit, Hamman argued that each employee and ex-employee’s right to occupy was limited to the extent that each of them was only permitted to extend their rights of occupation to their spouses and/or minor and/or dependent children. (The term “dependent” includes minor children and children who no longer attend school, but a tertiary institution.) He also alleged that they had agreed to this in writing.

In papers before the court, Hamman listed the circumstances that gave rise to the application for eviction. These included the limited size of his property (25ha); the fact that the cottages were suitable only for a single small family unit; that the cottages were in a state of disrepair; that the occupiers had disregarded access routes and as a result of uncontrolled access, theft and damage to property on the farm had occurred; that habitual abuse of alcohol by some of the occupiers had led to public violence; and that circumstances on the farm directly affected his business and he was in danger of losing his trade-sector accreditation.

The employees and ex-employees who faced eviction include Gertjie Mitchell, who lives in cottage one with his wife, Bettie, and their two adult non-independent children, Michelle Haarvoor and Gerhard Mitchell. Willem Januarie, who has lived on the farm for 26 years, lives in cottage three with his wife Dolfina, their two adult non-dependent children, Anna-Marie van Wyk and Jeremy Januarie, and three minor children.

Because the rights and duties of the employees and their former employer were not in writing, Hamman prepared written agreements regulating the relationship between him and his employees. This agreement was presented to the employees in October 2012. Clause 13 of that contract stated clearly the employee would be entitled to have relatives live on their premises, subject to the employer’s prior consent.

However, in October 2015 new contracts were concluded and in the same year, Hamman undertook a process of requesting each employee to take all necessary steps to ensure that the housing rules were complied with. This included that, once their children reached the age of majority and/or became self-supporting, those children vacated the property or that steps were taken to ensure this happened.

The eviction process dates to 11 April 2017, when notices were sent to the adult non-dependent children to vacate the property. None did so, and notices were again delivered on 6 March 2018 to each employee and ex-employee, as well as their spouses.

Court papers showed that on 4 April 2018, Hamman called for another meeting to discuss the process taken. A final notice was sent on 30 April 2018, calling upon families to vacate the property by no later than 31 May 2018.

However, the court found that none of the adult non-dependent children had been invited to the meetings.

Farmworkers told Maverick Citizen that the ruling had brought an end to their fears and nightmares. Since 2017, when the process began, they had endured sleepless nights owing to their looming eviction.

Dawn Jacobs, an activist with the Drakenstein Civic Organisation, described the ruling as a breakthrough: “In terms of this judgment the farmworkers at Hammansdans cannot be evicted. There are still several evictions pending in the Paarl region. We want the courts to use this ruling to stop all evictions.”

Willem Januarie said: “We were told by the farmer that our children over the age of 18 must leave the farm. We asked him where we should send our children, because we don’t have the finance to buy [them] houses. Later we were told if the children don’t want to leave then our wives must leave, and then he asked all of us to leave.”

Katrina Bailey, one of the respondents, said she could not hold back tears when she read about the ruling on social media, and when her children sent her a WhatsApp message saying: “Mommy, we have won the case.”

Wendy Pekeur, leader of the Ubuntu Rural Women and Youth Movement, and Nosey Pieterse, president of the Black Association of the Wine and Spirits Industry, said several farm owners had been responsible for tearing families apart. The ruling would “bring an end to this inhumane practice”.

The ruling gave protection to children and to the right to family life, Pieterse said. However, he cautioned that there was another approach farmers could use to get children over the age of 18 off their farms.

“They can ask for a high rental which [neither the] parents nor the children can afford. This is a tactic to not evict parents and children from the farm, but to force them to leave. [The Extension of Security of Tenure Act] is a sophisticated instrument that gives farmers lawful procedure to evict people.”

Pekeur explained that during an event on 21 March 2020 she asked the South African Human Rights Commission to delve into the right to family life. According to her, most farmworkers were not informed about their rights as enshrined in the act.

“We have published an Afrikaans [Extension of Security of Tenure Act] booklet and handed it to farmers, to inform them of their rights when it comes to eviction. The entire Western Cape is facing problems when it comes to [the act].

“Just before lockdown, in March 2020, I received information about a couple requested by a farmer to let their children leave the farm. Due to the lockdown nothing was done to stop the process. Eventually the parents resigned and left the farm with their children. This is the kind of inhumane treatment that this ruling will bring an end to.”

Mahomed said: “The judgment is a victory for all workers, their minor kids and their adult non-dependent children working and staying on farms. The applicant came to court with a half-baked case. The judgment put a stop to an abusive practice where procedures are pushed aside.”

Approached for comment by Maverick Citizen, Hamman responded simply: “At this stage I don’t have any comment.” DM/MC