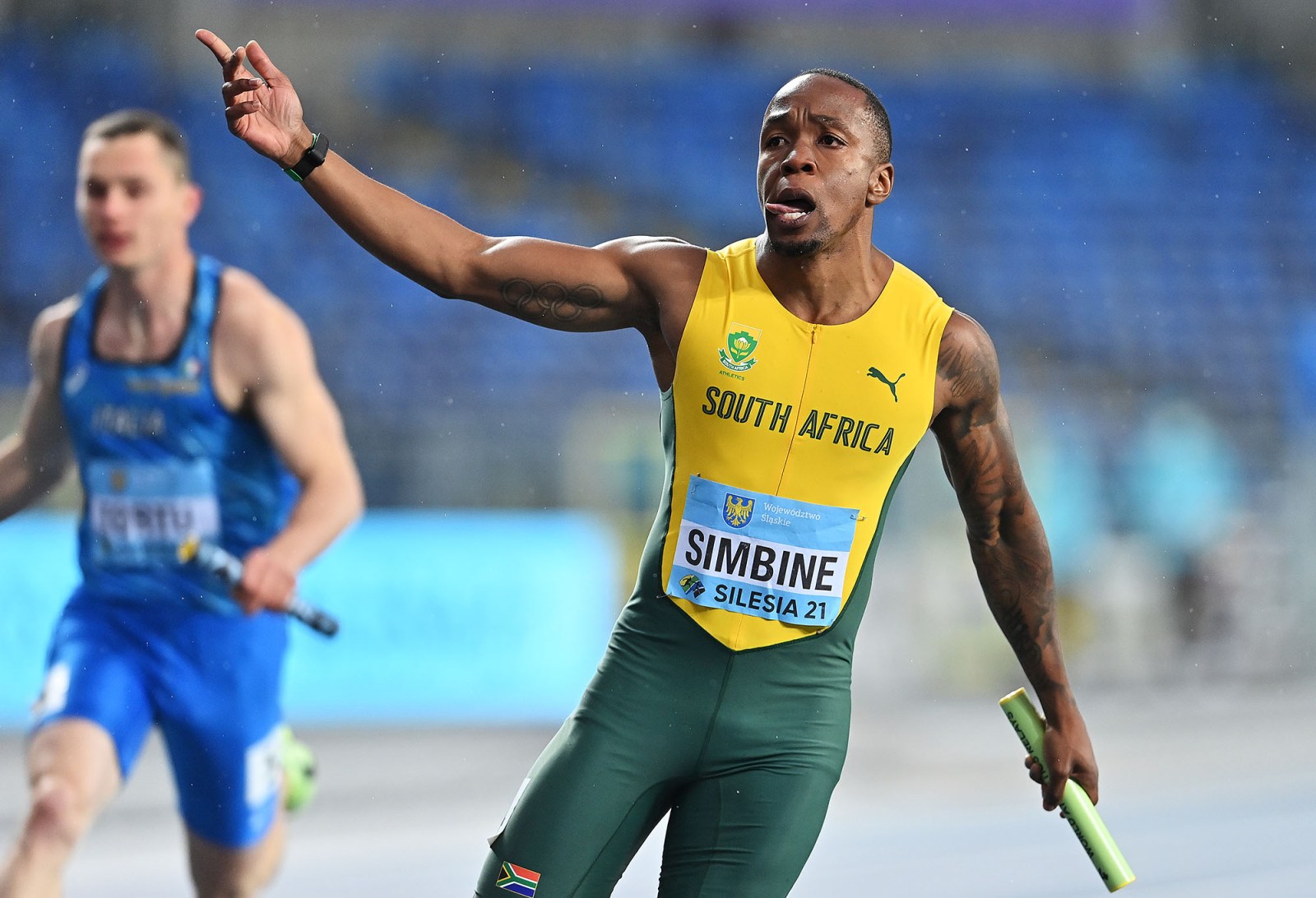 South Africa’s sprint quartet’s 4x100m gold medal at the World Relay Championships at the weekend increased their claims for a medal at the Tokyo Olympics later this year. But they’ll have to pick up the pace.

South African 100-metre champion Akani Simbine showed why he is among the world’s elite sprinters as he overcame a three-metre deficit when he took the baton on the final leg of the 4x100m World Relay Championships race in Silesia, Poland on Sunday.

Three metres on the track over 100-metres with a flying start, is roughly a 0.4 second deficit on the clock. Simbine made that up with every millimetre to spare. He dipped for the line to give SA gold over Brazil, whose final leg sprinter Paulo Andre Camilo de Oliveira, faded in the final 10 metres.

With the flying start, Simbine’s final split was timed at 9.03 seconds. He recently clocked a wind-assisted 9.82 seconds in the 100m semi-final at the SA Nationals in Pretoria. Simbine is not only displaying the form of a potential Olympic medallist but the big-race temperament of one too.

In Sunday’s final, Simbine ate up the metres and then, with great composure and timing, dipped on the line, stopping the clock at 38.71 seconds, 0.01 second ahead of Brazil. The South Americans were later disqualified for running out of their lane.

It was South Africa’s first-ever gold medal at the World Relay Championships. The rest of the quartet included Thando Dlodlo‚ Gift Leotlela and Clarence Munyai.

The result vindicated Athletics South Africa’s (ASA) decision to hold a relay training camp in February and was a positive sign that the men’s relay squad are definite medal contenders at the Olympics.

Some of the world’s leading teams such as Jamaica and the USA were not in Poland due to the complexities of travelling under Covid-19 restrictions, but for Simbine and his team, it was vital they made the effort to be there.

“Our journey was a bit tricky, we travelled for close to 30 hours but we’re grateful we’re able to compete,” Simbine said before the final. “It’s been a priority for us to get here and get here in the best shape.

“We’re a country that believes in ourselves and the talent that we have. We’ve been trying to get the team together and make sure we’re ready to compete once we get to Tokyo. That for us is going to be an important chance to do something great for our country.”

And boy, did they deliver on that promise.

Ground to be made up before Tokyo

While the relay gold medal and the performance are deservedly celebrated, Simbine as much as anyone else, knows that tougher challenges await when the likes of Jamaica and the USA compete.

The hours of travel, a small period of isolation, several Covid-19 tests and the cold weather were all challenges that needed to be overcome in Poland.

These are some of the same challenges to be faced in Tokyo too, which makes this entire exercise in Poland even more worthwhile. The confidence and experience the team gained are invaluable.

The Olympics will be a huge step up when some of the world’s quickest sprinters gather. But Jamaica will be without Usain Bolt for the first time in four Olympic Games cycles, which throws the event wide open.

Relay races by their very nature are fraught affairs, with changeovers always one mistake away from total disaster. With a sprinter of Bolt’s quality, Jamaica were able to overcome small errors because of his sheer ability to blast challengers away in the final leg.

South Africa have focused on skill as much as speed in their quest for an Olympic relay medal and they’ll have more training together before Tokyo.

South Africa managed to not make any costly errors in tough circumstances in Poland, and that was ultimately the difference. For all of Simbine’s pace over the final leg, had the team lost 0.02 seconds somewhere else in the race, they would’ve lost on the line.

Tokyo in late July and early August will be steamy and as a result sprinting times, at least, should be quicker.

South Africa’s 38.71 second winning time isn’t in the top 650 fastest 4x100m relay times in history. Jamaica holds the world record at 36.84 seconds set at the 2012 London Olympics. On the track, that would have put Bolt’s team about 20-metres ahead of Simbine’s men last Sunday. Bolt clocked an incredible final split of 8.70 seconds in that world record run.

Even South Africa’s national record of 37.65 seconds, set at the World Championships in Doha in 2019 with a team that included three –  Simbine, Munyai and Dlodlo – of Sunday’s quartet, would have been 10 metres further down the track if the two races were superimposed over each other. Simbine for instance ran an 8.88 second split in 2019.

But that did not matter in Poland last weekend because the glinting South African four beat the field and that ultimately, is the only measure of success in a race. Record times are icing, they are not the cake.

Every race is different, every set of conditions are different and every event comes with differing schedules and pressures.

What South Africa’s quartet proved is that they are among the fastest in the world and they will get faster as the weather and competition heat up.

South Africa’s men’s 4x100m relay squad are not only World Relay Champions. They are also genuine Olympic medal contenders, which is not something a small country can often boast about. DM