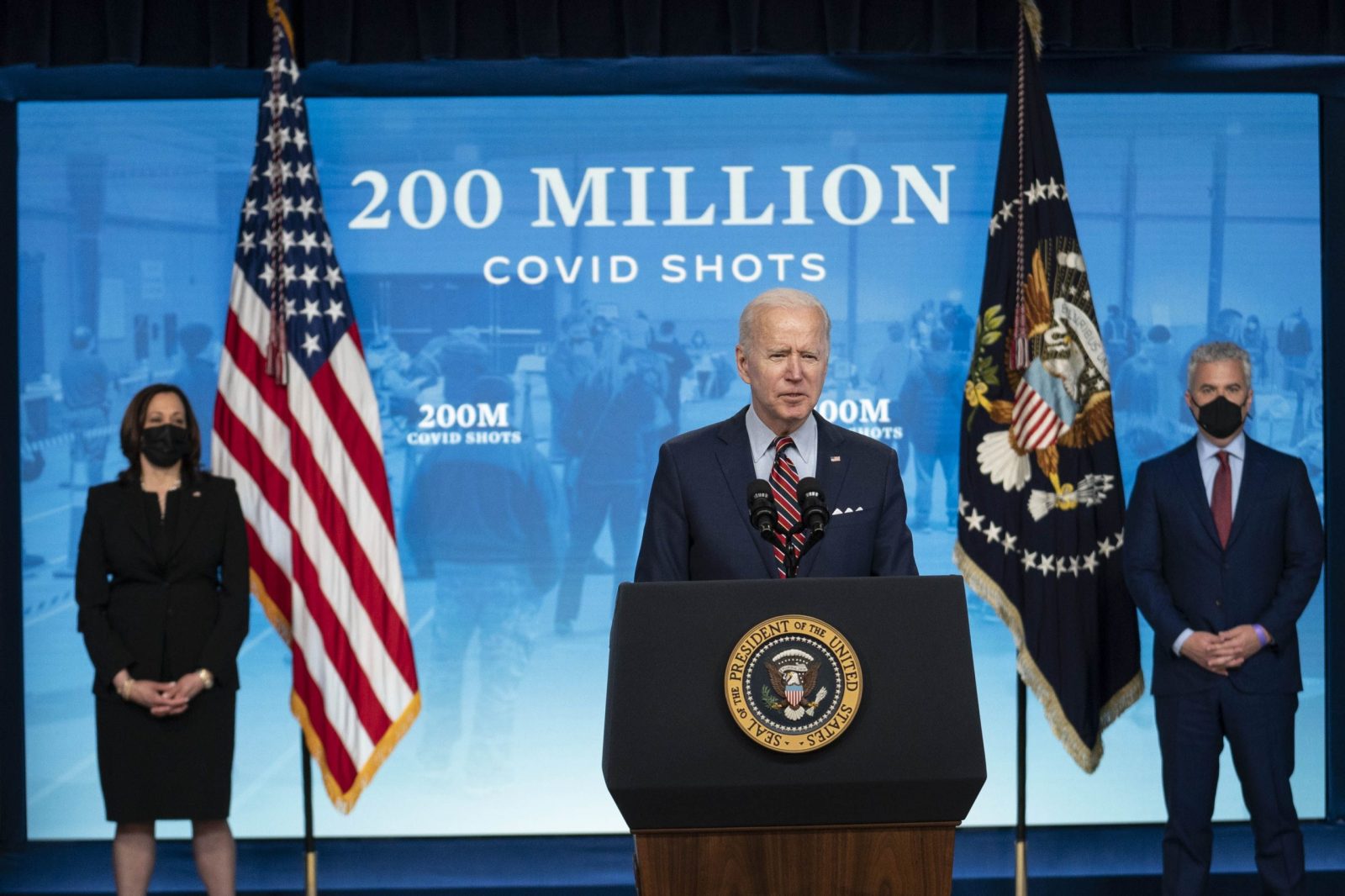 US President Joe Biden – accompanied by Vice-President Kamala Harris and Jeff Zients, White House Covid-19 coordinator, announces on 21 April 2021 that the US will achieve its goal of 200 million vaccinations in his first 100 days in office.

The country’s top infectious disease expert sounds a warning about vaccine durability, while some health experts fear that if the US does not reach herd immunity before next winter, it will face a barrage of new Covid-19 variants.

By Monday, 3 May, the Covid-19 US Centers for Disease Control and Prevention’s data tracker showed that the country had jabbed more than 200 million people, about 105,523,520 (31.8% of the population) of whom are fully vaccinated. Infectious disease specialist Dr Anthony Fauci has repeatedly said the US needs to vaccinate 70% to 85% of its population of about 331,5 million before it can contemplate returning to a pre-pandemic lifestyle.

There are also questions around booster shots, which became a hot topic in mid-April due to uncertainty about how long the vaccine was effective.

Fauci also explained that people should not confuse how long the vaccine works – its durability – with how effective it is:

“Right now, right away, 14 days after your second dose you have a very, very effective vaccine and you are highly, highly protected. The additional boost is referring to the durability of that protection, how long it lasts… we are trying to figure out how long that durability prediction lasts. We know it goes out at least six months and likely considerably longer, but we are not sure exactly how long… when the efficacy goes lower you may need a booster shot… and it may be one that you need periodically, similar to influenza… it means that we’re staying prepared.”

Meanwhile, America continues to open up slowly but surely as summer takes hold and people are itching to throw off both winter and often self-imposed house arrest due to the pandemic. At the weekend, New York Governor Andrew Cuomo also announced that New York City indoor dining would be able to expand to 75% capacity from 7 May. In California, Disneyland is preparing to open for the first time in more than 12 months.

Fauci also stressed that potential variants could be the biggest problem when it comes to turning the tide on the pandemic and getting the maximum benefits from vaccinating more and more people. Experts are concerned that if enough people do not get vaccinated before the winter, new variants will continue to emerge as the virus continues to circulate and mutate.

The US Food and Drug Administration is also set to clear the use of the Pfizer/BioNTech vaccine for children aged 12 to 15. Some epidemiologists have raised concerns that children, who make up about a quarter of the population, are not eligible to receive the Covid-19 vaccine but can spread the disease. One epidemiologist has likened not being able to vaccinate children as starting with “hands tied” in attempting to achieve herd immunity.

Around America, vaccines are becoming more easily available, including at local chain pharmacies such as CVS and Rite Aid. This is part of making it easier for more people to get vaccinated without having to worry about transport problems and time away from work.

According to Bloomberg’s Covid vaccine tracker only about 7.7% of the global population has been inoculated so far, with more than 1,17 billion doses administered. As feared when vaccines were in development, wealthy countries acquired the majority of available doses, leaving poorer nations struggling with no or few doses.

A case in point is the US, where in January, before being sworn in, Secretary of State Tony Blinken said then president-elect Joe Biden would ensure that America joined the COVAX initiative.

In February, the White House announced that “the United States will provide an initial $2-billion contribution to GAVI, the Vaccine Alliance for the COVAX Advance Market Commitment” and “will also take a leadership role in galvanising further global contributions to COVAX”.

Yet, in March and April, US media were reporting that the country looked set to have 300 million extra doses by July and that the authorities were “vague” on exactly what would happen with any surplus doses.

In mid-March, Biden also said “we’re talking with several countries already” about giving them some of the US’s extra doses. He did not say much more and did not name names.

On 18 March it was widely reported that the US was planning to send four million doses to Canada and Mexico, with White House spokesperson Jen Psaki saying: “It is not fully finalised yet, but it is our aim.”

Then there are other unforeseen issues, such as in the Democratic Republic of Congo which received more than a million doses of Covid-19 vaccine at the beginning of March thanks to COVAX .

The DRC planned to use these to vaccinate an initial 20% of its population of more than 80 million. But owing to fears the AstraZeneca vaccine might lead to blood clots the country delayed its roll-out. At the end of April, the United Nations Children’s Fund announced it would redistribute more than 1,3 million of the DRC vaccines before they expire on 24 June. DM