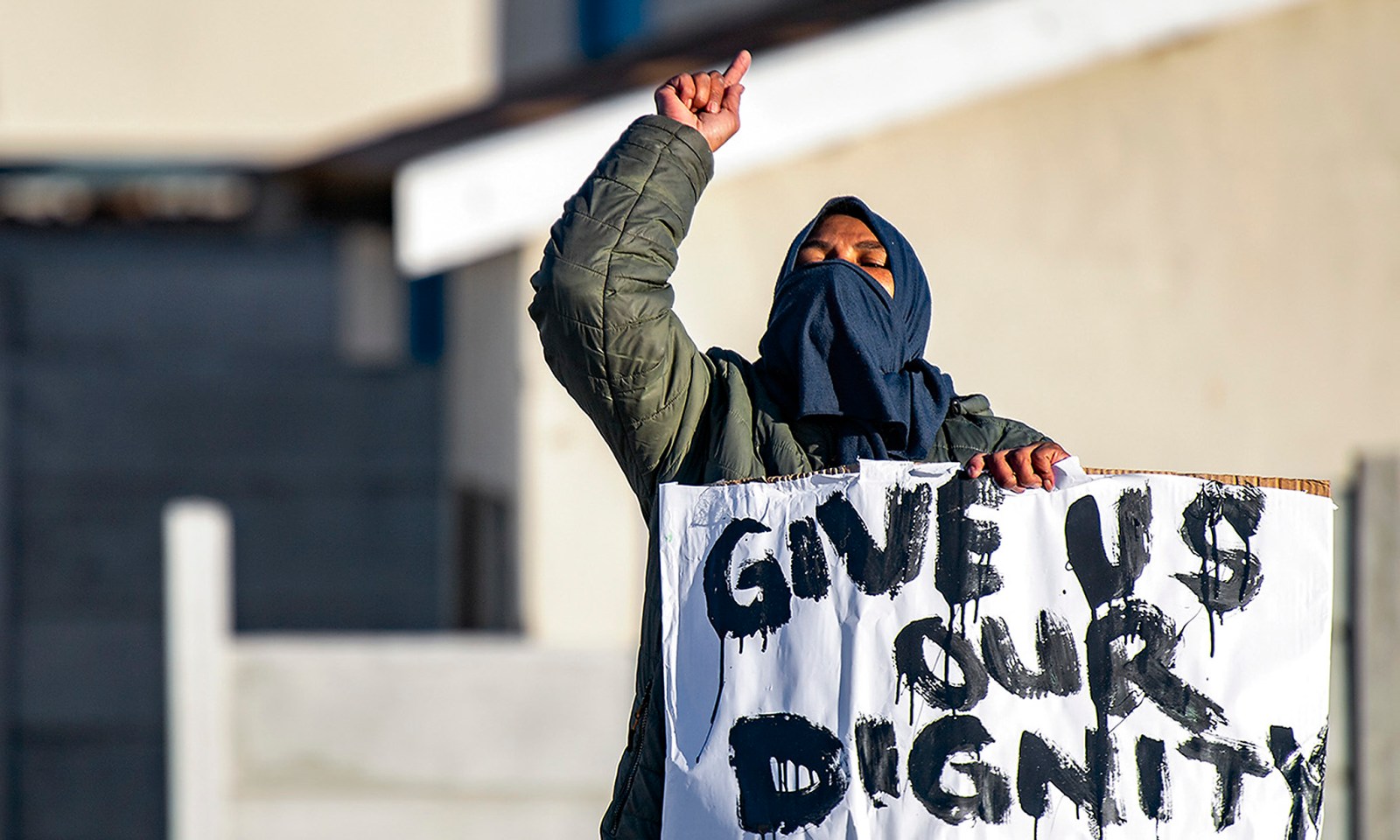 Residents demonstrate along the Duinefontein Road during a large scale protest action in the Cape organised by the group Gatvol Capetonian on July 27, 2020 in Cape Town, South Africa. It is reported that the group aimed to highlight the plight of communities in relation to various issues, including housing, job opportunities and poor service delivery. Rubber bullets and teargas were used against protesters along the N1 highway near Joostenberg Vlakte. (Photo by Gallo Images/Die Burger/Jaco Marais)

It is very difficult to show or prove that something didn’t happen because of action taken to prevent it. This is one of the challenges facing anyone working to prevent violence. So, when one actually witnesses actions that prevent violence, this is a good opportunity to draw lessons.

I had this chance over the past 10 days when water was cut off for seven days to the communities of Hoekwil and Touwsranten in the Eden district of the Western Cape in South Africa, where I live.

Anyone privileged enough to have water gush out of a tap in their house every time they open it knows how frustrating it is when that luxury is no longer available. For those who have to collect water outside from a communal tap, the challenges are even greater. Add a baby, or an incontinent elderly family member, or a child with diarrhoea, and you have an incendiary mix – and an example of gendered, structural violence.

The Institute for Security Studies’ Public Violence and Protest Monitor shows that in South Africa, frustrations with water and sanitation delivery failures resulted in 585 cases of public protest between January 2013 and April 2021. Of those incidents, 378 (65%) turned violent (see graph).

The protests directly affected over 57,000 people. This is if one tallies only the number estimated to have been involved in the demonstrations. It doesn’t include those affected because roads were blocked or infrastructure damaged or because they were police officers or health workers who responded.

The number of people indirectly affected by not having access to water or sanitation is far greater. The cost to the government, communities and individuals is vast – probably far greater than it would have cost to fix the problem that caused the anger in the first place.

Why did the lack of water not lead to violence in Hoekwil and Touwsranten? It wasn’t because we haven’t experienced violent protests in the past, or because there’s something special about this small town, nor is it because it is a small town.

Indeed, a significant number of protests in response to water and sanitation failures were in small or medium-sized towns in all provinces across the country. Rather, violence in Hoekwil and Touwsranten was prevented due to four key factors.

The first was good communication via multiple platforms. When a main water pipe burst and water was cut off, residents were told within 24 hours what the problem was, what was being done to fix it and how long it would take for water to be restored. Messages came from the mayor, local councillors, people living in the community and working on the pipe. They were relayed by word of mouth, through WhatsApp groups and on Facebook.

The second was the deployment of effective, non-threatening law enforcement. No South African Police Service members were involved. Instead, municipal law enforcement vehicles were stationed at the community centre and monitored the area. Officials staffing the vehicles answered questions about when and where water tankers would be available and explained why at times, they were late.

Third, those affected were treated with respect. One water tanker was stationed in the affluent part of town to serve a community of members who mostly have their own cars. Two or three tankers were sent to where people mostly don’t have private transport and would have to carry buckets.

One tanker moved around the informal settlement for ease of access (so that residents didn’t have to walk far with heavy buckets), while another was stationed at the community hall. And the people staffing the tankers were friendly and helpful and spoke kindly to the groups of curious children who gathered to watch and help and play around the truck.

Fourth, the problem that caused the water to be cut off was fixed by installing new pipes. While mostly middle-class folk lamented the failure, no one from Touwsranten or Hoekwil could really get angry because they knew what was happening, could get water if needed and felt heard and cared for.

These four simple, effective steps by local government that prevented anger spilling over into protest beg deeper questions about the relationship between citizens and the state. This example shows what’s needed to build trust between citizens, local elected officials and national government. These lessons can help avoid the human and financial costs of failures in relationships and infrastructure.

Ward committees (elected bodies of citizens who meet regularly with their local councillors) would be the right place for problems to be raised and resolved locally. But research conducted in 2009 showed that ward committees work only when you have “capable councillors, when the local governing political party supports the local community on key issues, and when the municipality is well run.”

Unfortunately, such conditions have not been met in most municipalities. It is also doubtful whether most citizens are even aware of the existence of ward committees in their areas. Maybe residents and local councillors would only engage in constructive relationships that prevent service delivery crises and the accompanying harms if party politics didn’t feature in local government.

While that is unlikely, the Hoekwil and Touwsranten case shows that prevention is possible and that quick, respectful responses by local government can offset the damage of failed service delivery. DM