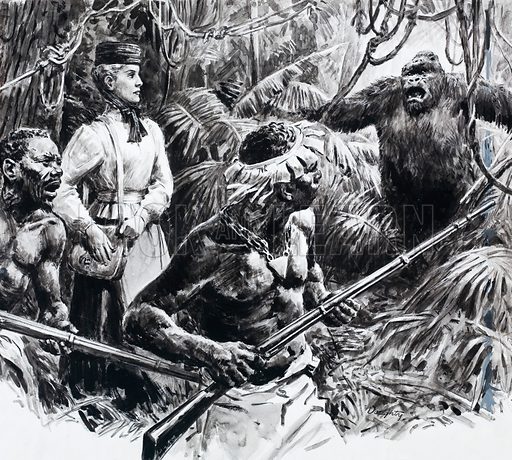 The explorer Mary Kingsley. Original artwork for Look and Learn by CL Doughty.

In 1895, Mary Kingsley became the first woman to climb Mount Cameroon, although she had to ask herself now and again: Why did I come to Africa?

Her apparel was unlikely: long, black, trailing skirts, tight waists, high collars, a small fur cap, lace-up shoes and a parasol. In every respect she was unusual. With no formal schooling, she consumed her father’s considerable London library and nursed her ageing parents, never travelling far, until they died. Then she packed her portmanteau, created some scientific equipment and headed for West Africa. She charmed and spent time with the cannibal Fang tribe up the Ogooue River in what is now Gabon, discovered many new species of insects, plants and a fish and wrote two books that made her famous. She died nursing Boer War prisoners in Simon’s Town in 1900 aged 37. This is her story of climbing the brooding Cameroonian volcano.

Sailing north along the African coast, Mary Kingsley spotted Mount Cameroon and was struck by a great temptation. “I feel quite sure that no white man has ever looked on the great peak of Cameroon without the desire arising in his mind to ascend it.” No woman ever had.

By then a consummate collector of botanical specimens and fetish objects as well as a fine documentarist of her travels, she captured the lure of the volcano in lyrical prose:

“Sometimes it is wreathed with indigo-black tornado clouds, sometimes crested with snow, sometimes softly gorgeous with gold, green and rose-coloured vapours tinted by the setting sun, sometimes completely swathed in dense clouds so that you cannot see it at all. But when you once know it’s there it is all the same, and you bow down and worship.”

Several months later she was to use far harsher words.

Having hired a crew and stocked up on provisions, she left the town of Victoria on 20 September 1895 amid canary-coloured and crimson butterflies. Soon she was plodding in mud, “intensely sticky, intensely slippery”, with the rain pelting down.

“I attempt to keep dry by holding up an umbrella, knowing that though hopeless it’s the proper thing to do.” The journey becomes a conflict between being “proper” and horrendous conditions. The irony of the impossibility is hilarious.

“I suspect,” she muses, “a fine view of the sea could be obtained from here if you have an atmosphere that is less than 99 ¾ percent water… the scenery is much like that you would enjoy if you were inside a blancmange.”

Her ankle-length skirt is soon sodden, her chin-high blouse stifling and her little fur hat a mess. But standards must be maintained. All stops require a cup of tea.

She overnights with a German officer billeted at Buea high on the mountain’s shoulder. He offers her a bath but she declines. “Men can be trying,” she complains. “How in the world is anyone going to take a bath in a house with no doors and only very sketchy wooden window shutters?”

After a few days she sets off again, commenting that the mountain looks awfully steep when you know you have to go up it. Her bearers say it houses devils.

They plunge through forests and ravines. “Soon all the mist-streams coalesce and make the atmosphere all their own, wrapping us in a clammy, chill embrace… I wonder now and again,” she reflects, “why I came to Africa.”

When they camp, the porters can’t get the fire going so she shows them how, learnt from Fang cannibals down the coast with whom she had spent time. She writes her notes “by the light of an insect-haunted lantern” and sleeps on a stretcher under a ground sheet that leaks.

The men get sulky, some desert, saying they “got fright too much”. Food begins to run out and she sends two back to the German officer for supplies and hopes they come back. The trees become sparse, replaced by spare bushes. But, ever the enthusiastic botanist, she notices beautiful yellow flowers.

“The space around seemed boundless. It was like a vision and it held me spellbound as I stood shivering on the rocks with the white mist round my knees. I scuttled off along the rocks like an agitated ant.”

Then a tornado “which has been lurking and growling” bursts around them. “Thunder, lightning like flights of spears, rain. It was impossible to hear or make oneself heard at the distance of even a few paces because of the shrill squeal of the wind, the roar of the thunder and the rush of rain.

“One feels as if one were constantly dropping among painful and violent discussions between the elemental powers of the Universe.”

The storm abates and supplies arrive – biscuits, candles, tinned meats, a bottle of wine and beer. “We are now all happy, though exceedingly damp.” She settles herself on the food box for the night. “I think as I wrap myself up in my two wet blankets and lean against my tree, what a good thing it is to know how to make oneself comfortable in a place like this.”

In the morning she wakes up stiff, having “been asleep against that abominable vegetable of a tree” and calls for tea, but “it should more truly be called soup, for it contains bits of rice and beef and the general taste is wood smoke.”

The men say they are “all done” so she leaves them to make camp and presses on with two volunteers. Far below the sea is “like a plain of frosted silver”.

The final ascent is gruelling. One of her party of two drops out and she presses on with one companion. Then he refuses to go further, so she leaves him wrapped in a blanket with a bag of provisions and goes on alone.

Soon she’s in stinging rain, then fog, but staggers upward. Through the grey she sees a cairn and some German beer bottles – the top. Kingsley places her card among them, aware it will soon rot. The rain is incessant and it’s hard to breathe.

“Verily I am no mountaineer, for there is in me no exultation, but only a deep disgust because the weather has robbed me of my main object in coming here, namely to get a good view.” She begins her descent.

Back in Victoria, clean and dry, she asks herself again: “Why did I come to Africa? Why! Who would not come to its twin brother hell itself for all the beauty and charm of it?” DM/ML