In January 2021 the World Health Organization warned that only a quarter of African countries had adequate plans for funding Covid-19 inoculation programmes. (Photo: Facebook)

There have been many unpleasant milestones since the Covid-19 pandemic broke out. For South Africa, 3 May is a particularly important one. It is one year since the day in 2020 when, according to the Medical Research Council, we reached the ‘point of rapid increase in excess deaths’.

Over the past year, approximately 150,000 more people have died than if we had not had a Covid-19 pandemic. One can quibble about the precision of the estimate, but the weekly estimates of excess mortality are put together by leading researchers who know what they are doing and use the best methodologies. It is the best estimate we have and the one that should be used.

It’s unclear how many of those deaths are directly due to SARS-CoV-2 infections versus people being squeezed out of the health system. Nearly all those excess deaths occurred in two waves: May to August and December to February when recorded Covid-19 infections, hospitalisations and deaths spiked. For this and other reasons, it’s reasonable to conclude that the vast majority of excess deaths are directly attributable to SARS-CoV-2 infections. 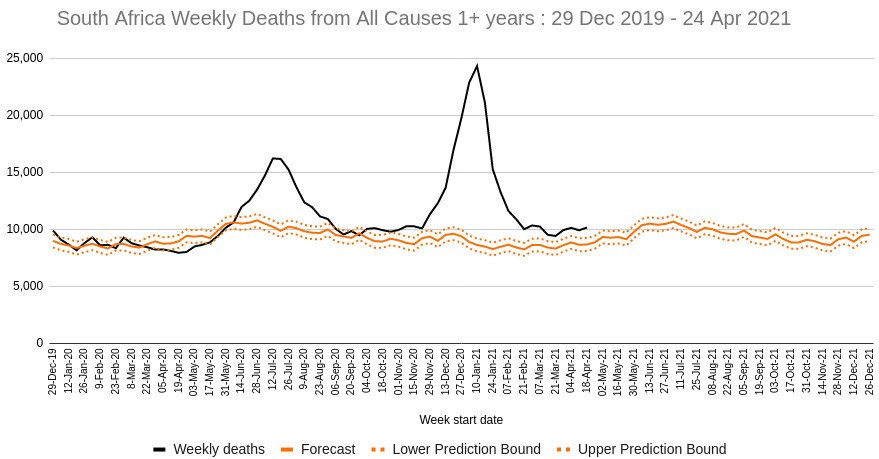 The official number of Covid-19 deaths, which is based on hospital data and ignores people who die in institutions or at home (and probably misses many hospital deaths as well) is about 54,000. It is not even in the ballpark.

Incredibly, this is a year in which there has been barely any seasonal influenza, and unnatural deaths (homicides, vehicle collisions, suicides etc) have declined. This raises the possibility that deaths directly due to SARS-CoV-2 infection may even be considerably higher than 150,000, but this is speculative.

Officially, South Africa has had 902 Covid deaths per 100,000 people (or nearly 1 in 1000 people), which places us 51st in this macabre world ranking. Hungary with 2,884 deaths per 100,000 (or about 1 in 347 people) is the world’s worst-hit country. But these statistics must be treated with great scepticism. Hungary has had an awful epidemic, but it is also probably much better than most countries at counting its Covid deaths. Lesotho, Zimbabwe, Mozambique, Namibia and Botswana have had barely any epidemics according to official statistics, but this is almost certainly a false picture. It’s all but impossible that our neighbours have escaped what we’ve experienced. Anecdotal reports from Zimbabwe confirm this.

If most of our excess deaths are due to SARS-CoV-2, then we’ve had an epidemic almost as deadly as Hungary.

The real cost of the epidemic is the mourning and anguish this has brought to families and friends across South Africa, the lost potential and lost love of those who died is immeasurable. There are also likely many hundreds of thousands of people who have survived Covid but continue to battle its after-effects.

The lockdowns have been extremely difficult psychologically and financially for tens of millions of South Africans. There is much to criticise about the way they were implemented, which was far too onerous and often irrational. Nevertheless, the lockdowns did save many lives and provided some relief to the health system. (There is no evidence that lockdowns themselves have caused excess deaths; quite the opposite.) But they have become increasingly unsustainable. It is plain to see that adherence to mask and physical distancing measures has become very poor.

We are not out of the woods: the weekly recorded deaths continue to bump along at higher than expected levels. A third wave is probable. If you confidently believe we are through the worst, consider that many people in India thought that as recently as February.

The most important task of government in 2021, and possibly 2022, is to make vaccines available to tens of millions of people. It’s still unclear if Covid-19 can be completely vanquished, but with mass vaccination, it can become a tolerable, even minor, public health concern. Moreover, to put lockdowns completely behind us and rejuvenate the tourist industry, we have to show the world that we have suppressed the pandemic.

With fewer than 350,000 people vaccinated, our programme has barely begun. This pandemic is far from over. DM