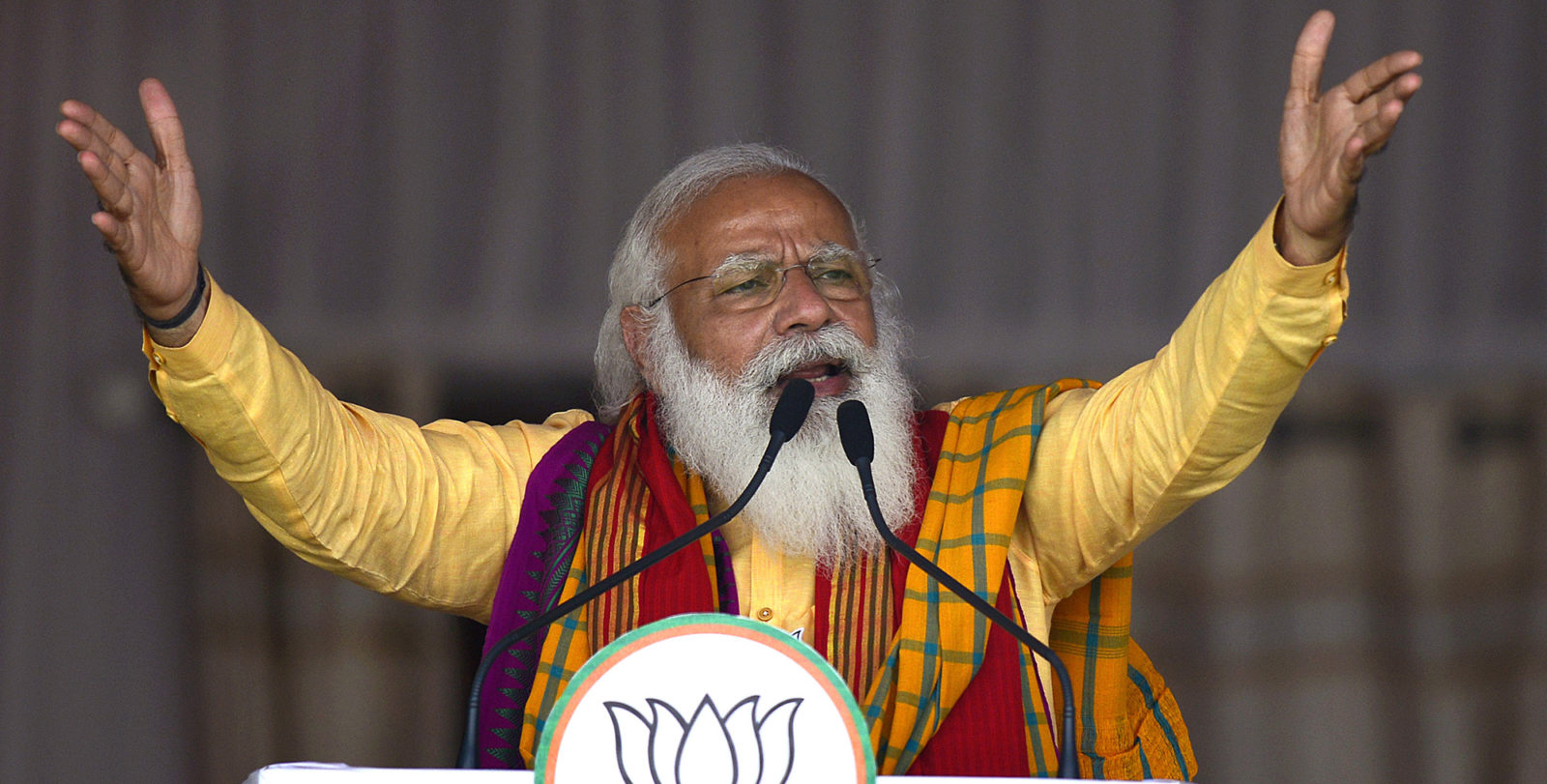 In an exclusive article for Daily Maverick, a veteran Indian journalist writing from the city of Chennai in eastern India describes the situation in many parts of northern India ‘as very bad indeed — apocalyptical to be precise’. He says the south ‘is better for the time being, though the current wave of the pandemic could arrive here also any time’.

Since mid-April, the heart-rending scenes beamed from the Indian capital New Delhi around the globe have been nothing short of apocalyptical. The situation is equally bad in other parts of northern India, with harrowing tales of entire blocks of ICU patients dying off as oxygen supplies abruptly shut off.

India’s second wave of Covid-19 has completely collapsed a fragile and under-resourced health system across large swathes of the country. By the last week of April, daily infections in India set a new world record by crossing the 400,000 mark. The daily number of deaths also touched 3,645, the highest number of fatalities in India in a single day since the start of the pandemic.

The official number of accumulated cases in the country has now reached more than 18 million, while the number of overall deaths has crossed 200,000. Many consider even these high numbers a severe undercount.

So what really happened? Why can’t the world’s fifth-largest economy — with the second-largest army and a space, nuclear and pharma superpower to boot — provide something as basic as oxygen to its choking citizens?

There are many reasons for this sorry state of affairs. Hubris, incompetence, defunct state institutions, a pliant media and the maniacal drive of the “Hindu nationalist” regime of Prime Minister Narendra Modi to put their leader’s own image before all other national priorities.

To be fair though, it is true that the sheer surge of cases, more than three times the peak figures of the first wave of Covid-19 in 2020, seems to have simply overwhelmed the system. This has been blamed on B.1.617, a highly contagious variant of SARS-CoV2, circulating at lightning speed across Indian cities and towns.

While in 2020 also, in many large Indian cities like Delhi and Mumbai, hospitals ran out of beds on certain days due to rising demand, there was never a major shortage of life-saving oxygen. As the surge in cases really took hold around the first week of April, India’s total demand for medical oxygen nearly doubled from 3,842 tonnes to 6,785 tonnes.

While India has three times more liquid medical oxygen available than the cumulative demand, the real problem then has been poor planning and inability to ensure efficient transport and distribution of oxygen to hospitals and refilling stations in major cities. Most of the oxygen is produced in the southern and eastern parts of India, while the high Covid-19 caseload is in western and northern India.

The lack of policy direction displayed, though, is closely connected to PM Modi’s penchant for decision-making driven by perceived political needs and ideological dogma rather than evidence. Since coming to power in 2014, he has also shown deep contempt for officials and advisers who display independent judgment, often replacing them with “party lackeys”, with little background in the subjects they are dealing with.

For example, in November 2020 a committee of Indian parliamentarians flagged the issue of oxygen shortage through a report tabled in parliament, which said, “The pandemic has led to an unprecedented increase in the demand for non-invasive oxygen cylinders and instances of lack of oxygen cylinders in the hospitals had also been reported.”

All this sage advice produced little action from the Indian government, which was busy trumpeting the virtues of Narendra Modi, a “strongman” in the style of Recep Tayyip Erdoğan, Jair Bolsonaro and Donald Trump. There are apparently shades of King Canute and Kim Jong Un too, evident from the way Modi’s ministers projected the natural ebb of Covid-19 cases after the first wave as due to the “guidance” of their “great leader”.

In his address to the World Economic Forum’s Davos Dialogue on 28 January, Modi himself mocked experts from around the world by saying “It was predicted that India would be the most affected country from corona all over the world. It was said that there would be a tsunami of corona infections in India, somebody said 700-800 million Indians would get infected while others said two million Indians would die”. He went on to boast that India “saved humanity from a big disaster by containing corona effectively”.

Making matters worse has been the culture of sycophancy within Indian scientific and research institutions as a result of which professionals with the backbone to withstand political pressure in government were lacking. One indication of the lack of professionalism was the absence of efforts to systematically collect data at the local levels in order to mount a calibrated response.

There were also ample instances of suppression of data and a general lack of integrity of information, even in critical areas of research. No wonder then, nobody at the topmost levels of the health system had a clue when the second wave hit India with the ferocity of a tsunami.

Early into the pandemic, the first indications of the state response to Covid-19 being on the wrong track came with the hasty imposition of a nationwide lockdown, announced by the Prime Minister on 24 March 2020 and implemented with just four hours’ notice. The lockdown, that brought the regular lives of 1.3 billion people to a complete halt, without any preparation for contact tracing, detection and patient management, training health personnel and ensuring adequate supplies of protective equipment and oxygen.

It also resulted in millions of migrant workers, stuck in large urban centres without jobs or state support, trekking hundreds of kilometres back to the safety of their villages all over India. Many died on the way, of hunger, thirst or simply run over by speeding vehicles.

The lockdown was also imposed without consulting India’s numerous state governments, which are responsible for most health-related infrastructure and initiatives at the regional level. The surprise measure left them scrambling to cope with its fallout and resulted in needless acrimony, when the need was for the greatest amount of teamwork.

Since the beginning of 2021, the triumphalist narrative around the pandemic has been followed by a reckless rush to restart the economy and remove restrictions on large gatherings across the country. The policy, in other words, swung from an extremely stringent lockdown last year to a free-for-all approach since January 2021 — with weddings, festivals, religious gatherings and entertainment venues back in full swing.

Amid all this, the Indian Election Commission announced polls in four states and a union territory resulting in hectic mobilisation of crowds for political campaigning. Even as New Delhi reeled under skyrocketing numbers of the infected, on 17 April Modi — minus his mask — marvelled at an election rally in West Bengal “…today, in all directions I see huge crowds of people… have witnessed such a rally for the first time”.

Later, in the last week of April, the Madras High Court came down heavily on the Election Commission of India for allowing political rallies during the Covid-19 pandemic and held it “singularly responsible for the second wave of Covid”. “Your officers should be booked on murder charges probably,” the judges observed in an unprecedented rebuke.

Worst of all was the go-ahead given by the Indian government — keen to please its fanatical Hindu supporters — to hold the Kumbh Mela. This religious gathering, normally organised once in every 12 years, was held a year ahead of its original schedule on the advice of astrologers. As a result, through the month of April, more than nine million devout Hindus took a dip in the holy river Ganges in the northern Indian town of Haridwar — making it perhaps the largest super-spreader event for any infectious disease in human history.

A major mitigating factor India possessed over many other nations battling Covid-19 was the country’s status as the world’s largest vaccine producer. This advantage, too, was frittered away as the Indian government turned the domestic vaccination drive and vaccine exports into an exercise in either scoring points over political rivals or further aggrandisement of “dear leader” Modi.

In other words, what probably explains the ongoing Covid-19 catastrophe in India best is that it is the result of a series of self-goals scored by the Indian government. Like the cytokine storm, Covid-19’s deadliest aspect, where the immune system turns against the human body itself, the Modi regime too has proved to be India’s biggest liability at a time of national crisis. DM/MC

Satya Sagar has been a journalist working in print, television and online media for the last three and half decades with experience of reporting in India and South East Asia. He has also been active on public health and human rights issues in India over the last two decades. He is currently an associate editor with www.countercurrents.org.