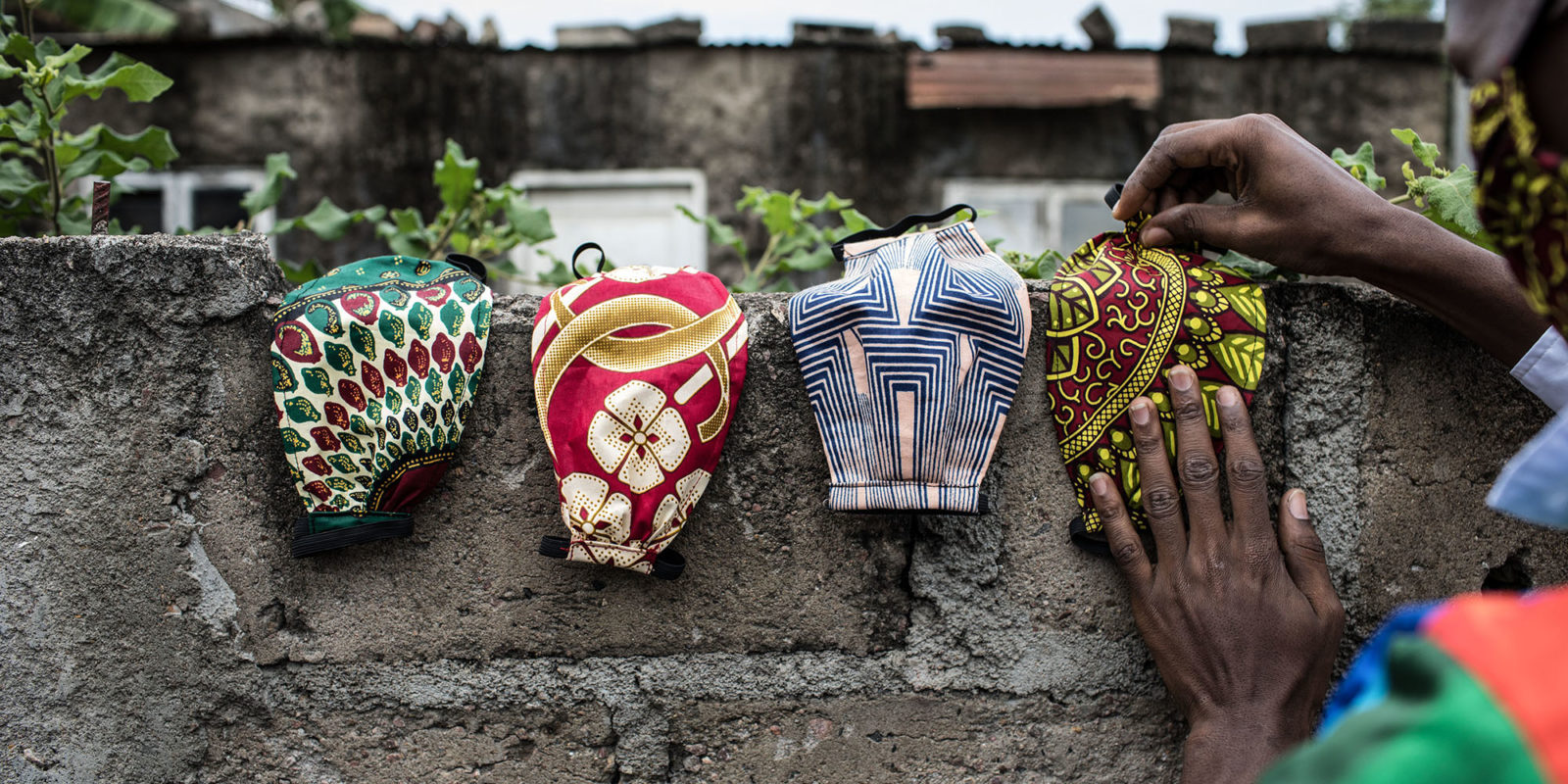 The number of daily coronavirus cases in India crossed the 400,000 mark for the first time, the highest for any nation, as countries rush supplies of oxygen and medical goods to the world’s second-most populous nation. New Delhi extended its lockdown, and a fire killed 18 patients in a Covid-19 ward in western India.

President Joe Biden banned most travel from India to the US, while offering more medical supplies. Australia announced that its nationals in India will face a fine of up to $51,000 and five years in jail if they return home.

In the US weekly infections were at the lowest level since mid-October. New York state reported the fewest daily deaths in more than five months.

Fans return to the Kentucky Derby

Horse-racing fans were back at Churchill Downs on Saturday for the Kentucky Derby after being excluded from the racetrack in 2020 because of the pandemic.

Punters were required to wear face masks, in line with local and state regulations, although the Associated Press reported that many were maskless.

Florida county to vaccinate in schools

Broward County, the second largest in Florida, will begin offering vaccinations at high schools on Tuesday, aiming to reach all public schools in eight days, the Sun Sentinel reported. All students 16 years and older are eligible, though those under 18 must be accompanied by a parent.

“The health department is looking for unique ways to get the whole community vaccinated, so this is just another way that they can ensure that everyone has access to it,” Broward Schools Chief Portfolio Services Officer John Sullivan was quoted as saying.

Almost 42% of Floridians have received at least one dose, compared with the national average of almost 44%, according to the Bloomberg Vaccine Tracker.

California reported 158 more Covid-19 fatalities on Saturday, a rate of 0.07 deaths per 100,000, the health department’s website said. There were 53 deaths a week ago, with a total of 60,625 overall. The state also reported 2,094 new confirmed cases. The seven-day positive test rate stood at 1.3%. California has administered more than 30.2 million vaccines in total. The state’s population is around 40 million.

Police in Belgium broke up a second huge outdoor party to protest against Covid-19 restrictions, using water cannon and tear gas to break up the crowd, the Associated Press reported. A crowd of several thousand gathered in a park in Brussels, some shouting “Freedom!” around a bonfire. Two dozen people were arrested amid clashes with the police at a similar party in the park on April 1.

New York recorded 25 deaths statewide on Friday, the fewest in 5½ months. The toll, cited by Governor Andrew Cuomo in a statement, matched a number last reached on November 15. More than 15,700 New Yorkers have died of Covid-19 since, increasing the total to almost 42,000, according to state data compiled by Bloomberg.

“The numbers are all trending in the right direction, and as a result we’re able to open the valves on our reopening even more and increase capacity for different industries,” he said. “This is all great news, but now is not the time to let our guard down.”

India has received its first 150,000 doses of Sputnik V, said Deepak Sapra, CEO of API and Services at Dr Reddy’s Laboratories, the Indian drugmaker that has partnered with Russia to supply the vaccine. Further consignments will arrive “in the next few weeks”, Sapra said.

Maryland has now fully vaccinated two million people, or about 35% of the population, Department of Health data show. Total doses are 4.8 million, and the state is vaccinating at a rate above the national average, according to the Bloomberg Vaccine Tracker.

Baltimore on Friday lifted its outdoor mask mandate, except for outdoor venues like concerts or sporting events. The easing applies to everyone, though people who are not yet fully vaccinated are “still strongly encouraged” to wear masks outdoors.

Eighteen patients were killed when a fire swept through a Covid-19 hospital ward in western India, the Associated Press reported. Another 31 people were rescued from the fire in Gujarat state. The cause of the blaze is being investigated.

Kenya lifted restrictions on movement into and out of the capital, Nairobi, and four other counties after Covid-infections dropped.

The limits on moving between the nation’s worst affected areas, imposed in late March, have resulted in a decline of 72% in Covid-19 cases, President Uhuru Kenyatta said in a statement. Other measures to curb the spread of the virus, including restrictions on eating out and a curfew, will also be relaxed.

India’s capital extended by a week curbs it put in place to control a new wave of Covid-19 infections. The lockdown was initially imposed on April 19 and has already been extended once. The city has recorded an average of more than 20,000 new infections daily for the past five days, according to government data.

The estimated share of US hospital beds occupied by Covid-19 patients declined to about 6% last week, the latest sign that vaccinations are helping rein in the pandemic.

New York’s percentage of Covid patients in hospitals has declined since February to the point that it’s now outpacing the drop nationwide, according to US Health and Human Services Department data. Michigan has the biggest share of beds occupied by Covid-19 patients at 16.2%, followed by Maryland at 12.9%.

The indicator has oscillated during the pandemic, peaking at more than 19% nationwide in early January.

US cases continue to slow

The US added 56,274 new cases on Friday, as weekly infections dropped to their lowest level since mid-October, according to data compiled by Johns Hopkins University and Bloomberg. The outbreak continues to slow in most states, though there has been an uptick in pockets of the West, California excluded, data from the US Centers for Disease Control and Prevention show.

Another 728 people died, amid a continuing decline in fatalities. Daily deaths have not exceeded 1,000 since early April.

The Dutch government is postponing the lifting of some lockdown measures originally scheduled on May 11, according to local media citing a Cabinet statement. Zoos, amusement parks and gyms will not open for the time being, with a review of the restrictions expected next week.

Deaths in Delhi for lack of oxygen

While India opened up vaccinations to all adults on Saturday, a Delhi hospital saw at least eight patients dying due to oxygen shortages, according to local media. The deaths show the struggles of the country’s healthcare system amid the growth in coronavirus infections.

Poland saw 6,469 new cases in the 24 hours to Saturday, the lowest number reported on a Saturday since early February, in a sign that the third wave of the pandemic may be easing in the country. Deaths dropped to 423, the fewest for a Saturday in six weeks.

Last week, the government announced it will lift some restrictions later in May. It plans to open hotels, restaurants and shopping malls.

In Germany, the increase of confirmed cases slowed from a day earlier and the incidence rate edged lower for a fifth consecutive day. Confirmed cases rose by 14,326, with another 232 deaths reported, according to the Robert Koch Institute.

Russia reported 9,270 new coronavirus cases on Saturday as the country enters an unplanned holiday through May 10 to slow the spread of Covid-19.

Kremlin spokesman Dimitry Peskov said the expectations are that domestic demand for the coronavirus vaccines is set to increase. However, the Russian vaccination campaign remains plodding amid relatively low official virus data.

Australia will temporarily ban its citizens from returning from India.

The pause on allowing in travellers who were in India within 14 days of arriving will take effect from Monday, Health Minister Greg Hunt said in an emailed statement. Breaches of the ban could lead to a fine of A$66,600 ($51,000), five years imprisonment, or both.

President Joe Biden banned most travel to the US from India beginning on Tuesday as the country struggles to combat the worst surge of coronavirus cases in the world, the White House said.

White House Press Secretary Jen Psaki said that the US Centers for Disease Control and Prevention recommended the travel ban, which won’t apply to US citizens or permanent residents.

“The policy will be implemented in light of extraordinarily high Covid-19 caseloads and multiple variants circulating in the India,” her statement said. DM