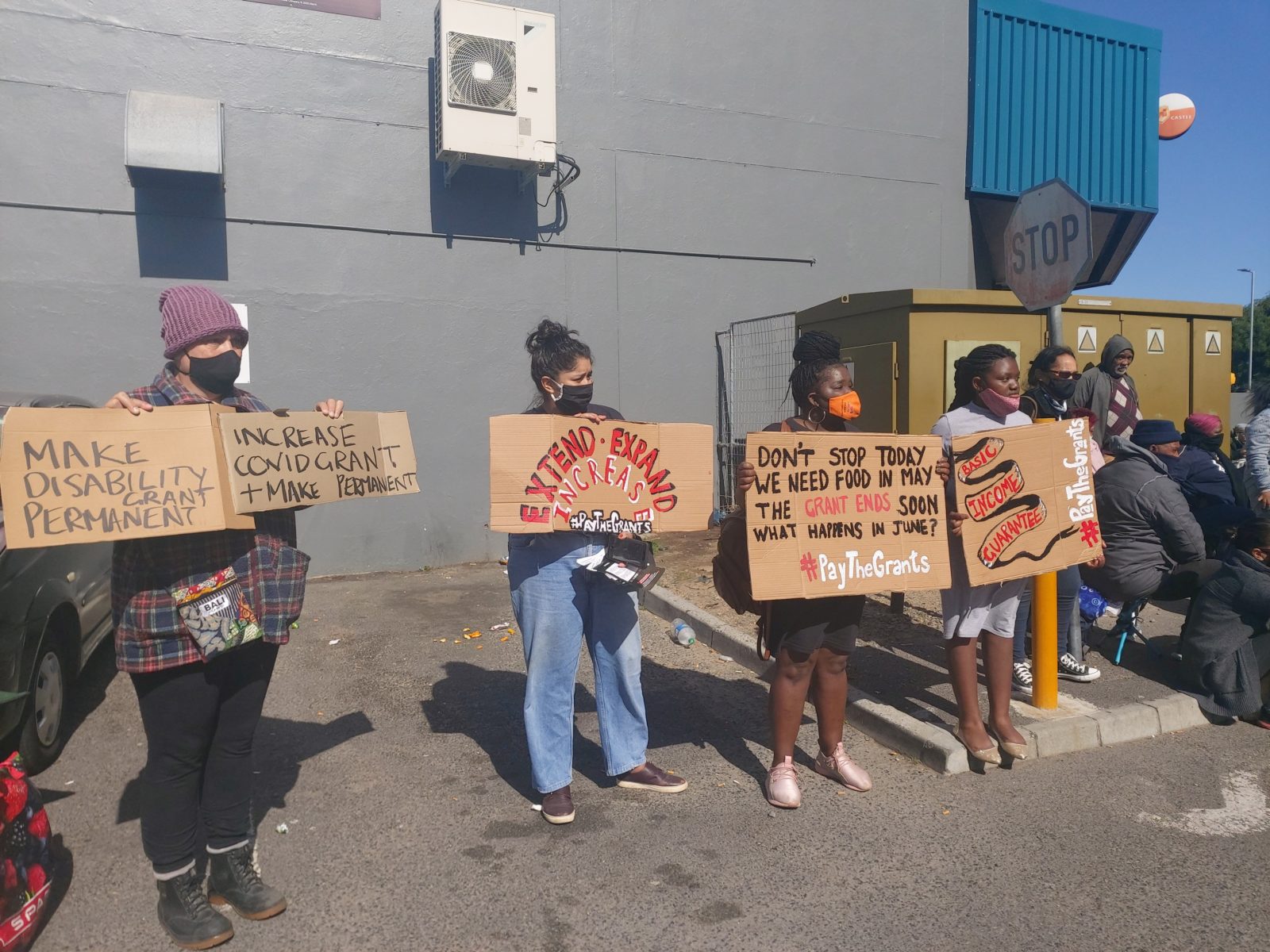 About 20 activists affiliated to the #PayTheGrants campaign picket outside SASSA in Bellville where hundreds of people also queued to collect their disability grants. The R350 Covid-19 Social Relief of Distress grant was terminated today. (Photo: Liezl Human)

‘I do not even have money to go back home if I don’t get paid today. I am hungry’ says desperate beneficiary on final day of Social Relief of Distress grant.

Activists affiliated with the #PayTheGrants campaign picketed outside Post Offices across the country on 30 April, demanding that the R350 Covid-19 Social Relief of Distress grant be extended and increased immediately.

The grant was terminated as of 30 April. This means that no new applications will be processed from Friday.

GroundUp visited Sassa in Bellville in Cape Town, as well as Post Offices in Nigel in Gauteng, Eldorado Park in Johannesburg, and Makhanda in Eastern Cape.

In Bellville, about 20 activists picketed outside the Sassa office, where hundreds of beneficiaries were queuing for their disability grants.

Beneficiary Yvonne Klaasen said that she hasn’t received her disability grant since December, even though she has tried to collect it every month. She was among those not in support of the picket because she claimed that people were “using and abusing” the R350 grant.

Activist Bravo Thompson said that people need the Covid-19 grant for food and to sustain themselves. Thompson explained that the campaign’s main focus is to have a basic income grant introduced. He said they also want Sassa to make it easier for people to apply and receive their grants.

He said that at some Post Offices people queue for hours, only to be turned away when they reach the door.

Jo-Ann Cupido who was part of the picket said that her sons who are unemployed have been receiving the R350 Covid-19 grant. She said that Sassa needs to put an alternative in place for the R350 grant. “Our people really need this R350. But now they put it to an end,” she said.

In Nigel, about 20 people from the C19 Coalition and Right2Know braved the cold and wet weather to protest with placards at the Post Office. A few steps from picketers, was a snaking queue of nearly 200 people waiting to collect their social grants or ask for assistance. Most of the people we spoke to came from Duduza township, Arla Park and Kwathema.

People described waking up early, hoping to receive their money on the last day of the grant payment. Some said they have been owed money for the past six months.

“The queues here are as crazy as ever which shows just how much people need this money. Covid-19 has not ended and the purpose of the grant was to assist people in dire circumstances during the pandemic. How can government stop the grant when people are suffering?” asked Wakhile Tafani, provincial coordinator at Right2Know in Gauteng.

Funny Khumalo from Kwathema, who was in the queue, said he was last paid his R350 in September. He had been visiting different Post Offices, hoping for better luck but to no avail. “What does the government mean when it says the grant is being terminated today when some of us have not been paid for the past six months? As we speak I do not even have money to go back home if I don’t get paid today. I am hungry,” said Khumalo.

By midday, there was a commotion outside with a group of people trying to push their way to the front of the line. Only 110 tickets to enter were given out on Friday.

In Eldorado Park Extension 5, dozens of beneficiaries arrived at the Post Office to find a notice which stated that the Covid-19 grant could not be paid on Friday. According to an employee, this was because the grant money had not been delivered to the Post Office since last Friday. The notice read that those who were notified to collect their grants should return from 10 May.

Derrick Scheffers, a beneficiary who had come to collect his grant said, “I didn’t get my money for two months and I don’t have money for taxi fare to go to another Post Office. I can’t do anything until I get the money.”

At the Primrose Post Office, people outside also said they were concerned that they would not get paid today because the Post Office was only helping 100 people for the day. This is due to the limited amount of cash the Post Office gets each day.

Tebogo Moruane, who is unemployed, said she was yet to receive the grant after she first applied for it last year. “I tried again this year and it was approved in March but I haven’t received it yet,” she said.

In Makhanda, Eastern Cape residents were turned away from Post Offices and were told that their grants would only be paid from 10 May. Fuziwe Mtati said she arrived at the Joza Post Office at 6am. “The queue was already long when I arrived. I live alone in a transit camp and I’m unemployed. I’m disappointed because I thought I could buy groceries,” said Mtati.

Xoliswa Lolwana from Extension 9 said she asked her daughter to accompany her at 5am. “It was raining but since there was nothing in our cupboards we woke up,” said Lolwana.

Eastern Cape Sassa spokesperson Luzuko Qina said if there are any R350 grants beneficiaries that have not yet been paid, the money will still be available after the first three days of ordinary payment dates. “Recipients of this Special Covid-19 grant are requested to wait for SMS notifications as to when they should go to Post Offices to collect their money,” said Qina.

According to a Sassa statement on Thursday, beneficiaries whose applications were declined between February and April 2021 can lodge an appeal. The appeals process will be open until 31 May 2021. DM