Ace keeps fighting for a little more room to manoeuvre 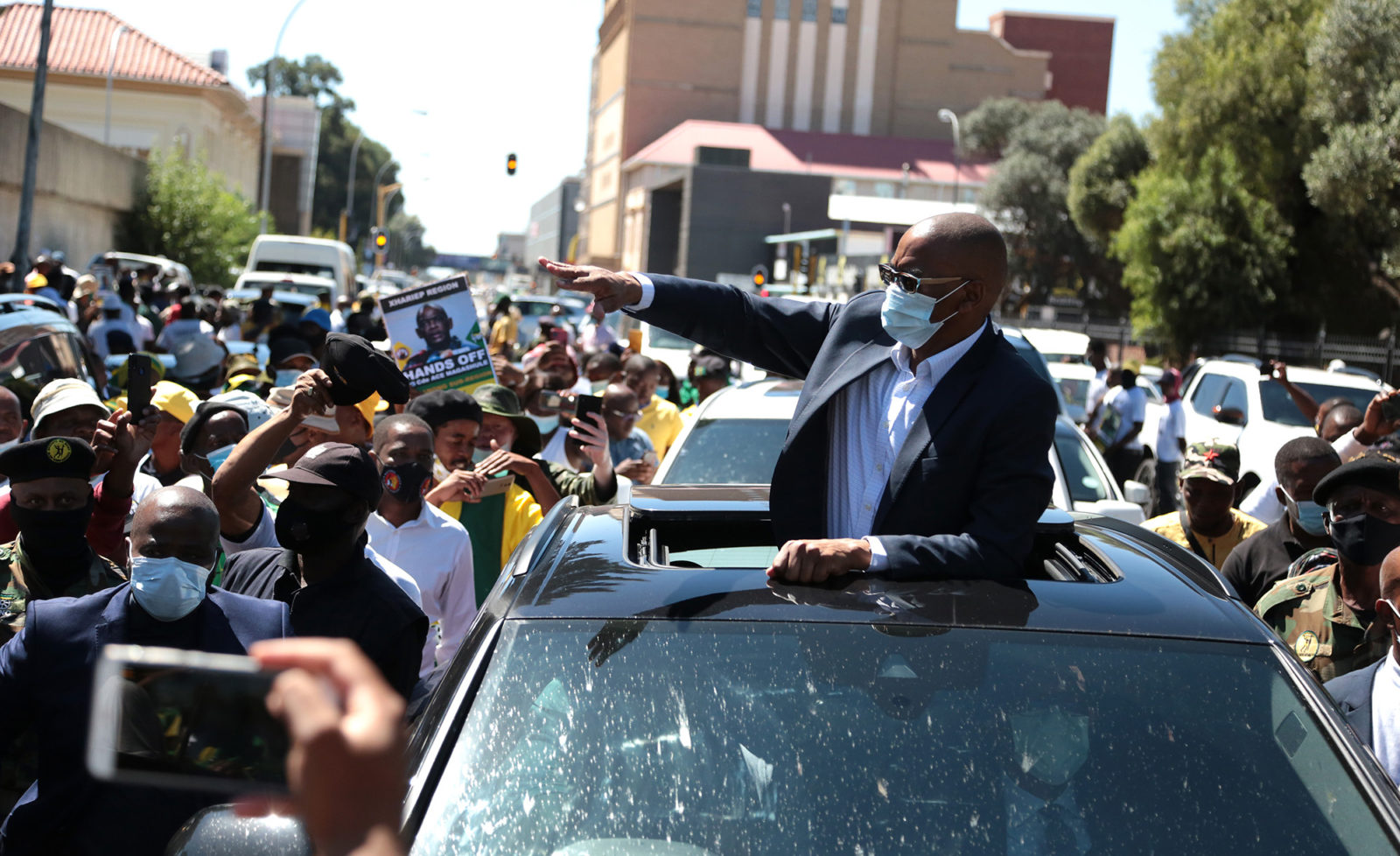 Ace Magashule driving through the streets of Bloemfontein waving at his supporters through after his appearance at the Bloemfontein magistrate court on charges of corruption and money laundering with co-accused.Photo:Felix Dlangamandla

Backed by one Free State branch, Magashule could appeal to the NEC.

The next seven days will be crucial for the ANC as it decides the future of various leaders charged with corruption, including Secretary-General Ace Magashule.

This weekend the ANC’s Top Six officials are meeting to consider submissions from provincial structures as to which party members should step aside from their positions.

The 30-day window period for Magashule and other corruption-accused ANC leaders to step aside expired on Thursday, 29 April.

Speaking to Newzroom Afrika on Friday morning, ANC Treasurer-General Paul Mashatile said the governing party would hold a special national executive committee (NEC) meeting on 8 May to deal with the submissions on the step-aside guidelines.

Asked if the party expected Magashule to step aside, Mashatile said: “We expect all our members to abide by the rules of the ANC. The deadline [for the accused to step aside] has arrived and so the officials will meet as early as this weekend and receive reports from all provinces and process them in time for [the] NEC [meeting] next week.”

Magashule has told his close associates that he will not voluntarily step down from his position. He still has some room to wriggle out of an immediate suspension, because the guidelines adopted by the ANC on the “step-aside” resolution allow him to appeal to the NEC – which he is expected to do next weekend.

This will kick into motion a process in which a smaller ad hoc committee will be appointed to consider Magashule’s appeal and make a determination as to whether the initial decision that he must step aside should hold.

It is unlikely that the ad hoc committee will make a different finding, given the serious charges of fraud and corruption faced by Magashule.

He is out on R200,000 bail in connection with the R230-million asbestos case in the Free State, where he was premier.

But the appeal is part of a political game being played by Magashule to bide his time and consider all the options available to him.

The Free State’s Fezile Dabi region, where Magashule hails from, has expectedly thrown its weight behind him, threatening to interdict the ANC NEC if it forges ahead with the implementation of the step-aside resolution. This is understood to be the Magashule grouping’s strategy to buy him more time.

An ANC NEC member said the interdict is the only thing that could stop the party from suspending Magashule.

“Magashule has already been to the Integrity Commission and their recommendation [that he should step aside] is already there. The only thing he can do now is appeal to the NEC.

“What is practical for them is to go to court and interdict. That threat by Fezile Dabi could work in terms of the delay,” said the NEC member.

But the ANC in the Mangaung region has distanced itself from Fezile Dabi. The deputy convenor of the Mangaung region, Sabelo Pitso, told the media on Thursday that every ANC member should subject themselves to the discipline of the party.

“True cadres of and members of the ANC always voluntarily subject themselves to organisational discipline. This is exactly what Thabo Mbeki and Jacob Zuma did in the past, irrespective of personal wishes and preferences. Once the NEC took a decision to recall them, they never sought to influence the gullible branches to cause confusion, disability and disorder,” Pitso was quoted by the SABC as saying.

The Magashule grouping disrupted the last NEC meeting in March when they were unhappy with the initial seven-day period that Magashule was given to step aside.

They are expected to do the same next weekend, with some in the ANC suggesting that the party should reinstate physical meetings to deal with disruptions and also the leaking of audio from sensitive meetings.

The same NEC member said: “They will howl, we expect that. But we will have to plan around it.

“It’s possible that the meeting may be physical or [hybrid], because the last meeting of the Top Six was a physical meeting.”

This weekend’s meeting of the Top Six officials, which Magashule is expected to attend, will be followed on Monday by one of the ANC’s national working committee (NWC) meetings. It is at this meeting that the provincial submissions of those who are supposed to step aside will be considered. The NWC will then make recommendations to the NEC, which will deal with the step-aside report on 8 May.

On Friday, Mashatile said the ANC’s provincial structures had complied with the NEC’s decision that they should submit names of members facing corruption charges, bar a “few voices here and there”.

Now that the NEC had adopted the guidelines, he said, there was no turning back.

“If there is an allegation [of wrongdoing] you should go to the Integrity Commission [to explain yourself], but if you’re charged [with corruption] then you should step aside.

“Step aside is not a punitive measure… You’re asked to step aside to clear your name,” said Mashatile.

Writing in the Daily Maverick on 27 April, ANC NEC member Mondli Gungubele summed up the sentiment of those opposed to Magashule’s defiance of the congress resolution: “A cadre – which is what every ANC member claims to be – does not have to be pressured into doing what will strengthen their movement. They understand the importance of ensuring their organisation stays focused on fulfilling radical socioeconomic transformation imperatives instead of deliberating on personal interests.

“Recent recorded leakages of ANC leadership meetings being a case in point, where critical questions about moving South Africa forward seemed to have taken a back seat. All because of resistance to activate action that will assist a process aimed at addressing what the ANC calls ‘sins of incumbency’ – which is malfeasance that has arisen due to personal choices,” wrote Gungubele.

The waning power of Magashule’s grouping was evident on Wednesday when President Cyril Ramaphosa addressed Freedom Day celebrations in Botshabelo, Free State – Magashule’s heartland – without there being any incidents of pushback against him by Magashule supporters.

During a lunch break at the State Capture Commission of Inquiry on Wednesday afternoon, ANC leaders posed for a “family photo” as they flanked President Cyril Ramaphosa. Four of the Top Six members were in attendance as Ramaphosa gave evidence in his capacity as ANC president. Conspicuous by his absence was Magashule.

Also absent was deputy president David Mabuza, although it’s unclear why he did not attend the commission to support his boss.

But the message was clear – Ramaphosa has the support of his colleagues in the Top Six and the NEC. DM168