Distillery sails close to the wind 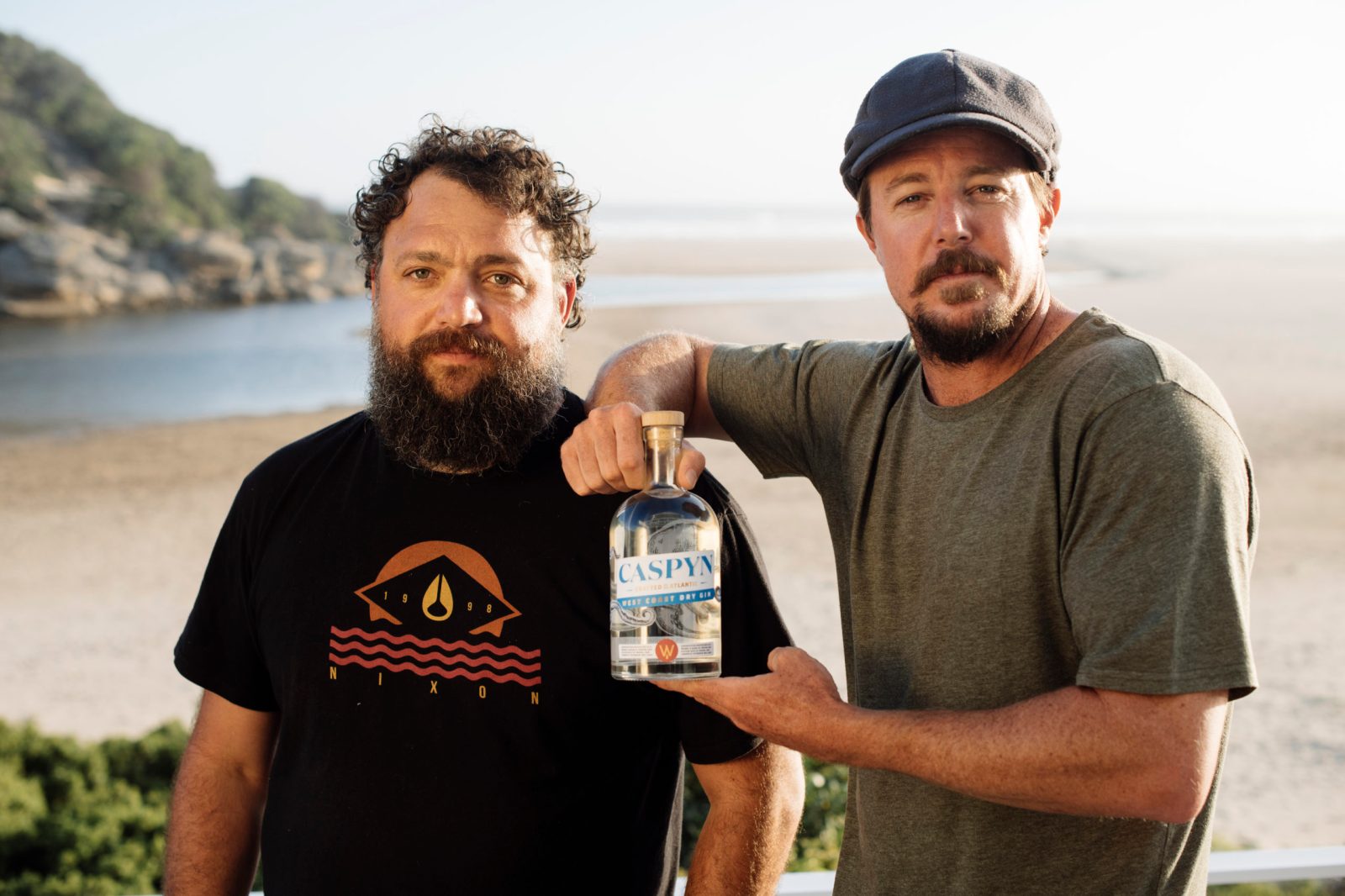 How West Coast Distillers did what it took to keep their business afloat, pre and post-Covid.

When professional sailor Shane Smith flew over to London in early 2016 to go to a wedding along with long-time mate Shaun Bebington, he had no idea he’d come back with a business plan for a distillery. And when Smith had finally navigated all the red tape to obtain their Micro Liquor Manufacturing Licence – at the end of 2017 – he had no idea their young business would almost immediately be sunk with the onslaught of Covid-19 and its associated alcohol bans.

“I think if somebody had told me you’re going to start a business that’s going to be forcefully shut down four times within its first three years … you might think twice,” laughed Smith when I went to visit him at West Coast Distillers.

It’s situated, as you’d imagine, on South Africa’s West Coast, in the windswept town of Langebaan. Here Smith owns a yachting academy called Sail Due South, which he opened after spending a decade sailing the seven seas himself.

Meanwhile Bebington, originally a Durbanite, had opened a pub in London before setting up Pocketful of Stones distillery in Cornwall, where he’s based.

When the wedding was cancelled at the eleventh hour – quite literally while Smith was mid-air, en route from Cape Town – they decided to pop over to Croatia instead. It was on this four-hour flight, while catching up over several G&Ts, that they tipsily decided to launch a sister distillery to Pocketful of Stones together.

“That was the birth of West Coast Distillers, and it’s been just as crazy a ride since then,” said Smith.

Smith had a lot to learn, but the delay in obtaining the license gave Bebington a chance to teach him the ropes, and of course for them to build the distillery itself – a small-scale operation, with just a 40-litre copper still called Naughty Forty in which they redistill neutral cane spirit.

“I didn’t know the first thing about distilling when I started this. I knew absolutely nothing,” admitted Smith.

They started off with something familiar, by releasing Caspyn West Coast Dry Gin, a cousin to the Caspyn Cornish Dry Gin that Bebington distils in Cornwall. It’s infused with 12 botanicals, including locally foraged rooibos, honeybush and pelargonium citronellum, and its bottle is adorned with a dramatic West Coast octopus.

Next, they created Mutiny Bitters, which come in Aromatic, Spiced Orange and Rooibos variants, each made by blending individually infused botanicals then pressing them in wine presses, by hand.

Both were well received in the market, with Caspyn getting a gold medal at the 2019 SA Craft Gin Awards followed by a double gold in 2020. Mutiny was awarded not only gold at the 2019 Michelangelo International Wine & Spirits Awards, but was also bestowed the Most Innovative Spirit Trophy.

Around the same time, they released the second collaborative product with the distillery across the pond: the Caspyn Summer Cup – a gin liqueur inspired by the cocktail made famous by Pimm’s No. 1, which proved especially popular at festivals, served in a punch.

It wasn’t all smooth sailing though.

When making the bitters, it was only after purchasing the bottling machine that Smith realised it didn’t fit the 100ml bottles, so he had to fill them by hand. “I was literally lining up bottles on the table with a jug and a 100ml measurer, for days,” he chuckles.

That first batch was 1,600 bottles, while the next one will be 9,000, and the labels are also affixed by hand.

The next bit of troubled waters for this plucky startup emerged even before Covid hit, when the team was taken with the idea of making a nightshade gin.

Nightshade, of course, has a fascinating history, famed for its use in poisons and potions since the Renaissance period.

“The deadly nightshade that grows in Europe is exactly that: it’s deadly. It’s killed kings and commoners alike through history, it really is a very dangerous plant. In South Africa we have the black nightshade berries, fortunately perfectly safe and palatable. They’re called ‘nastergal’ in Afrikaans – you might know them from nastergal jam, that bright purple jam. They’re family of the deadly nightshade, and we play on that stigma.”

It’s apt then, perhaps, that a gin with a link to such a notorious plant would cause some turmoil.

“There were many times where we felt like we should have given up, or we almost had to give up,” recalls Smith. Somehow we managed to get to the end.”

At first, Smith and Bebington played around with the jam, just to get an idea of how it would work in a gin. They then found some berries in the Cape, but they had problems with oxygenisation, which affected the colour.

After much investigating, the pair learnt there was only one farm where the berries are grown and harvested correctly, and that was in Mpumalanga, on the other side of the country. After chatting to the farmer about their idea, he was willing to send down 25kg of the berries for them to experiment with.

“They’re extremely fragile, so they had to be frozen solid and then trucked down. I picked them up in Cape Town, and drove fast and reckless back here so they didn’t defrost, and quickly popped them in the freezer,” explained Smith.

While the distillers were busy with product development, the farmer called to say a hailstorm had wiped out his entire crop. He was, however, willing to share some of his frozen stores, which he was going to use for jam.

Relieved, Smith and Bebington continued working. They eventually got the infusion right and were ready to order their first 250kg of the berries and distil in earnest … only to be told that the plague that is load shedding had struck at the farm. The freezer’s compressor had bust, and the farmer had lost every single berry.

“I literally get goosebumps thinking about it. I just sat on the floor. We’d gone all-in; we’d bought thousands of bottles. Labels. Design. For a little place like this, it’s bloody expensive to launch a product. But I had a drink, pulled myself together, and went back to the drawing board,” said Smith.

Smith only had the original sample berries to work with, so he made them stretch by halving the infusion and releasing a limited edition of around 1,400 bottles of what they named Belladonna Night Shade Gin. Luckily, they flew off the shelves, injecting much-needed cash back into the fledgling business.

Belladonna’s popularity is not only because of the novelty factor of the nightshade, but because the gin vividly changes colour when it’s mixed with tonic – it doesn’t dilute the deep purple to light purple as you’d expect, rather the deep purple becomes an electric pink.

“It’s a natural reaction between the PH value of the berries and the gin itself and the acidity of the tonic. If you add light tonic or lemonade it’s not going to do the same thing, but if you shake up a cocktail with freshly squeezed lemon, it explodes even more,” Smith clarifies.

And then just as they’d got back on the right tack, Covid blew in. During the first alcohol ban, there wasn’t much to do except batten down the hatches. Soon though, Smith and Bebington knew they’d have to sail close to the wind if they didn’t want to be dead in the water.

They decided to take their chances and produce two new products, both affordable options, cutting out any expensive design and packaging. The resulting No Frills Gin and Tronk Voël Vodka are both tongue-in-cheek, the latter playing off the jailbird feeling of being locked down.

Smith offers guided tastings at the distillery every Saturday when you can hear all about their ups and downs first hand, and of course sample the range. Bebington travels between the West Coast Distillery and Cornwall. DM/TGIFood