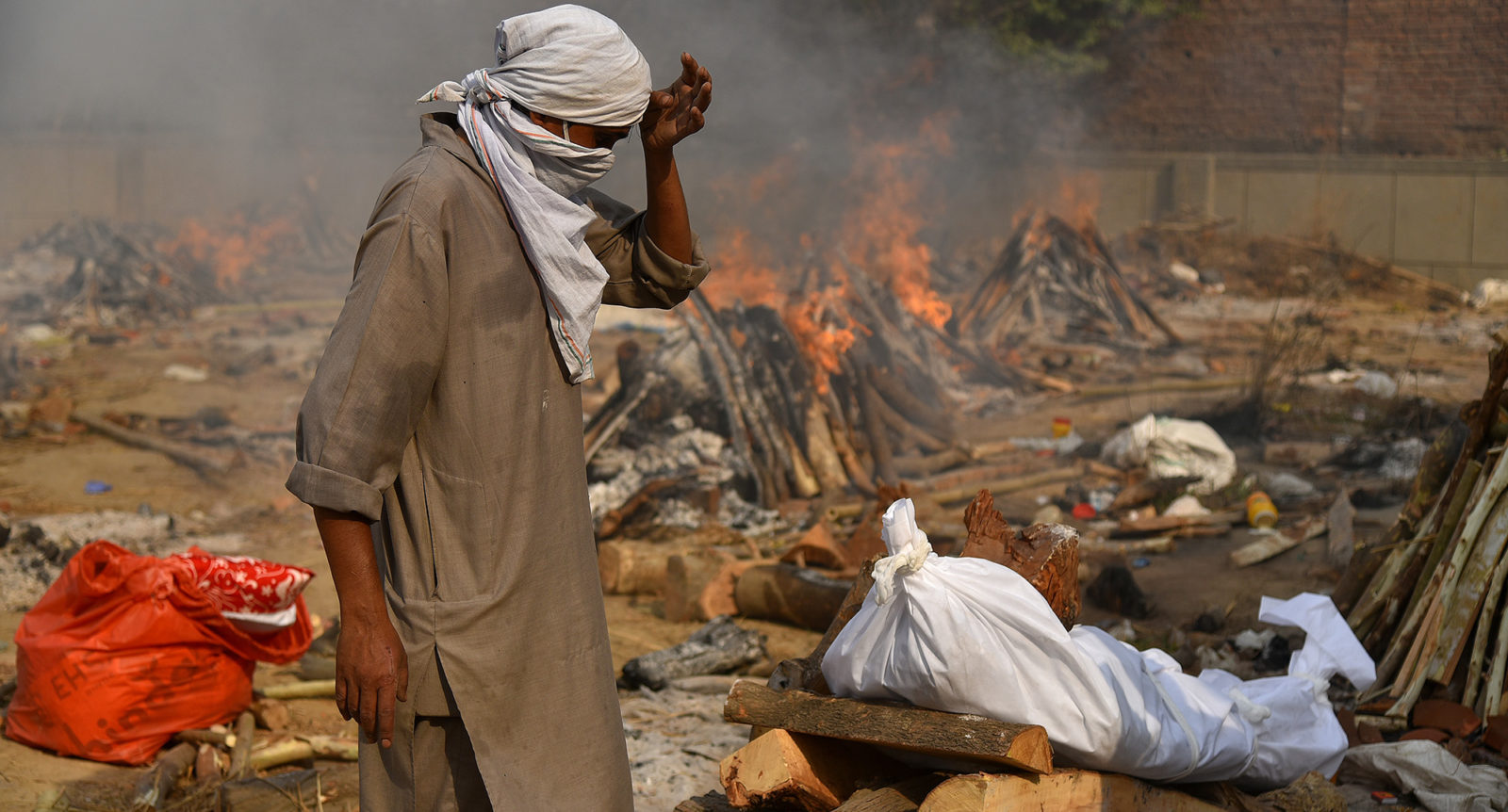 Relatives perform the last rites for Covid-19 victims during their funeral at a cremation ground in New Delhi, India, on 29 April 2021. (Photo: EPA-EFE / IDREES MOHAMMED)

The spike in India’s Covid-19 infections and deaths is a “wake-up call that we have to act now, collectively and decisively, to avoid that happening to us”, said Dr John Nkengasong, director of the Africa Centres for Disease Control and Prevention.

He said he was watching developments in India “with total disbelief and awe”, noting how the country had gone from the low level of 3,000 new infections daily in March to about 350,000 now.

“It’s very concerning to us. It speaks to the fact that Africa must be very careful. We must be prepared so that the same scenario doesn’t occur here,” he said at the Africa CDC’s weekly briefing on Thursday.

The mandate would be to “regroup urgently and get ourselves prepared” to avoid a vertical surge in Covid infections and deaths like India was experiencing.

The meeting would also “put everyone on alert that we can’t be indifferent to what is happening in India and which could happen anywhere”.

Nkengasong noted that India and Africa were similar in many ways. They had about the same populations (1,3 billion) and both had fragile health systems. India was actually better off, with a better health system than Africa’s (on average) and was also manufacturing Covid-19 vaccines at scale.

So it would be “catastrophic” for Africa’s health systems to try to bear the impact of a huge surge like India was experiencing. “We don’t have enough oxygen, beds, vaccines or health workers to deal with such a massive attack,” he said.

“The proper use of a mask is equivalent to a vaccine,” Nkengasong said, urging African governments to subsidise their populations to ensure they could acquire masks.

He added that the surge in India had also severely impacted Africa’s vaccine roll-out, as the Africa CDC had entered a verbal agreement with India’s Serum Institute in January to provide 600 million to 700 million doses of the two-shot AstraZeneca vaccine through Covax – the global NGO providing vaccines to low- and middle-income countries.

However, the Serum Institute had reneged on the agreement because of the surge in demand for vaccines for its own people, and Nkengasong said he could not see India exporting vaccines while its own needs were so dire. He said it would be weeks or even months before it could do so.

Nkengasong said Africa faced a vaccine shortage until the start of the third quarter when Johnson & Johnson is contracted to start delivering an initial batch of 220 million doses of its one-shot vaccine, with an option for another 180 million doses.

Nkengasong said the vaccine situation was dire, but that the Africa CDC was doing all it could to address it and he would be meeting Covax on Friday to seek further solutions.

He said the Africa CDC was in discussion with all pharmaceutical manufacturers around the world but had so far signed a contract only with Johnson & Johnson – which is to supply the Africa CDC through its South African manufacturing partner, Aspen.

He also said the Africa CDC was waiting to hear if the World Health Organization approved the two Chinese vaccines, SinoPharm and SinoVac, and the Russian vaccine Sputnik V, before considering the purchase of any of those. But he made it clear that Africa’s hopes rested largely on the Johnson & Johnson vaccine.

The DRC decided that it would be unable to administer all of the vaccines before they expired. This was partly due to vaccine hesitancy, Nkengasong said, adding that he believed as the vaccines proved their efficacy across the continent, more and more people would want to be vaccinated.

It also appears that DRC lacked the logistical infrastructure to administer all of the vaccines.

Meanwhile, the Indian author Arundhati Roy has blasted India’s populist and nationalist prime minister Narendra Modi for his “arrogance” and “complacency” in the handling of the Covid-19 pandemic.

She recalled how, at the World Economic Forum (WEF) in January this year when Europe and the US were suffering the peaks of the second wave, “he had not one word of sympathy to offer, only a long, gloating boast about India’s infrastructure and Covid-preparedness”.

Roy wrote in the Guardian that Modi had told the WEF: “Friends, I have brought the message of confidence, positivity and hope from 1.3 billion Indians amid these times of apprehension… It was predicted that India would be the most affected country from corona all over the world. It was said that there would be a tsunami of corona infections in India, somebody said 700-800 million Indians would get infected while others said two million Indians would die.”

“Friends, it would not be advisable to judge India’s success with that of another country. In a country which is home to 18% of the world population, that country has saved humanity from a big disaster by containing corona effectively,” said Modi.

Now Covid-19 was out of control because of Modi’s handling of it, Roy said. “The system hasn’t collapsed. The government has failed. Perhaps ‘failed’ is an inaccurate word, because what we are witnessing is not criminal negligence, but an outright crime against humanity.” DM