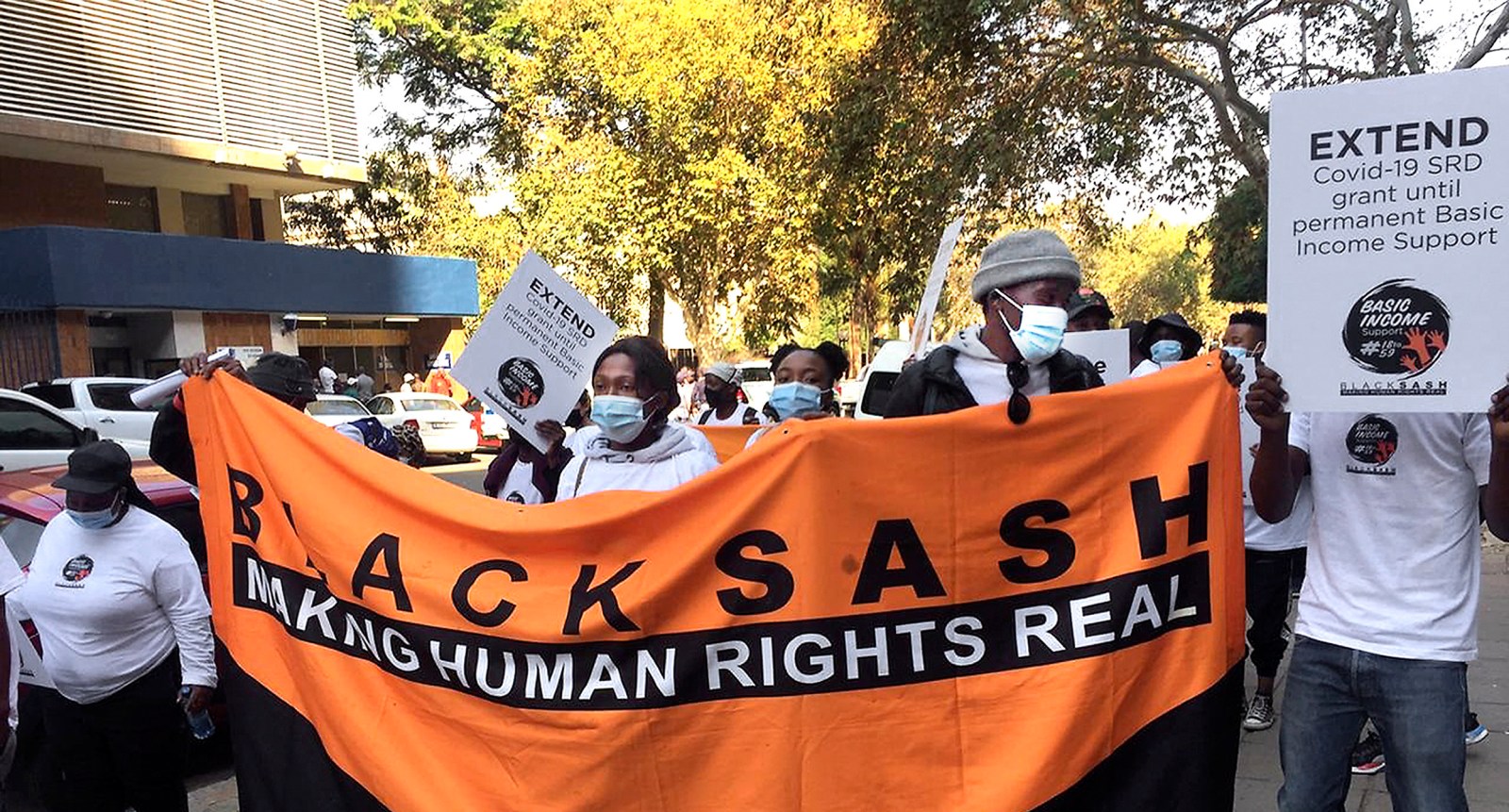 Members of the #PayTheGrant and the Black Sash campaign picket outside of the Department of Social Development office in Pretoria on 22 April to demand an increase, expansion and extension of the Covid-19 Social Relief of Distress grant. (Photo: Kgothatso Sibanda)

After months of asking for talks, civil society organisations arrived on the eve of the end of the Covid-19 Social Relief of Distress grant with no indication from the government if and when it would extend, increase and expand this grant. The R350 has been described as a ‘lifeline’ to six million people in South Africa. Civil society is preparing to take this fight further.

Civil society organisations have been petitioning the national government to extend, increase and expand the Covid-19 Social Relief of Distress grant since January 2021. The grant has benefited six million people. However, this “lifeline” will be severed on Friday, 30 April 2021.

The R350 grant is paid to South African citizens, permanent residents and refugees registered with the Department of Home Affairs. They must be older than 18, unemployed and receive no other form of social grant or UIF payment.

The Black Sash and the #PayTheGrants campaign have been at the forefront of calls to extend the grant. They have specifically called on President Cyril Ramaphosa, Finance Minister Tito Mboweni and Minister of Social Development Lindiwe Zulu to use their offices to keep the grant in place until a Basic Income Grant is secured.

On Wednesday, the morning before the grant was due to end, the organisations held a joint media conference to repeat their demands. They were joined by:

The organisations, 250 in total, voiced their support for the demands of the campaign:

These calls have been made since January 2021. The #PayTheGrants campaign has requested a meeting with the national government three times since to discuss its concerns and demands.

Treasury and the Department of Social Development are yet to provide them with reasons why the R350 grant will be terminated, said Shaeera Kalla, co-ordinator of the #PayTheGrants campaign.

The Department of Social Development was meant to publish a policy proposal on a basic income grant in February 2021, but this has not materialised, said Kalla.

An hour before the media conference began, it was reported that Zulu had said that she had asked the Treasury to “extend” the grant.

Despite several attempts, Maverick Citizen was unable to verify this with the minister’s office.

Kalla said it was the “height of arrogance” and disrespect for the ministry to make such a statement a day before the grant was due to end. She said the responsibility was being shifted between the Treasury and social development with no indication of what would happen.

The grant may come to an end tomorrow, but the organisations have committed to continue their fight.

On 2 April, they handed an open letter to the department of social development listing their demands. It was endorsed by 86 organisations. They received a response on 28 April, saying only that the department had received the letter and would plan a meeting for the future.

On Freedom Day, the #PayTheGrants campaign held protests around the country to voice these demands and to protest against increasing food prices. During these protests, the #PayTheGrants team sensed the anger and concern communities felt about the grant coming to an end, said General Alfred Moyo, Gauteng coordinator of the campaign.

Some people were not even aware that the grant was coming to an end, which showed the government’s lack of communication and accountability, said Moyo.

He said protestors would gather at Sassa offices and post offices around the country on 30 April at 11am to demand an increase, extension and expansion of the grant.

Moyo warned that if they were ignored, the local elections would be used as a way to force the government to listen to the voices of the poor. 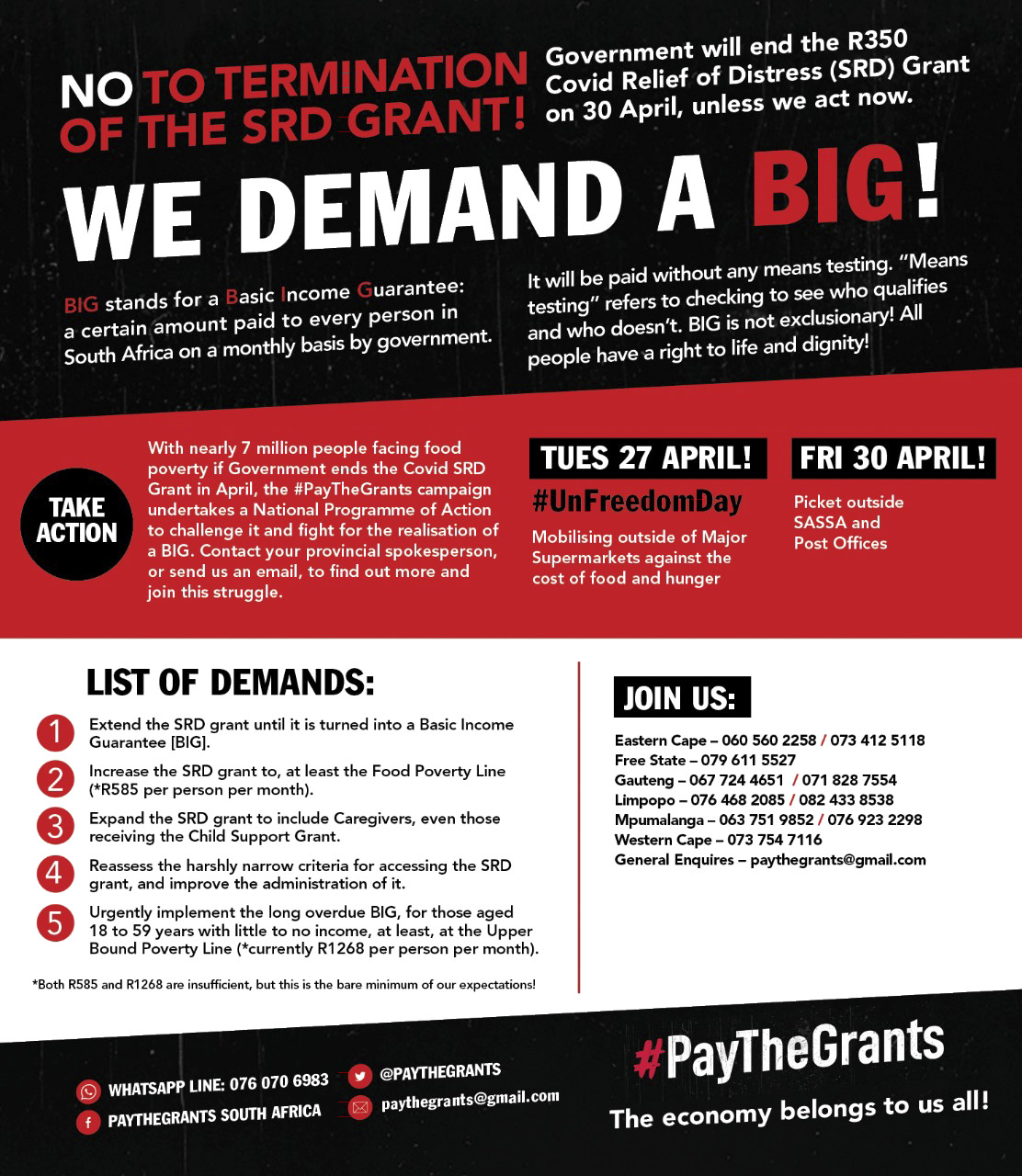 In addition, they have been circulating a petition to gather support for their demands. More than 36,329 people had signed the petition within two weeks of its launch. This petition will be handed over to the Office of the President at the Union Buildings on Thursday at 11am.

In the weeks to come, the organisations will honour an invitation to meet with the government to discuss their demands, said Lynette Maart, national director of the Black Sash.

South Africa is a signatory to the United Nations’ International Covenant on Economic, Social and Cultural Rights, but failed to deliver a report on its progress towards the covenant’s goals in October 2020, said Maart. The organisations will work through the international committee to apply pressure on the government to respond.

The organisations remain open to engaging and meeting with the government to move forward with these issues, said Hoodah Abrahams-Fayker, national advocacy manager for the Black Sash. She said little light had been shed on “how government will respond to the humanitarian crisis… government needs to urgently provide a lifeline”. DM/MC