‘America is on the move again’, Biden says in first address to Congress 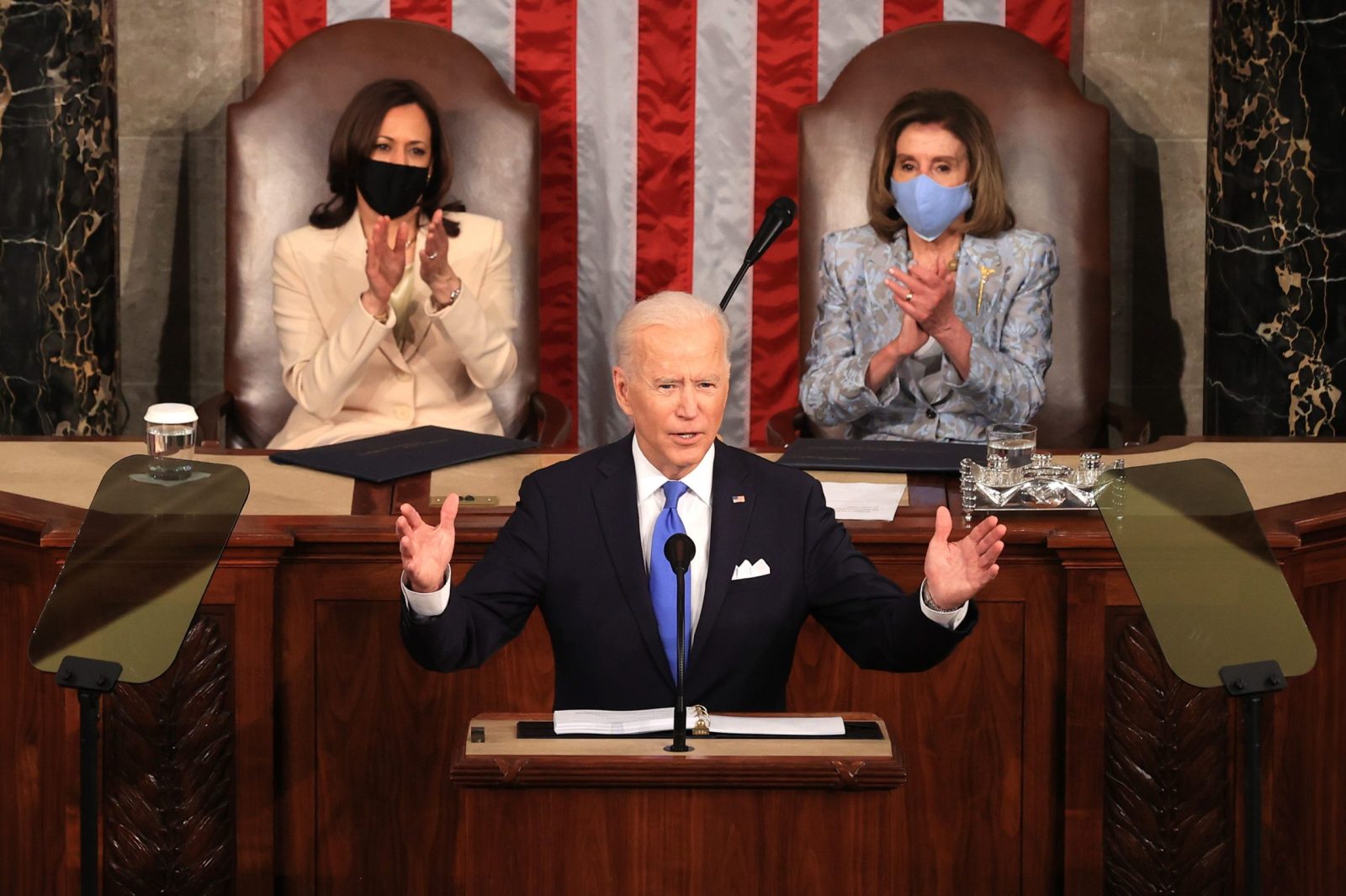 Joe Biden speaks during a joint session of Congress at the U.S. Capitol on April 28.

‘100 days ago, America’s house was on fire,’ Biden tells Congress, while speaking of the success rate of Covid-19 vaccinations after having more than doubled the 100-million-shots-in-100 days goal, as well as getting more stimulus money out to struggling Americans. Biden focussed on his successes in his first 100 days but he still has promises to keep.

Dubbed “Slow Joe” by former US president Donald Trump, Biden has been anything but slow in dealing with the Coronavirus pandemic and gets his highest ratings from Americans for that. Despite opposition by the GOP, he needs to speed up in other areas.

Speaking to Congress and the American nation in his first Congressional address as US president on Wednesday, April 28, Biden started with his most well known and successfully realised promises — getting the country vaccinated and getting stimulus money into the hands of average Americans.

As he opened he reminded everyone that they were witnessing a historic  moment with regards to the representation of women in positions of power in the US government:

He said he came “to talk about crisis and opportunity, about rebuilding the nation, revitalising our democracy and winning the future for America”.

“After just 100 days, I can report to the nation, America is on the move again… We all know life can knock us down, but in America we never ever, ever stay down. Americans always get up… choosing hope over fear… After 100 days of rescue and renewal, America is ready for a takeoff in my view.”

The president spoke of the numbers of Americans vaccinated, reminding everyone that he had surpassed his goal of 100 million shots in 100 days by over 100%: “…we will have provided over 220 million Covid shots in those 100 days.”

Only 200 masked lawmakers were in physical attendance for the address due to strict social distancing pandemic protocols, which also prohibited gallery attendees.

After 99 days in office, the president made some inroads with regards to education, healthcare, unemployment benefits, immigration reform and taxing the rich.

Biden spoke of the American jobs plan to create jobs that would see the replacement of “pipes with lead in them including drinking water. A clear and present danger to our children’s health. American jobs plan creates jobs replacing 100% of the nation’s lead pipes… so every American can drink clean water and in the process, we will create thousands and thousands of good-paying jobs.”

He also spoke of getting high-speed internet to the entire country, “including 35% of rural America that still doesn’t have it… and I’m asking the Vice President to lead this effort…”

Less affluent countries may be interested to note that while broadly speaking, most Americans have constant uninterrupted access to the internet the US is also battling with internet access in rural areas.

US political analysts criticise Biden for not going far enough on the climate crisis, immigration and police reform. A national police oversight commission was dropped earlier this month in favour of directing those efforts into getting the George Floyd Justice in Policing Act passed. If passed into legislature the George Floyd bill would ban chokeholds and be the end of qualified immunity for law enforcement – meaning more police accountability.

The bill had been approved in the House of Representatives in the first week of March, but has yet to be voted on by the Senate. The bill would also see the creation of a national police misconduct registry.

The US president also highlighted that he felt a good way to work toward solving the climate crises would be through jobs.

“For me. I think climate change — I think jobs. The American jobs plan will put engineers and construction workers to work building more energy-efficient buildings and homes… installing 500,000 charging stations along our highways so we can own the electric car market. Farmers planting cover crops so they can reduce the carbon dioxide in the air and get paid for doing it.”

He also made a strong pitch for buying American products, saying “American tax dollars are going to be used to buy American products, made in America, to create American jobs. That’s the way it’s supposed to be and it will be in this administration.”

In a clear call to the American ‘everyman’ and a specific nod to the unions, Biden also pointed out that the eight-year American jobs plan created mainly non-degree jobs.

But while he may be building up more support among marginalised and working-class voters – he was seen having chats with Maxine Waters and  Bernie Sanders, among others, on the House floor immediately after his speech – Biden is also seen as being soft on concrete measures around what can be done to unify Americans.

The US seemed at its most divided as a nation during the Trump presidency with a clear split between MAGA followers (self-declared patriots) and basically the rest of the country. But what could then have been called, in an admittedly overly simplistic political sense, a Republican/Democrat fault line in American society, did not go away with the changing of the guard.

Divisions have not receded as was hoped, but seem to be emerging more strongly than ever and focussing around issues of identity and race.

Biden has been noted for speaking the language and words of unity and inclusivity, reaching out to people of colour and native Americans at every opportunity. He regularly uses the term “states, tribes and territories” to leave no doubt that first nation peoples of America are also ‘American’.

Republicans on Thursday night reacted to president Biden’s address with polite, even studied, disdain, making no bones about what they thought of Biden’s “blue-collar blueprint to build America.” At some points during the speech, some Republicans in the House were seen with their eyes closed – ostensibly asleep.

Scott also touched on issues of discrimination, saying he knows “what it feels like to be pulled over for no reason, to be followed around a store while I’m shopping.”

Scott stopped short of calling Biden a hypocrite for urging for the passing of the George Floyd bill, when Biden in his speech said:

“Let’s get it done next month, by the first anniversary of George Floyd’s death.”

Scott said that after the deaths of Breanna Taylor and George Floyd he had put forward a “ … police reform proposal but my democratic colleagues blocked it.” He did not mention that the Democrats had blocked the bill because they said it did not go far enough to address racial inequality.

Republicans only seemed to applaud once in the House during Biden’s address — his commitment to a strong military presence in the pacific.

Biden last night also said that Vice President Kamala Harris would be dealing with the border crisis, which has the potential to be her Achilles heel. Political analysts say this is a critical test for Harris with more scathing reports saying that it could end any presidential prospects she may have.

While that may be a somewhat OTT opinion, Harris is certainly having all of her diplomacy and negotiating skill sets tested to find a solution to a situation that sees some 6,000 people crossing the US southern borders daily to escape their home countries.

Harris is trying to negotiate relationships between the US and Central American countries which are already under strain, whilst simultaneously trying to avert a humanitarian crisis. DM