Jazz musician Retsi Pule: Ballad for all the Sad Young Men who Jazz’d Discovered ‘The Voice’ 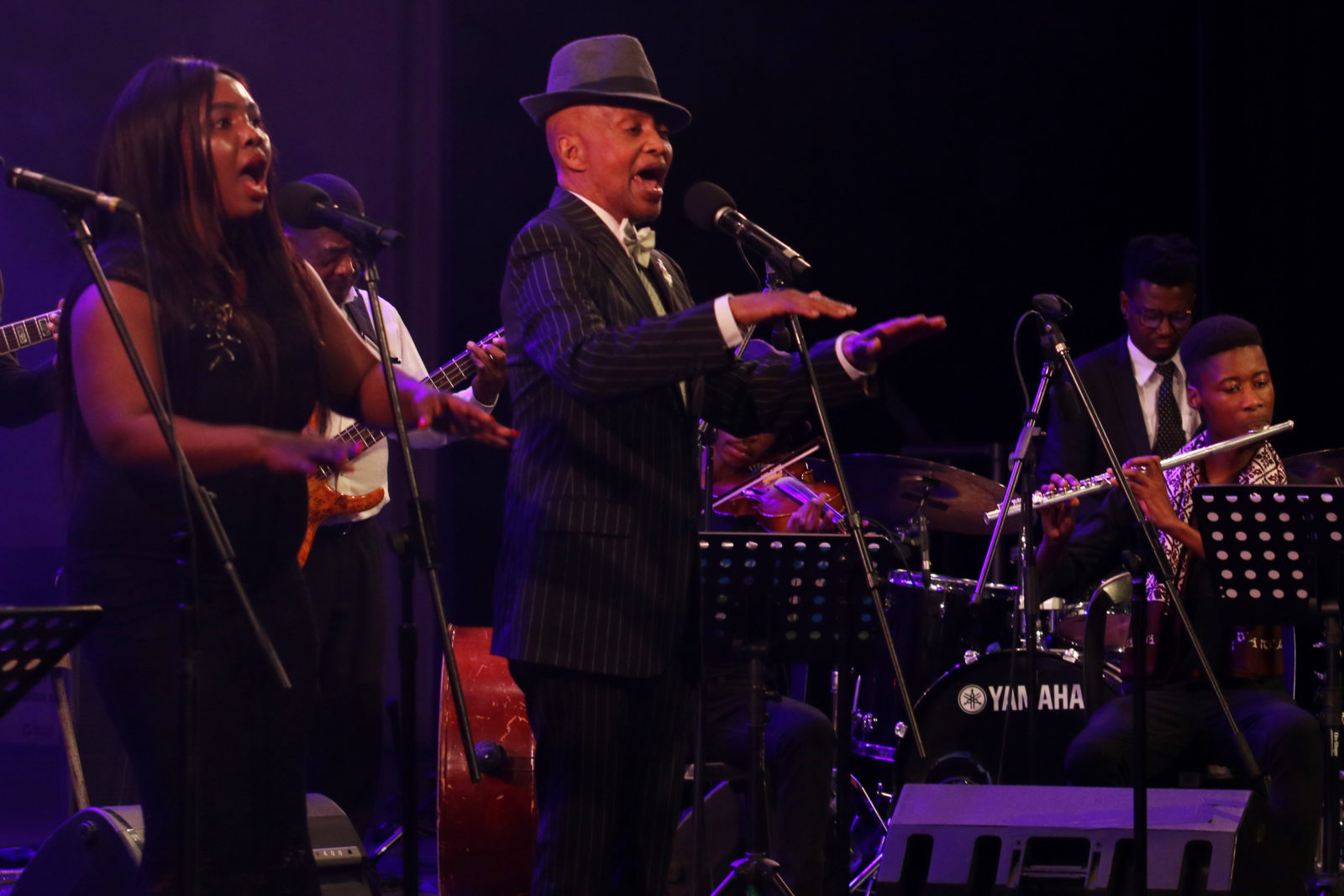 Retsi Pule, a legendary jazz vocalist and composer who started his career at the Anglican Church choir as a kid, got his break after being invited by Pianist Pat Matshikiza in 1963 at the age of 23; seen here performing at the East London Guild Theatre. Image: Supplied

Retsi Pule is an outlandish yet calming, beautiful soul, even before he opens his mouth. It instantly knocked me sideways to realise that this cat has a huge heart and bigger artistic ambitions.

Tautology, even seemingly mindless repetition, for those of us who grew up on the hot streets of Marabastad, Temba/Mazakhele, GaMampyane, Munsieville, Orlando, Mdantsane, Duncan Village, Dube Village, Red Location, Langa, or what do you know? Elsies, and waar vat my nou? Vlakfontein, etc, has never been a matter of grammatical malfunction. “Repetition, and cyclical expressive codes are an intrinsic core of the backbeat to our sacred, bitter, if often lilting Blues.

So when you heard someone’s greetings, Ek se, wat se? And the response, Es (is) Double Dolly, you jazz knew there’s music in the air.

My generation, sui generis, would sing back the answer to the wellbeing greetings with: “Es Tjovitjo, mei Outie.”

Different ends of the chain of sounds of Black Folks.

Thus when asked: How is Ou’ Retsi Pule, back in my hunting streets of Mjipa, you know which song I will sing back: Ou’ Retsi es Singali. Hy’s tussen, Hy’s  mojo. Full of beans after all these years.

Retsi Pule is an outlandishly, yet calming beautiful soul, even before he opens his mouth.

First time I saw Uncle Retsi Pule, who shall henceforth be referred to as “Bra Retsi” or “The Voice”, at a rehearsal at Lulama Gaulana’s joint, “Kwa-2” in Mdantsane, East London, I secretly prayed the hat would tip over his head and roll over.

For why should he hold it together like that?

Great voice, timeless fashion, blessed age, looks to arouse envy in men and women. But, by design, trilby, or even pork-pie hats, don’t roll, they strike a pose. Just like Bra Retsi Pule.

Looking at him all suited up and shit, like he be Cab Calloway, I remember thinking: Frank Sinatra meets Jimmy Scott in the body and soul of an Eastern Cape pickpocket specialist.

I shouldn’t have worried.

Retsi Pule is an outlandishly, yet calming beautiful soul. It instantly knocked me sideways to realise that this cat whose music I am still grappling with, a result of a late introduction to his body of work, has a huge heart and bigger artistic ambitions: See how he conducts the numerous versions of bands he’s played with – big-band formations and tight and taut quartets – just by his body movement.

His heart is belied by his adventurous yet taut, and taunting, vocal chops.              A man rooted in the global black male crooning and scatting tradition that harks back to Paul Robeson, taking a turn at and with Nat King Cole, sweeping in and riding the Southern breeze with Alan Silinga, Dambuza Mdledle, Joe Mogotsi, Victor Ndlazilwana, and reached its contemporary mountain top with the careless beauty of Wings Segale.

I’m personally drawn to black female vocalists and white metal-hair rock boys with daddy issues, but boy oh boy, how could you not be spellbound in silence, stand attentive, when Retsi Pule sings? He is definitely part of the Black Atlantic, Indian Oceanic for him, tradition. No doubt about it.

Someone was heard just the other day grumbling because he loved Retsi’s vocal stylings too much: “Yeah, okay, but he’s not the same old himself when he used to send shivers down our spines with that voice of his.” Which, of course, evoked a lovely joke I once heard slung between the balletic boxer Muhammad Ali and his beloved critic, broadcaster Howard Cosell.

Retsi grew up in the axis of African optimism of the Cape Colony and its attendant German and Anglo Liberal Settler cultural milieu.

The exchange took place in those tense months leading to Ali’s still insane decision to rumble with “Giant George” Foreman in the “Rumble In the Jungle”.

Quipped Cosell: “But Champ, someone said you are just not the fighter you used to be after all these years.”

To which Howard finally admitted: “Oi, okay, you got me there… yeah, man, time’s gone. I don’t see how you are the Ali of our dreams anymore. You are just not the boxer you used to be.”

Without skipping a beat Ali jabbed back before hammering, sledge-like, a solid one above the groin: “But Howard, I spoke to your wife just the other day and she says you are just not the same man you used to be… you know where.”

And that is the story of Retsi Pule. His discography is slim indeed. Born in King William’s Town, maternal grandson of Paul Xiniwe, the storied “New Afrikan” modernist, teacher, journalist at Imvo Zaba Ntsundu, chorister, the first African to build and run a hotel which was the gathering hole of early 1900s Black movers and shakers, the “Colony’s” Savoy, if you will, Retsi grew up in the axis of African optimism of the Cape Colony and its attendant German and Anglo Liberal Settler cultural milieu.

He arrived in Johannesburg in 1968 to a scene still under the spell of African revues such as King Kong, Sponono and Manana the Jazz Prophet and a new township soul music.

“It was a mind trip. I had been playing with the Soul Jazzmen. But things were expanding. There was Vicky Mhlongo with her hit, Lollipop, Winston Mankunku Ngozi was well on his John Coltrane horn blowing, Kippie Moeketsi was still indispensable, and American funk and Motown were definitely part of our cultural fabric,” he recalls as we drive past the Esperance Hotel his grandfather ran in King William’s Town, now ran over with buck wild Pakistani and Chinese cheap garment shops, and drinking holes.

“No one is who they used to be an hour ago.”

Ten years later he had a hit recording, Sdudla, but by then disco and the Jackson Five had taken over the airwaves. The 1980s saw him back in the Eastern Cape, Mdantsane, East London, specifically. The 1980s simply swallowed him and although he gigged around, he basically disappeared from the national stage.

Today you’d be forgiven for uttering “oh wee, that Retsi Pule is still cute as a lilac, for his age. But he is certainly not the vocalist he ‘used to be’ in the halcyon 1960s.”

True. But per Muhammad Ali: No one is who they used to be an hour ago. He is actually more refined, like a century-old whisky. Contemplative of pace, at home within the strengths and limitations of his voice. He is far mellower, far more daring, far freer, too free baby: The timbre and range of his full-throttle disavows musical categorisation.

The songs are delivered with beautiful inbuilt harmony, and now, more than ever, “Bra Retsi” finds himself in lockstep with the Kings and Queens of Balladry. Which is rare for one outlandishly devoted to his looks. You’d have thought his personal style curation would snatch something away from his gifts, depth, and self-critique, maybe. But instead it adds a bit of sunshine, a beam of day-glo, and flickering danger. The exterior adds an edge to his musical package.

I still have not acquainted myself properly with his discography, his oeuvre as it were, but I will never forget the phrasing, the enunciation, the dramatic caressing of vowels, the bellowing voice issuing out of the bony, slim body like his very life hangs on it.

You’ll have to excuse my impertinence when I say: If those 1950s Kofifi  gangsters could have songs sung for them, hell, why not me? Which brings me to Uncle Abdullah, ja, daai Dollar, the piano genius whose talent no one can truly afford.

It was the summer of 2013 back when I was holed up in a hotel in Gardens, Cape of no Good Dope, when I received his call from Munchen, Bavaria, or wherever he had unretired to in Germany:

That’s another story, but Sensei Abdullah’s words couldn’t have sounded more pertinent than this rainy, silky Friday in East London: I am not leaving till Retsi Pule sings a Song For Me.

Retsi Pule is who he is, and who yo mama and her girlfriends want him to be. In their dreams. DM/ML

Bongani Madondo is an international cultural troubadour, always in search of a good yarn. He is also an author of several books and co-maker of several films. The reason he is in the Eastern Cape could only be because he is, yet again, in love with another woman: Most possibly a long-dead one.