Farfalle, Penne, Tagliatelle: Discover the science, history and philosophy behind pasta dishes from all over Italy 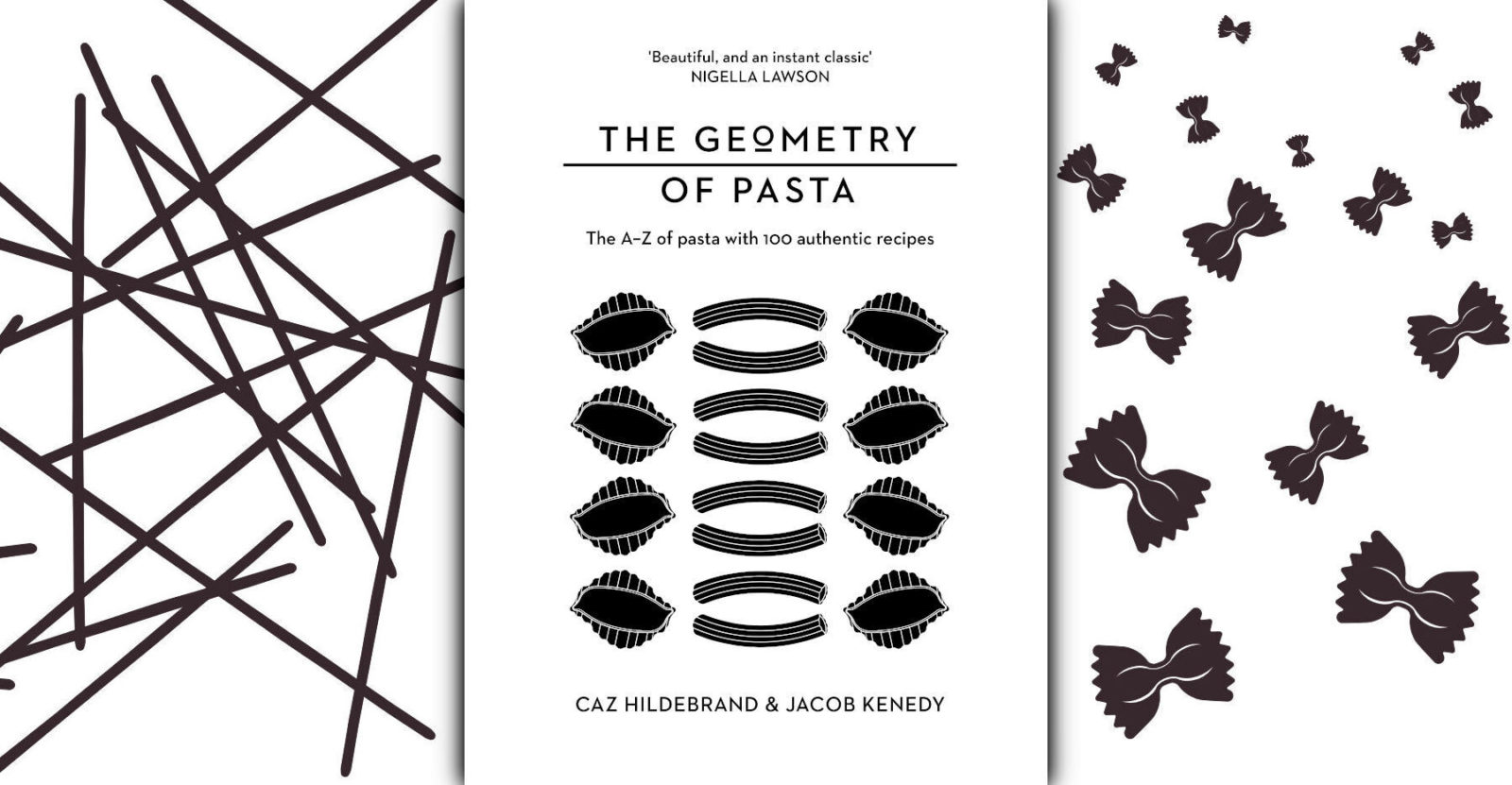 A stylish combination of design and food, The Geometry of Pasta explains why certain pasta shapes suit specific sauces.

There are said to be over 300 shapes of pasta, each of which has a history and a story to tell.

These shapes have evolved alongside the flavours of local ingredients, and the perfect combination can turn an ordinary dish into something sublime.

Try these three recipes to taste for yourself.

Farfalle, (“butterflies”) are sometimes known as “bow-tie” pasta outside of Italy. They are one of the simplest shapes formed by manipulating a sheet of pasta. Rectangles, normally cut with frilly ends as though by pinking shears, are pinched across the middle to make a bow shape.

A variation, farfalle tonde (‘fat butterflies’), are made from an oval or disc of pasta rather than a rectangle. These hold more sauce but are less economical to make. The dough may be made of simple semolina, or flour and egg – the former being perhaps better suited to greens, the latter to mushrooms, meat and cream sauces – but the choice is ultimately the cook’s.

In general, more artisanal producers who command higher prices may choose to use an egg dough, whilst more industrial producers use the cheaper semola. Their form, inspired by the natural world, is one of a family of pastas including cocciolette (‘sea-snails’), conchiglie (‘shells’), lumache (‘snails’), coralli (‘coral’), and vermicelli (‘worms’). The pinched middle of farfalle helps keep them al dente when cooked, and catches a little sauce. They are often dressed with light vegetable sauces as a summer pasta, to eat outside when the butterflies are in full swing.

Slice the salmon into strips about 5mm wide. Cut the asparagus in 3cm lengths, discarding the tough stalk end.

When the farfalle are a couple of minutes from being ready, add the asparagus to the boiling pot. In a smaller pan bring the cream and butter to a simmer, seasoned with nutmeg and black pepper (but no salt). Add a little ladleful of the pasta water as necessary. When the pasta is just on the firm side of al dente, drain and add to the sauce. Toss together and cook until well coated by the cream. At the last minute (and off the heat), stir in the salmon and your herb of choice. Season to taste.

Penne are probably the best-known tubular pasta. They are hollow cylinders, the length about five times the breadth, and the ends cut at an angle like the quills from which they take their name. They can be smooth (lisce) or ridged (rigate), the ridged ones being slightly sturdier, and holding more sauce. As the quill or pen nib draws ink from an ink-well, so the slanted ends of the pasta draw up sauce. The angled cut makes a larger open surface area for sauce to fall into, and the shape encourages the sauce to work its way into the pasta as it is turned by the spoon.

Penne should not be confused with Italian ziti, but they often are. In the States, as documented in The Sopranos, a dish of baked pasta is popular amongst Italian Americans. Referred to as ‘baked ziti’, it is in fact made from either the much shorter penne (ziti are traditionally broken into four pieces before cooking, each not much longer than penne), or American ‘ziti’ – tubular pasta like smooth rigatoni.

Fry the garlic in the olive oil for a few moments until cooked, but not yet coloured. Add the chili flakes followed by the tomatoes and ½ teaspoon salt. Boil fairly briskly until the sauce has a little body (you will see the bubbles get a bit bigger) but is by no measure thick. The tomatoes should taste fresh, but no longer raw. Season with more salt to taste, remove from the heat and stir in the basil.

Boil the penne until marginally undercooked. Drain, transfer to a frying pan and add 300ml of the spicy tomato sauce along with a splash of the cooking water. Cook together until the sauce coats. Best served without cheese in my opinion, rather a drizzle of oil. Some would disagree (they should use Pecorino Romano, but given their dubious taste are probably sprinkling Parmesan).

“Short bills and long tagliatelle, say the people of Bologna, knowing whereof they speak, for long bills frighten husbands, while short tagliatelle are proof of the inexperience of she who made them, and, when served, look like leftovers.” – Pellegrino Artusi

Tagliatelle comes from tagliare, ‘to cut’. As with almost all ribbon pastas, these are made by rolling up a sheet of thinly rolled egg pasta dough like a roll of cloth, then cutting it across to make ribbons, curled like party streamers which can be fluffed up and laid out to dry a little. As ribbon pastas are so simple to make, and tagliatelle are of a medium size, they can be found across Italy. Their heartland, however, is Emilia-Romagna and especially Bologna, where they are de rigueur with ragù Bolognese. They were reputedly invented there by the Bolognese maestro, Zefirano – personal chef to Giovanni II de Bentivoglio, to mark the marriage of Lucrezia Borgia to Alfonso I d’Este, Duke of Ferrara. Where the other signature pasta of Bologna (tortellini) was modelled on the bride’s navel, these were inspired by her blonde, silky hair. The pasta was supposedly so thin the Basilica di San Luca could be seen through it, via the cook’s window. Both stories are likely to hold as much water as a colander, but are romantic nonetheless.

Tagliatelle production is still an art-form in a few shops and restaurants in Bologna, the fresh dough being hand-rolled on pins 1.5m metres long. As said, they are available throughout the rest of Italy. Regional variations crop up in the north, such as in Lombardy where bardele coi morai are tagliatelle made with borage. And in Alto Adige and Friuli-Venezia Giulia, on the day of slaughter some of the fresh pig’s blood is mixed into the pasta dough itself, and the resultant pasta served with kale. Further south, in Abruzzo and Molise, tagliatelle are cooked in milk – a reminder of times when lean days (when meat was abstained from) were not limited to Lent, but comprised 150 of the days in each year.

Although normally eaten asciutte (“dry”, i.e. with sauce), they can also be served in brodo (broth).

This sauce is a million miles from the ‘Bol’ that we Brits like to serve with pasta, which is about as close to the real McCoy as our chile con carne is to a true version. It is orange, not red; it is more oil- than water-based, it is delicate, aromatic, creamy and subtle. This is one of many recipes where the cooking technique is so much more important to the finished dish than the ingredients – buy best-quality pancetta and Parmesan, spend as much money as you can afford on the eggs and flour for your pasta (or the packaged tagliatelle), and the few pennies remaining on the other ingredients. There are words to describe how good this is, but they shouldn’t appear in print…

It is worth having a butcher mince the meats coarsely (8mm), for the improved texture. Peel and dice the carrot, dice the celery, chop the onion and slice the garlic. Take a very wide frying pan (30cm), and melt the butter in the oil over a medium heat. Add the vegetables and pancetta along with a good pinch of salt and sauté for 10–15 minutes until softened. Increase the heat to high and add the meat in four or five additions, allowing time for any water to evaporate, stirring and breaking up any lumps with a spoon. After the last addition, wait until the pan starts to splutter slightly, then decrease the heat to medium and fry, stirring occasionally, until the meat has browned with a fair proportion of crispy bits – about 15–20 minutes. Deglaze with the wine, then transfer to a saucepan along with the milk, tomatoes and stock as well as a good grinding of pepper and more salt to taste. Cook at a very gentle simmer, uncovered, for about 4 hours until the sauce is thick, more oil- than water-based (add a little stock or water if it dries too much or too quickly). When ready, the liquor will be as thick as double cream and, stirred up, the whole should be somewhat porridgy. Adjust the seasoning one last time.

The addition of bay and/or dried chilli flakes along with the meat is heretical, but not displeasing. This recipe yields 1.75 litres, enough for 800–900g pasta; use 400ml for 200g dried or 260g fresh tagliatelle.

Heat the ragù in a frying pan with a little pasta water. Drain the boiled pasta when marginally undercooked, then add to the sauce to finish cooking for about 20 seconds, with knobs of butter. Serve with grated Parmesan on top. DM/ ML

Jacob Kenedy is the co-owner of Bocca di Lupo, recently voted London’s best restaurant by both Time Out and the Evening Standard. Caz Hildebrand is well known as the designer of sumptuous bestselling cookbooks by Nigella Lawson and Sam and Sam Clark of Moro. The Geometry of Pasta is published by Pan Macmillan (R499). Visit The Reading List for South African book news – including recipes! – daily.