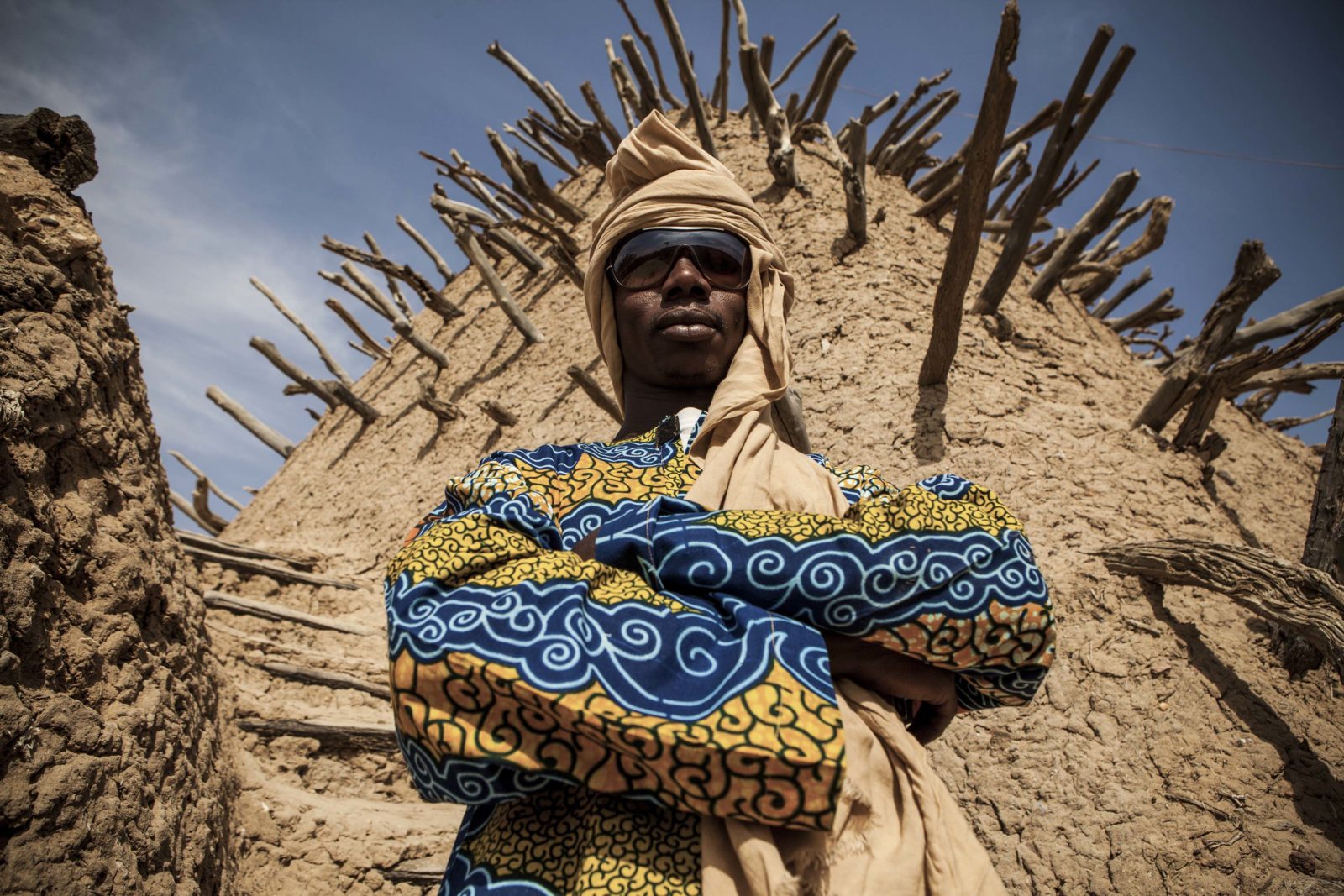 4 March 2013: Malian hip-hop artist Pheno S outside the Askia Mosque in his hometown of Gao. (Photograph by Salym Fayad)

Through DIY technology and a futuristic use of cellphones that is particular to Africa, the Sahel Sounds label has released roughly 60 albums in the past 10 years.

Sahel Sounds is a portal into alternate realities. The small independent label has made music from the greater West African Sahel region accessible over the past decade, including from remote desert areas in Mali, Niger and Mauritania.

“I want the label to be a way of de-exoticising things, through the process of learning about the music,” Kirkley says. “So, when you hear Hama and you find out he’s a chauffeur who got a keyboard from a friend and he started making music on Fruity Loops [production software] … you start to form an image of what it is to be a person in Niamey growing up in the 2000s … I want the work to be an invitation to learn about something.”

Kirkley’s journey began in 2009, when he travelled to Mauritania in search of guitar music, a type of pentatonic blues in particular, commonly referred to as desert blues. “I had a guitar and a digital field recorder and went there travelling around, meeting musicians and recording, with the intention to share music online.”

He soon started a blog, documenting what he heard, “because often, I’ve found music is a doorway into learning about a culture”. The project lived as a blog for some years and Kirkley ended up spending two years travelling around the region, recording and learning about the music and culture. He learnt French while in Mauritania and picked up various other languages.

“While I was doing the recording, it became really apparent that the cellphone was such a prominent actor in that transaction,” says Kirkley. When he sat down with an artist, children nearby would pull out their cellphones and do the same. Contrary to Western notions, music from the region has been digitised at a high rate because of the use of cellphones.

“I became really curious about the content of phones. Like, if you could peer into that network of phones and look at what people were listening to, what type of field recordings could you find?”

Kirkley says these particular cellphones were iPhone knock-offs. “One of the cool features they had was this bluetooth file transfer.” Bluetooth music transfers became a common pastime during his travels because phones in the region were not usually connected to the internet, Kirkley explains, so the only way to get a song was to stand next to someone.

“What emerged from that is a sort of metaphoric internet, this network of file-sharing that wasn’t dictated by the internet, it was dictated by physical people travelling. Someone getting a song in one city, then getting on a bus and travelling to a different city, meeting with friends and sharing that.”

The most popular songs were metaphorically viral hits, on cellphones in Gao, Bamako or even Lagos. “They were the same songs, often unattributed, and no one knew who they were by. They were these mystery mp3s that had spread through this network,” he says.

“In Africa in general, the cellphone was the first digital device. And in the US, it was desktop computers and laptops, and then it was the miniaturisation of a laptop into a cellphone. I think that people in Africa embrace the cellphone in this variety of ways, with a lot more openness than people in the US have been able to. So the way that people are using technology in Africa has always been more futuristic. Really, anywhere in the world that’s not Europe or the US.”

A natural archivist, Kirkley collected everything from mp3 files to video and graphics, trading with people along the way.

Back in Portland, Kirkley created a mixtape compilation of some of the music he’d discovered. It got significant attention online and he realised he could do more with it, if he could identify the tracks and artists to license their songs.

“It was hugely difficult at the time to track down the artists. Part of the process was using online resources, and travelling back to the region, playing the song for people and seeing if they could identify something.”

Kirkley tells the story of how he tracked down Tuareg guitarist Mdou Moctar via a taxi driver from Niger, who identified the dialect of Tamasheq on the song.

Sahel Sounds released the compilation Music from Saharan Cellphones in 2011. The album was an extension of the original mixtape, compiled from songs off cellphones in the Sahel region. It was the birth of the label.

Now, a decade later, Kirkley has released roughly 60 albums from the region, travelling regularly to record artists. Many of the recordings were done on location and with minimal technology, using a single microphone. “The idea was to capture a live sound as I was experiencing it, because a lot of the music is so performative in there. It exists as live and performed music,” he says.

These releases have broadened the ears of many music fans globally.

The platform has also produced a few films. One is loosely inspired by Prince’s Purple Rain. The film follows Moctar as he navigates the streets of Agadez in Niger on his motorbike. Released in 2015, its beautiful name, Akounak Tedalat Taha Tazoughai, translates to “rain the color of blue with a little red in it”. In Tamasheq, there is no equivalent for the English word “purple”.

“The film was just an extension of what I feel the real passion of the label is for me, which is acknowledging that there’s cross-cultural communication going on. It was a really interesting way of creating art collaboratively, but with the intention that it could also reach shared audiences.” It is one of the few films in Tamasheq that exist.

The political conflict in northern Mali since 2012 has displaced many artists, who are now living in exile and refugee camps. These include artists on the Sahel Sounds label, among them Tuareg blues guitarist Ahmed Ag Kaedi, who was forced to leave the region of Kidal.

Kirkley notes the difference 10 years has made. “It’s so much easier now to find people than it was 10 years ago.” Previously, it would take him months to track down a musician. Now, it happens within days.

DIY production exists throughout Africa and making music on free software such as Fruity Loops has become the norm. One of the biggest technological shifts in Africa is the ubiquity of WhatsApp, a cheap and easy mode of communication. The label released a monthly series last year, called Music from Saharan WhatsApp, as a way to support artists from the region during the pandemic.

“We don’t always utilise technology to its fullest potential,” says Kirkley, who was drawn to WhatsApp for its ability to record and transmit immediately.

He put out an open call to musicians from the region. The idea was to have artists record a few songs on their cellphones and send them via WhatsApp. The tracks were then uploaded to Bandcamp for one month only, available as a “name your price” download. Because it was a low-cost process, the money raised could be transferred directly to the artists.

“It ended up being a really interesting project, where we were able to get all kinds of different artists to perform for a large range of sound. People donated a lot of money.”

Kirkley also launched a 24-hour channel briefly last year via live streaming platform Twitch, which he ran from his house, broadcasting hard-to-find material from his archive. He views the visual material as essential in affirming Sahel Sounds’ role in connecting people and demystifying stereotypes.

Kirkley says Sahel-based artists are often excluded from music distribution platforms. “A lot of the online music avenues are not feasible platforms for some artists in West Africa, who don’t have Paypal accounts … All these distribution platforms are great, but they are created by Westerners with Westerners in mind. There’s a severe disadvantage for anybody remotely located.”

In terms of the ethics behind running the label as an outsider promoting African music, he says, “I’ve always been really uncomfortable with my role, because I exist within a legacy of colonialism, just by virtue of who I am and where I’m working. The question about how to do this ethically is always at the forefront of my mind.”

For Kirkley, considerations include whether the deal is fair, splitting everything 50/50 with the artist and thinking deeply about representation. “The other side of it is portraying the music and the image, and the role of what you are selling. Right down to how you are titling a record, how are you talking about it. What does the cover look like? What narratives are you pushing into the world that not only is the West, but becomes the predominant resource that people around the world access.”

As the label celebrates 10 years in sound, it now looks to the future. Sahel Sounds just released a new album by Les Filles De Illighadad and it has a Music From Saharan WhatsApp compilation in the pipeline. Kirkley is also trying to put together another volume of Music from Saharan Cellphones compilation to mark the label’s 10-year anniversary and to include many tracks whose artists could not originally be found. In all this work, the label and Kirkley continue to centre the idea of music as a way to connect: across, through and as a doorway into culture. DM/ML