Reflections of a Wayward Boy: Skulking through the Thames estuary guided by naked canoeists 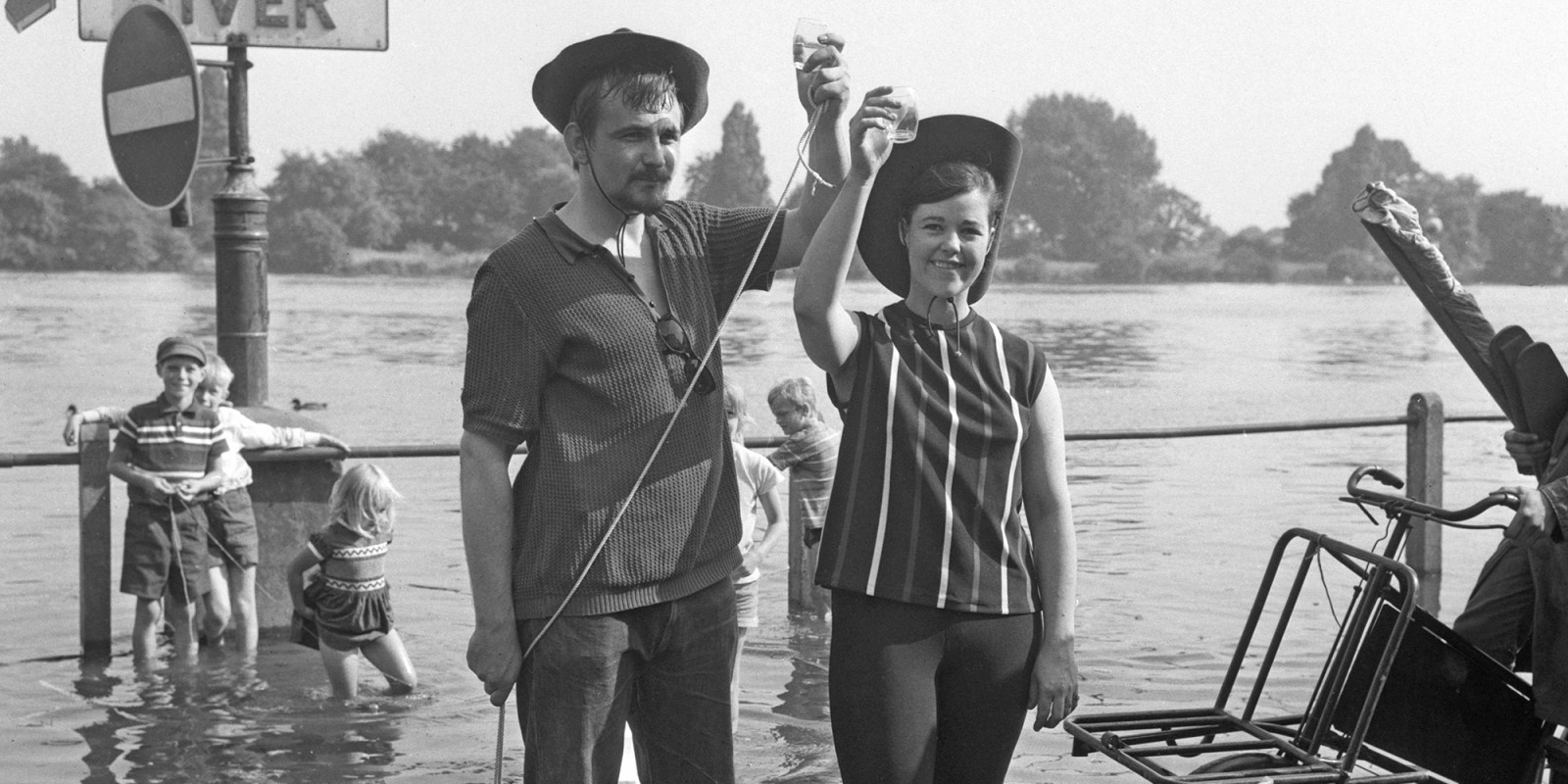 A wave from South African-born Terry and Barbara Bell as they prepare to launch their 5m fibre-glass canoe Amandla on the River Thames at Chiswick, London, at the start of their 11,200km journey to Dar es Salaam, Tanzania.

The great 11,000km kayak venture of 1967 began as a comedy of errors, and, with hindsight, many of the elements of farce came close to tragedy. But there were also some incredibly interesting, insightful, even uplifting, events along some 1,500km of sea, canals and rivers before, after nearly three months, we arrived outside the magnificent walled Crusader city of Aigues-Mortes alongside the salt flats of the Camargue.

To say that, in August 1967, I was hopelessly ill-prepared to paddle a kayak along the upper reaches of the Thames, let alone out to sea, would be an understatement. Especially since I had no idea, when we started out, even quite how wide is the estuary of London’s great river. Nor, for that matter, how high are the swells at a spring tide. I think Barbara simply got carried away with my naive enthusiasm.

But I had done some hurried research and had bought all the right gear. I was confident that, by taking our time, we could learn as we went, and become proficient kayakers, masters of the ocean, let alone the rivers and canals of France that would take us to the Mediterranean. However, publicity killed any hope of being able — as I had optimistically planned — to ride the outgoing Thames tide into the Channel.

Publicity and the realisation of quite how incompetent we were soon put paid to any attempt to boldly sally forth. Instead, we ended up skulking along the shoreline with little help from the strong outgoing tide, getting stuck on oyster beds and then mud flats after inadvertently going a way up the Medway tributary as the tide turned.

We realised by nightfall on the first day of paddling that we needed a lot more practice. At least, having left behind the cameras and the crowds at the launch site, we both thought we could travel incognito, making our mistakes without attracting attention. But even before we got back on to the water on the second day, an excited local rushed up to us waving one of the daily newspapers. “You’re the ones going to Africa,” he shouted.

When we finally got out onto the water, paddling frantically away from the publicity on shore, one of the Thames tourist boats cruised by and a guide on a loudspeaker announced: “And there you see the young couple who are heading for Africa.” We promptly headed for the shore, to be hopefully out of sight of tour boats and the newspaper-reading public.

I had given us a week to get to Dover, thinking this would be more than enough time to get in lots of practice and learn how best to stow our supplies that included my portable typewriter, ream of paper, carbon paper, camera and film. I never gave much thought to the river, although I was aware that the tidal rise is up to 7m and the water can flow at some four knots (7km/h).

This seemed good news: we wouldn’t even have to paddle too strongly. On the two outgoing tides every day we would be whisked out past Whitstable and on to Margate and the sea. There we would take it easy, learn how to cope with the ocean and take time ashore to sort out any problems we might spot: it was pure fantasy.

Just how mistaken I had been in disregarding the river dawned on me when a group of Sea Scouts we met along the shore gave me a chart of the estuary (I told them I had forgotten mine). It revealed what my road map had not: that the mouth of the river, at its widest, is 29km across. And there seemed to be all sorts of low-water hazards in sticking close to shore.

So began an at least partially informed journey in the estuary area that included blundering across — and almost dislocating — a national catamaran race. We can still recall the loudspeaker screeching at us to “get out” and the shouts and gestures of annoyance from spectators on a grandstand erected on the stony beach on the Isle of Sheppey.

It took seven days to get out of the estuary and then into a wall of fog off Margate. We kept close to the chatting and music we could hear on the beaches, sometimes almost colliding with swimmers as we headed into what we later discovered were the treacherous waters and sandbanks of Pegwell Bay.

We made three discoveries there: 1. There is a bore that, as the tide turns, can — and did — sweep a kayak up the River Stour, once the Medieval waterway course to Canterbury; 2. There is (or was then) a nudist colony on the shores of Pegwell Bay; and 3. Knowledgeable, nude, canoeists know how to lead stranded kayakers through the sandbanks.

And so we arrived in Dover, slightly better prepared, a day late for a scheduled, fine-weather canoe crossing — and just as the weather turned. The fog lifted to be replaced by rain and gusting North Sea squalls. We found shelter in the boathouse of the Royal Marines, out of sight and, hopefully, out of mind.

On 2 September Barbara laid down the law: “If this weather doesn’t clear by my birthday (4 September) we’re taking the ferry to Calais.” In another example of how foolish it is to make decisions on pure speculation, I agreed. But the day came and the storm still raged. I begged. I pleaded. But I had agreed. The only consolation was that I had at least covered with tape the “London to Dar-es-Salaam 1967” boast on the side of the kayak.

In Calais, we camped for two days in a wind- and rain-lashed campsite overlooking the Channel. I knew I needed to get a carnet de passage, the official permission to, as a tourist, travel without payment through the hundreds of locks along the waterways of France. Nobody in the office asked what sort of vessel I commanded: given the weather, they probably thought I was some hardened seadog who had come across in the storm. So there was only one question: “Nom de bateau?” (name of boat?).

That was how the 5m glass fibre kayak, Amandla, became probably the first and perhaps the last such vessel to traverse waterways along with 250-ton steel barges. Neither Barbara nor I have forgotten the look on the face of the lock keeper when we turned up at the first lock on the Pas-de-Calais, asking to be let through. He told us very abruptly to wait for the barges.

Apart from having to learn how to deal in locks with the turbulence caused by barges and racing downstream on a 13km/h flow on the Rhône against ships coming upriver, it was a time to be enjoyed. But winter was clearly closing in as we paddled along the canal from Beaucaire and saw in front of us what looked like the set of a Cecil B DeMille film: the great walls of the Crusader city of Aigues-Mortes. The mayor, a communist, gave us permission to pitch our tent beside the battlements.

For the first time in nearly three months, we stopped long enough to get to meet and talk to other people. And, shortly after we arrived, we were also approached to crew a yacht on a “shake-down cruise” to the Caribbean and back. It seemed the perfect way to spend the already chilly winter. We would be back in the European spring to resume paddling.

So we played Lotto (Bingo) in the cafés, always hoping never to win because the prizes were inevitably two live chickens or ducks, their feet trussed together; were lent a shack in the nearby asparagus fields by a family who felt our tent was far too small; and enjoyed a Christmas feast aboard a motor yacht that a retired printer and his wife had swapped for their London home.

By then it was obvious that the yacht was going nowhere. The amount of vodka consumed by the skipper was also rather disconcerting, so I determined to press on: we had wasted enough time. It was the start of a lesson about the dangers of impatience. And it resulted in the probably inevitable mutiny of my partner and crew. But that was in Spain after another 500km or so of paddling and perhaps the scariest episode of the entire venture. DM