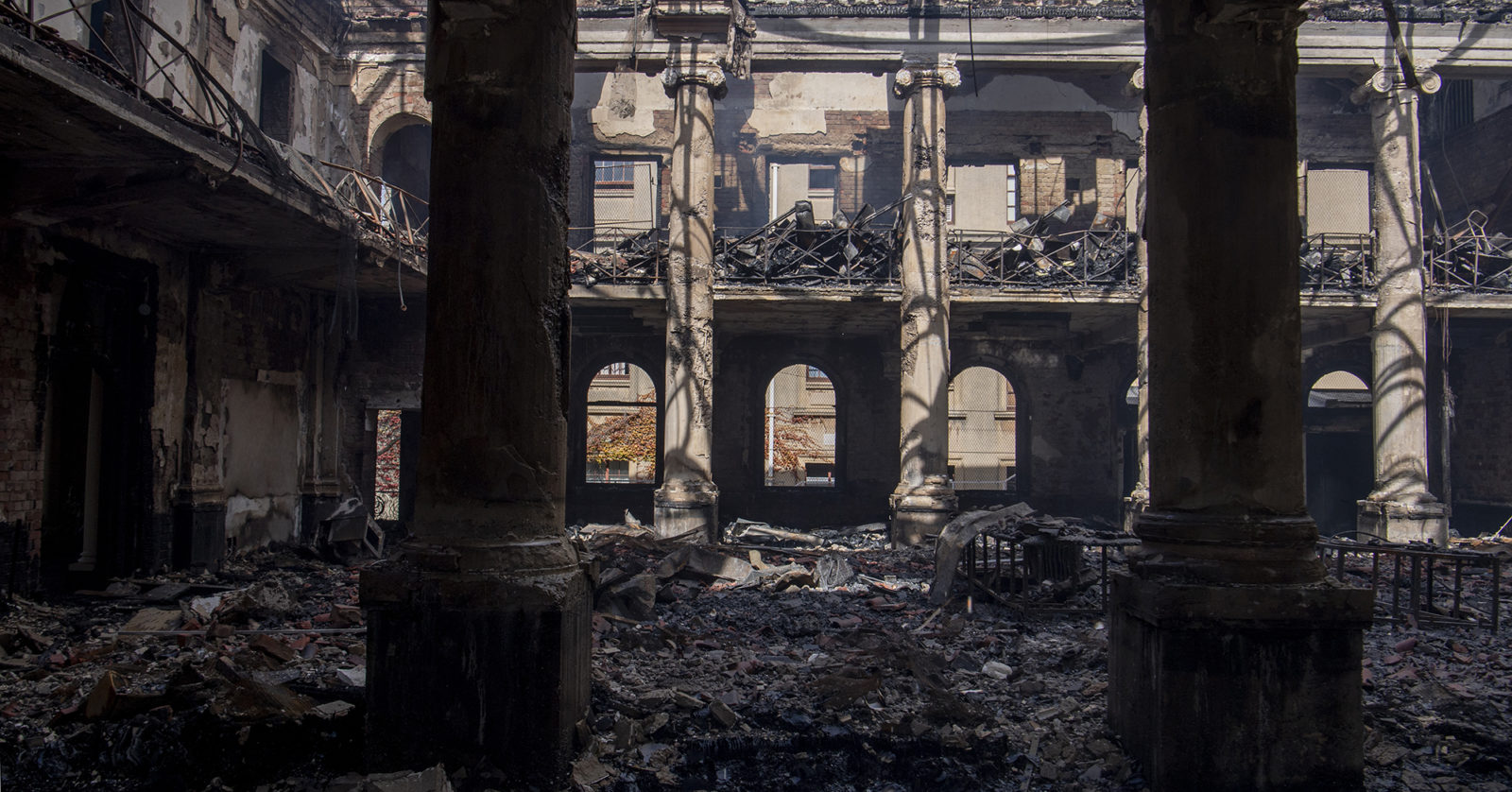 The fire that ripped across Table Mountain on Sunday 18 April 2021, devastated UCT’s Jagger Reading Room and African Studies Collection. The collection represented the dedication of generations of remarkable librarians and archivists, helped by generous benefactors. Together, they had built what was probably the continent’s premier collection of Africanist material.

Great library collections are the work of a succession of great librarians. The African “Special Collections” of the University of Cape Town, which suffered massive damage when fire gutted the Jagger Reading Room on Sunday 18 April 2021, represented the dedication of generations of remarkable librarians and archivists, helped by generous benefactors. Together, they built what was probably the continent’s premier collection of Africanist material.

The university – helped by volunteers – is now trying to salvage material that survived the fire. Though some of the material lost is irreplaceable, it is to be hoped that the university will commit to rebuilding the collections as much as that is possible. This will be aided by help from across the world. Many scholars who have in the past used the collections have already offered to assist. Such a project of rebuilding will be a small tribute to the people who built the collections that have now been destroyed.

The African Studies Library (ASL) appears to have been established as a discrete unit in the UCT library system in 1953. Some give credit to the vision of René Immelman, who served as University Librarian from 1935 to 1970. The ASL was linked to the School of African Studies, presided over by the great anthropologist, Professor Monica Wilson, until her retirement in 1973.

From the mid-1970s the ASL was transformed, thanks to the establishment of a Centre for African Studies with strong financial and personal support from UCT’s then Chancellor, mining magnate Harry Oppenheimer, and his family. Increased resources enabled a much bolder collection policy. Under the leadership of Margaret Richards, the collection expanded beyond “white” South African history, literature and politics to works on and by black South Africans.

Support from the Oppenheimer family also allowed for the expanded acquisition of material on other parts of Africa – and, importantly, material obtained from elsewhere in Africa. Special efforts were made to collect materials by African scholars, published in Africa. The collections expanded to include substantial holdings in languages other than English. Through being proactive, the librarians were able to acquire a vast amount of ephemeral material from a wide range of African countries. In such ways the collections were “decolonised” decades before younger scholars and students began to demand that the university be decolonised.

Many of the books and pamphlets in the library could only be obtained if librarians left Cape Town. In the early 2000s, encouraged by the then University Librarian Joan Rapp, Colin Darch conducted five trips across Africa and to Europe to obtain and bring back to UCT a vast amount of material not available in South Africa. Darch’s trips took him across southern, West and East Africa, including Francophone, Lusophone and Anglophone countries.

Each trip resulted in 500 or more new acquisitions to the collection. In 2008, the then ASL Head Librarian, Sandy Shell, attending a conference in Mauritius, used the opportunity to find and bring back about 100 books published locally. Through efforts like these, UCT was able to build up the best continent-wide book collection in Africa, all of which has now been lost.

In the African Film Collection, built primarily through the efforts of Sue Ogterop, were more than 3,000 films, both colonial-era and films made around or after independence, challenging colonial representations of Africa. The collection included classics from North Africa, such as Youssef Chahine’s Bab Al-Hadid (or Cairo Station), made in 1958, and French-language films, including the pioneering Afrique sur Seine made by Paulin Vieyra in Paris in 1955, at a time when African people in France’s colonies were prohibited from making films there. Some films were banned where they were made and had to be sent to Cape Town surreptitiously. A 2007 film on the Gukurahundi, banned in Zimbabwe, arrived in an envelope labelled “Auntie Flo’s home movies”.

The Audiovisual Archive dated from the mid-1980s, when photographers and filmmakers – including Cliff Bestall and Jimi Matthews, and later Liz Fish’s Community Video Education Trust, needed safe space to preserve footage of the struggle against apartheid. It included much primary footage of protest and resistance in South Africa and Namibia. The collection expanded with donations from many filmmakers (among others, Lindy Wilson and Mark Kaplan) as well as “amateur” collections of “home movies” of historical interest.

By 2021, the Audiovisual Archive included 20,000 items, many catalogued by Freddy Ogterop and, more recently, Bev Angus. It is hoped that much of this archive has survived the fire.

The Government Publications collection also suffered major damage in the fire. The expansion of the collection, which included major holdings of historical as well as more recent South African government documents, together with documents from other African countries, has for decades been the work of Laureen Rushby, working since 1985 out of a cupboard-like office in the heart of the library.

The ASL also housed more than 5,000 maps (as well as published atlases and hand-drawn maps in personal collections), a large number of political and other posters and, crucial for historical research, a vast archival collection. It is hoped that at least some of this may have survived. Some had been digitised.

Many others besides those mentioned already played crucial roles in building up the various collections. Librarians and archivists including Tanya Simons (Barben), Amanda Barrett, Margie Struthers, Lesley Hart, Clive Kirkwood and Busi Khangala were given support by senior figures in the university, such as deputy vice-chancellors Martin West, Martin Hall and Crain Soudien. A succession of library assistants fetched books from the maze of shelves.

Many people worked tirelessly to build up this great African resource over the past half-century. That it should be destroyed within a few hours is a calamity too great to find words adequately to describe. While we mourn its loss, we remember those who helped build UCT’s African collections, the jewel in the crown of the university, and generously made their rich resources accessible to scholars and students from around the world. DM

Jeremy Seekings is Professor of Political Studies and Sociology at the University of Cape Town. His most recent book, co-authored with Prof Nicoli Nattrass, is Poverty, Politics and Policy in South Africa (Jacana).

Chris Saunders is Emeritus Professor in Historical Studies at the University of Cape Town. His recent publications include Historical Dictionary of South Africa (3rd edition, with Peter Limb, 2020) and `Visions of Unity: Southern Africa and Liberation’ in Visions of African Unity (Palgrave Macmillan, 2020).