THE WILL OF THE PEOPLE 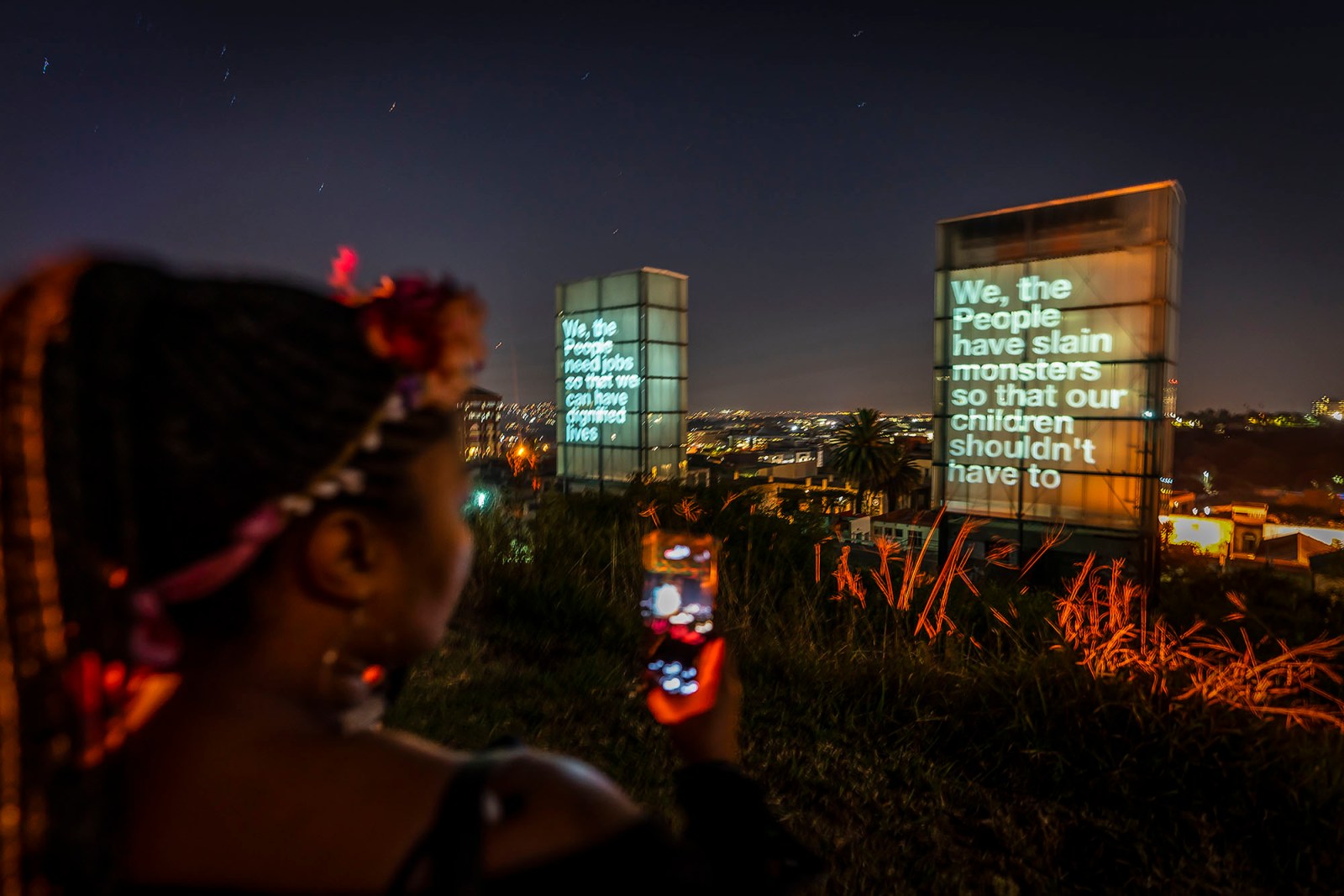 A guest takes cellphone photos as slogans are projected on to the three light towers at Constitutional Hill, which featured as part of the Willl of the People ceremony on the eve of Freedom Day. (Photo: Shiraaz Mohamed)

On the eve of Freedom Day, more than 250 declarations from across the country were projected on to the light towers of Constitution Square in Johannesburg. The declarations came with the rule of law in the country under threat, the campaign organisers explained.

The campaign, “The Will of the People”, called on those living in South Africa to send in personal declarations, ahead of Freedom Day, with a prompt linked to the first words of the preamble of the Constitution: “We the people”.

“[The messages] are about reaching out to the humanity in each other,” said Vanessa September, CEO of the Constitution Hill Trust, about the group’s campaign, which feeds into a wider national campaign, called “We, the People”, aimed at defending democracy.

The statements from families, workers, youngsters, citizens, reflected on the towers built on top of the staircases of the old awaiting-trial prison, which was demolished to make room for the Constitutional Court.

“WE THE PEOPLE converted the staircases of the Old Fort Prison into towers of light SO THAT all our people could live in the glow of human dignity, equality and freedom (Albie),” read one message last night.

“WE, THE PEOPLE say change the electoral system SO THAT we can hold our representatives accountable (Vanessa).

WE, THE PEOPLE [need] free hospital care SO THAT we can live to see a better South Africa (Yvonne).

WE, THE PEOPLE need to work together SO THAT our beautiful country can be prosperous (Njongo).

WE, THE PEOPLE need justice to prevail SO THAT woman can live in peace (Megan).

WE, THE PEOPLE of South Africa want to stop gender-based violence, rape, corruption and abuse SO THAT we can all be United as a country (Ndzalo).

WE, THE PEOPLE need to apologise for our past SO THAT we can build a future together (Laurence).

WE, THE PEOPLE need access to the Internet SO THAT we can amplify our voices (Kerry).

WE, THE PEOPLE have slain monsters SO THAT our children shouldn’t have to (Robbie).

ONS DIE MENSE van Suid Afrika moet hande vat en brue bou oor ou verdelings. Ons moet grondwetelike waardes verdiep ten einde ongelukheid uit te wis  SODAT almal kan deel in welvaard en voorspoed van ons land. [WE THE PEOPLE of South Africa must take hands and build bridges over past divisions. We must deepen our constitutional values SO THAT we can wipe out dissatisfaction for everyone to share in the prosperity of our county] (Leon).”

The campaign and its declarations come as the rule of law in the country is under threat, says September.

“There is a huge danger that the gap between what the Constitution promises — equality for all, respect for dignity, access to social and economic rights — and the lived reality of people’s lives, will delegitimise the Constitution and will be exploited by the unscrupulous to convince people to turn away from the Constitution,” said Pierre de Vos, head of the Department of Public Law at the University of Cape Town and the Claude Leon Foundation Chair in Constitutional Governance.

The past year was testament to this, with attacks on judges and the judiciary by the coalition of the implicated intensifying to try to discredit the entire legal system, De Vos said.

“The aim being to protect the implicated against the consequences of their corrupt and unlawful looting of the state,” he said.

“South Africans deserve a competent, honest and efficient government prepared to do what is necessary to better the lives of people,” De Vos added.“South Africans also deserve a criminal justice system that will hold the thieves and looters accountable. Sadly, without a fundamental realignment of politics, this is unlikely to happen.”

Last month, in an opinion piece published by Daily Maverick, lawyer and author Judith February called this out.

Indeed, Ma Joyce’s submission to the campaign that reads, “WE, THE PEOPLE emerged from a deeply divided past SO THAT our future should be founded on the recognition of human rights and democracy,” is in the firing line.

People went to the polls for the first time on 27 April 1994 with hopeful visions for what was to come.

“We want to remind people of the pact we made [on 27 April 1994] and the power that continues to reside within us to make further change happen.  We’d like to encourage people to renew the promise and the collective commitment of the Preamble,” said September.

“When we defend our democracy, we defend our homes, our livelihoods, our families, our communities, our own ambitions and that of future generations to come,” September said.

The idea is to provoke positive imaginings from the people to send a reminder that defending democracy is important, she said.

It is also about encouraging people to collectively declare their vision for a future South Africa.

A future South Africa that will likely rest in the hands of the country’s children with the likes of another message reading:

“WE, THE PEOPLE, say to the children eat your oats SO THAT you can be strong to grow and lead the country  (Amanda).”

The declarations will reflect on the towers in the evenings until 10 May. DM