Alexandria Ocasio-Cortez mobilising to save the planet and its people 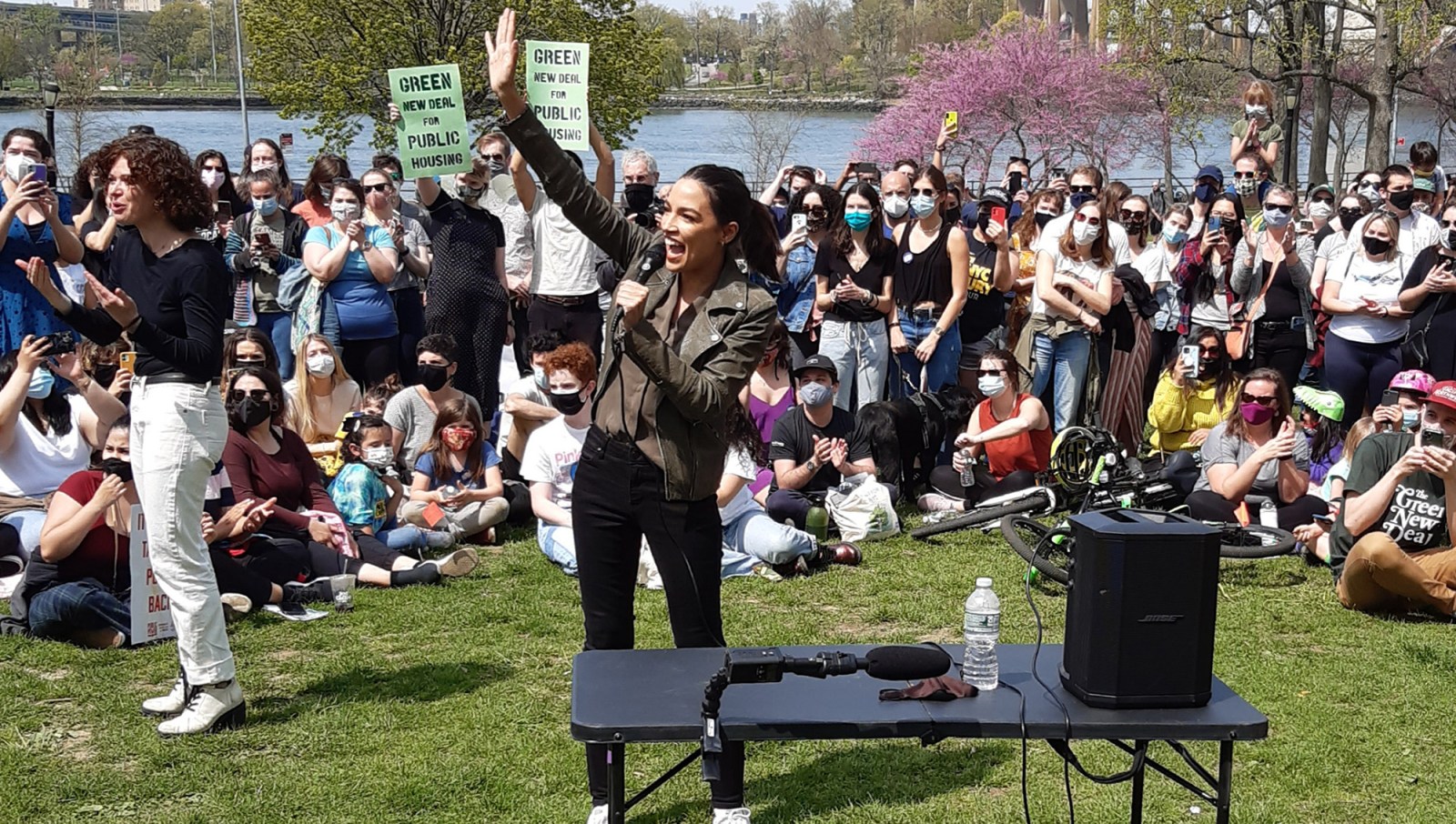 Alexandria Ocasio-Cortez waves as she greets supporters of the New Green Deal at an Earth Day celebration in New York's Astoria Park in Queens on Saturday 24 April (Photo: An Wentzel)

At an Earth Day celebration in New York on Saturday, Alexandria Ocasio-Cortez insists a Green New Deal must include jobs, healthcare and housing.

At its core, the Green New Deal pushed by Representative Ocasio-Cortez and others is a plan of national mobilisation. The plan would see the US fight the climate crisis and make specific strides which would save the climate and champion marginalised Americans and immigrants.

The resolution sets a goal of zero carbon emissions for the US, in the space of a decade. This goal is attached to and part of securing jobs – “20 million union jobs” – as well as affordable housing and healthcare for all Americans.

Representative Alexandria Ocasio-Cortez is welcomed with loud, excited cheers and people flock around her as she makes her way to a little clearing in the park to address the families who came out to celebrate Earth Day on Saturday 24 April.

The crowd gathered near the Robert F Kennedy bridge in Astoria Park in Queens, New York on this sunny, warm Saturday is culturally and racially diverse. Many have brought their young children along. All listen keenly.

Ocasio-Cortez is energetic, urgent and compelling. She speaks quickly and clearly, never still, her hands moving almost as fast as her lips – at least the hand that is not holding the microphone.

The event is a family afternoon in the park to celebrate Earth Day which was Tuesday 20 April, the same day on which US lawmakers led by Senator Ed Markey and Representative Ocasio-Cortez ‘formally revived their push for a Green New Deal’.

Ocasio-Cortez was running about 10 minutes late on Saturday, testament to the fact that New York traffic is returning to near prepandemic levels as summer takes hold and more people can be outdoors and are inoculated. People waited patiently for her to arrive, talking, listening to music, even reading.

Ocasio is staying true to her commitment made a few years ago when she and Senator Ed Markey introduced a framework of solutions for a Green New Deal which aimed to slash carbon emissions across industries nationwide while boosting the economy and creating jobs.

The resolution wants a carbon neutral US in 10 years – while not leaving behind marginalised communities including the poor, minority groups like Native Americans and the disabled.

Republicans against the Green New Deal say it will cause the economy to shed jobs rather than grow jobs, while analysts and climate crisis experts feel that the 10-year timeline is not achievable.

On Saturday, Ocasio-Cortez said of the resolution that “it addresses the systemic societal causes that keep us from getting there … we are going to prioritise them and put them first (marginalised communities)”.

Ocasio-Cortez finished her attendance with a meet and greet and selfies with the crowd, “but please kids first.”

Green New Deal support is growing and Ocasio-Cortez’s message is that it can work and that “it will be an all hands on deck approach and we refuse to leave any community behind in the process.”

Alexandria Ocasio-Cortez mobilising to save the planet and its people