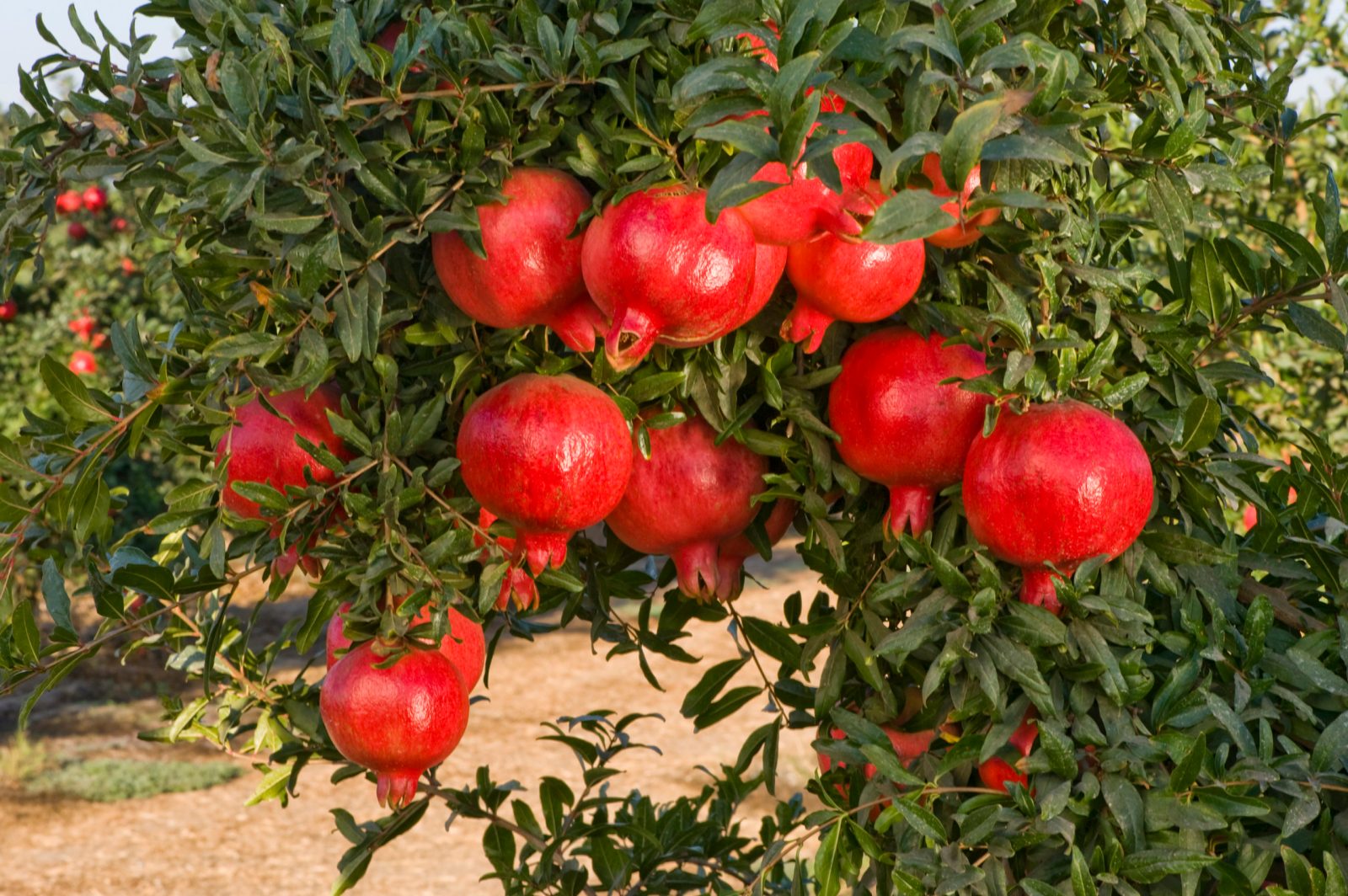 Angel Red pomegranate, a new variety that has soft seeds within the edible arils, and is large and red for its season; grown by Claude, Joel and Shane Atkins in Visalia, 9/21/10 © David Karp

The heart of the Klein Karoo has long been associated with farming ostriches and lucerne but Gerhard Meyer set about planting orchards of these fruit-bearing trees instead.

The writer supports New Living Hope in Retreat, Cape Town, which feeds children and the elderly.

Pomegranates have quite the history. It’s among the fruit Jesus “probably” ate, although the Bible is silent on this matter; it’s mentioned in passing in the old testament. In other mythologies, the pomegranate can symbolise fertility, beauty, eternal life, blood, death and power. So pretty versatile.

Some like to believe each pomegranate contains 613 seeds, which corresponds with the 613 commandments of the Torah, but I suspect this is not scientific. If anyone cares to crack open a lot of pomegranates and count the seeds, do let me know the outcome. In the story of Hades and Persephone, she ate just six of them, which let her live for six months of every year in the Kingdom of the Dead. We can assume she did so willingly because six of those little jewels certainly weren’t because she was hungry.

When Gerhard Meyer bought back his family farm near Oudtshoorn, he changed the name from Langverwacht – which he thought had negative connotations – to Celebratio, an altogether more uplifting title. Meyer’s grandparents had farmed ostriches and lucerne, like almost every farm in Oudtshoorn. When Oupa passed, his son, a school principal and later an inspector, did not want the farm; there were too many harsh memories of hardship and suffering to eke out a living. No thanks, he said.

The farm was sold to a neighbour who never married and never had children. When he in turn passed, there was an understanding the Meyer descendants would have the first option to buy. Meyer, at the time a Paarl businessman, decided he was ready for a new challenge.

“It must have been around 2006, because the first pomegranate trees were planted in 2008,” said Marita Meyer, adding that farming is not for sissies, something she realises every day. Especially during the long drought Oudtshoorn has been experiencing. “So many farmers have given up, and sold their ostriches. There aren’t many who can keep going without income during the years of drought,” she said.

The cost of “growing” an ostrich has been steadily increasing, making it difficult to turn a profit. Have you seen the price of ostrich meat in the supermarket? Then there are ostrich feathers which would have been destined for flamboyant headdresses at now non-existent carnivals and fiestas…

Meyer already knew he didn’t want to farm ostriches back then already; lucerne wasn’t an option either, in a drought-stricken region where farms are allocated water from two dams twice a year.  If there is water.

This was all before Google Maps so Meyer went to a professor at Stellenbosch University and asked him to find a place with a similar microclimate to Oudtshoorn’s. Turns out that place is the south of Israel. So off he went, to visit farmers there, who have some of the most expensive water in the world to farm with – desalinated. One of those farmers told him “son, as long as you plant bible fruits you can’t go wrong”.

So that’s what Meyer did.

It wasn’t that simple though. The soil analysis was bleak and brackish. Meyer is fond of challenges, as we can see, and believes everything will work out as long as a person has more plans. Trees were planted on ridges with probes in the soil to ensure the roots don’t reach that hostile soil. Meyer began on the worst part of the farm. Why? Because if it worked there, the rest would be easy – but not quite yet. He sank boreholes which returned salt levels at between 700 and 800 when they should ideally be 100. Two desalination plants were brought in which were intended to be for back up but who knew the drought would last this long? On the plus side, pomegranates use a mere 6,000m³ of water per hectare. As points of reference, lucerne uses 15,000m³, and citrus 10,000m³.

“We have to work smarter with the water we have,” said Meyer.

But we do love happy endings. Celebratio has secured a market in Europe and the Middle East for its export quality fruit, a cultivar called Wonderful, and local farmers are being encouraged to plant their own orchards. The hardy fruit loves the semi-desert climate with its hot days and cold nights, and rewards the Meyers with bright red orbs.

The best of those, brilliant in colour with no blemishes, are shipped off to be sold in supermarkets in Germany and Holland in their state of perfection. Those are export quality. Processed fruits are the ones that are maybe a little dappled with yellow or sunburn, or a scratch or two. Those make their way to Egypt where the seeds – arils – are removed and packaged for sale so cooks can sprinkle them over their couscous.

Then there are the juice pomegranates. These are, shame, the least attractive, or those that have burst open in the sun before the appointed harvest time (March until May). But even the not-so-pretty fruits have a purpose: In the packing house, Celebratio has a line of workers who score the pomegranates, break them open, and knock out the arils (613 per pomegranate perhaps). These are squeezed into juice, immediately frozen with no additives or preservatives, which is sold locally – from the farm, at health shops in George, via two agents in Cape Town’s northern suburbs and at Organic Living in Constantia Village. It’s labour intensive but a new machine was used this season and has made 3,000 bottles so far.

The juice is deliciously thick and sweet; a complimentary bottle is placed in the fridges of the two two-bedroom self-catering cottages and larger self-catering house on the farm. I’m told it’s excellent with gin, but teetotallers can dilute it with soda water or similar. It really is that sweet. Naturally I took mine neat at first, because that’s how I roll. Nostalgie restaurant in Oudtshoorn itself makes a cocktail it calls the Pom Pom, using Black Mountain gin from Grundheim, which is about half an hour away from Celebratio.

Besides the accommodation – the peace and quiet and the Milky Way above I can personally vouch for – there is a shop selling pomegranate-themed homeware, including aprons, cushions, table cloths, place mats, as well as bags from fabric designed especially for Celebratio. There are also some couches and chairs that have been covered in the fabric. Pre-Covid, musical concerts were popular and hopefully they will return, along with the plans to open a small coffee shop adjoining the packing room.

A fun story to finish: when brainstorming names for branding, pre-pandemic, the little crown on top of the pomegranate led to “corona” and then “Karoona”. Luckily Celebratio dodged that bullet and its pomegranates are, quite simply, Karoo Wonderful. DM/TGIFood