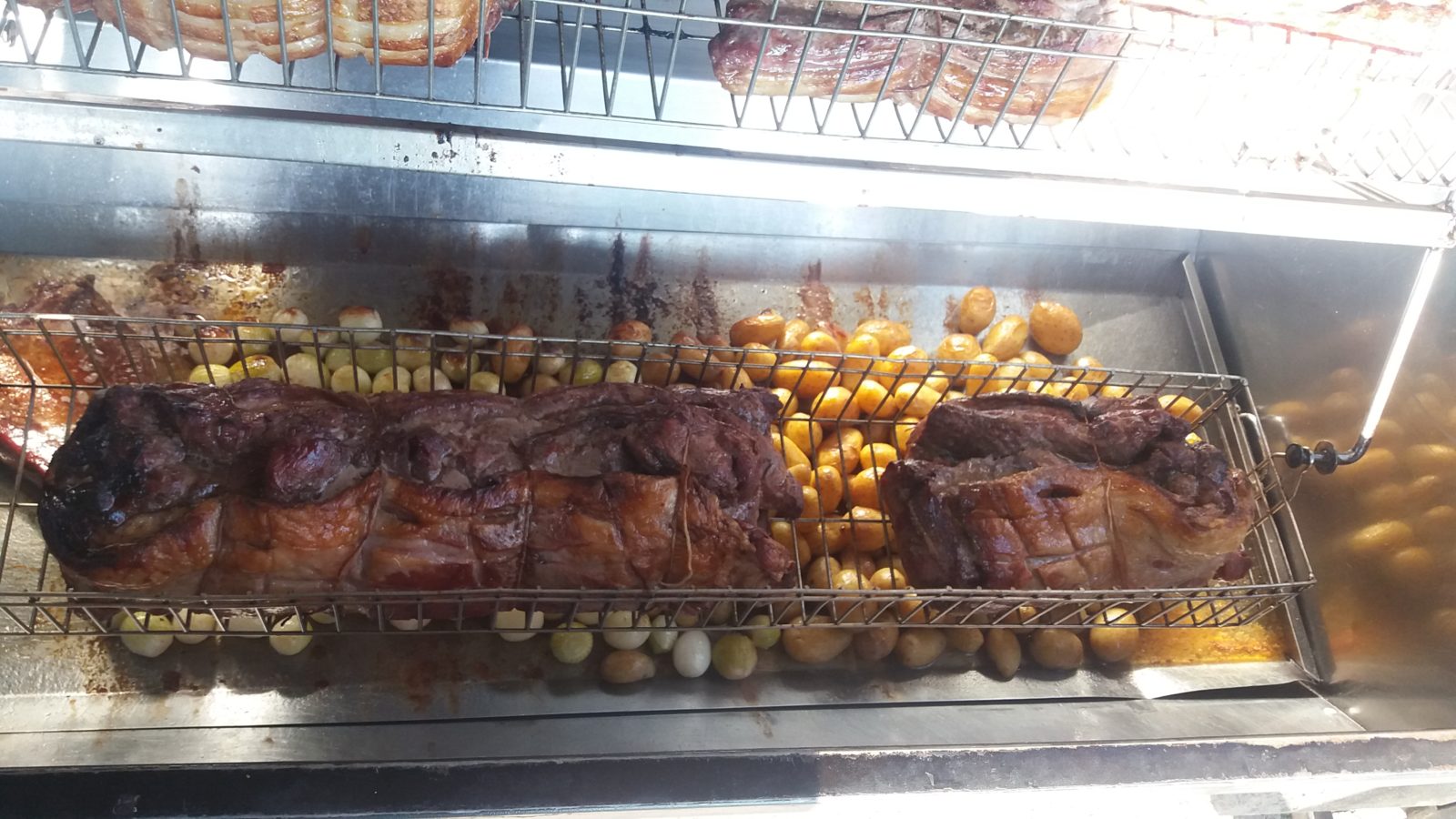 Custom made wire baskets made for the lamb roulades have a built-in tray where potatoes and other veg can roast while catching delicious drippings from the meat cooking on top. (Photo: Sias Bezuidenhout)

There are two key ingredients for a successful spitbraai, says Job Steenkamp. The first is good friends to keep you company while you’re stoking the coals and the second is good meat.

The writer supports the Victoria West community via the town’s Genadeland GF4GF Centre. Contact them on 071 268 0423.

For such born butchers, meat isn’t something to be squeamish about. Real butchers don’t wear gloves. They know and love the feel and the smell of good meat. They know the colour and grain of different animals and differently aged cuts. And they can get really passionate about cooking it.

Oom Job Steenkamp from Victoria West is such a butcher. And by “butcher” I don’t mean as in a vocation of wholesale meats to patrons. Oom Job is just a Karoo man who loves meat. He loves processing it himself, loves to cook it and loves to share it with others. He’s gained a reputation over the past 40-odd years as being the spitbraai King of the Karoo, and he can wax lyrical about the craft.

“I once spit an entire ox,” he tells me from their holiday home in Hartenbos. “Maar jy moet lekker pelle hê, anders is jy alleen in die voordag,” he warns. It’s no small feat. Simply put, the secret to doing a successful ox spit is having good friends. Good company means a reliable team to keep steady a 12-hour fire with hot coals. It also means good conversation in the wee hours, when the icy Karoo night is merciless. “But if you want to eat succulent beef for lunch, you need to start your ox at exactly midnight. That’s just how long it takes.”

South Africans are serious about their spitbraai, especially in the Karoo. Whole chunks or carcasses of meat are typically fastened on a rotating axle to cook over coals from a wood fire. The result not only feeds masses but also utilises all the cuts of meats that are typically served directly from the fire. Minimum effort for maximum reward and flavour. There are several spit masters in SA. Few, however, have as many years and successful spits behind their name as Oom Job Steenkamp. His meat of choice, however, isn’t beef. It’s Karoo lamb.

“Nothing equals or rivals Karoo lamb. And you can tell me nothing; the lamb from Victoria West side of the Karoo is the best in the country.” He’s not wrong. Lamb from Victoria West tastes different to the lamb from Carnarvon or Jansenville or any other Karoo town. Just as terroir and elevation in the Winelands affect the taste and texture of the wine, so too is the taste and texture of Karoo lamb influenced by the elements of the micro-region they’re produced in. And just like Oom Job, every local believes their specific region is the best.

If Oom Job says Victoria West lamb is the best, I’m willing to take his word for it. He has been doing his famous spitbraais since moving to Victoria West from Calvinia – from one Karoo lamb producing hub to another – with his wife Stia in 1980.

“I first learnt spitbraaing from a Victoria West man, Tyre van Heerden. He used to do the traditional spit where you open up the whole carcass and secure it with a wire for turning over the coals. Sadly, Tyre suffers from Alzheimer’s disease these days, but I like to think that his legacy is maintained.”

Over the years, Oom Job has developed his own signature style for doing a lamb spit. His secret is to debone the whole lamb beforehand, season it and then roll it up into a neat roulade to be spitbraaied – rotisserie-style – over the coals. Almost like the Italian porchetta, but without any stuffing and not too many spices.

“Karoo Lamb is already spiced by the veld,” Oom Job insists. “You can add salt, and maybe a squeeze of lemon towards the end, but that’s it. Plus the flavour of a real wood fire, there’s no need for extra flavours to compete. Spices burn over the coals in any case.” The result of this deboned and unadulterated Karoo lamb spitbraai roll is a much juicier spit where the outer layer – which is always the fattiest part of the animal – creates a crispy crust.

To debone a whole lamb can be tricky, so local Victoria West meatman Sias Bezuidenhout helps out whenever possible. “You start by removing the shanks and neck and then make an incision along both sides of the spine, carefully trimming the meat from the bone,” Oom Job says. “The trick is to take your time and stay as close to the bone as possible. At the hindquarters, you follow the bone right to the edge of the shank and then butterfly the chunky parts to cook evenly.

In the end, you can remove the whole carcass and roll up the precious meat into two neat roulades that have been well-seasoned, unlike with a traditional spit where seasoning can only take place afterwards. The lamb rolls are spitbraaied in custom-made wire baskets that rotate over the coals, similar to those rotisserie chickens,” Oom Job explains.

“For an 18kg lamb, you need roughly three hours for it to cook to perfection. And the coals must be hot. Any spit likes maximum coals in the beginning, to seal the meat and to heat it throughout in the fastest time possible. The sooner you can get the internal temperature up, the better. Spitting the rolls takes the same amount of time for an open carcass spit, but the result is much better.” No more dry bits across the ribs or under-cooked and under-seasoned sections at the rear, and everything is ready at once to feed the hungry crowds.

Above all, Oom Job loves sharing. “He’s a true legend of Victoria West,” says local townsman André Bester. “He won’t tell you this, but he regularly cooks for the kids living by the landfill and for the people who are struggling in our community. He would just drop by and deliver a delicious home-cooked meal, no questions asked. He has such a big heart. He loves to cook and he really loves people.”

Oom Job turned 70 in February and he’s as passionate as ever about the food and the people of his Karoo home. Whether it be for a local event spit… “We do a golf classic every year where we spit five or six lambs at a time. Also at all the boereverenigings and agri-shows, there’s always a spitbraai going,” he boasts. Or just for a regular Sunday get-together… “We’re about three or four households in the Victoria West area that eat together every Sunday. We roasted a whole leg of lamb in my friend Henry Schoeman’s pizza oven the other day. It was wonderful. And Johan van Drieten makes the best afval you’ll ever taste. Even the dominee cooks. You should definitely drive over for a visit. Dit gaan lekker hier.”

Oom Job’s secret is simple. “Jy moet lekker pelle hê, anders is jy alleen in die voordag.” It seems as good a secret to making a spit as it is to live a good life; to surround yourself with people who can keep you going, people who can help stoke the fires when the night is cold and give a word of encouragement when it seems as if daybreak may never come. First and foremost, the secret is to be such a pel to the people around you.

Mix together the dry spices and use liberally on lamb. Squeeze over lemon right at the end, before serving. DM/TGIFood